Tamil Nadu government has declared the final resting place of former chief minister of the state as a monument. Lakhs of people have already visited Jayalalitha Memorial within a few days from the date of funeral of their beloved "Amma".

A memorial is planned at this place to pay homage to Jayalalitha. Several government officials and famous architects have already visited this place multiple times to propose the design and architecture for the proposed Jayalalatiha Memorial. The land at the proposed Jayalalitha Memorial is owned by The Public Works Department of Tamil Nadu. They will construct the monument adjacent to the MGR's memorial. 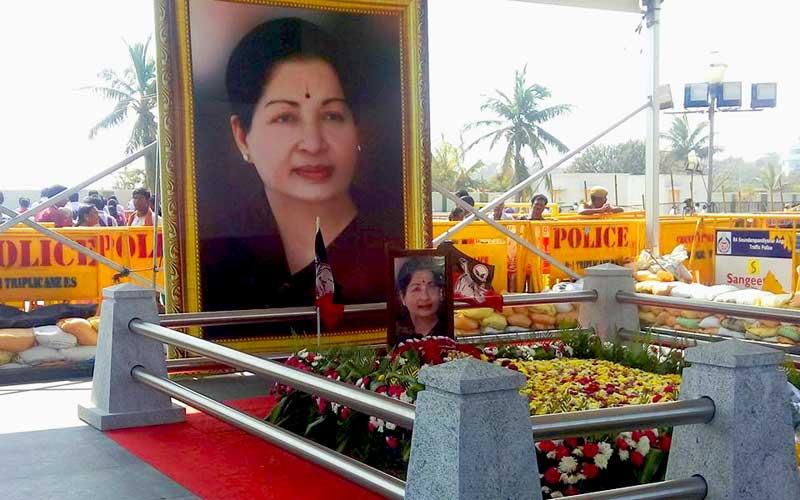 There is a huge rush to visit and pay homage to the beloved leader of the state. According to the reports, about 5 Lakhs people visited the place on a single day just after the burial. Shelters, comfort station and other facilities are yet to be built here. If you are planning to visit Chennai only to visit this place, it is recommended to wait a few weeks until the authorities make convenient arrangements for the visitors.

There will be no constraints for any visitors in terms of the availability of food and accommodations irrespective to their taste and expectation in the nearby location.

Jayalalitha Memorial is planned next to the "Anna Samadhi" and "MGR Memorial" at Marina beach, Chennai. Hundreds of visitors pay home page at the monuments of Anna and MGR at Marina beach. A lot more visitors are expected at the samadhi of Jayalalitha since she has a huge number of followers in the state. Being a highly influential leader with a lot more followers, Government wants to make sure the samadhi of Jayalalitha gets the respect it deserves.

Metro train: Marina beach is easily accessible by metro train from various parts of Chennai. Get down at Marina beach and walk about 400 metres to reach Jayalalitha Samadhi.

For the visitors who are from the other states can be easily reach this destination through the following ways:

1. MGR Memorial - (located next to Jayalalitha Memorial) which is constructed in the memory of the former Chief Minister of Tamil Nadu, Mr. MG Ramachandran. The area is spread across 8.25 acres. The Memorial was built in 1998 and inaugurated by his wife Janaki Ramachandran.

2. Anna Samadhi - (located next to MGR Memorial) also known as Anna Memorial which is built in the memory of one of the former Chief Ministers of Tamil Nadu, Mr. C N Annadurai. Towards the northern end of the memorial, there is a museum on Mr. Annadurai.

3. Marina Beach - Jayalalitha's Memorial is located right on the Marina beach. So you can walk around the beach. There is a very nice walkway along the beach through which you can comfortably for a couple of miles and it goes up to Light House, another attraction near Jayalalitha Memorial.

5. Chepauk palace - Located 650 m away from the memorial. It is the residence of Nawab of Arcot from 1768 to 1855. The place has two blocks North and South called Kalsa Mahal and Humayun Mahal respectively. The area spread over 117 acres and surrounded by a wall.

6. San Thome Basilica - This is a popular Christian pilgrim place near Marina beach which was built by Portuguese in the 16th century over the tomb of St. Thomas one of the disciples of Jesus and it was rebuild by British with the status of cathedral.

In addition to the followers of Amma from the entire state, a lot of foreign tourists are also visiting the burial place of the great leader for whom the entire state is mourning. In the coming weeks, a lot of infrastructures is expected to be built in and around Jayalalitha samadhi for the convenience of the visitors.