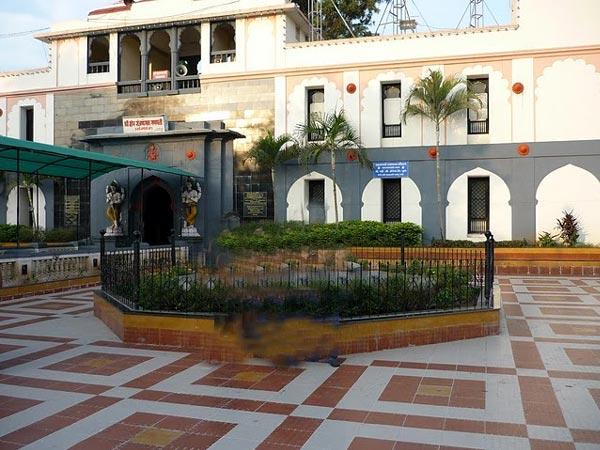 The Mahaganapathi Vinayak temple is the eighth and last Ganesha temple to be visited during the Asthavinayak Darshan tour. This temple is located at Ranjangaon in Shirur taluk in Pune district and is 55 Kms. away from Pune city in Maharashtra.

About Mahaganapathi Vinayak temple at Ranjangaon 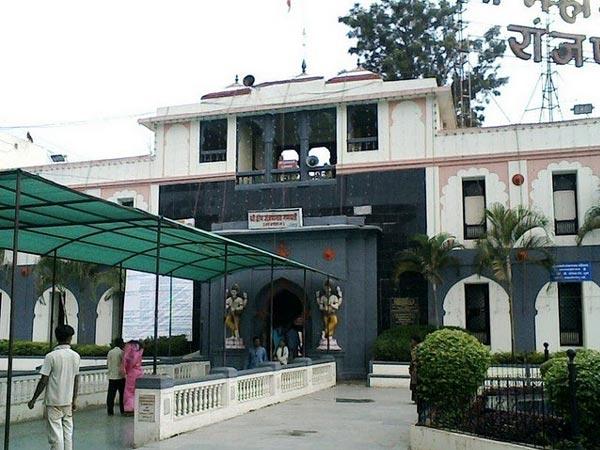 Mahaganapathi Vinayak temple at Ranjangaon is considered to be one of the Ashta Vinayak shrines of Maharashtra, celebrating eight instances of legends related to Ganesha. In this shrine of Asthavinayak, It is believed that Shiva worshipped Ganesha at this place before fighting the demon Tripurasura. The temple was built by Shiva where he worshipped Ganesha, and the town he set up was called as Manipur which is now known as Ranjangaon. The Maha Ganpati at Ashtavinayak is considered as the most powerful representation of Lord Ganesha. Maha Ganpati of Asthavinayak is depicted as having eight, ten or twelve arms.

The temple of Maha Ganapathi has a beautiful main gate which is guarded by two statues of Jay and Vijay. The Nagarkhana is situated above the main entrance gate which was inaugurated by Maharashtra's honourable chief minister Shri Manoher Joshi in the year 1997. The temple is designed in such away that during Dakshinayan the rays of the sun fall directly on the deity. We can see old temple pillars in the temple compound of Maha Ganapathi Vinayak temple. 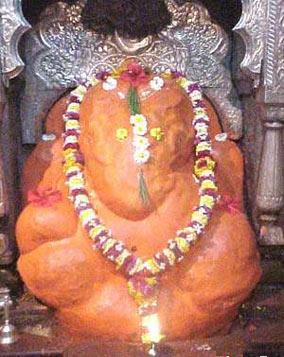 The idol of Maha Ganapathi Vinayak at Ranjangaon

The idol of Maha Ganapathi Vinayak is facing east direction and is seated in cross - legged position with a broad forehead, with his trunk pointing towards left side. This idol is swayambhu i.e. self incarnated. It is said that the original idol is hidden in the basement, having 10 trunks and 20 hands and is called Mahotkat, how ever, the temple authorities deny any existence of such idol. We can see Riddhi & Siddhi on the sides of Mahaganapati.

Tripurasur is the son of Sage Gritsamad. One fine day this sage sneezed and a boy was created from this whom he brought up as son. Sage taught the boy the Ganesha mantra. This boy meditated very intensely on Lord Ganesha who blessed him and was given three pura-s of gold silver and iron. Since he was the owner of these three pura-s, he was given the name of Tripura. Lord Ganesh blessed him that he will be powerful and only Lord Shiva can destroy him and after being destroyed by Lord Shiva, he would attain the salvation. So Tripura was proud due to this boon and started troubling the entire world. He conquered all the worlds and started to conquer the heaven. He was so aggressive that even Lord Brahma had to hide in a lotus and Lord Vishnu in the Kshirsagar. He conquered even Lord Shiva's Kailash parvat and so became the king of all the three worlds. Narada advised gods to medidate on Lord Ganesha. So Ganesha decided to help the gods to conquer Tripura.

Lord Ganesha then disguised as brahmin and visited Tripurasur and told him that he was a Brahmin and could make for him three flying planes. Riding these he would make him to go anywhere he wished within minutes. The planes can only be destroyed by Shiva. Lord Ganesh in return asked him to get the statue of Chintamani which was at Kailash Mountain. Tripurasura tried to get it from Kailash Mountain but Lord Shiva refused to give the statue to him. Then Tripurasura got angry and he started fighting with Lord Shiva to get the statue. He destroyed everything that belonged to the Lord Shiva.

The Maha Ganapathi Vinayak temple is open from 5:30 AM to 10:00 AM. The Devotees can offer pujas like Abhishek, Sahastravartan and Satya Vinayak Puja which cost Rs.11/-, Rs.101/- and Rs.51/- respectively. The temple trust also arranges for the Prasad to be sent to devotees. 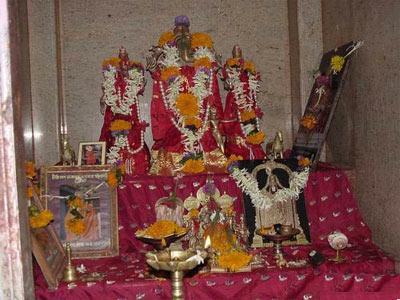 In the month of Bhadrapad, a festival of six days is celebrated from the Pratipada to the Sashti, that is from the first to the sixth of the waxing period of the month. There is a "Mahaprasad" on fifth day which is a big offering to Lord Maha Ganapati. The Deity's palki procession is conducted on these days. Other celebrations like wrestling matches are also conducted.