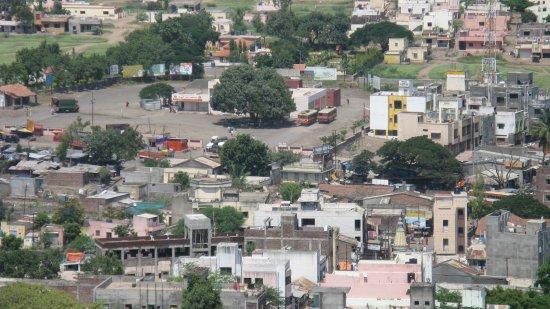 Jejuri is a city in Pune district in Maharashtra State. Jejuri is famous for the Khandoba Temple. This place is popularly known as 'Khandobachi jejuri' is the temple of Lord Khandoba. Jejuri is to he south-east of Pune city towards Phaltan.

Jejuri is one the popular pilgrim centres of Maharashtra, located 38-km from Pune and 60-km from Sholapur. There is a temple dedicated to Lord Khandoba at jejuri. Khandoba, popularly known as Khandobachi Jejuri, is one of the important Gods worshipped by Dhangar, the oldest tribes in Maharashtra. It is believed that Khandoba, is a god of Sakamabhakti i.e. it God who fulfils all the desires of his devotees.

Jejuri is located at a height of 2355 feet above sea level. The Khandoba temple is located on the top of a small hill and you have to climb almost 200 steps. But the climbing is not so tough. 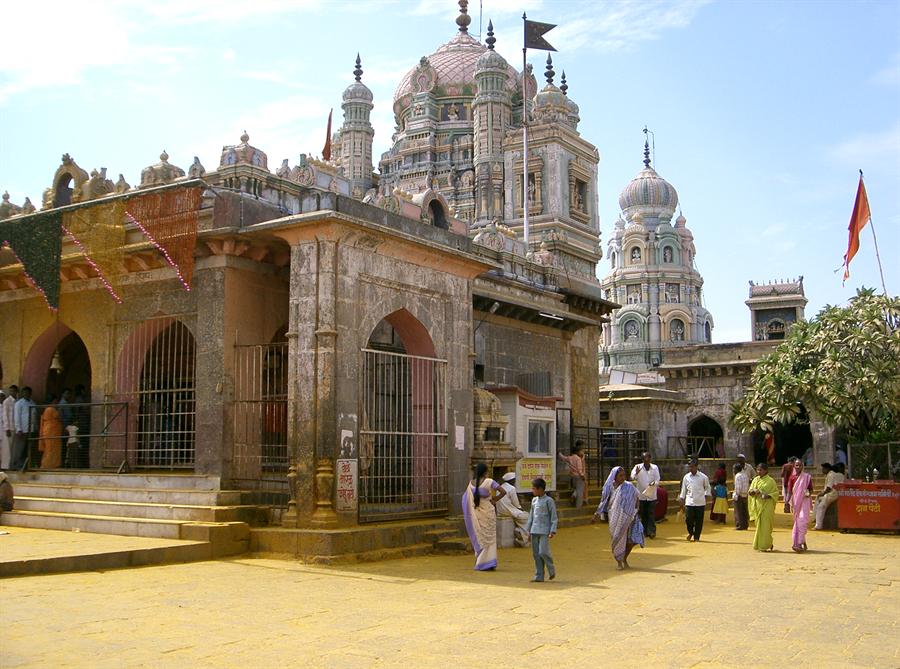 Jejuri is one of the famous temples of Maharashtra. This place is popularly known as 'Khandobachi Jejuri'. The temple of Khandoba at Jejuri is located on the top of a small hill. You need to climb almost 200 steps to reach the temple.

Jejuri Town is located in Purandar taluk, a station on the southern railway meter-guage like between Pune and Bangalore. Jejuri is a famous pilgrimage place. Jejuri is more a village than a town and is important due to the religious fairs held here in honour of Lord Khandoba. Khandoba has two temples at Jejuri. One of them is older than the other. The new one is larger and stands close to and about 250 feet above the village. The small temple is believed to be sacred.

The idol of Khandoba in the temple is very beautiful. Various weapons like Sword , Damaru and Paral are of historic significance. The competition of handling the sword on Dasera Day is very popular at Jejuri because one has to lift the sword high for maximum time. The other idols of Khandoba , Mhalsa and Manimalla looks beautiful. You must visit Jejuri to see the crystal stands. Jejuri is one of the important temples in Maharashtra with historical importance. ' Kandobacha Yelkot '..' Jay Malhar ' are some of the popular terms here. One can find many sculptures in and nearby the Jejuri temple. 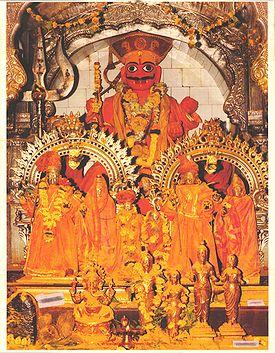 Let us see the story of Jejuri temple now. The Khandoba templ was built on a hill top with a fort around. The heroes were the bees and the villain was Aurangazeb. We can see a small niche housing a sivalinga and it is called as Savalaksha Bhunga, meaning that a bee worth a lakh and a quarter of coins. The story begins with Aurangazeb raiding the temple during one of his campaigns when he conquered another fort, Daulat Mangal Fort which is near to this place. He saw the Jejuri fort (which was enclosing the temple) after conquering Daulat Mangal fort. He wanted to conquer the Jejuri Fort. He reached with his army to this fort but found that sturdy gates were closed. So he wanted to break the walls of the fort and come inside. He then ordered to make a hole in the wall by putting a dynamite exactly at the place where the Savalaksha Bhunga lies now. Does Khandoba like this kind of thing to happen? No. Suddenly there emerged from the hole lot of honey bees one after the other in quick succession. The honey bees attached the army of Aurangazeb with great noise covering each soldier's body completely. So the soldiers told about this to Aurangazeb. Aurangazeb was copletely paralyzed. Then one of the Hindu solder told him that Lord Khandoba is very powerful and ever vigilant to protect his devotees. He then suggested that by appearing in front of him alone, the trouble would be removed.

So Aurangazeb order at once an offering of One lakh and a quarter coins to God Khandoba. When the offering was made, the honey bees disappeared soon. So Aurangazeb did not know how it happened, but realized that God was so powerful and bowed down in front of Khandoba.