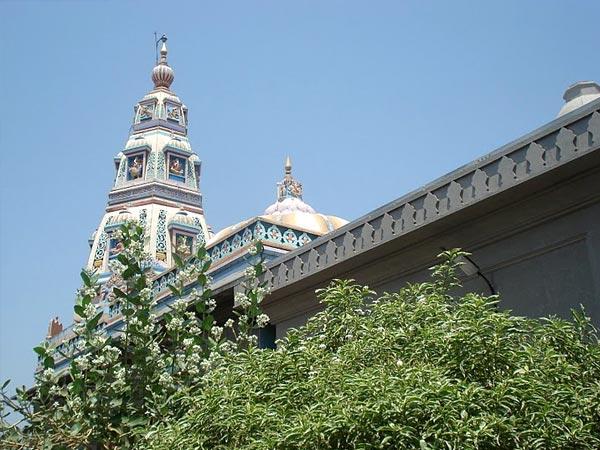 The Vighneshwar Vinayak Temple is the seventh Ganesha Temple to be visited during the Asthaviyanak Darshan Tour. Ozhar is situated at a distance of 9 Kms. away from Narayangaon on Pune-Nasik high way road. Ozhar is located in Junnar taluk of Pune District of Maharashtra on the banks of the Kukadi river.

There are eight temples of Lord Ganesha near Pune which are called as Asthavinayak Temples. A number of tour packages are arranged from Pune and Mumbai and many other cities in Maharashtra to visit these eight temples popularly called as Asthavinayak Darshan or Asthavinayak yatra. Visiting these Asthavinayak temples near Pune in a particular sequence and in one trip is considered as a great pilgrimage worthy to fulfill all your desires and wash off the sins. The seventh of these eight asthavinayak temples to be visited is the Vighneshwara Vinayak Temple at Ozhar in Pune District.

Vighneshwar Vinayak Temple at Ozhar is considered to be one of the Ashta Vinayak shrines of Maharashtra, celebrating eight instances of legends related to Ganesha. Ozhar is located in Junnar Taluka of Pune District at a distance of 9 Kms. from NarayanGaon. Ozhar is at a distance of 85 Kms. from Pune city. 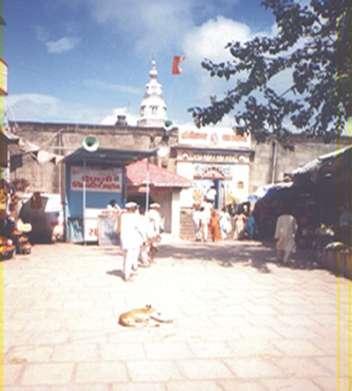 Ozar in the Maharashtra depicts Ganapati as Deity Vighneshwar who finished the trouble of the demon Vighnasura. The Vighneshwar Viayak temple is enclosed on all the four sides by high stone walls, and its pinnacle is made of Gold. The temple is located on the banks of Kukadi River. The Ganesh at this temple is called as Shri Vighneshwar Vinayak.

The temple of Vighneshwar Vinayak at Ozhar faces east and is surrounded by a thick stone wall. You can even walk on the wall. tanding on this boundary one can see the Lenyadri Mountain where Lord Girijatmaj resides and the Shivneri fort, a historic fort belonging to Shivaji the Maratha King. The main hall of this temple is about 20 feet long and the inner hall is 10 feet long. The temple top is Golden and is possibly built by Chimaji Appa after defeating the Portuguese rulers of Vasai and Sashti. The temple was built around 1785 AD.

At the entrance of the Vighneshwar Vinayak temple, we can see two statues of guards who protect the temple. On entering one can see two overris [rooms used for meditation]. The SabhaMandap is 20 feet long and in it is a marble statue of the mooshak[a mouse]- Lord Ganesh's means of conveyance. All the walls of the temple are covered with attractive and colourful pictures. In the garbhagriha, the sanctum resides the deity. The deity is also facing east and is seated. On both sides of the deity are brass statues of Riddhi and Siddhi. 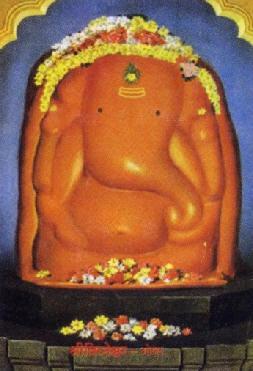 The idol of Vighneshwar Vinayak at Ozhar faces east and his trunk is turned towards left side. The idol which is smeared in vermillion mixed with oil, has two emerald studded eyes and a diamond is there on the forehead and in the navel. We can see brass idols of Riddhi and Siddhi on both sides of idol of Vighneshwar Vinayak. The temple has a golden dome and pinnacle.

A King called as Abhinandan wanted to become the king of Heaven. To achieve this goal he started a Yagna, a sacrifice. Indra, the king of Heaven heard of this and decided to create obstacles for the Yagna. He called Kalapurush and asked him to destroy the yagna. After doing all this Kalapurush acquired the name Vighnasura, the creator of obstacles. Vighnasura destroyed all vedic practices and religious acts on earth. All the people and sages pleaded for help. The gods realized that they had to destroy this demon Vighnasura and they turned to Ganesha for help, who was at the ashram of Sage Parashar. Then Ganesha took birth as the son of Parshwaputra and his wife Deepvatsala. He then fought violently with Vighnasura and defeated him. After getting defeated, the demon begged for mercy. Ganesha granted him plea, but on the condition that the demon should not enter the place where Ganesha worshipping is going on. Vighnasura accepted this on condition that Lord Ganesh be known by his name. So Lord Ganesh came to be known as Vighneshwar or Vighnaharta.

We need to reach Narayangaon on the Pune-Basik road after passing through Chakan, Rajgurunagar, Manchar. Later on we have to reach Junnar from Narayangaon. Ozhar is 8 Kms. from Junnar. You can take either Auto rickshaws or jeeps from Junnar to reach Ozhar. There is no bus service to Ozhar.

Eighth and the last temple to be visited as part of Ashtvinayak Darshan is Mahaganapati Temple.