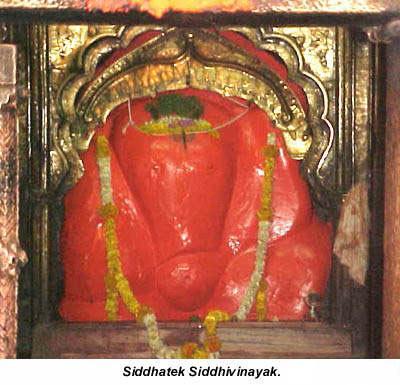 The Siddhivinayak Temple is the second Ganesha Temple to be visited during the AshtaVinayaka Temple Darshan. Shri Siddhi Vinayak temple at Siddhatek is considered to be one of the Ashta Vinayak shrines of Maharashtra, celebrating eight instances of legends related to Ganesha. The Siddhi vinayak temple is located at Siddhatek which is 20 Kms. away from Daund and 200 Kms. east of Pune city. The Siddhi Vinayak Temple is one of the renowned AshtaVinayaka Temples in Maharashtra and is situated off the Pune-Solapur highway at a distance of about 200 km east of Pune. 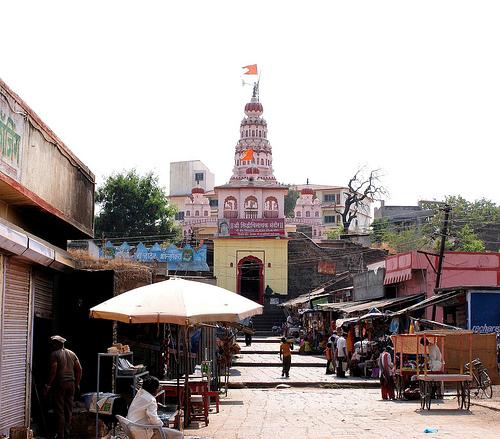 The Siddhavinayak temple is a hill temple of the asthavinayak temples which was built by Maharani Ahilyabai Holkar. She also rebuilt the Vishnu Pada temple at Gaya, Vishwanath temple at Varanasi and several other temples. Siddhatek is a small remote village in Ahmednagar district in Maharashtra. The Siddhivinayak Asthavinayak temple at Siddhatek is considered a very powerful deity. It is believed that this is the place where Lord Vishnu acquired Siddhi.

The Siddi Vinayak temple is situated next to the famous river Bhima. The amazing thing about this place is that this place is so silent that even the river Bhima dos not make any noise when flooded. The idol of Siddhi Vinayak at Siddhatek is swayambhu (self incarnated) and is in brass frame. We can see the brass idols of Jay and Vijay on both sides of Siddhi Vinayak. We can see a small temple of Goddess Shivai in the sanctum. This temple is under the control of Chinchwad Temple Trust.

While going towards Siddhivinayak temple after crossing river Bhima, you will see a place where Sage Vyas had performed Yagna(Sacrifices). It is believed that, years ago there was a heap of ashes from this sacrificial fire. The road which leads to the main temple of Siddhivinayak was built by Peshwa Senapati Haripant Phadke.

The Siddhivinayak temple is on the hill top and facing north direction. The Sanctum of the temple is fifteen feet high and ten feet broad was built by Maharani Ahilyabai Hokar. The Hall of the temple was previously built by a land lord of Baroda, Late Shri Mairal. It was later broken in the year 1939 and was rebuilt by all Ganesha devotees in the year 1970. The Nagarkhana on the main gate of this Asthavinayak temple was built in memory of Shree Haripant Phadke. To make one round (pradakshina) around the Siddhivinayak temple, one has to make the round trip of the hillock. This takes about 30 minutes with moderate speed. The idol of Ganesha in this temple is three feet high and two and half feet wide and facing north. The trunk of Lord Ganesh at this Asthavinayak temple is turned towards right and is considered to be the dynamic form of Ganesha.

The legend says that Siddhatek is a place where Lord Vishnu achieved Siddhi and thereby killed the demons Madhu and Kaitabha who were battling for thousand years. Long long ago Lord Brahma wanted to create Nature and for that he was chanting the alphabet "OM". Lord Ganesha was delighted with the penance and gave him the boon that he will fulfill the wish of creating Nature. When Lord Brahma was creating Nature, Lord Vishnu fell asleep. The demons Madhu and Kaitabh emerged from God Vishnu's ears. They started harassing all the Gods and Goddesses. Lord Brahma realized that only Vishnu will be able to kill these demons. Vishnu tried but could not kill them.

Vishnu tried his very best to kill them but failed. He then stopped the battle and took the form of Gandharva and started singing. Lord heard this singing by Vishnu and called Vishnu and Vishnu then told him about his unfinished battle with the demons. Shiva then advised him to recite the Shadakhar Mantra ( Om Ganeshaya Namah) and said he will wiln the battle. Lord Vishnu choose Siddhatek to complete this ritual of propitiating Ganesh. Ganesh then granted him his wish. Lord Vishnu then created a four-door temple on the hill and installed the statue of Ganesha. Since then Lord Vishnu achieved Siddhi and this place was called as Siddhtek or Shddhkshetra. Lord Brahma got the energy to create Nature with Lord Ganesha's boon. Lord Ganesha accepted the two daughters of Lord Brahma as his wives. The temple created by Lord Vishnu perished in the course of time. It is believed that a shepherd saw Lord Ganesh here and started worshipping him. He then found a priest to conduct the worship and ultimately it was during the rule of the Peshwas sometime that this temple was erected again.

.
The idol of SiddhaVinayak temple is swayambhu and is three feet tall. The idol of SiddhaVinayak temple is facing north and his trunk is turned towards right. The swayambhu idol of Shree Siddhivinayaka at Siddhatek is placed in brass frame. We can see Brass idols of Jay & Vijay placed on both sides of Siddhivinayaka. We can see Riddhi and Siddhi sitting on one lap of Vinayaka. The face of the idol is very calm. The Pradakshana (circimnavigation) of the Siddhavinayaka is said to be very fruitful. We have to travel around 5 km. to complete one Pradakshana as the idol is attached to the hill itself.

The Puja schedule at Siddhi Vinayak temple is given below:

On giving appropriate money, the temple poojari will perform Abhishek, Pooja and Sahastravartan. Prasad ad holy ashes are sent by post. The temple trust is now constructing a building for the purpose of devotees visiting this temple as a part of Asthavinayak Yatra. The rules for performing the Pooja at this Asthavinayak temple are observed strictly and the devotees are not allowed to perform the pooja personally.

There is a lodging and boarding facility available near the temple. The rate for single room for one day is Rs.75/- and Rs.251/- for a big hall. Shree Gajaanan Purohit who is an ancestral Poojari of this temple also arranges a very good lodging and boarding.

Reaching Siddhatek by bus or train

We can reach Siddhi Vinayak Temple either by bus or by a train. We need to get down at Daund or Boibel if we wish to travel by train to Siddhatek. From Daund or Boibel we can take the bus to reach the Siddi Vinayak temple.

Festivals are celebrated at Siddhi Vinayak Temple during the months of Bhadrapad and Magh from the Pratipada to Panchami of the waxing period of the moon. A procession of the Palki is carried out during these days after the Mahapuja and Mahabhog. This happens in the evening after 8 PM. Bhajans are also sung and Dhoop Aarti and Shej Aarti are also held. The Siddhi Vinayak temple at Siddhatek is visited by thousands of devotees during the festivals of Ganesh Chaturdhi, Vijaya Dashami and Somvati Amavasya.

Third temple to be visited as part of Ashtvinayak Darsh is, Ballaleshwar Vinayak Temple.

How much Asthavinayak yatra package from delhi? Where to stay? any travel attraction nearby Siddhivinayak temple