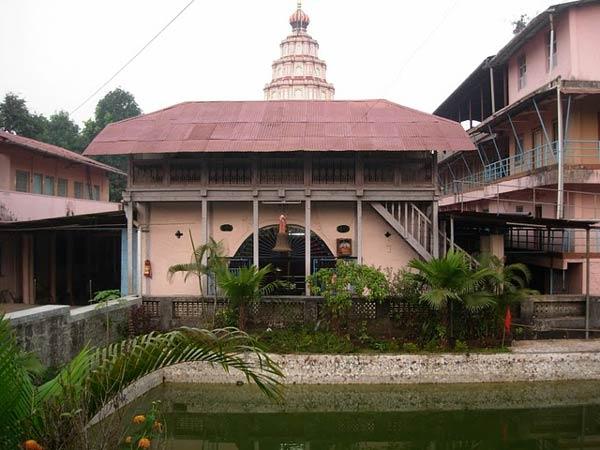 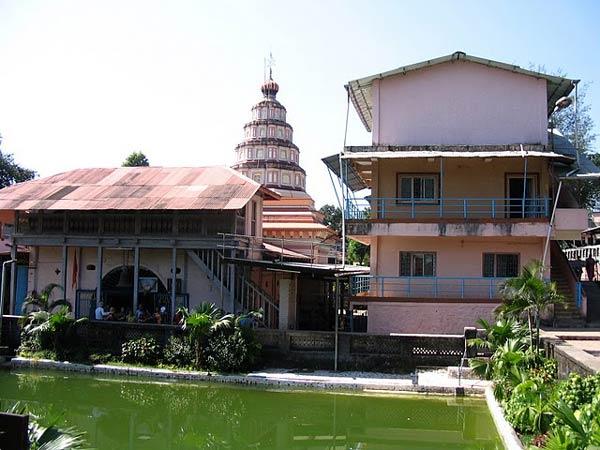 About Ballaleshwar Vinayak temple at Pali

Shri Ballalehwar Vinayak temple at Pali is considered to be one of the Ashta Vinayak shrines of Maharashtra, celebrating eight instances of legends related to Ganesha.

The original wooden temple was renovated in the year 1760 and a stone temple was designed by Shri Fadnis. This stone was carved in the shape of letter 'Shree' which was made by mixing lead with the cement during its construction. The temple is east facing and it was designed in such a way that during the Dakshinayan at sun-rise, the sun rays fall directly on the Vinayaka at this temple. The Ballaleshwar vinayak temple is built with stones which are stuck together very tightly using melted lead.

Two lakes can be seen on the two sides of the temple. One of them is reserved for the puja (worship) of the Deity. The Ballaleshwar Asthavinayak temple faces east and has to sanctums. The inner one has the idol of Lord Ballaleshwar and has a Mushika (Ganesha's vehicle, the rat) with modaka in his forepaws in front of it. The hall is supported by eight carved pillars. Inner sanctum is 15 feet tall and outer one is 12 feet tall. There is a huge bell that was brought back by Chimaji Appa after his defeat of the Portuguese in Vasai and Sasthi. The main hall of the temple is 40 feet long and 20 feet broad. It contains 8 pillars which resemble cyprus tree.

We can see the temple of Shri Dhundi Vinayak behind the Ballaleshwar vinayak temple which is west facing. This is a rare idol which faces west. It is believed that this idol was the same one which was thrown by Ballala's father while Ballala was worshipping it. 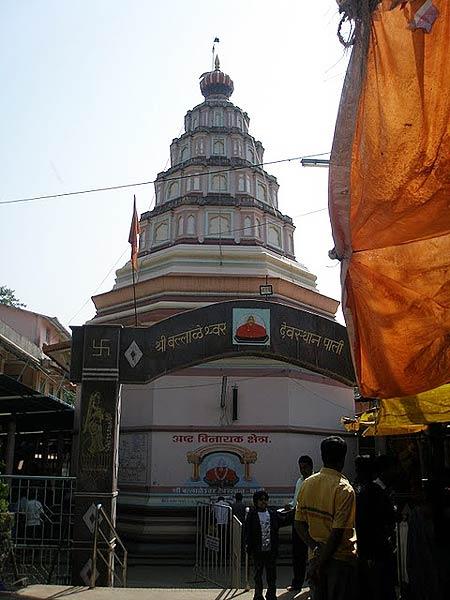 This is a story of Krita Yuga. There was a business man named Kalyan and his wife Indumathi in the village of Pali. They had a son Ballal who was a great devotee of Lord Ganesha. He used to worship Ganapathi along with his friends. One day the children saw a big stone at the out skirts of the village. At the insistence of Ballal, the children treated this stone as Lord Ganapathi and started worshiping it. They were so much deeply involved in the worship that they forget about their hunger and thirst and about day or night.

The parents of the children were waiting for them to come back. When the children did not return to their homes, all the parents went to Ballal's father Kalyan and complained about Ballal. Kalyan then became furious and took a stick in search of the children. He saw the children listening Ganesha purana and was furious and he broke the small temples built by the children in anger. He even beaten Ballal until he was bleeding. He tied him to a tree and thrown all the puja materials. He also threw away the big stone which was treated as Ganesha by children. He then threw the big stone. He said "Let me see which God protects you now" and went home. Ballal started cursing the people who has done all this.

Even though Ballal was affected by pain, hunger and thirst, he kept on chanting the name of Ganapathi till he fainted. Lord Ganesha was moved by the devotion of the child and appeared in the form of a Brahmin and touched him. Ballal's hunger and thirst were vanished, wounds were healed. He started worshiping the Brahmin and recognized him as Lord Ganesha. Ganapathi asked Ballal for a boon. Ballal asked him to stay at that place and remove the miseries of the people. Ganesh said, "I shall ever remain here in my part form, I will take your name before mine & be called as Ballal Vinayak." Then he embraced Ballal & vanished into the nearby stone. Then the stone's cracks disappeared and was whole again. That stone statue was called Ballaleshwar. The stone idol which Kalyan vaishya threw away is also called as Dhundi Vinayak. This is a swayambhoo Moorti. It is worshipped before Ballaleshwar is worshipped. 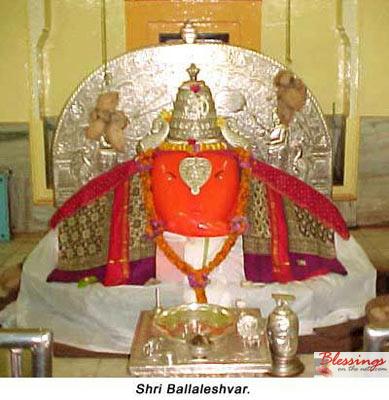 The idol of Ballaleshwar Vinayaka sits on a stone throne. This idol faces east and with its trunk turned towards left side. This idol sits against a background of silver which displays Buddhi and Siddhi waving the chamaras. We can see diamonds in the idol's eyes and navel. The idol of Shri Ballaleshwar s about 3 feet in height.

The Puja schedule at Ballaleshwar Vinayak temple is given below: 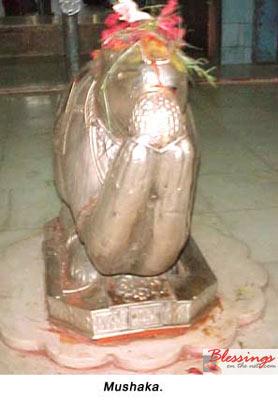 The doors of the Ballaleshwar temple are opened at 5 AM in the morning and the devotees can start worshiping the Lord Ballaleshwar from 5:30 AM onwards.
* The Kakad aarti and Panchopachari Puja are done by the priest at 5:00 AM
* Shodopachari Puja is conducted before 12:00 PM in the after noon.
* The Panchamriti Puja is conducted after sun set.
* The Dhoop Aarti is conducted at night
* The temple is closed for the devotees after the last puja and after this the deity takes rest.

On giving appropriate money, the temple poojari will perform Abhishek, Pooja and Sahastravartan. Devotees can offer the following Puja –s at the temple.

The festivals on these are celebrated for five days. Programs like Kirtans, religious discussions and other cultural activities are organized during these festivals. A Mahabhog is offered to the Ballaleshwar on Chaturthi day. According to a popular belief here, one can see the impression of God's fingers on the offerings. Thousands of devotees come and visit this miracle event on this day. Dahikala and Anna Samtarpan are carried out on Panchami.
On the third day of Magh month, a procession carries the Palki of the deity around the village.

Pali is in Sudhagad Taluk near to Nagothane. You can catch a bus at Alobag.
Pali is at a distance f 30 Kms. from Karjat. Pali is at a distance of 111 Kms. from Pune city. The route from Pune to Pali is given below:
Pune --> Lonavala --> Khopoli --> Pali. We can reach the temple only by road as there is no railway service available. It is possible to go to Pali fro Nagothane on Mumbai-Goa high way.


1. From Mumbai via Panvel & Khopoli, Pali is at a distance of 124 kms. Pali via-Panvel-Pen-Wadkhal-Nagothane & wakhen is at distance of 120 kms.

Fourth temple to be visited as part of Ashtvinayak Darshan tour is, Varadavinayak Temple.