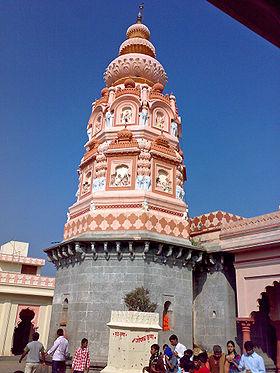 The Mayureshwar Temple is the first Ganesha Temple to be visited during the Asthavinayak Darshan tour. Mayureshwar is located at Moregaon village on the banks of river Karha which is 64 Kms. south east of Pune city.

There are eight temples of Lord Ganesha near Pune which are called as Asthavinayak. A number of tour packages are arranged from Pune and Mumbai to visit these eight temples popularly called as Asthavinayak Darshan. Visiting these Asthavinayak temples near Pune in a particular sequence and in one trip is considered as a great pilgrimage worthy to fulfill all your desires and wash off the sins. The first and foremost of these eight asthavinayak temples to be visited is the Moreshwar Temple at Moregaon. It is also called as Mayureshwar temple.

Moreshwar Temple is the most important temple of the Asthavinayak Darshan tour. This temple is built from the black stone during the Bahamani reign. The Moreshwar temple is situated right in the center of Moregaon village. The Moreshwar temple is facing north has a 50 feet wall surrounding it. This famous temple of Asthavinayak has four towers at the four corners. So the temple looks like a mosque from a distance. We can see the idols of Lord Ganesha in the four corners being installed in the forms like Ekadanta, Gajanan, Lambodar, Vikata, Vighnahara, Dhumravarna and Vakratund. 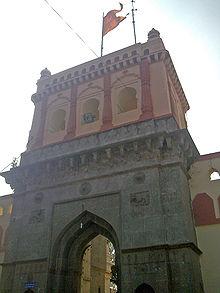 We can see a Nandi sitting in front of this Asthavinayak temple entrance. Normally the Nandi statue is in front of Shiva temples only. A story says that this Nandi statue was being carried to some Shiva mandir during which the vehicle carrying it was broken and the Nandi statue could not be moved from the current location. This Nandi is made of black stone and facing Mayureshwar. This is the only temple of Asthavinayaka with Nandi. The name Moregaon arises from the fact that this region was once full of pea cocks. The name Mayureshwar also arises from the legend that Lord Ganesha rode a peacock in a battle against the demons.

The idol of Vinayak here is installed in a sitting posture which is facing east. The trunk of this idol is curled towards left. We can three eyes in the idol and has diamonds in the eyes and in the hands. We can also see the idol of Ganesha armed with a spear and also we can see a hood of cobra on the head of the idol which encircles his head. The most interesting feature of this Asthavinayak temple is that we can see two vahanas for Ganesh - One is the usual Mooshika (mouse) and the other is the Peacock, which is the vahana of his brother Lord Muruga.

The Moreshwar temple resembles a small fortress. The main temple has four gates. We can see Lakshmi Narayana in the eastern gate of this asthavinayak temple while we can see Lord Shiva and Goddess Parvathi in the southern gate.
Lord Kama and Rati resides on the western gate. Lastly in the northern gate reside, Mahivaraha (earth and sun). 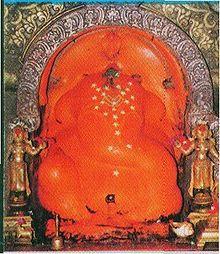 The idol of 'Moreshwar' is very attractive. We can see the idol in sitting posture facing east with the trunk towards left. We can see diamonds embedded in the eyes and navel of the idol. We can also see the hood of a cobra on the head of the idol. There are brass idols of Siddhi and Buddhi on left and right of Moreshwar idol. We can see idol of Mooshika (Rat) and Mayura (Pea Cock) in front of Moreshwar idol. All our desires will be fulfilled on doing Abhishek to the Moreshwar.

The original idol of Moreshwar was very small in size. It looks bigger as the layers of sindoor are applied on it. It is believed that this layer of sindoor peels off on its own every 100 or 150 years, revealing the actual idol. It is heard that the Mayureshwar's armour was peeled off in 1788 and 1822 AD.

The Puja Schedule at Mayureshwar asthavinayak temple is given below.

* The temple is open for the pilgrims and tourists from 5 A.M. to 10 P.M.
* The first puja of the day also called as Prakshal Puja is done at 5 A.M. comprising the water abhisheka and flower offerings.
* Shodoshpchar Puja – This is another Puja which is conducted twice a day at 7 A.M. and at 12 Noon.
* Panchopchar Puja – This is performed at 8 P.M.
* The temple closes for the devotees after the Shejarti at 10 P.M.
* Naivedya – The food is offered to the deity thrice a day:
o In the morning Khichadi (made of Rice) is offered.
o In the afternoon the whole meal with sweets is offered.
* At night milk and rice is offered.

The devotees can perform the Pooja at this asthavinayak temple on their own. 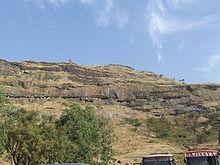 Pune is the most convenient city to reach Moreshwar temple. There are a number of buses, trains and flights between Mumbai and Pune. Moreshwar temple is at a distance of 79 Kms. from Pune city. This asthavinayak temple near Pune is on the Pune-Sholapur high way. There are state transport buses from Swar gate bus depot in Pune.

One more way to reach Moreshwar athavinayak temple is to goto Jejuri from Pune and from Jejuri we can proceed to Moregaon which is around 15 Kms. from Jejuri. In this route the distance between Pune and Moregaon is only 64 Kms.

The place is very beautiful and the right time to visit is in rainy season as you can see a lot of peacocks at Moreshwar.

The other festival which is also celebrated here is the Vijaya DAshami festival.
The idol of Moreshwar is taken for procession around the village on the night of Vijaya Dashami. Anna Santarpana is observed on Magh Shuddh Panchami day. During this time, food is collected from every house of the village and the food offering is prepared. This is distributed among all the devotees.

The second temple to visit as per Ashtvinayak Darshan tour is Siddhivinayak Temple. Read: SiddhiVinayak - The Second Ganesha Temple in Asthavinayak Darshan

I am planning to visit Mayureswar Vinayak temple Morgaon next week. The information was given in detail is very useful. Many many thanks.

Can you suggest some hotels nearby which are cheap?