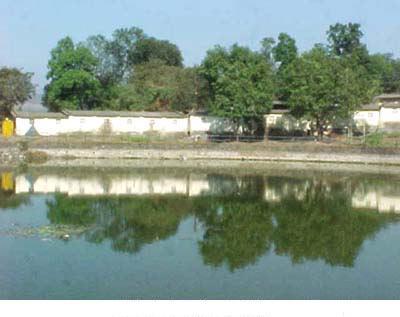 This temple is the fourth Ganesha temple to be visited during the Asthavinayak Darshan tour. Mahad is situated at a distance of 26 Kms. from Karjat in Raigad district.

About VaradaVinayak Vinayak temple at Mahad 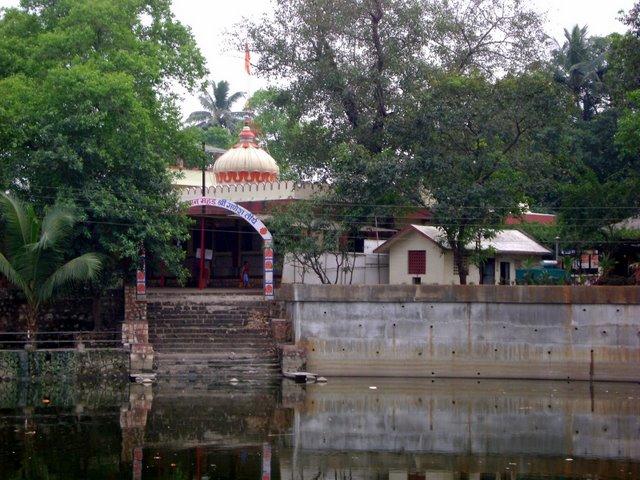 Shri Varada Vinayak temple at Mahad is considered to be one of the Ashta Vinayak shrines of Maharashtra, celebrating eight instances of legends related to Ganesha.

This is the only Asthavinayak temple where the devotees are allowed to personally pay their homages and respects to the idol of Ganesha. They are allowed in the immediate vicinity of the Ganesha idol to perform their puja. In this temple, one can see the Nandadeep (Oil Lamp) which is said to be burning continuously since 1892.

The temple of Mahad is situated on the high way linking Mumbai and Pune. This temple was built by Subhedar Ramji Mahadev in year 1725. We can also see the idols of Mushika, Navagraha Devtas an Shiva linga at this temple. We can also see 4 elephant idols guarding the temple on the 4 sides.

The temple of Varada Vinayak is east facing and is surrounded on all four sides by 4 elephant statues. We can see the Gomukh from which the holy water flows. We can see a holy pond on the west side. 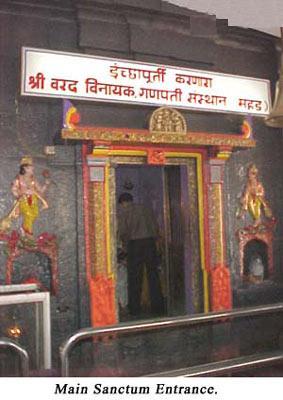 The legend says that the childless great king, Bhima of Koundinyapur and his wife meet Sage Vishwamitra when they came to forest for penance. Sage vishwamitra gave them Ekashar Gajana Manthra to chant and the prince Rukmanda was born to them. Soon Rukmanda soon grew up and became young prince.

Prince Rukmanda while his hunting trip stopped at the hermitage of Rishi Vachaknavi. Rishi's wife Mukunda fell in love with Prince Rukmanda and expressed her desire. Rukmanda bluntly refused and left the ashram. Mukunda felt very much lovesick. Knowing her plight, Lord Indra took the form of Rukmanda and had pleasure with her. As a result Mukunda gave birth to a son Gritsamada. Gritamada curses his mother on knowing the truth leaves to Pushpak forest for penance. Lord Ganesha contented with his penance tells him that he will get a brave son who cannot be defeated by anybody other than Lord Shankara.

Gritsamada asked Ganesh to stay there permanently and asked for knowledge of Brahma. The forest is called as Bhadraka today. He built a temple at this place and the idol installed there in the temple is called as Varada Vinayaka. There is a belief that if the coconut received as prasad during Maghi Chaturthi is consumed, you will be blessed with a son. Hence there is a heavy rush of devotees during the Maghi Utsav to this Asthavinayak Temple.

The Idol of Varada Vinayaka at Mahad

This idol was found by Shree Dhondu Paudkar in 1960 A.D. in a lake. It was outside the sanctum of the temple. It was in a very bad condition, so temple trustees immersed it and consecrated a new one inside the sanctum. This was objected by few people and a suit was filed in the district court. So, now a days we can see two idols, one inside and one outside the sanctum. One is smeared in vermilion in sitting position with the trunk turned left and the other is made of white marble with trunk turned to right. As one enters the Garbhagriha one first sees the idols of Riddhi and Siddhi. Then the two idols of Lord Ganesh . One is a idol made in white Marble the other is the idol covered with sindoor.

* Lord Varada Vinayak is worshipped in the morning, noon and night times.
* A unique opportunity is given to any devotee who donates Rs.31,000/- to the temple. Such a devotee is given the entire day during which he can worship Lord Varada Vinayak as he likes and also he can run the temple for that day in the way he would wish. The devotee along with his family members can worship the lord during the whole day. The temple priests will not interfere in any way for that day.

In the month of Bhadrapad shuddh ( the waxing period) from first day to panchami and in the month of Magh shuddh till panchami, major festivals are celebrated in this temple.

The temple can be reached easily from Mumbai or Pune by road. Mahad Village is around 85 km from Pune and 65 km from Mumbai. The nearest railway station is Karjat which is around 25 kilometers from Mahad.

Fourth Vinayaka Temple to be visited as part of Ashtvinayak Darshan tour is Chintamani Vinayak Temple.

I need more information about this place. Can you please tell me how to contact you? I am planning to visit Varada Vinayak temple next week with my in-laws. I want to know about the accommodation options around the hotel.