Do you love nature and don't look at the watch when you are relaxing with the nature? If your answer is Yes, then Nandi Hills is for you. If you don't have time to read this full visiting experience, read my Nandi Hills visiting tips.

Nandi Hills is a beautiful hill station near Bangalore city, of Karnataka state in India. The nearest airport is Bangalore international airport, which is about 20km from the foot of Nandi Hills. If you are driving from Bangalore city, it is about 60km from the city and may take about 2 hours depending on the traffic conditions and from which part of the city you are starting. It is one of the most scenic hill stations within short driving distance from Bangalore and is above 4800 ft from the sea level. 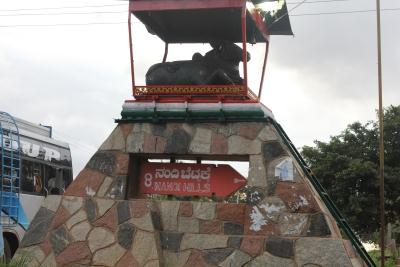 Our recent visit to Nandi Hills

I recently made a visit to this beautiful hill station with my family including my wife and 3 kids. We started from Sarjapur Road at Bangalore at about 7am in the morning. Due to the heavy traffic and ongoing construction work, it took more than an hour to cover the first stretch of the travel (27km) in the outer ring road. Once we came out of the outer ring road and took the National Highway 7, the driving was bit faster. We covered the remaining 30km in the NH 7 in another 45 minutes. Driving through the NH 7 was kind of boring due to the road work and bridge constructions going on.

The last stretch of driving was about 5 km in the Nandi Hills road and few kilometers along the hill road itself. Once we turned in to the Nandi Hills road from the National Highway, the driving experience was really amazing. It was one of the beautiful and scenic places I have ever seen.

On the way to the hill top, we stopped in several places to capture the natural beauty with our digital SLR camera. 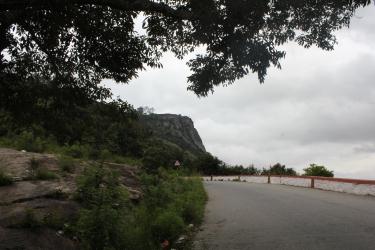 Once you start driving up the hills, you may want to keep your camera aside and focus fully on the road and watch for oncoming traffic. There are sharp turns and steep sides with minimal barriers on the side. Local and frequent visitors were seemed to be driving pretty fast and we found several young guys driving bikes and cars crazy.

Beware of Monkeys - do not expose food

When you drive to Nandi Hills, beware of monkeys. Never leave your car windows and doors open. Do not keep food in hand. Monkeys are pretty aggressive and they will grab the food from your hand. You could get hurt with their nails or teeth. Our car was attacked by few monkeys and they made a lot of efforts to bang on the glass in an effort to grab the food visible through the glass. They expressed their disappointment by pooping all over the car while our kids provoked them showing food packets sitting inside the car. 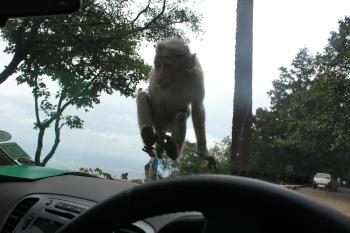 How to reach Nandi Hills

We drove from Bangalore city in our Hyundai i10. If you are visiting from other cities, you can reach by Air, Train or Car.

If you are coming by flight, the nearest airport is Bangalore International Airport, which is about 40km from Nandi Hills.

There are buses up to the top of the hill, but unless you have no other options or you just want to explore the bus journey, it may not be recommended to depend on the public transport system.

The most convenient way to reach the hill station is rental cars, taxi or drive your own car. 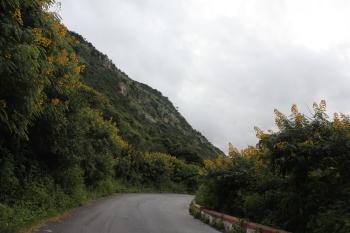 Plan your visit to Nandi Hills

Any time of the year is good to visit this hill station. The climate is moderate and never goes to the extremes. The temperature at summer goes up to 25~28C and in winter it falls as low as 8~10C. Lot of people visit during summer to escape from the heat in other parts of the country. Also, during the festivals in the temple, many devotees visit the place.

We visited in July 2011. The temperature was pretty cool and it was drizzling during the drive, which made the drive a bit difficult but we all enjoyed the visit.

If you are visiting early morning, especially in the winter, carry a sweater.

Try to return from the hill station before evening since driving after dark can be quite dangerous if you are not familiar with hill station driving. The hill station and park at the top is officially open till sun set, but lot of people seem to be staying around even after the normal visiting hours. Check out Food and Accommodation at Nandi Hills also. There are good farm houses and farm stays on the outskirts of the city, which attracts lots of city dwellers who want to have a calm and serene weekend in farm houses or farm stays. Read about this here: Farm houses and farmstay around Bengaluru for weekend and vacation stay

If your next vacation destination is Nandi Hills, read this post to find the food and accommodation options there. There are only limited restaurants and hotels at the top, so it is important to plan ahead of time.

Monkeys in Nandi Hills is a big problems. Nobody can eat food or even open the glass of the cars due to the fear of monkeys. Once when we visited Nandi Hills, a monkey came and grabbed the snacks pack from my little kid. More than losing the food, he was scared to death. Something needs to be done to protect the tourists from the monkeys.

Nandi Hills is our favourite weekend destination from Bangalore. I and my husband really enjoy this place. The honeymoon couples and college lovers there are equally irritating like the monkeys there. We love to sit and relax there on top of the hills but these college lovers are everywhere with irritating behaviour.

Nandi Hills is indeed a super awesome place for a picnic. I have been there last year and planning to go this year again. I rented a car from http://volercars.com/bangalore/