Today we visited the Mantri Square in Malleswaram, Bangalore. This is one of the largest and busiest shopping malls in Bangalore. After about 45 minutes drive, we reached Malleswaram and spent another 15 minutes driving around the area to locate the exact location of the Mall. 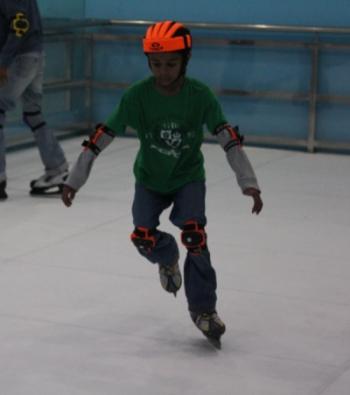 To our disappointment, we saw the big board saying "Parking Full, inconvenience regretted". However, we tried to enter the place and the security people let us go inside. Pretty quickly we found a parking slot. (When we came back, the car was moved up and was parked on top of another car on a raised platform. They use some kind of rotating platforms to move the car up and down to park them in multiple levels).

Since tomorrow is independence day, the place was very crowded. However, we enjoyed the few hours we spent there. As usual, our favorite place in any shopping mall is the eating place. Mantri Square has got a lot of small restaurants and fast foods which include Pizza corner, Pizza hut, Beijing bites and a lot of others.

We found several shops including Office Depot in Mantri Square. Almost anything we get in USA were found in various shops there. One thing that made us happy was, some of the things that we brought from USA are there for almost triple or even higher price. One of such items was our 55" Sony Bravia TV. We brought a 55" 3D LED Sony Bravio, which we purchased in USA for US$1600. A similar model 55" Sony Bravio without the 3D was on sale for Rs 1,68,000 (a savings of more than $2000) in the mall. Another interesting item we found was an Elliptical Exercise machine on sale for Rs 3,28,000. We bought a similar one in USA for US$800 (our savings from these 2 items is more than US$6000)! Just these 2 items made our entire shipping from USA worth the money we spend for shipping. The total cost for shipping a full container from USA to India was US$5200. 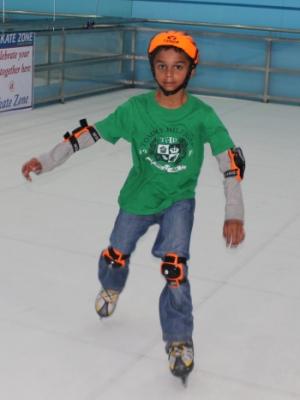 Just before we returned from the Mantri Square, we saw the banner "Ice Skating". This immediately caught our attention. We never expected we would be able to find an Ice Skating Rinks in Bangalore or even anywhere in South India. My son John wanted to give a try. Even though he has played quite a bit with roller skating, he never got a chance to try the ice skating.

We found the skate rink in the ground floor and purchased the ticket for 30 minutes. There was an independence day discount today, which reduced the 30 minute ticket price from Rs 250 to Rs 225. They provided the skating blade as well as helmet and knee pads. And a trainer was assigned to help John.

In less than 5 minutes, John got in to action! He was able to skate pretty well. Trainers left him alone. In fact, there were no other people skating well. I am not claiming John is good at skating, but since there were no one else doing it better there, he was like a star at the show!

We got another Ice skating rink experience at Lulu Mall, Kochi also.

Tail piece: The ice used in the ice skate rink at the Mantri Square, Bangalore is not real ice. It is artificial. I think it is some kind of marble or some other synthetic material used in the floor instead of ice. Due to it's white color, it may look like ice on a quick look. In fact, the skaters do not feel much difference other than the skating will be little bit slower and chances of falling down is slim. And even if you fall down, you won't get hurt much compared to real ice skating. This is ideal for beginners.