The Ruins of Mandu City 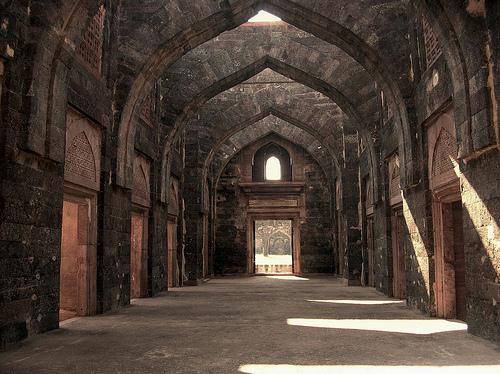 The ruins of Mandu City in Madhya Pradesh are located on the elevated Mandu Plateau. These ruins present within the Fort speak of the ancient history and the fusion of Hindu and Muslim style architecture. The fort is spread over an area of 82 km and is considered to be one of the biggest forts in India. Fort comprises of many historical ruins which include a collection of various palaces, pavilions, gates and picturesque canals. There are around 40 monuments within the fort which are broadly categorized into 3 Groups. This categorization is done for a better understanding and convenience of the tourists and the visitors. These groups are the:
1. The Central Village Group
2. The Royal Enclave Group
3. The Rewa Kund Group 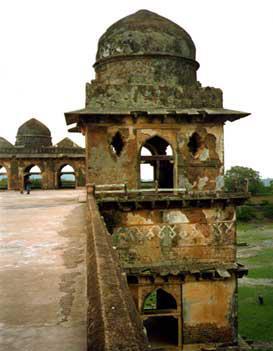 Jama Masjid: Jama Masjid forms one of the prominent structures of the Fort. Jama Masjid is a huge mosque which was probably built in the year 1454. The architecture of Jama Masjid is a great example of Afghani Style Architecture. The modeling of Jama Masjid is said to have been inspired from the original artworks of Omayyed Mosque located in Damascus. A huge Dome dominates the center with many small domes intervening side spaces. The Jama Masjid is open for Public only for a selected time.

Jain Temple: Jain Temple in the fort is the last monument one could find in the Village Group. The Jain Temple of Fort is a huge complex of several buildings devoted to the Jain Thirthankaras. One can also find a Jain Museum with this Complex. There are huge idols of Jain Thirthankaras placed all over the Jain Temple. All these idols are made in Marble, gold and silver and are intricately decorate. The Jain Museum also has a Theme Park which comprises of a Walk-on Replica of Palitana.

Hathi Pol: Hathi Pol which means an Elephant Gate forms the main entrance of the Royal Enclave. The Hathi Pol is a huge entrance with two elephants flanking it. Around the gate there are bastions and guardrooms which are placed in a conventional manner. There are 2 wells right beside the entrance, one of them has a domed centerpiece and the other has arcades all over it. 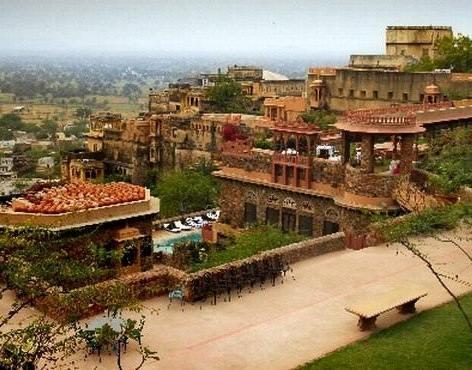 Hindola Mahal: Hindola Mahal means the Swinging Palace. The structure is called so because of its sloping sidewalls and an austere simplicity. The Hindola Palace is done up with delicate stone tracery and has a pleasure dome which gives out a great impression.

Champa Baoli: Champa Baoli is one of the interesting structures within the Royal Enclave with a Step-well which was used as a hot-weather retreat and features cool wells or bathrooms. Champa Baoli is called so because it was said that the waters from this well smelled like the Champak Flower. There is a hot bath reserve made at the side for the winters.

Taveli Mahal: Taveli Mahal once was a guard house and also housed stables for the Royal family. But now it has been revamped into a Archaeological Survey of India's Antiquity Gallery, which is worth seeing. This gallery exhibits some of the rarest valuables which were recovered from these sites at the Fort.

The Rewa Kund Group is a special category which is an example of Legendary Romance that cultivated during those times. The Monuments which come under this category include the Palace of Baaz Bahadur and the Pavilion of Rani Roopmati. The Rewa Kund Group comprises of the following structures:

Additionally there are few other structures which one can have a look when visiting the Fort at this City. These structures include Neelkanth Palace, Darya Khan's Tomb, Hathi Mahal, Dai ka Mahal, Dai ki Choti Bahan ka Mahal, Jali Mahal and the Malik Mughit's Mosque.