The city Coimbatore in Tamil Nadu is famous as a textile hub, engineering capital, retail and is also becoming like its distant cousin Chennai as Metropolis. If somebody is interested in visiting it as a travel haven, everything is available in its outskirts and here is our trip in the outskirts of Coimbatore.

As the places of visit are in outskirts, it takes about 5 days to cover all the places as everything is in different direction and on the Western Ghats covering round city.

We have entered the city by car from Palakkad, Kerala via Valayar which is a transit hub for other states and hence our first visit in this state in the Coimbatore District is Eachanari Vinayagar Temple which is on the Pollachi Road. This is about 10 kms from Coimbatore and one of the oldest temples. The interesting story behind this temple is when the deity is taken from Madurai to Perur Temple, it got stuck on its way and hence the temple is constructed here itself. The deity is such a big with 6 feet height and 3 feet width.

From Eachanari, the nearest junction in Coimbatore city is Ukkadam Bus Station and from that junction, we proceeded further to Perur Temple which is most popular temple in city and is about 7 kms and deity is Shiva and this is famous for its Kanaka Sabha that is hall adorned by gold plated. This is nearer to Noyyal River aka Kanchi Maanadhi and this spot is famous to pay homage to ancestors.

There are two temples nearer to Coimbatore Junction are Koniamman Temple in Town Hall and a big Vinayakar Temple in Puliakulam. These are visited casually in the evening and these are main hall marks in the centre of the city. From this puliakulam temple, recent attraction is a Mall on the Avinashi Road.

30 Kms from Coimbatore, there are few temples available when the transport from Chennai entering the city and one among them is this Shiva Temple and the deity here is a Suyambu Lingam which is said to be growing in size and there is another temple on the top of small hill is meant for Parvathi close to this temple. There is another Shiva temple is also available near Annur. We have covered these two temples in the morning half-a day.

The place is famous for silk sarees weaving and we have visited the temple as this is also nearer from Annur Junction.

We have visited this temple which is 40 kms from Coimbatore and is called Banaras of South as the deity is Linga called Avinashilingeshwar and it is called as Banaras because the belief of taking bath from a well water in this temple.

20 Kms from Coimbatore, this temple is situated in one amongst the important five hills but we have visited only the temple at the foot hills as women are not allowed to climb the hill which may take some four hours by walk.

This is another Velliangiri multireligious temple(Isha) on the foothills, where the Dhyanalinga Multi measures 13'9" largest Mercury Based live Linga in the world. The deep meditative trance and the divine energy in the dome around the linga we entered after taking a deep bath in the pond available in the premises, is really a rare experience of its kind. We entered the meditation hall at 6.00 p.m. which is another experience of its kind.

At about 15 kms from Coimbatore, this hill temple is at an attitude of 500 feet which is very scenic beauty with clear views of low lying city on its way. This temple is famous for Murugan deity and there are many under tunnel places supposed to be lived by many siddhars. 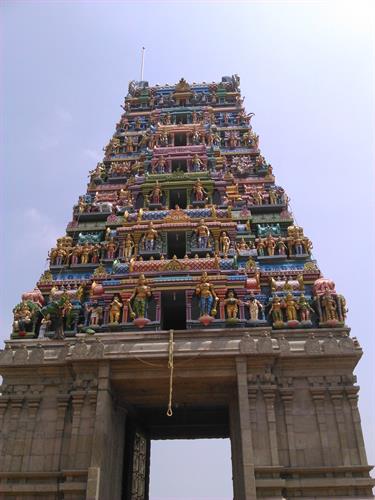 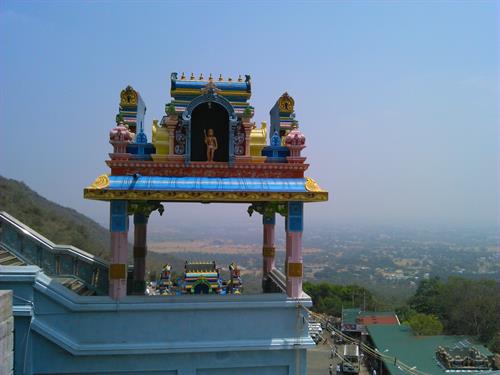 This is another Murugan temple situated about 30 kms from city called Periya Thadagam on the way to Anaikatti which is entry point from Kerala on the Western Ghats. The temple is also at an attitude and one can reach only via steps carved on the foot. The main deity is Murugan and there is another deity is also available is Hanuman and there is an interesting story behind it. When Hanuman travelled SriLanka with a Chiranjeevi tree in his hand has rested for some time to clear his thirsty and Lord Muruga itself gave him water by digging through his Vel in the rock.

From there, nearer is an ashram by Dayananda Saraswathi is another place to have a peace and the premises has many meditation training centres like yoga and also temples which is very nearer to Anaikatti. When we visited, Swamiji was taking treatment of his illness and hence could see him from a distance only.

On different occasions, we visited the two falls in Siruvani that is Kovai Kuttralam and Sengupathi Water falls located about 37 kms from Coimbatore which are in dense jungle and it is really an enjoyable and memorable trip in these falls and dam and other surrounding natural beauty.

It is in Mettupalayam on the way to Ooty is really a water theme amusement park to enjoy the water rides, the whole day.

When we visited the city, the camp for Elephants organized every year by Tamil Nadu Government is a great feast to enjoy all the temple elephants in one place which is on the foot hill of Western Ghats and there is a Badra Kaliamman Temple also available nearer to the camp.

Coimbatore used to be the main centre before 5-6 decades.Even Bangalore is considered not that important during those days. Coimbatore was a industrial power house with the motor manufacturing, tool manufacturers like LMW and other large scale industries. After the bomb blast in 1999 or so, the fate of the city changed. Today, it is stagnant. The article is relavant; But has not covered attractions like forest trekking options around Kovai.

Thanks for sharing information about Coimbatore. Very informative article. So far I thought Coimbatore is a very boring industrial city with no fun and entertainment.

Nice blog on these attractive places to visit at Coimbatore, which is known as an industrial city.

Thanks for sharing this.

hi,thanks for sharing this blog! This sheds light on Coimbatore's beautiful tourist destinations other than its industrial attractions.