The science park in Kalamassery is one of a kind and is the first one in Kerala to offer a science park along with various entertainments like butterfly park, music fountain, thrillarium etc in a single facility. This science park is expected to become one of the best attractions in Kochi and Kerala. 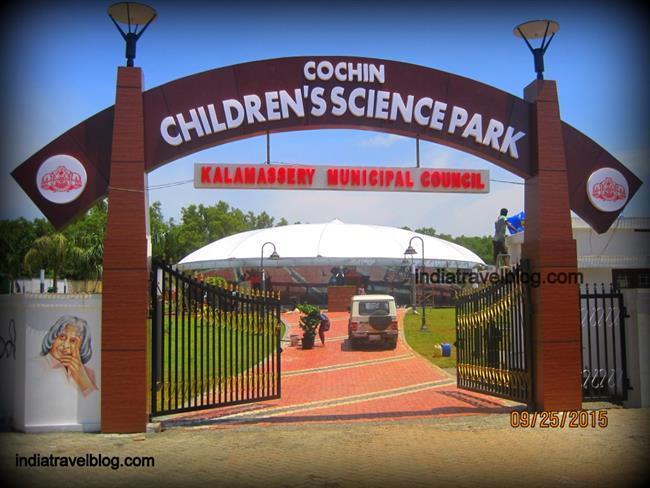 Normal hours of operation:
Weekdays: 4pm to 9pm
Sundays and public holidays: 10am to 9pm
Morning walk in the walking trails: 6 am to 9 am (soon to be open for morning walk)

4D movie (Thrillarium) starts the shows at 3:45pm and the last show is at 8om.

Schools may make advance reservation and make arrangements for visits. 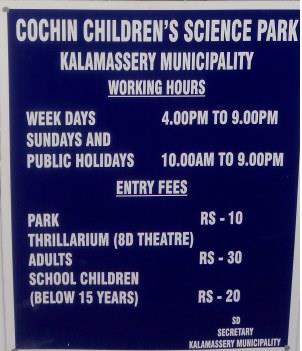 What to see in the science park?

The following facilities are planned to be developed in the near future: 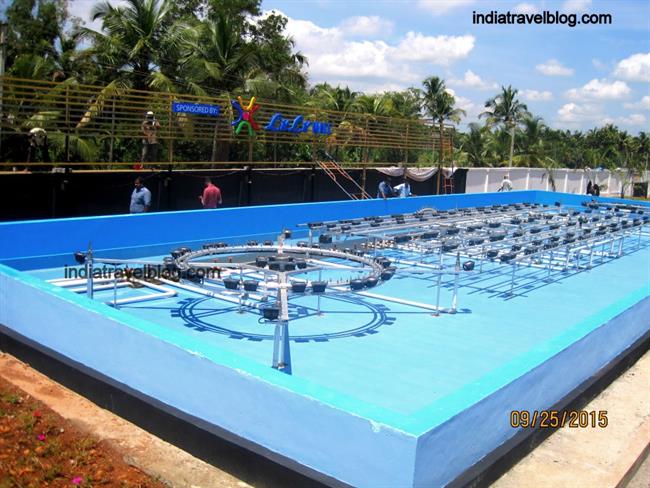 
A video of children's playing on the park

The Kochi science park for children was originally proposed by Mr. P. Rajiv M P in the year 2012. This idea was shared with the Kalamassery municipality, which in turn presented it to the chief minister of Kerala Mr. Oommen Chandy. Kerala government allowed 5.25 acres of land from the Kinfra Park near the Medical College and HMT in Kalamassery. The total cost for construction of the park is about 9 crores. The 5.25 acres of land was given for free by the government. The Thrillarium, which is a 5-D movie theatre with simulator was constructed at a cost of Rs 1.54 crore donated from the local area development fund of Mr. P Rajeev (former MP) (Rs 1 crore) and two nominated MPs Mr. H K Dua and Mr. Ashok S Ganguly.

While the science park is one of the most exciting developments in Kochi, there are some concerns too. Indian Navy has come out with a warning about the strong levels of radiation from the adjacent NAD campus. Naval authorities have said that they should not be held responsible for any radiation hazards at the Kochi science park.

When the municipality approached naval authorities for NOC for the park, they were asked to submit an undertaking regarding the same. The NOC for the park was given on March 19, 2014, based on the alterations suggested for construction of buildings. But NOC was given along with strong warning: The high power transmission station could emit high frequency electro magnetic radio waves that could affect the biological systems.

However, the municipal authorities are confident that this will not affect the visitors as the park is open only for a few hours and there are no radiation hazards reported in the neighborhood till date. There is a university hostel and a campus operate closer to the transmitting station. Also, all alterations suggested by the naval authorities have been implemented.

How to handle kids during holiday travel

Traveling with kids is a real challenge. They can spoil all your vacation fun without reasons. Also carrying kids is your responsibility, if you don't, then who else? Follow these simple tips to make your holiday travel with kids a lot of fun and no mess.

Mysore Zoo is a Must for Kids vaccation

Are you looking for the best buffet restaurants in Ernakulam, Kerala? Kerala is not just the best tourist places in India, but it offers great food as well. Find the address and details of Yuvarani Hotel in Ernakulam/Kochi.

I am going to visit tomorrow.

I just got an update that the park is closed now for completion of the work. It will be opened for public on 10 October 2015.

Yes, this is the new park in Kalamassery. There are lot of play structures for children. Even adults will enjoy the simulation ride and the musical fountain.

The admission fee to the science park is Rs 20 for adults and Rs 10 for children.

Is it opened yet? I would like to visit during the weekend if it is opened. Looks like the park is sitting dud as the state government or local administration is not interested in successful operation of this Children park.