Once you land in Shillong, it is possible to move around the other places in Meghalaya by taxi and enjoy the Scotland of the East as it is so called. A Shillong tour is never complete without a day spent in touring attractions around Sohra, or Cherrapunjee. We had researched well about what to see in and around Shillong.
So it was quite easy for us to plan the trip to Sohra and decide what attractions to be included in the itinerary. Readers, this is truly a beautiful corner in the north-east of India and is desperately waiting to be discovered and explored.

We checked the rates of the Sohra tour at various places like the MTDC office, reception at the hotel and a few taxi drivers on the road. After an hour or so we finalized the tour with the hotel desk. Luckily we met another couple who joined us for the tour. We split the taxi cost and this actually turned out to be very cheap. The tour commenced at 7.30 am in the morning. 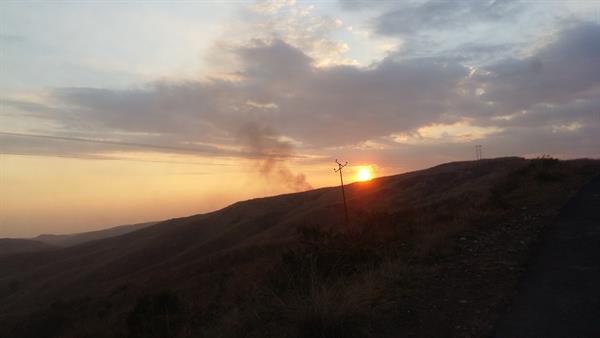 Sunset near the caves at Sohra

We took an early breakfast and took the taxi to start the Sohra or the so-called Cherapunjee tour. We had packed some dry food, ample water, tang, dry fruits, caps etc. for the tour. The weather was pleasant and the scenery on the way was awesome. Green forests and tall mountains lined up all along or path and our tour commenced. The first stop was at Mawdok Dympep Valley.

This valley is located in the East Khasi Hills District and Sohra and is about 38 kms from Shillong. So how do you reach this valley? A few kms from Umtyngar village, as one takes the right turn from the road junction, one comes across a beautiful bridge known to the locals as the Duwan Singh Syiem Bridge, that is the entrance to the Sohra tourist circuit. From here the landscape abruptly changes into picturesque deep gorges. 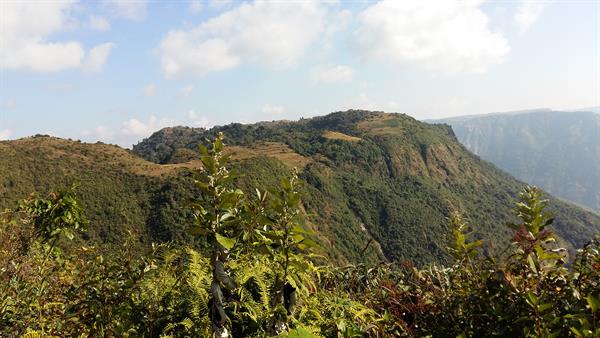 The Forest Department has constructed a viewpoint where visitors can stop a while and enjoy the spectacular natural beauty. Most Tourists get the first view of the Mawkdok Valley, which extends right up to Cherapunji, from this viewpoint. Getting a clear view is a matter of chance as mostly it is obscured by clouds.There are adventure activities in the valley, approved by the government. For example, zip lining can be enjoyed along the sides or across the valley at a very reasonable cost of 200 rupees. Many tourists were enjoying zip lining here. After enjoying the view and clicking some photos and selfies we moved on further to drive towards Sohra.
We also went to the Root bridge but I am blogging it separately.

We stopped by a simple place for lunch, a thali for 150 rupees. Tasty, unlimited, not spicy or oily and worth having. The place also offers dosa type varieties for those who do not favor thali. We enjoyed the lunch and moved on to the next destination on the list. From the grounds of the Orange country, we could see the winding road leading to Sohra and you can see Ramakrishna Mission on the hill, right in front of you.


Once you step into Sohra, also called Cherapunjee it looks quite like other Indian hill station but it is supposed to be an eco-friendly destination and is known internationally for receiving the highest rainfall in the world. This is because Sohra is located on a plateau in the Khasi hills and is directly influenced by the southwest monsoon and the northeast winds. Because of the geographical setting, the place is sprinkled with waterfalls cascading over deep gorges around the plateau. The waterfalls flow into the swift rivers which flow down the plains in the southern direction. The heavy monsoon has resulted in creating one of the world's rarest biodiverse vegetation in the world in Sohra. How wet has Sohra been? This place recorded the highest total annual rainfall of 24,555 mm in 1974; 9,300 mm in a month in 1861 which was a World Record, and the 1,040 mm in a single day in 1876. So when the British realized the intensity of the rainfall that set up a meteorological office to measure the rain. I had read about this place only in the geography textbooks mentioning that the houses are built on stilts. It was during this trip that we actually saw it live. After driving around the place we moved further to visit Nohkalikai Falls. 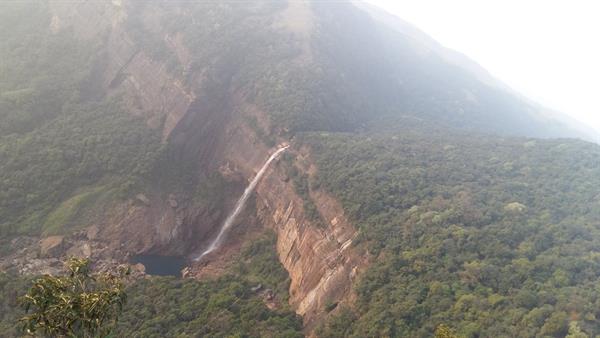 This is a hauntingly gorgeous and the tallest plunge waterfall, gushing down from the top of the gorge to the mystic deep green pool below from a height of 1100 ft. This fall gets its name from a tragic legend associated with it. The legend is about Likai (ka prefix is used for women by the locals), an inhabitant of Rangiytreh in Sohra district. She lost her husband after the first child and was forced to earn money to support the family by ferrying iron between villages. She remarried and her husband could not bear her love for the daughter. He killed the daughter in anger and cooked her for dinner. Ka Likai came in tired from work and unknowingly ate the child. After eating she found her daughter's finger in the betel nut basket. In horror, she realized that she had relished by eating the flesh of her only child and was unable to overcome her sorrow. So she jumped off the cliff to her death. From then on the falls came to called as Nohkalikai, the jump of KaLikai. From Sohra, we drove for about 10 km all along the plateau till we reached the village.
The village people charge a nominal entry fee and use it to maintain the place. There are few souvenir shops and small hotel joints near the parking lot. From then on, you can walk around the plateau and watch the falls. There are viewing points all along one side of the plateau and a big board which talks about the legend. When I read the legend and looked the falls, I got goose bumps. The legend, tall plunge, and green plateau has still remained inscribed in my heart. The views were captivating, and the falls were clear. We moved around the place for half an hour, just watching the gorgeous waterfall and taking in the view. Further away from the falls we could see tall mountains covered with lush green forests. The driver beckoned us to move to the next destination else it would become sunset and the caves would close for the day.

The caves are about 6 km southwards from the Sohra market in the village of Mawsmai in the direction of Bangladesh border. What is so unique about these caves? It is one of the most accessible caves in Meghalaya and you can explore them without a guide. You drive through the grasslands surrounded by forests you come up to a village, and you can see the tall rows of monoliths along the road. Then you come across a clearing where there is ample parking space. From here, you stop at the ticket counter, buy the entry ticket and start walking up the concrete pathway through the jungle. This brings you to a small groove on the hill where the Mawsmai caves lie hidden. Now you are ready to walk down the main cave entrance. 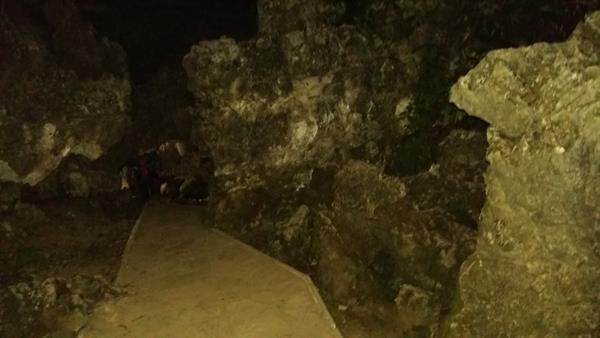 The dim lighting in the cave allows you to enjoy the natural limestone formations of stalactites and stalagmites in awe. It is left to your figment of imagination to visualize different life forms on the walls. At one place you can interpret the feet of an elephant, and in other places sari-clad women stooping through the low passage. Well, this is just imaginary. This magnificent natural wonder is the handiwork of several centuries of natural abrasion and underground water. Even though the cave opening is large, further on in some places the path becomes very narrow. You may often have to bend and squeeze to go further. If you suffer from claustrophobia, decide whether you really want to go in! The cave is so quiet, you can easily hear your own breathing. Rocks glint around you, and water drips from the tips of the formations. The place is a haven for bats and insects. Once you absorb this natural wonder you wonder how this place was discovered? As the legend goes, Khasi hunters from the village discovered the caves inhabited by animals. Soon they drove the animals away from the caves. Even today, once a year the tribals visit the caves and carry out a special puja. After a long walk through these formations along with bending and squeezing you come to the end of the cave and you see daylight in front of you. You walk down the concrete steps and come to the clearing from where you had started. The entire place was well maintained and not a speck of dust around.
It was already dusk, the sun had set and we were ready to drive back to Shillong. It was a day well spent watching the valleys, forests, waterfalls and lastly ended with this underground wonder of Mawsmai Caves. The last destination on the itinerary was like an icing on the cake! A peek at the underground world; something we'll remember forever.

Additional attractions which can be covered in this trip


Since the sun sets by 5 pm, and the darkness makes it impossible to see nature's beauties even on the way back. So do not forget to quench your thirst of nature, on the way. Also, if possible, start early, so that you can enjoy a few more attractions before sun sets. We had Dawki and a few other falls on the itinerary but it is just impossible to visit.

In a nutshell, it was a day well spent, exploring the hills, valleys, the plateau, waterfalls and the caves in the Khasi hills. The day trip to Sohra is ingrained in my heart forever.

Nohkalikai Falls is the best attraction. The view from the top is exiting. And Cherapunjee is no more the land mass that receives the highest waterfalls.

I hear much about Mawkdok Dympep valley. What is the major attraction there?

Nohkalikai Falls is a must visit place in Cherrapunjee and it is the fifth highest waterfall in India. We made the trip during Monsoon season, and it was an awesome experience.

It isn’t a fluke when someone says that you can actually touch the clouds in Cherrapunji. The gentle hills here are kissed by the sun and the rains alike, leaving the ultimate shade of green that adorns them and you’ve described all this beautifully!
Places like Eco park and the seven sister waterfalls makes you fall in love with them. I visited Meghalaya last year and wrote about my experience. Give it a read if you wish 🙂
http://blog.untravel.com/cherrapunji-or-mawsynram/