Wagah is a village situated near a road border crossing, goods transit terminal and a railway station between Pakistan and India, and lies on the Grand Trunk Road between the cities of Amritsar, Punjab, India, and Lahore, Punjab, Pakistan.

The border is situated 24 kms from Lahore and about 32 kms from Amritsar and 3kms away from Atari, the bordering village. Wagah is renowned by the name Wahga in Pakistan. Near this village the line of partition of India was drawn. About 600 meters East of the this village only India and Pakistan had been divided by the Radcliffe line, the boundary demarcation line. This Radcliffe line even divided the Wagah village into two parts, the eastern part went to India and the western part went to the newly born Pakistan. The Wagah rail station is situated approx 400 meters to South.

The border is treated as the International border checkpoint between the countries. All the real country lovers, the great patriots could not help but saw the bloodshed of the motherland partition and broke into tears, still remind us of that day..! They were helpless. It hurts. It really force sometimes to think that what really led this partition happen? Is it really hatred! Will it ever melt or evaporate forever?

Every day millions of people come to this place from across the world at sunset. Flag retreat ceremony is celebrated here throughout the year. Even thousands of people from East and West of the border to see. We reached a little after 4PM. The place was overcrowded. There are separate seats for man, woman and foreigners. You can hire taxi or jeep to reach there.

Reaching there was a great feeling. May be it was due to the aura of patriotic songs played there made the environment all fantastic, I can't explain in words. People march on the road holding the flag. People from both the countries who are soldiers make procession and shout very loud. The soldiers get permission to march on road from their commanders. The energetic precision is done by the clinical military which lasts for about 45 minutes. The Indian soldiers from BSF (Border Security Force) are seen in Khakhi and Pakistani 'Sutlej Ranger' soldiers are seen in black. 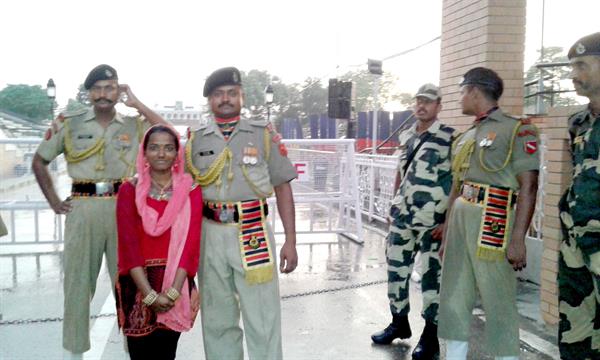 But instead of that great noise of their shout and sound of boots, one can sense a great pin drop silence. Because people i.e. the visitors or spectators become very quiet, may be they watch the ceremony very carefully. The soldiers reach towards the gate marching to the respective flags that are flying high at same height. They solute the other soldiers and lowered down the flags with respect and then brought that back. While lowering the flag it makes the symmetrical "X" at some point. Then they carefully folded the flag. Gates were shut. Then the announcement was done that the ceremony ended. So the soldiers marched back with their respective flag.

When the ceremony ended it started raining. And the patriotic songs were being played. We took some clicks with some soldiers and talked a bit. Sharing the pics. And yes, We also bought CD/DVD from there of the entire flag ceremony and procession. 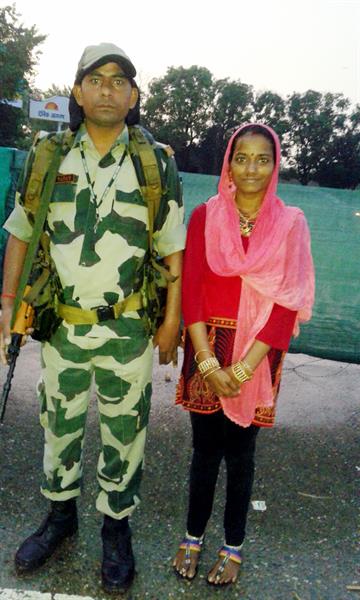 Problems we faced there was the traffic jam just after the ceremony, and cell phone signal.

Wagah is a must visit destination in India. Visiting Wagah border makes you an emotional attachment with India.

I also visited Wagah Border, it was an amazing feeling to watch the flag-lowering ceremony from both the countries. The patriotism was all-around air. Every Indian must visit this place. I also visited other places like Harminder Sahib, Jallianwala Bagh, Gobindgarh Fort, and Valmiki Mandir.