Guru Shakya Monastery is located at about 8 kilometers from Darjeeling and is the age old monastery of the Ghoom area. The monastery captures the attention of all the tourists and travellers to Darjeeling. This Guru Shakya Monastery is a significant and historic monastery which was built around 1915 and has been supporting the monastic community all these years. In this monastery the prayer hall can accommodate about 60 monks. 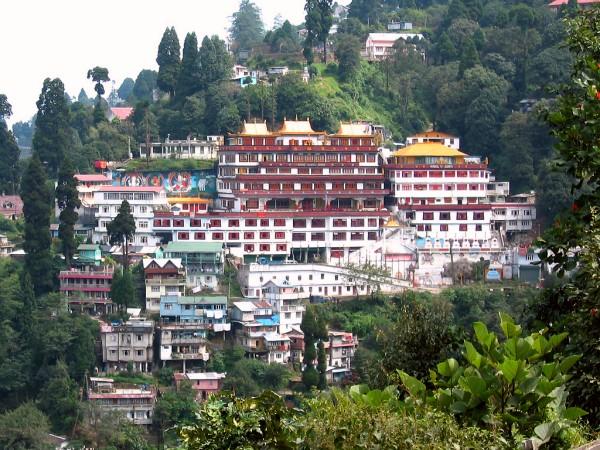 Dali Monastery or the Druk Thubten Sangag Choling Monastery was built after the eleventh Gyalwang Drukchen Tenzin Khenrab Gelek Wangpo passed away in 1960.Druk Thupten Sangag Choling Monastery is at Dali which is located at about 4 kilometers away from the town of Darjeeling.
His Ennence Kyabje Thuksey Rimpoche became the regent of the Drukpa Kargyud Lineage. His compassion and love as a concerned teacher spread and he started building Druk Thubten Sangag Choling Monastery at Dali, Darjeeling in 1971 stressing that the sole aim was to preserve the precious Dharma, the Tibetan culture and its traditions. Dalai lama had inaugurated the monastery in 1993 and gave 3 religious teachings there.
It is also said that after the founder Thucksey Rimpoche died in 1983, his incarnate was born in 1986 at Ladakh.
This is the only monastery to have Disciples and Monks from the eastern part of the Himalayas. There are about 210 monks residing there at present . Prayer sessions are held from from 5.00 am to 6.30 am in the mornings and from 5.00 pm to 6.30 pm in the evenings.

Bhutia Busty Monastery is located at about 1.5 kilometers from Chowrasta , a well known tourist spot of the Darjeeling area. The Bhutia Busty Monastery has a long and colourful history and belongs to the Red sect of the Buddhist lamas. This Monastery is linked to the origin of the name Darjeeling. Dorjee means Thunderbolt and the ling means rest in the Tibetan Language. Bhutia Monastery was originally located on the observatory Hills and was sacked by the Nepalese in the 19th century. The Monastery was rebuilt on the present site but was destroyed in the 1934 earthquake. The present existence is due to the munificence of the late Raja of Sikkim.

Yiga Choling Buddhist Monastery is located at about 8 kilometers from Darjeeling and is located at an altitude of 8000 feet above sea level. This is located at the last lap of the journey just before the Batasia Loop. This belongs to the Yellow sect of the Buddhists who worship the Maitreyi Buddha. This is also known as 'Coming Buddha' and is about a 15 feet high statue. The Yiga Choling Buddhist Monastery was built in 1875 by the Lama Sherab Gyantso. This is the largest of the three monasteries in the Ghoom area. The monastery contains mages of Buddha's disciples "Chenrezi" and "Tsongkapa" as well as Buddhist texts like, Kangyur the Buddhist Tibetan Gospel running into 108 volumes.
This monastery, Yiga Choling Buddhist Monastery, in Ghoom, is considered to be one of the holiest monasteries as this was personally blessed by the renowned Tomo Geshe Rimpoche of Tibet.


Japanese temple (Peace Pagoda) are the Shanti Stupas in India which were established by a Fuji Guru who was a close friend of Mahatma Gandhi for the World Peace. There are six such beautiful stupas in India and Nipponzan Myohoji Buddhist temple at Charlimont in Darjeeling is one of them. This Nipponzan Myohoji Buddhist temple is a stupa built in the year 1972. This Peace Pagoda was opened to the public on the 1st November 1992 and gives you a beautiful and panoramic viewof Darjeeling and the Kanchenjunga Range.


Yolmowa Buddhist Mak dhog Monastery or the Aloobari Monastery was founded by its Head Priest and is located at a distance of 3 kilometers from the village Chowrasta, of Aloobari on the eastern slopes of the Jalaphar hills. Sri Sangay Lama, a highly revered religious head of the Yolmowas, built this monastery. Yolmowa Buddhists are an ethnic group who hail from the north east of Nepal and later came to settle down in Darjeeling.

Yolmowa Monastery was constructed and completed in the year 1914 coinciding with the starting of the world war I and so the name Makdhog, which means 'Warding off the war'. The sanctum sanctorum of the Yolomowa Buddhist community, the Monastery has helped preserve the distinct social, cultural and ethnic identity.

This is one of the oldest monasteries in Darjeeling and is worth the visit. You can see statues of Buddha depicting various forms is a sight to be seen.he paintings which are seen are supposed to have been made with herbs and grass which by itself is an amazing work of art. There are embossed images depicted in these paintings which can be felt by touch and makes one think how much work and patience should have gone in to the painting of the walls and that toio with such minute details. These paintings depict the ways of life as a story. There are also most valuable scriptures seen lying inside the monastery.

Darjeeling is a small beautiful town of north east India. It is a hilly place with pleasantly cold weather. It is a UNESCO World heritage site with all facilities for travelers including special accommodations for all class of people coming across from the world. The town is surrounded by the greenery and famous Darjeeling Tea gardens. You will enjoy the trip. Here are some highlights and travel tips about your wonderful Darjeeling Tour.

The Toy Train Of Darjeeling

This article is about best tourist attractions in Darjeeling. It also describes about the beautiful places on the way to Darjeeling. The rich greenery surrounding this area including tea plantations and the train journey in Darjeeling are also outlined.

Darjeeling Tea Bungalows: A Must in your Travel List

Darjeeling is called the queen of hills, and for the right reasons. It is one of the most romantic hill stations of India that is known for its stunning landscapes that attracts people from around the globe. There's no denying the fact that the Queen of hills has everything to offer to its visitors, and there are a number of reasons to visit the land of toy trains.