Cubbon Park in Bangalore was laid out by Richard Sankey, the chief engineer of Mysore, in the year 1864.located in the heart of city in the Central Administrative Areating Commissioner of Mysore in 1884 and subsequently renamed as Cubbon Park,The park has some wonderful collection of statues .This is to cater for the large amount of travelers between Bangalore and Mysore. Cubbon park is a beautiful park in Bangalore. It is a large piece of land and covers an area of almost 300 acres.air-conditioned bus and covers most important tourist spots in the city.. This public park was first named as "Meade's Park" after Sir John Meade. 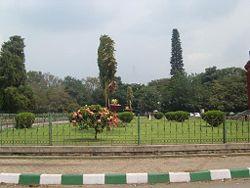 This gigantic park has covered around 100 acres of land and further later expansions made this park which covers 300 acres now which is around 1.2 km². This park has the large quantity of storage of flora and fauna plantations with numerous quantity of aesthetic buildings surrounded, famous statues of famous personalities.

This park was named as Meade's Park after Sir John Meade, who was the acting commissioner of then Mysore State in the year 1884, and later renamed as Cubbon Park in the name of the longest serving Commissioner of that time Sir Mark Cubbon, but in 1927 it was again renamed as Sri Chamarajendra Park as a mark in the memory of Sri Chamarajendra Wodeyar the then ruler of princely State of Mysore. 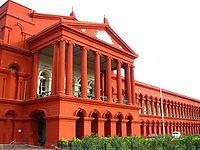 This park consists of natural massive bamboos with flowerbeds with grassy expanse, which is maintained by the state horticulture department, this park also consists of motorable roads with separate walking areas to help morning walkers and joggers. In fact this gigantic park brought the name Garden City to Bangalore.

This park is accessible from all sides like M.G.Road, Kasturba Road, Hudson Circle and also from Ambedkar Veedhi, but only light motor vehicles are allowed through this park and all other accessible points are well connected, one can access this park by walk through walking paths, this park is open to all at all times, but the motorable roads will be closed between morning 5 to 8 to ease out traffic to help morning walkers and joggers.

Exotic and indigenous variety of species are available in this park for view, there are about 68 genera and 96 species of plants and trees one can see here in total around 60000 plants and trees are available here few among them are Artocarpus, Cassia Fistula, Ficus, Polyalthias, Araucaria, Bamboo, Castanospermum Australe, Swietenia Mahagoni, Millettia, Grevillea Robusta, Peltophorum, Schinus Molle, Tabebuia, etc.

Other ornamental and exotic flowering trees are on the roadside lining in the park they are Grevillea Robusta (silver oak), the first species of oaks introduced to Bangalore from Australia and the Delonix or the Gulmohar tree are other types.

Historical buildings and monuments around

From the central hall of the erstwhile Attara Kacheri, which literally means 18 government offices, now has been converted as High Court of Karnataka which has been extended upto Museum building.

Another monumental structure near this is Sheshadri Iyer Memorial Hall, which is now used as Central Library which is having a rose garden in its front. Other buildings around this park includes Indira Priyadarshini Children's Library, Venkatappa Art Gallery, Aquarium which is considered as second largest in India, YMCA, Yuvanika, the state youth centre, Century Club, Press Club, Jawahar Bal Bhavan, Tennis Pavilion, Cheshire Dyer Memorial Hall and the Ottawa Chatter.

This band stand was constructed in the year 1900 with cast iron, British Royal Air Force was used to play the western style band stand on Saturday evening of that time, the added attraction of this place is an amusement park near Jawahar Bal Bhavan, and an Puttani Express which runs at an speed of 1.2 km with in the park which is the main attraction for children, a doll museum and boating facilities another added attraction here is a 20 million year old fossilized tree which was gifted by the Geological Survey of India. 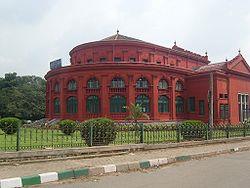 This monumental structure was built in the year 1915, this was constructed in the classic European style with Tuscan and Carinthian columns, this was constructed in memory of Sir K. Sheshadri Iyer, who was Dewan of erstwhile princely state of Mysore from 1883 to 1901. This is an very impressive building with red in color with gables. Now this structure is used as Sheshadri Memorial Library, which has an covered area of 300 km², which is governed by the State Library Authorities since 2000.

Tourist Attractions in Cubbon Park - Bangalore & How to reach

Cubbon park is my favourite place in Bangalore. I used to go there regularly with my husband after our wedding. Even after we had kids, it was a lovely place to spend time with family and kids. There are lot of place to run around for the kids and every one enjoys the pleasant atmosphere there. Eventually, we moved out of Bangalore but we still visit Cubbon park every time we visit the city. In last few years, Bangalore has changed a lot and so is the park. Now this place is crowded with lovers and unmarried couples occupying almost all benches and it is an odd sight for us to watch them all.

I wish the park authorities pay bit more attention to this park and bring back the glory of the olden days.

I would still say Cubbon Park is one of the best parks in Bangalore.