Sivaganga or Shivagange is a hilly Pilgrimage for Lord Siva worship cum picnic spot very near to Bengaluru City. The picnic place is on the N H – 4 around 50 km from Bengaluru to Dobbaspet and 6 km from there. It is visible from the N H 4 (Bengaluru - Tumkur Road). The hill is very tall. The hill has 4 different face appearances from the directions. The face at East will appear to be like that of a bull. The South face is like a Siva Linga; West like Ganesha and North is like Cobra (a snake). There are 2 temples dedicated to the Lord Gangadhareswara one at the foot of the hill and the other on the hill at almost 5 km by walk. For the Bengalurians Going to the Sivaganga (Sivagange) hills will be a quiet, surprising and a totally different experience from the maddening crowds, bustle and busy schedule rejuvenating the mind and body. 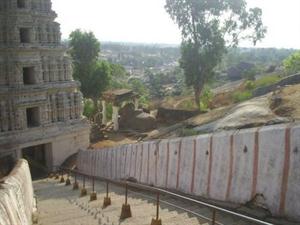 Sivaganga (Sivagange) has another name - the Dakshina Kaasi. The main temple is a cave temple and the main deity is Gangadhareswara. The goddess is Honne Devi (Swarnamba). The entrance to the cave temple of Sri Gangadhareswara is at about 260 steps from ground level. At the entrance there is a tall Gopura (temple tower) which is about 120 feet. There is a small hall on entering through the Gopura. From this hall there is an entrance to the cave temple. The Siva in the form of Linga is inside this cave. It is believed that the founder of the Bangalore City, Kempe Gowda used to patronize this temple. It is also the belief that the ghee used on the Linga here turns into butter (a reverse process as normally ghee is prepared from the butter). There was a 4 minute video clip of these phenomena on You Tube which is removed for copy right problem. Perhaps a serious search may find a clip on this. On the rock floor behind the sanctum sanctorum (Garbha griha) there is a hole where a hand can go inside. Devotees/pilgrims try to touch the water in the hole by putting the hand stretching inside while lying on the floor. It is believed that if one can touch the water inside, he is lucky and without much sins. If one could touch the water inside his/her wishes are expected to be fulfilled. Behind the shrine there is a Teertha kambha (holy water pole). This kambha was built by the King Narasimha 1. It is the belief of the local people here that on the day of Makara Sankranthi water will spring out of the kambha.


On the way to and fro of Sivaganga hills 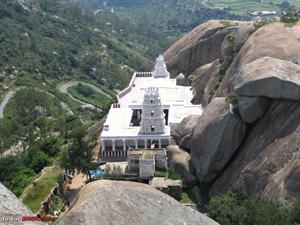 On the way to the temple there are mantapas and the 2nd one is known as the Girija Kalyana Mantapa with the walls of mantapa having full of carvings.

There is a shrine for the Nagadevathas (snake gods). People go there and worship the Nagadevathas. On taking to the left one can go to the hill top. There also a mantapa is made may be as a rest and relaxation place.

About the 200th step there is a statue of bull Nandi on a pedestal of 8 feet. There are few other Nandi statues on the way to the top.

There are many shrines of deities on the way.

As the hill is tall a breath taking view for a long distance with the settlements and a pushkarini (temple pond) far away will be available from atop. There are railings all around and hence there is no necessity for anxiety. The climb is not easy as at some places the climb is pretty steep. There are railings on either side of the climbing path to hold.

There is one natural water spring with a water body called the AntharaGanga inside a cave. Some say that people can go into the cave and the water level will be only up to waist level. But it is better not to try out. There is another one by name Patala Gange on a big rock in a depression. There are steps to get down. People can get down and touch the water. The place will be dark and it is better to be cautious. Since the water is below the surface level of the rock it is called the Patala Gange.

There are other few fountains or water pools on the route. These springs or pools do not dry up at any season. There is one spring known as "Olakal Teertha" which is in a rock hence the name.

One can find a medium sized tunnel on the way to Sivaganga hills which is supposed to have connected to the main center of that at Bangalore in the olden days. Now after a few steps inside the tunnel is closed with wall built inside blocking the tunnel. Bengaluru founder Kempe Gowda was believed to have used this tunnel to travel.

The climb up and climb down will be an experience in trekking.

Throughout the climb both ways steps/notches (some places small) with railings on both side are made for ease.

Elderly people may avoid the trip.

If no plan to go back to your place by afternoon, it may be a good idea to take the food items.

At some places on the climb we have to be on the lookout for the way as it may not be noticed as there are several awe inspiring ledges overhanging.

It will take easily about 2.5 hours to climb up and the return may be lees by about half an hour.
View from top of Sivagange Hills

Only small petty shops with water bottles, soft drinks like maza and coconut water and cucumber can be found. Eatables may not be available.

It may be a good idea to have water bottles, sun glasses, caps etc if one is inclined.

It is advisable to leave Bengaluru before 6 am for avoiding traffic. In the summer it will be very hot.

At some places there are squads of monkeys who will search for eatables including those for offerings at the temples and hence it is advisable not to take any offerings. In the process of search even non eatables like camera, cell phone etc may be snatched and thrown down as they have no use of these gadgets. After the throw the items will be of no use to us as it may not be possible to retrieve from the place of fall or damaged by the impact. It is better to keep all items in non transparent strong closed bags so that items are not visible.

There is a spot called 'Shanthala drop' on the way up. From here the drop to bottom is about 500 feet. The spot got the name due to the fact that Queen Shanthala committed suicide by jumping from here to death. Shanthala was the wife of king Bittideva more popularly known as Vishnuvardhana, the most famous king of the Hoysala dynasty

Sundays, public holidays and Maha Sivaratri days there will be huge rush of visitors and devotees/pilgrims to the temple and hill top.

Sivaganga (Sivagange) is near to Tumkur (20 km) Bengaluru (around 60 km north - West). KSRTC buses are available from both places but from Tumkur the frequency may be more. From Bengaluru to by own vehicle persons have to take the NH 4 (Tumkur Road). At Dobbaspet do not take the flyover bridge but take the level road and at the junction take to left Road to Sivaganga. Dobbaspet comes after Nelamangala town. From Dobbaspet Sivaganga is about 6 km. Sivaganga is a small village (hamlet). The road from NH to the village is fairly good.

There are many places around Bangalore which are worth touring but unfortunately less known to people. Shivagange is one of them. It is popularly known as Dakshina kashi or South-India's Kashi! Lately it has good tourist attraction. Karnataka's tourist spot shivagange has many amazing features. It is a must mist for adventure lovers and trekkers! This article gives a brief description about South India's Kashi,Karnataka's tourist spot Shivagange!