Karnataka State is a paradise of natural beauty mingling with the beauties created by the human beings. The natural beauties include the National Parks, Tiger Reserves, waterfalls and hills etc. Many of these are still not known to the human beings. The man made include monuments like of Belur, Halebeedu, MRS dam and such others created by the erstwhile dynasties that ruled Karnataka and later by the genius of an engineer Sir M Visweswaraiah. These mixed beauties are spread throughout the state of Karnataka. The Uttara Kannada district is at the North West end of Karnataka State having its share of the natural wonders. Let us have a look at some of the waterfalls, which are not yet known widely by people, of Uttara Kannada District of the Karnataka State in India. The Uttara Kannada district has its share of the nature's bounty in the form of pristine forests, mountains, beaches, rivers and waterfalls. This district may perhaps have the largest number of waterfalls comparing to other districts. Some of the waterfalls are well known and extensively visited by the tourists. There are also many which are not in the beaten track of the usual tourists haunts. Some of them are very tough to approach and requires the stamina and patience. As these places are not visited frequently by the human the places are not spoiled by the casual and careless attitude of the visitors and these places are still able to maintain their pristine beauty. The stretch of Road between Kumta and Sirsi of about 55 km have some places from where the forest paths lead to beautiful waterfalls hidden to the passersby due to the thick forests of the Western Ghat portion in the area. 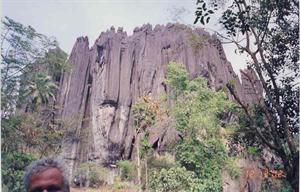 This place is 45 km from Sirsi towards Kumta and almost the same distance to Kumta also. The 2 huge rocks are the main attractions here. There are 2 temples here. One is dedicated to Lord Shiva which is in a cave. The other temple is dedicated to Lord Ganesha near to the Siva cave temple. There is a small water fall called Vibhooti (Vibhuti) at a little distance from this place. The place is in pristine forest area. This is near a place called Vaddi cross on the route from Sirsi to Mattighatta & Devanalli via Hegadekatta.

As mentioned the main attraction of this place is the 2 huge rocks part of the Western Ghats which outcrops near the village Yana. From the nearest road this place is about 0.5 km trekking distance. One of the rock hills is named as Bhairaveshwara Shikhara and is 120 meters (390 feet) in height. The other one is named as Mohini Shikhara which is 90 meters (300 feet) in height. The rocks are solid black stones formed of lime stone. This is a tourist/picnic cum religious center. The Bhairaveshwara Shikhara (Shikhara means hill) is having a cave temple with the entrance of about 10 feet wide in the rock face. This entrance leads to the cave temple. The main deity in the temple is Lord Bhairaveshwara (lord Siva) in the form of Linga (linga is the Symbol of Lord Siva). The Linga is Swayambhu (one which is crated or formed on its own or self manifested). On the linga top water drops from the ceiling of the cave. This is considered as very auspicious and sanctified. There is also a Bronze statue of goddess Chandika an incarnation of Goddess Durga. The water trickling on the Siva Linga come out of the cave as a steam named after the goddess Chandika, Chandi hole (hole means stream). This stream merges with the Aghanashini River at a place called Uppina Pattana. (Uppina means salt and Patna means town). The local people consider this stream coming out of the cave as Gangodbhava (Ganga Udbhava means Ganga emerges). The annual festival is Sivaratri (night of Siva) when a jatre - car festival (Rathotsava) – a chariot of wood is drawn around the place by devotees in procession. The festival lasts for 10 days and is attended by about 10,000 devotees. Only during the jatre festival days devotees re allowed inside the cave.

The 2 peaks of Bhasaveswara Sikhara and Mohini Sikhara have a myth associated with them. This is supposed to be the place where Lord Vishnu as Mohini killed the Bhasmasura a rakshasa (demon – ogre). There is a legend about the name of the rock hills and the Vibhoothi falls. According to the legend this is the place where Bhasmasura (demon named Bhasma) chased Lord Shiva to test his boon of making anything into Bhasma (ash) by touching. In order to save Lord Siva, Lord Vishnu disguised as a beautiful damsel Mohini lured Bhasmasura with the beauty. The demon was infatuated by the Mohini and wanted to marry her. Mohini put a condition that Bhasmasura (demon) should dance just as danced by Mohini. If he does so she was willing to marry the demon. The demon agreed. Mohini danced with various signs and steps which were imitated by the demon. In the thick of the dance Mohini kept her hand on her own head. The demon imitating kept his hand on his own head. Instantly he was turned into ashes. The 2 rocks are named after Lord Shiva and Vishnu as Mohini. The water fall is named as Vibhuti (ash) falls in memory of the demon getting reduced to ashes.

According to scientists the formation of the Ling in the cave is due to the geological activity of the cave. It is a formation due to the drippings of a type of mineral (Speleothem). This rises from the floor of lime stone due to the drippings of the minerals and the deposition of Calcium Carbonate under specific conditions. Since the rocks are having rich deposits of minerals like manganese and iron, it is only a question of time that the place will be vandalized in the name of mining for the rich minerals and ores. 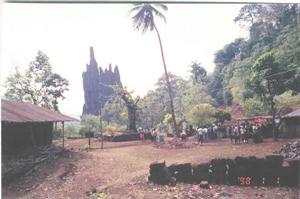 The beautiful place Yana is very near to a natural waterfall known as Vibhuti Falls. 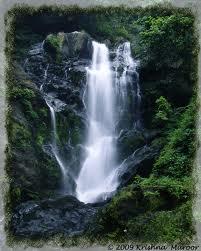 Vibhuti (Vibhooti) falls is near to Channagaru village on the Sirsi - Kumta bus route. Channagaru village is about 35 km from away from Kumta towards Sirsi and 50 km from Sirsi towards Kumta. On to the right at Channagaru Village there is a path. The Vibhuti waterfall is 3 km distance through this path. Near to this place lime stone formations can be seen. The local people believe that the lime stones here are the ashes (Vibhoothi) of the demon and the water fall was named after the ash (Vibhuti). The waterfalls are from the tributary of River Gangavali descending in two stages (steps). The water falls is not very deep. The total height is only about 30 feet drop. Out of this the first step of the drop is 25 feet and 2nd step about 5 feet. The waterfall forms a natural pool. The waters are safe to swim and the atmosphere is quiet and peaceful making it worthwhile to visit the waterfalls. And the picturesque forest surroundings and the shape of the falls make it more magnificent. It is almost a virgin area without having spoiled by tourists. There is a small island in the river which can be reached through boat. This place is a heavenly bliss from the bustle of life with the evergreen forests, landscape and the flora and fauna. A visit to this place will be a memorable one. Food will not be available near about. One has to go to Kumta or Sirsi or carry food and water or other facilities like petrol or hospital. Roads are under construction up to the huge rocks. For reaching this place local guidance will be required.

This waterfall is 6km from Kasage which is about 21 km away from Sirsi towards Kumta. This waterfall is in the River Aghanashini on the Western Ghats in Devimane area. The river falls from a height of about 200 feet. The river is a very small one and hence it is called hole (big stream). The hole is flowing through dense forest. It is a beautiful sight to behold. From Kasage one has to take the path to Hosur (not the one of Tamilnad – any new place is named Hosur in Kannada) and from there it is 2 km walk to the waterfall. The 2 km walk will be very dangerous as it is steep descend and slippery. But people go there. It is not yet spoiled by human beings. It is a worth visit beautiful waterfall. Nearest Railway station is Sirsi.

This is another waterfall 30 km from Sirsi and 35 km from Siddapura. The water fall is in the course of the River Aghanashini making a wonderful waterfall. KSRTC buses ply to a place called Heggarani. From Heggarani the water fall is few km by walk. 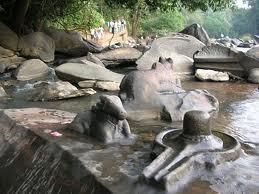 Another place around Sirsi is Sahasralinga (1000 Sivalingas - Linga is symbol of Lord Siva). This is in the River Shalmala. There are around 1000 Sivalingas carved in rocks in the river bank. Each of the Siva Lings is carved out in such a way that there is Nandi carved out on the rocks facing each of the Linga. The river water flows through the Sivalingas during the rainy seasons. It is about 17 km from Sirsi on the route to Yellapur.


How to reach the places and facilities

Some of the above places are covered under the Bangalore to Sirsi package trip. Otherwise it is better to hire jeep from Sirsi and go to these places.

There are bus services to the villages and habitations within the places between Kumta and Sirsi.
These places can be approached throughout the year. Rainy season will be difficult. Best time will be early winter.

The nearest centers for hotel, stay, hiring vehicles, petrol are Sirsi and Kumta. It will be good idea to carry breakfast and lunch etc as nothing except cold drinks of wafers may be available in these places.

Groups interested in trekking and camping at some of these places can carry camping items like tent materials and cooking materials etc.