There are many small but very good tourist places nearby to Bengaluru city. One such religious cum tourist spot is the Mahimapura village and Garuda (golden eagle – Brahmani kite) Ranganatha Swamy hills temple of the village. The temple is on a rocky hill of about 300 feet high. The main deity is Lord Ranganatha Swamy with his consort Goddess Lakshmi. Here Lord Ranganatha is in the form of Lord Venkataramana with Shankha (conch shell), Chakra (discus), Abhaya and Varada in the 4 hands. The temple is known more popularly as Garuda – Ranganathaswamy temple. In Karnataka probably this is the only temple where Garuda (vehicle or carrier and an ardent devotee of lord Vishnu) is a main deity in addition and in spite of his Lord's presence in the form of the deity Sri Ranganatha – Lord Venkateswara in the same small sanctum. The model of the temple is that of Chola dynasty with the pillars beautifully carved. Since the walls and pillars of the temple are painted the carvings may not be clearly visible. The temple of Garuda Ranganatha Swamy on top of the hill is a small one. The temple is unique for the fact that Garuda the carrier (vehicle) of Lord Vishnu is as important in this temple as his master is unlike all other temples in Karnataka where the Garuda may be present on the dwajasthamba (flag pole - post) or at the most a sub deity (upa devatha). The idol of the deity Lord Ranganathaswamy is also unique as it is a naturally formed jaggery mound (nirakari) shaped rock. There is a legend about this idol and temple . This temple had some connection with the Vijayanagar Empire as evidenced by the carved images of dancers, musicians, sages, kings and warriors on the pillars of the larger navaranga mantap (outer court yard).


These temples of Hanuman at the bottom and the Mahimapura Garuda Ranganathaswamy temple on the hill have pooja offerings only during the mornings. It is the belief of the priest's family that one of their ancestors who were doing the pooja in the temple had a dream. In the dream some sages appeared and told him that he need not climb the hills to perform worship in the evenings and the sages will visit the temples and offer their poojas to the lords. The deities of the Lords Ranganathaswamy and Hanuman are open for worship by the devotees.


The temple is not very famous. Therefore during the normal days devotees visiting the Garuda Ranganatha Swamy temple are very few. The temple has celebrations on 3 occasions and a car festival.
The Rathotsava (Car – Chariot festival) falls on the Poornima (full moon) day of Magha month of the Hindu calendar (during February - March of English calendar). Along with the Rathotsava a cattle fair will be held at the foothill. People from the surrounding villages will bring their cattle for show and competition. Along with the cattle fare the villagers throng this place for worship and to take part in the Rathotsava. It is believed that the Lord Ranganathaswamy appeared before Garuda on satisfied with Garuda's penance at this place on the Magha Day of Magha month. Because of this fact the fare is held on this day. The Lord appeared as Nirakari (like a mound – jaggery gudde). This festival is celebrated for a fortnight. Next festival is the Narasimha Jayanthi festival. This festival is celebrated on the Shukla paksha Chaturdhashi day of the Vaisakha month of Hindu calendar (during May of English calendar). As the name it is celebrated on the birth day of the Lord Narasimha (an incarnation of Lord Vishnu in the form of Lion head and hands with human body. The Lord took this incarnation to kill the Demon king Hiranyakasipu to protect the universe from his tyranny. Another festival is the Janmashtami celebration. This falls on the Krishna paksha (dark half of moon phase) Ashtami thithi when Rohini star is in ascendancy in the month of Shravana of the Hindu calendar (during August – September of English calendar). The significance of this day is known to all the Hindus. This is the day on which the Lord Srikrishna, the Jagadguru was born. The Bhagavad Geetha an encyclopedia or the quintessence of the Hindu philosophical way of approach to life. Within about a month the Navaratri (Dasara) festival comes. This is held during the 1st 10 days of the waxing moon in the Hindu calendar month of Aswin (September - October of English calendar). This festival is of 7 days of low celebrations and on the next 3 days major celebration, culminating on the Vijayadasami day. This festival is to commemorate the killing of the terrible demons led by Mahishasura (demon of the form of buffalo) and liberating the universe from the tyrannies of these demons.

The Mahimapura temple is about 47 km from Bengaluru. It is a 1.5 km deviation on the Tumkur Road (N H 4) at 45 km from Bengaluru or around 10 km from Nelamangala toll gate where a sign board of Mahimapura can be found on the right side pointing the direction. On the left side there is a cross Road with an arch. Take this cross road to the left here as pointed by the arrow and drive 1.5 km to reach Mahimapura a hamlet (small village) at the foot of the hills. From the foot of the hills on the west side people have to climb up about 300 steps. There are steps made on the rocks to climb and steel railings are provided on both sides to hold on for support. Those who want to trek can go to the South side and climb by trekking to the top. There are buses from Bengaluru to Mahimapura run by KSRTC but the frequency will be less. But from Nelamangala there are private buses plying to Mahimapura hamlet.

Mahimapura is not even a village but only a hamlet. Hence there is no point of expecting any eat out joints there. But the Poojari's family will arrange for the food requirements if any. If only small groups of 3 to 5 persons are there, they can go to the village and inform the family of the priest who will make arrangement for vegetarian food which may cost around 50 rupees per person. If the group of persons will be more the priest will have to be informed well in advance for making arrangements for food. However on the route to Mahimapura on the NH 4 there are several resorts, hotels and dhabas (Punjabi eat outs) especially in and around Nelamangala which is within 15 km. There are plenty of choices from the minimum cost roti, dhal etc about Rs 35/- each for a good vegetarian meal to about Rs 150. For those who want more comfort, choice of menu and service at a higher price food at resort will be available.

The hamlet is a very small one with the population less than 1000 people. It would have been an unnoticed hamlet like many other hamlets or small villages around Bengaluru or other places. But due to its cultural heritage and the unadulterated natural beauty without having much exploited by the greedy human beings, it is a bit different from other such villages. It will give a soothing effect to the mind of those who are under tension of the hustle and bustle of the city. The hamlet is crowned by the ancient Mahimapura Garuda Ranganatha Swamy temple on the hill top like a jewel in the crown. The hamlet may not be famous but the location is special and there are some films songs and dance with popular heroes and heroines shot in this place. And through the Kannada films those who are avid film goers may find the hamlet a familiar one. But with all these soothing factors of the village the maintenance stands in cruel contrast with the negligence, unmindful and mechanical whitewashing of the stone carvings of the pillars obliterating the magnificence.


From the bottom of the hill at the Mahimapura hamlet the temple has to be approached by steps numbering about 300. The steps are made by cutting out of the rocks. The steps are fairly steep and railings on both sides of the steps re provided for the support of those who climb the hill t the temple. From the top of the Mahimapura hills the Sivaganga hills can be clearly seen.

The rocks will appear to be very beautiful as if an art work is done by the nature.

Up to Nelamangala there will be traffic on the busy N H. After that it will be leisurely. But the 1.5 km stretch from the N H to the Mahimapura village will be bumpy where the road will be potholes.

At the bottom of the hill monkey and urchins will be a nuisance.

The legend about the Mahimapura Garuda Ranganatha Swamy temple 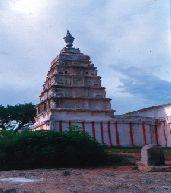 There is a legend connected with the Mahimapura village. It is supposed to be here that the Garuda performed the penance to get rid of his sin of eating the corpse of a Rakshasi (demoness - ogress). The story has it that Aditi the wife of Sage Kasyapa received 2 eggs from the sun god. The Sun god told her that when the 2 eggs are hatched in due course she will get 2 children one each from them. For several years Aditi waited for the eggs to hatch but nothing of the sort happened. She got impatient and she breaks open one of them. A baby was born out of it without arms and legs and curses Aditi to lead a life of slavery and banishment. Afraid of the consequence, Aditi prays to the Sun god who assures her that the son born out of the 2nd egg would redeem her from the effect of the curse. After some more years the 2nd egg hatches and the Garuda was born out of it. He demands food from Aditi. Aditi in turn send him to Sage Kasyapa. Sage was in penance. Garuda interrupts the penance of the sage and demands food.

The sage got angry for disturbing from the penance and tells Garuda to feed on the corpse of the demoness. The corpse was in a place near to the present Mahimapura. The place where the corpse was lying is a rock mound and is known as the Rakshasi Bande (demoness – ogre mound). After eating the corpse Garuda feels that he has sinned and seeks forgiveness from the Sage. Sage Kasyapa directs Garuda to worship the Lord Ranganathaswamy at Mahimapura. This will make him sin free. Garuda does the penance for long years and finally the Lord Ranganathaswamy appears before him as a mound of jaggery (Nirakari). This happened on the Magha Poornima day and this day is celebrated as the annual jatra (Rathotsava - Car festival) day of this temple. In the place where the Lord Ranganathaswamy appeared in the form of jaggery gudde a temple was built to worship the Lord.

Hello Sir,
Is there any contact number for this temple? Or there any bathroom facility for elders/ visiting here?
Do let me know as I am writing about the temple.
Regards
Usha