Kabbal Durga is A rocky hill with a temple of Goddess KabbaLamma at the top of the hill.it is believed that the hill got its name from this temple.Kabbal Durga is located just a few kilometers away from Bangalore City. 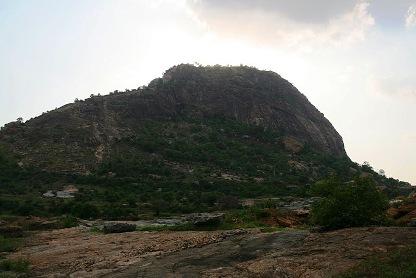 Kabbal Durga is 75Kms from Bangalore City in Ramanagaram district and is around 15kms away from the Kanakapura and 22kms from Channapatna .The Kabbal Durga gets its name from the Goddess KabbaLamma and fort (Durga in Kannada) present at the top of the hill.Kabbal durga is in village named Kabbalu at the foot hill there also temple of KabbaLamma is There. 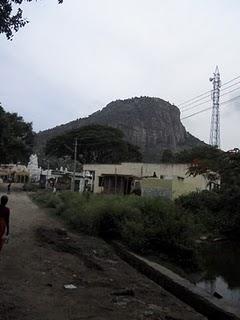 My Experience in Climbing Kabbal Durga

The fort is built over a 250m high monolithic rock, with rather steep surfaces on 3 sides and less steep surface on the fourth side. We climbed along that side of the rock, avoiding the steps that are cut into the rock. The climb is along an average slope of about 40 degrees, and gets quite steep in certain places, where one needs to be careful as there is nothing to break ones fall. After about 40 mins, we reached the top of the rock. The top is quite flat, and has a few stone structures including a temple and something that, looked like horse stables (I wonder how they got horses up here!). It was already noon and was quite hot, but it was very cool inside the temple. The views from the top were very good. We could see a number of rocky hills rising up from the ground all over us. Other than a few trees and thorny shrubs and cacti, there is not much vegetation on this hill.

How to get kabbal Durga

On the way to Malavalli from Kanakapura after 13kms there is a small place by name Satnoor. Here one has to take a deviation to go to Kabbal village. From Channapatna on Bangalore-Mysore road also this place can be reached.Though there is less frequency of state govt. buses, there are few private buses operating.


This is My experience of Trekking & Climbing at kabbal Durga.

This Article gives you the Complete deatails about Thotti Kallu falls near Bengaluru.

This article gives you the complete details about Sri Siddhalingeshwara Yogavana Hills Ashram near to Bengaluru city.

Nehru Planetarium is one amongst the popular tourist attractions of Bangalore.

One of the most visited place and loved by trekkers is SavanaDurga Hills, not very far away from Bangalore city, just a 2 hr drive and fun filled experience.

Few highlights of my drive from Bengaluru to Guwahati during lockdown. A journey to be reminisced. Phew!!! The lockdown was taking a toll on our stress level. Bengaluru is a beautiful city to live in but who does not miss their loved ones when you are alone. Though I love to travel, it took me a few weeks' time to concrete my decision on driving to Assam. Setting my geography correct with a bit of history, google and me decided on the route. Hello Google! 3000 it is!!