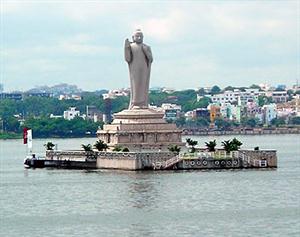 For your convenience I am providing you some information about him. Remember that Ibrahim Quli Qutub Shah was the fourth ruler of Qutub Shahi dynasty and his royal house was Golconda in Southern India. But the credit for building the historical lake goes to Hazrat Hussain Shah Wali. Up to 1930, the water in the lake was used for irrigation and drinking water needs. Another important fact you should keep in mind regarding this lake is that it is a sprawling artificial lake that holds water perennially and was built across river Musi in 1562. By reading this article up to this point, I hope you all got small information regarding the Hussain Sagar Lake. Do not stop here and keep reading the rest of the article to know more about the artificial lake of India.

Whenever we wish to see a place, we give importance to the attractions of that particular place. This is a truth. We people wants to take benefit of the money we spend for the tour. Tourists from different parts of the world as well as India are attracted to Hyderabad each year as part of the tourism. There are several tourist places centered on Hussain Sagar Lake such as the Necklace Road, Lumbini Park, NTR garden, Jala Vihar, Water Front, Sanjeevaiah Park, Boating as well as rowing facilities and many more.

Apart from this, there is a large monolithic statue of the Gautam Buddha in the middle of the lake. This 18 metre height 350 tonne statue carved in white granite erected on Gibraltar rock was erected in the year 1992. On the southern side of the lake, you can see Birla Mandir, Telugu Thalli Flyover, Andhra Pradesh Secretariat Buildings, Hyderabad boat club, Lumbini Park, Prasads IMAX while the northern side of the lake consists of Sanjeevaiah Park, Hotel Marriott, Sayedani Maa Tomb and the Secunderabad sailing club respectively.

You can also see Raj Bhavan, the official residence of Andhra Pradesh governor on the western banks of this river. It should be noted that this lake is a popular spot for sailing. An important attraction for visitors to the Hussain Sagar Lake is the Pakistan Patton tank M-47, which is a gift for the Hyderabad city from the 54th infantry division, after 1971 Indo-Pak war. This is kept for display on the centre of the tank bund. Now you may be thinking how can we reach Hussain Sagar Lake very easily? So go through the following points below which will be convenient to you.

When we plan for a trip, first importance will be given to the travelling facilities. It should be noted that this artificial lake of Hyderabad have MMTS train stations located at Sanjeevaiah park as well as the necklace road. Moreover APSRTC runs the city bus service, by connecting all major centres of Hyderabad and Secunderabad, which are the twin cities of Andhra Pradesh state, India.

I know by reading the title itself, you may be in confusion whether this is a true fact regarding Hussain Sagar Lake. By going through the above mentioned points, you got information that this lake was a tourist attraction as well as a source of food and water to the people of Andhra Pradesh. 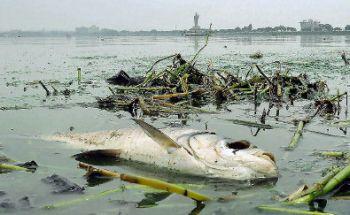 But let me clear your doubts by stating that now Hussain Sagar Lake serves as one of the main sewage collection zone of Hyderabad and Secunderabad cities of India. The entire eco-system of the lake has changed over the years. We all know the fact that when a water system is polluted, many of the species in it gets destroyed. Some of the factors that led to the pollution of Hussain Sagar Lake India are the immersion of Ganesh idols during the annual Ganesh Chatturti, dumping of broken statues into the lake, industrial effluents and many more.

You have to keep in mind that there are 4 inflow nallas namely the Kukatpally nalla, Picket nalla, Balkapur nalla and the Banjara nalla respectively. Among the above mentioned nallas, the Balkapur nalla and the Banjara nalla enters the Hussain Sagar Lake with domestic sewage from the northwest as well as western side. But the Picket nalla that enters this artificial lake carries the domestic sewage from residential areas of north eastern side and the Kukatpally nalla deposits domestic as well as industrial effluents. I have mentioned that the immersion of Ganesh idols polluted the Hussain Sagar Lake. Do you know how it happens? It's simple. We all know that some toxic as well as fluorescent paints are used for making Ganesh idols. Since they are immersed in large numbers every year, the water quality gets degraded.

On September 2011, 7 high jet aeration fountains with LED lights were installed at the Hussain Sagar Lake Andhra Pradesh in order to enhance the dissolved oxygen level and at the same time to improve the water quality of the lake. The lake improvement project is expected to be complete by March 2013. Three new interception and diversion structures (I&D) were constructed at Necklace road, Fatehnagar and Prakashnagar along the Kukatpally nalla, which was the main source of pollution of the Hussain Sagar Lake. Now there is latest news regarding the cleaning up of Hussain Sagar Lake. 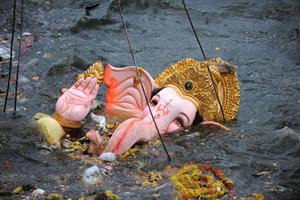 C. Venkateshwar, OU botany professor claimed that he had developed an appropriate technology called the Venkateshwara Technology (VT) for the cleaning up of Hussain Sagar lake in 15 days. Sewage treatment plants (STP) are located in different parts of the world. According to Dr C. Venkatehwar, this STP can treat only bio-waste in the sewage water but the heavy metals including fungi and bacteria are left untouched. So if this is the case, we can guess what actually happens. The water will be left unfit for human consumption. Another fact is that this STP takes 24 hours to remove the bio-waste. But the VT process removes all pollutants thereby making the water fit for human consumption. When compared to STP, this VT takes the same amount of water but takes only 4 hours to remove the waste.

Based on the efforts taken by Dr Venkateshwar, he claimed that this is a unique chemical process that will convert pollutants into harmless sludge, which in turn can be used for producing biogas, bio-fertilizer etc. He also said that safe chemicals were used in this process. In the case of Hussain Sagar Lake, Dr Venkateshwar claimed that through the Venkateshwara Ladder Technology, the required amount of chemicals that would cost Rs 40 crore can be delivered at various depths and this can be done by fitting a ship with required equipment that costs Rs 10 crore. This is the way by which Dr Venkateshwar is claiming how he could transfer the whole lake into a fresh water tank. But till now he did not have any response from concerned authorities for trying out the proposal in smaller lakes. Any way soon we can expect responses from Andhra Pradesh state government for turning the polluted Hussain Sagar Lake into a fresh water one.