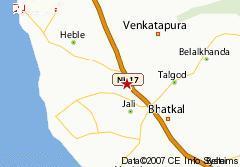 The Scenic holy place of Murudeshwar is positioned between and Bhatkal, 1 km from the National Highway. Murudeshwara, with the Murudeshwara Temple as its major attraction is a sacred place for the Hindus. It is located 16 km from Bhatkal with picture flawlwss elegance which as much fascinates the tourists as the devotees who come to worship the temple deity. 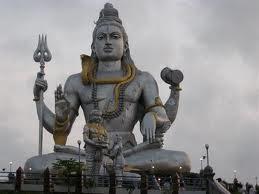 The ornamentally carved temple above the little hill of Kanduka Giri has excellent sculptures. The pleasant sea waves in the west, plenty of green hills that provide an amazing atmosphere to the temple in the east and coconut and areca trees surrounding the temple that makes it a great place for recreation. The spirit worship (called Bhuta), the buffalo race (called Kambala) and the cock fight (called Korikatta) are some of the ancient rituals performed here.

The local cuisines of coastal Karnataka along with the delicious sweets made of coconut, spicy fish curries, and several variety preparations of rice, fruit juices like mangoes, jackfruit, cashew nuts and bananas can also be enjoyed at the beach apart from the beautiful-looking temple, the blue sea waters and swinging trees. Two life-sized elephants made of concrete guard the steps of this century old temple. On the seat of a horse another shrine, the shrine of Jattiga, which is not that significant, can also, be seen. 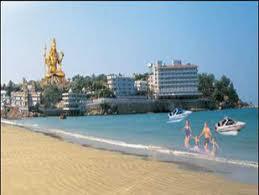 A huge fort located at the back of the temple can further be visited. It is believed that while the celebrated warrior-prince, Tipu Sultan of Mysore was exploring the beach, the fort was restored by him. If one has extra time spend at the beach, one may as well stay in the temple cottages. Enjoy the delicacies of coastal Karnataka, which include the tempting sweets, spicy fish curries and a mixture of rice cakes.

The linga which is exemplified by the temple is believed to have come out when Ravana, while lifting the 'Atmatlinga' at Gokarana, flung the cloth covering it. As one climbs up the small hill, on the seat of a horse another shrine, the shrine of Jattiga, which is not that significant, can also, be seen.

Places For Staying in Murudeshwar

How to Reach There

By Air
Goa is the closest airport. In Karnataka, Bengaluru and Belgaum are the nearest airports but Panjim which 100 km from Karwar is usually preferred by several tourists.

By Rail
The nearest station is Hubli.

Some updates about how to reach there :

By Rail : Nearest railway station is at Bhatkal.(Konkan Railway)