The Ambreshwar Temple of Ambernath is also locally referred as the Shiv Mandir Temple. Ambernath is an industrial town located in the Thane District. Ambernath is around 60 km away from Mumbai. The town got its name 'Ambernath' because of the temple, Ambreshwar. Ambreshwar means the 'Lord of the Sky'. 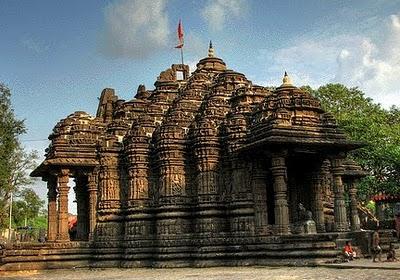 This Shiv temple is around 1000 years old. As per the inscriptions that are instated on the door that faces the north, this temple has been built by the King Chittaraja of the Silhara Dynasty. But if one has to believe the legendary tales associated with the temple, and then it is been said that this temple was built by the Pandavas.

It is said that Pandavas built this temple in just one night from a single big piece of stone. The temple has been built on the Valdhuni River. Though to speak the truth, the river no more resembles a river but still it was definitely a river at that point of time.

The construction of the temple resembles the Hemadpanthi style, which has been observed in many ancient temples built during those times. Though the temple isn't that big the way you normally see the other temples of that time, still the Ambreshwar Temple is one of its kind.

The temple has around three porches which give access to the main, central hall. One finds several stone carvings of various deities inside the hall. There are few beautifully carved pillars that hold the hall in the centre. A stone carved Nandi Bull is found in the middle of the hall way.

But the actual Shiva Linga is actually placed underground and there is a narrow walkway that has to be climbed down to reach the main sanctorum. There are around 20 steps that one needs to climb down for reaching the main Gabhara. The inner sanctorum is open to the sky and the Shiva Linga is placed right in the middle of the sanctorum.

Ambernath prominently gained importance because of this temple. The temple has survived strongly to tell its tale. The temple is still in a good shape, though one finds few sculptors withered out due to weathering. But overall the structure is totally impact.

How to reach Ambernath

By Air - The nearest airport is Mumbai, around 60 km away.

By Rail - Ambernath can be easily accessed by trains. Ambernath falls on the central route of Mumbai, and several trains including the fast trains ply regularly to Ambernath from Mumbai CST. From Ambernath, the temple is around 2 km away and hence one can always take an auto rickshaw from Ambernath station and reach the temple in a couple of minutes. The fare charged by the rickshaws is Rs.20.

If you plan to come down from Pune, then apart from the road option, one more option is available and that is by train. You can get down at Khopoli station and take a train for Ambernath from Khopoli. The time taken is around 1 hour approximately.

By Road - Ambernath can be easily accessed by roads. Being just 60 km away from Mumbai, one reaches Ambernath in just an hour or so. The best route to reach Ambernath is by taking the Eastern Express Highway and going straight towards Ambernath via Nasik bypass.

Ambreshwar Temple can be visited throughout the year. But it is best visited during Mahashivratri. As there is a big fair held during this occasion. The temple is lit up with lights and there are various events held on that day.

But now the Ambreshwar temple of Ambernath actual spiritualism is lost somewhere as many are not following the rules through which ancient people laid. Once I remember there was a well where people used to wash their feet's before going inside, the Ganga water has gone. Many people started doing their own ways.