Agra is the one of the famous travel destinations of the World. Major three heritage monuments in Agra are Taj Mahal, Red Fort & Fatehpur Sikri. Tourists attracts its Culture, Art with graveyards and stones and Religious philosophies.
During Mughal empire Agra was the capital. This beautiful town is known for its superb inlay work on marble and soastone by craftsmen who worked under the Mughals. Agra is also famous for its carpets, gold thread embroidery and leather shoes.

The name of the city Agra was derived from Agrabana, a forest that finds mention in the epic Mahabharata. During the time of the third emperor Akbar, Agra came into its own . He embarked on the construction of the massive Agra Fort in 1565.

During the time of Shah Jehan, Akbar's garndson ornamented the city with that masterpiece of Mughal architecture. He built Taj Mahal in the memory of his wife Mumtaz Mahal and also built several other beautiful buildings within the Agra fort. 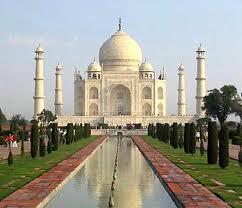 Taj Mahal is a monument of immeasurable beauty. Mughal Emperor Shah Jahan constructed this monument in the memory of his beloved wife Mumtaz Mahal, whom he fell in love at the first sight. The beauty of Taj Mahal is beyond the scope of words. The reason behind constructions of this monuments was his immense love towards Mumtaz Mahal. Taj Mahal standing on the banks of River Yamuna. It is believed that the name "Taj Mahal" was derived from the name of Shah Jahan's wife Mumtaz Mahal and means "Crown Palace".
This monument constructed with white marbles, precious gemstones etc. The purity of these white marbles, precious gemstones and its picturesque location, all make Taj Mahal the most popular.

How to Reach Agra