The Park is a concentration of huge structures which is a live proof of the rich Indian history during the ancient times. These structures includes various fortifications, residential precincts, agricultural buildings, palaces, water installations and other vestiges, few dilapidated; overall all the sign of the early Hindu capital. 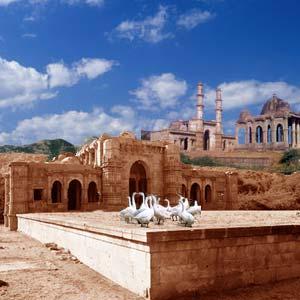 It is spread vastly on an area of around 6 km, mostly with the ruins and dilapidated remains of Champaner city, which was one of the prosperous and resourceful cities during the Pre – Mughal period. The fort is located 800 m above sea level. This hill is a result of one of the oldest rock formations, and the color of the hill being yellowish red.

The hill is completely engulfed with forests of Champaner which adds to its spectacular beauty. Within the forests, one gets to see various scattered dilapidated fort walls, bastions, and other structure ruins of military architecture. Apart from that there are various other ancient structures which relate to the Jain, Islamic and Rajput architecture.

Champaner has a lot of legendary tales associated with it, and one can find there presence in the form of various traditions that have been kept alive in the form of various folk – lore and other festivals. It is said that Champaner has lived its prosperous days sharing with few of the valiant heroes of the time. Champaner is said to be ruled over by the Chauhans, the descendents of Prithviraj Chauhan. These Chauhans have been said to have actually built the fort.

But since the route of Champaner – Pavagadh was one of the most important route to Malwa, it is been said that the grandson of Ahmed Shah, Mehmud Bagda captured it from the Chauhans. Ahmed Shah is the one who has established one of the important cities in Gujarat, Ahmedabad. As per the folk lore, Mehmud Bagda didn't find it easy capturing that fort, and it took several years of battles and siege that finally lead him to success. This is when he built the Champaner city and finally made it his capital.