About the Toy Train of Darjeeling 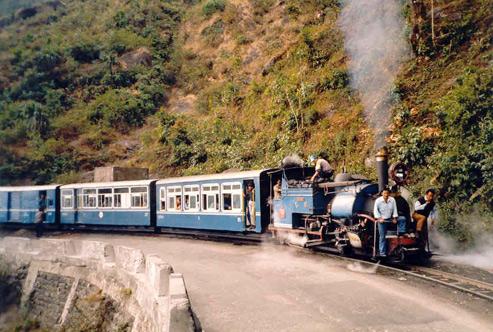 The Toy Train of the Darjeeling Himalayan Railways is a romantic approach to the Himalayas, as it is a mysterious region. The spectacular and breathtaking ride starts off from New Jalpaiguri railway station in ine of the most famous, narrow about 2 feet gauge trains. New jalpaiguri station is one of the busiest railway stations of the plains where it is more warmer than the hills. As the Toy train climbs up the hills the climate turns chilly. You are advised to take some warm clothes with you when you get into the toy train,as you might need them.

The train reaches rangtang station which is about 1404 ft above sea level and a little further the train stops for water from where you can have the best scenes of wooded through which the train will have to pass through later mountains.
Then comes Chunbati, that is, before the railway lines were constructed, travellers travelling by Palki / palanquin used to rest in a bungalow here, on their way up the hills.

From Chunbati you can have a panoramic view of the deep valley and the higher range of the mountains. Leaving Chunbati the train passes through Tindharia railway workshop to reach Tindharia Railway station.

Tindharia was the place where the travellers of the olden times used to stop for tea and this is placed at about 2882 feet above the sea level. As the train leaves the place you can see the jagged rock faced moutains called Giddapahad or the Eagle's Craig. The train later leaves Gayabari with zigzag reverses at 3400 ft. above sea level.

After this station the train stops for water near Pagla Jhora (Mad Torrent). During the monsoon rains this small stream swells up and gets big enough to wash away the road and the railway line. Shortly after this, the train reaches Mahanadi Bazar station at about 4,000 ft above the sea level. From Mahanadi the train travels westwards through Gidhapahar (Eagle's Craig) with an excellent view of the valley down below as the train reaches Kurseong station at about 4,864 feet above sea level.

As the train reaches Tung at about 5656 ft above sea level, you can have an excellent view of the Kurseong ridge. As the train passes by the side of the road, you may notice that by then, you had paased through 100 road crossings and most of the time the train runs along parallel with the cars and other vehicles. 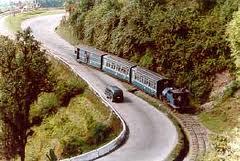 Now the train travels through Sonada at about 6552 ft. above sea level. You will be able to get a can get a glimpse of Tibetan chorten /stupa as the train passes through the bazar area of Sonada. Then the train passes through Senchel Reserve forest with Rhododendrons, walnuts, oaks, chestnuts, magnolias etc and if the trip is during spring seadon, you can see the bright blooms of rhododendrons, cream magnolias and orchids in this moss-laden forest.

There is a famous tourist spot Tiger Hill with a unique view of the Himalayas and the sunrise and the place is well known worldwide for bird-watching.
Next comes a small town called Jore bunglow, with its very narrow roads and traffic jams, since all the traffic moving in and out of Darjeeling has to pass this point. This must be the only place in the whole world where the train stops and even backs up to ease the road traffic. Then comes Ghoom at about 7407 ft above the sea level and is the highest point of the train journey. Now the train starts descending while moving towards Darjeeling. 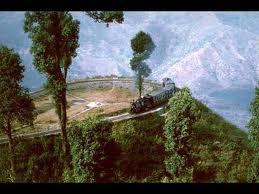 The train goes round at the Batasia Loop as if to pay homage at the Memorial to the Gorkha Sodiers, who laid down their lives in the wars. From there you can have a spectacular view of the town Darjeeling with the magnificient Kanchenjunga in the backdrop. Till you reach Darjeeling you can see the snowy peaks visible welcoming you in to the town.

Darjeeling is a small beautiful town of north east India. It is a hilly place with pleasantly cold weather. It is a UNESCO World heritage site with all facilities for travelers including special accommodations for all class of people coming across from the world. The town is surrounded by the greenery and famous Darjeeling Tea gardens. You will enjoy the trip. Here are some highlights and travel tips about your wonderful Darjeeling Tour.

This article is about best tourist attractions in Darjeeling. It also describes about the beautiful places on the way to Darjeeling. The rich greenery surrounding this area including tea plantations and the train journey in Darjeeling are also outlined.

Darjeeling Tea Bungalows: A Must in your Travel List

Darjeeling is called the queen of hills, and for the right reasons. It is one of the most romantic hill stations of India that is known for its stunning landscapes that attracts people from around the globe. There's no denying the fact that the Queen of hills has everything to offer to its visitors, and there are a number of reasons to visit the land of toy trains.