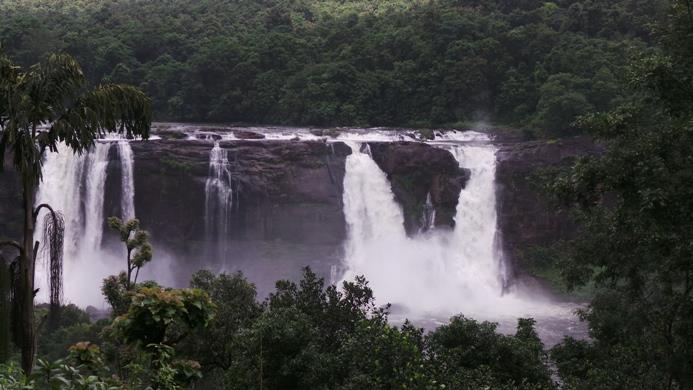 Athirapally falls is formed by the West flowing Monsoon-fed Chalakudy river joining the Arabian sea. The river emerges in the Anamudi range of Kerala, and after a plunge as "Sarpa Falls" inside the Kerala forest area and a downward flow as "Vazhachal falls, just near the forest checkpost, the river takes a final plunge at Athirapally. Flowing completely into the Forest area, the river is a major unpolluted river

The falls takes a plunge of about 80ft down the cliff before it merges. Before the fall, it splits into 4 undergoing the drop. It is one of the highest waterfalls of Kerala which is referred as Niagara of Kerala where the force water is very high especially if the monsoon is at its peak. 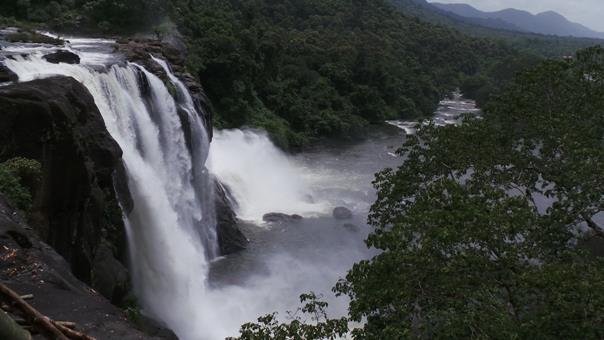 The falls has 2 view points - one from the upper location where the falls take the plunge and other at the lower point where the falls land after the plunge. If the monsoon is at its peak, going to the bottom of the plunge may be prohibited depending on the water force.

Going to the falls landing point involves a not a very steep descend down the 80 feet with curving paths leading the way making it an easy trek. In rainy seasons, the descent is slightly slippery and taking senior citizens is not advisable. 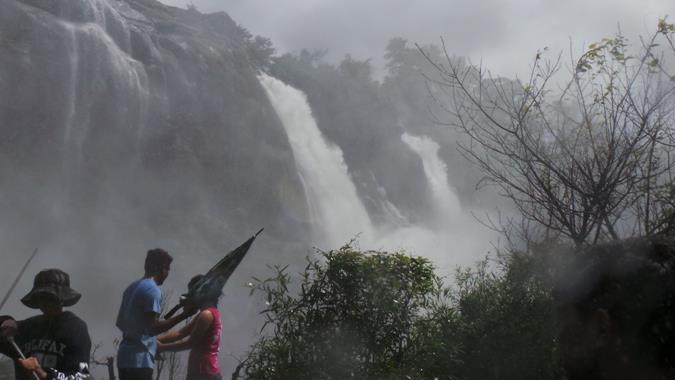 The Athirapally falls became one of the famous filming locations in Kerala from the K.Balachander directed Punnagai mannan in the year 1989 where the introduction scene showed the actor jumping off the cliff. Post the movie, it caught the attention of various directors from Bollywood and Kollywood making it a major spot for songs shooting. Regular visuals of the spot seen in the movies made the falls a place flocked by tourists

Location & How to Reach

The waterfalls are located about 60kms from the Kerala town of Thrissur & 50 kms from the town of Ernakulam. Thrissur serves as a major rail head for trains entering Kerala from Tamilnadu, Karnataka, Mumbai & Delhi and are connected by daily train services from these major cities including weekly services from Rajasthan and Gujarat. Cochin (Aluva) serves as a major Airport for the flights from all over India and International flights also

The waterfalls is located about 85 km from the scenic town of Valpaarai in Tamilnadu . The ride involves a long ride through the Kerala Forest (about 40kms) and night riding is not allowed. Sarpa falls and Vazhachal fall on the Valparai Athirapally route and route is generally devoid of traffic making it an enjoyable but cautious ride.

1. Better to buy food from the town of Thrissur or Cochin as the restaurants in this location are very limited

2. Not much of lodging options for night so better to plan it as a day journey to & fro

3. Best time to visit if post monsoons (August onwards)- Carry an umbrella/rain jackets while going to the base of the falls as the showers can leave you drenched. Its strictly prohibited to enter the water.