The summer vacations finally began. Being a preschool owner we ran our summer camp with full enthusiasm helping kids in making the most out of their 'summer vacations'. My darling sons, aged 6 and 4 years had begun cooking up stories of their friends visiting various places during the holidays. I could sense what was cooking. Husband and I ensured we make the best vacation for kids and memorable for them in every possible way! This time we wanted peace, comfort and a little adventure (definitely affordable adventure with 2 naughty boys) so we planned our longest road trip so far.
The itinerary was somewhat fixed by me, I being the travel planner (ahem ahem) didn't want to keep it completely spontaneous as with kids everything needs to be doubly sure.

Our beloved Basanti (the diesel i20) was prepared for the trip, serviced, fuel tank full, Tyre pressure checked. We decided to travel light so kept a bare minimum of 2 large bags and 1 backpack. I am somewhat fussy when it comes to carrying luggage. 2 cushions for DSs (read Darling sons). We began from Jaipur at 8:30 A.M and decided to make a halt for lunch at old rao restaurant close to Delhi on NH 8 Jaipur -Delhi Highway. The weather was pleasant with 38 degrees (phew). With our favorite music loaded in USB we were all set for the journey with utmost excitement. We made a quick halt on Jaipur Delhi highway at a local dhaba for tea and natures call. Stopped at Old Rao Restaurant after hearing great reviews for it. It was somewhat crowed and the hype was over hype for sure (you know what that means ;). On the way got some jamuns near the toll booth and spotted a small spider in one of the glasses (ewww). Nevertheless a road trip in India is incomplete without several short adrak (ginger) wali chaai breaks to which add some spontaneous hawkers selling papad, fruits, corns etc.
Well begun is half done! It was a Sunday and it made me fall in love with my not so favorite destination Delhi. We had to pass through Akbar road. The GPS helped us perfectly and I was the perfect navigator and travel planner to my perfectly driving husband ;). Akbar road was at its best, clean, smooth, traffic less (Sunday). I loved Delhi roads and kept repeating it until DH (darling husband) was at the verge of an irritation outbreak! Finally reached Ghaziabad at around 4:00 P.M and decided to stay overnight at Hotel Le Crescent Ghaziabad (will elaborate that later!). We checked in to the hotel swiftly and took a short nap, had early dinner and dozed off to sleep comfortably waiting to reach the hills the next day on time. Everyone suggested we leave early in the morning, most of the ones suggesting didn't have kids... but we decided to kick start our day on time the next morning and so slept until 4 in the morning!

Yay Yay! Kids woke up at 4 in the morning at one call. No yelling like it happens normally during school days. The hotel didn't provide early morning tea/breakfast so we checked out from the hotel at 6:00 A.M and left happily for our first destination- Bhimtal. On the way picked some bananas for the kids and got some yummy Peda (sweets) from the fruit seller. Believe me sweets never tasted so good to me as much as it did. Later regretted not buying several packs. Anyways the distance between Ghaziabad and Bhimtal is roughly 274 kms and we wanted to cross the high traffic zones of Gajraula & Moradabad, well on time. We stopped straight at Mc Donald Gajraula. Kids were super excited to eat their share of junk in this journey which they are likewise not allowed. Strangely this place Gajraula is kind of developed well for passer buys. It has KFC, McDonalds, and Dominos. All in all a paradise for the kids. As we proceeded the temperature was coming down, greenery was increasing and funnily so was the height of the trees. Again it was a lucky day for us, roads were sans traffic. We crossed Moradababad happily. The road was good, and the drive smooth. Kids went off to sleep and woke up just as we were set to stop at a local dhaba for some tea and preparing to deal with the motion sickness elder son goes through on hills. Had tea and very quickly spread newspaper on the back seats ( a tip given by a driver at Shimla to combat vomiting during hill drives, works wonders) gave a dose of Ondem medicine to son as suggested by his pediatrician. We were good to go further. We took the way from Haldwani, there was traffic jam at Haldwani and once we crossed that we steadily started our short uphill drive to Bhimtal- 21 kms from Kathgodam. The drive was smooth, the weather wasn't too cool but we enjoyed the drive which was mostly through wee laid roads. Finally we checked into our hotel, Lake Inn. We had expected the hotel to be right near the lake; however it was on an uphill drive of about 200 mtrs on a motarable road. The hotel was a cozy property with a small garden overlooking the lake. The view from the hotel was good. Kids were super happy to see the small garden and after that long drive from 6.15 a.m to 2.30 p.m they just needed some time to run and play. We gave them that time and ordered lunch. Believe me the food was superyum!!! It tasted heavenly. After that hearty lunch we just took as nap and enjoyed tea in the attached balcony of the hotel.
In the evening we decided to walk down to the lake. We as a family barely walk when in our city but are always on our toes when traveling. Even kids love walking and exploring the place on foot. Bhimtal Lake is beautiful although surrounded by hotels all around. I wish the Hotels in Nainital were somewhere on one portion and these beautiful taals on the other, still for us the sight was beautiful and weather pleasant at 22 degrees also. There were fun activities at the lake for kids and boating. There were adventure activities easily available at Bhimtal like paragliding. The place is small and still developing. There wasn't any mad rush and there isn't any mall road here as yet, there is just a small market. We retired to our hotel totally tired after that walk and again had a hearty dinner before sleeping. Next morning we were to head for Nainital. This journey was purposely planned with breaks in between to keep it smooth and comfortable. After all it was our big yearly holiday that too with kids and best vacation for kids.

The first thing I do when on a Mountain Holidays is to remove the curtains early morning. As I unfurled the curtain I witnessed a magnificent view of the Nainital Lake. It looked so beautiful without any boat, noise. Awesome. Our day started with a walk towards the Shuttle service for the Nainital Zoo someway in the middle of the Nainital Mall Road. We booked the shuttle and waited for our turn till eternity. It was a long long wait. There was a token number given to us '153' however we would have never got a chance to board the shuttle had we not gone to the 'leader' who was managing it. The shuttle costs Rs 40/- per person. The high altitude zoo is somewhere 1.5 kms uphill drive through really congested roads of the upper Nainital Mall Road with hotels on both side. I would say Hotels in Nainital are completely exploited as much as an urban city. If you are heading for the Nainital Zoo wear your sneakers because you have to walk and walk and walk. There are benches on both sides keeping in mind the walking capacity of the people from plains! We somehow managed to climb up. The view from the zoo was beautiful. Just as we moved inside we saw a perfect place to click pictures. The Nainital Zoo is worth a visit if you have young kids. There are birds and tiger, polar bear, leopard. We saw the tiger really close and the kids jumped with fear and joy when it roars. Such an amazing sight. Finally we decided to climb down and again took the token for our way down. This time got lucky and got the shuttle almost instantly! Once we got down from the shuttle we had lunch at a local restaurant and had some amazing Jalebis at Chandani Chawk. Finally we boarded the taxi which took us to the various sightseeing points like Suicide point, lovers point, botanical garden, eco caves. All were beautiful; however the kids weren't enjoying it much as we did. We clicked some nice pictures at various points and retired to again take a walk at the mall road. The best part about Nainital Mall Road is that there are facilities like washroom, booking taxi kiosk, rickshaw booking booths at every few steps. Well managed and systematic. We took a rickshaw ride to the hotel and ended the day while having dinner at the hotel terrace. This view was different the lake was garlanded with lights of the hotel. The next day we were to head to Jim Corbett National Park. Hence I wanted to capture this sight in my eyes until we started our next vacation again to another hill destination. On this note I would end this blog till here as next morning we headed to Jim Corbett which will be covered in my next blog. I hope this blog made you be a part of the trip with us. 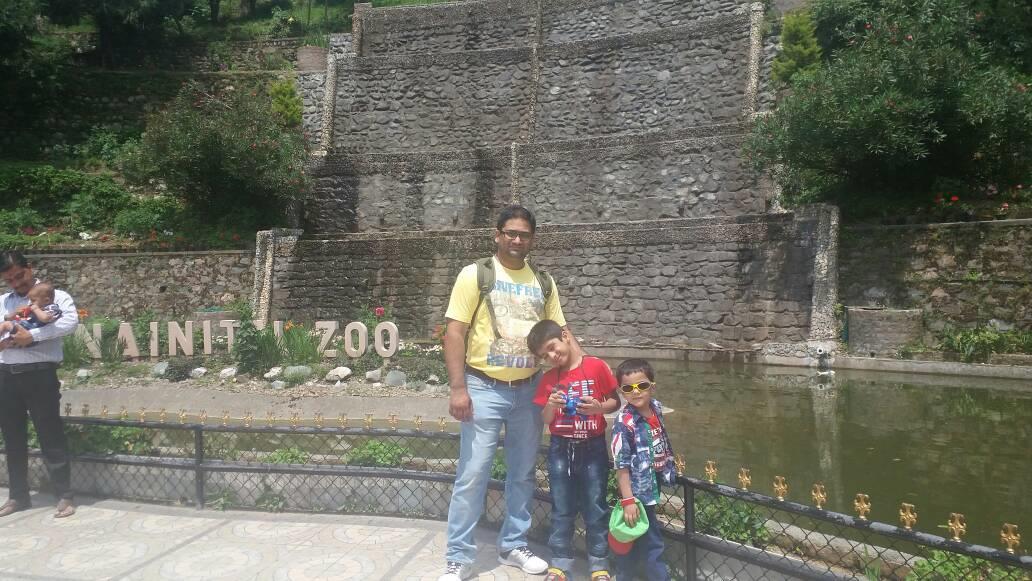 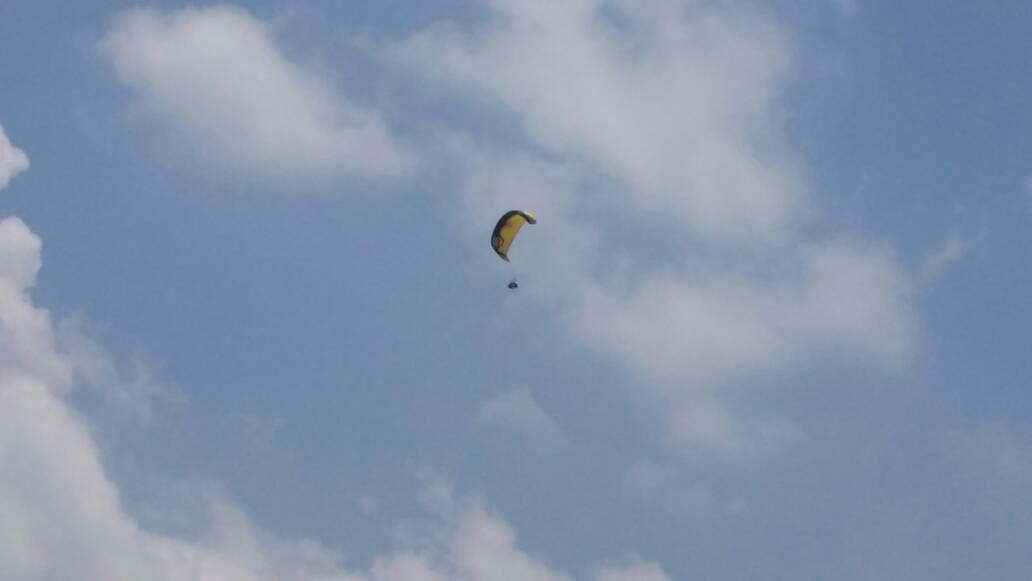 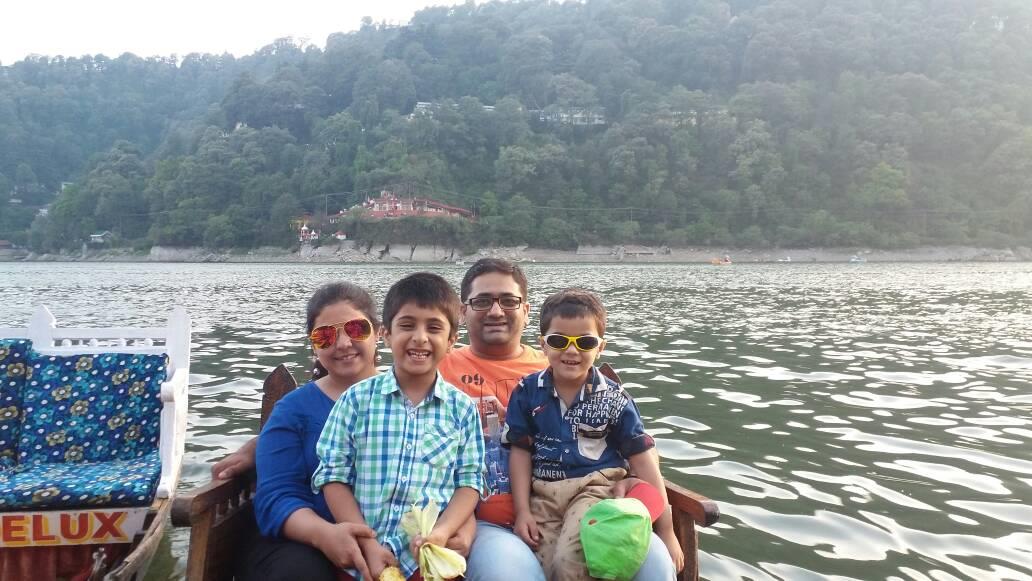 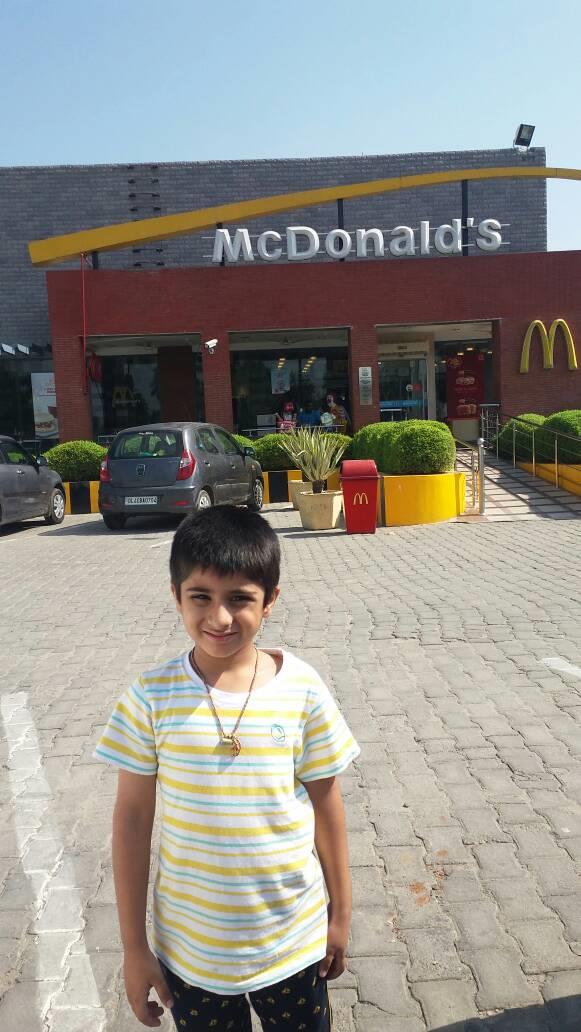 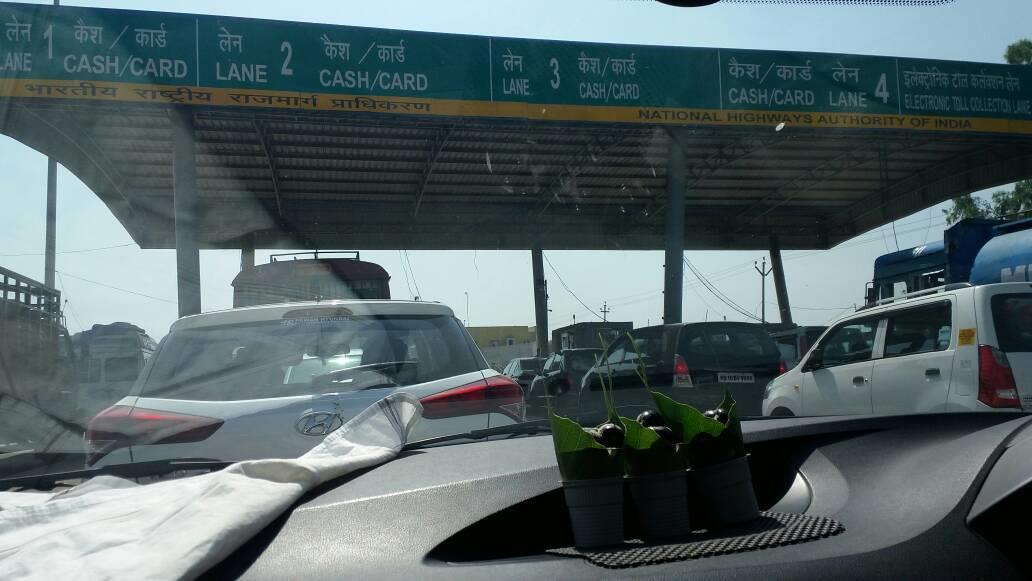 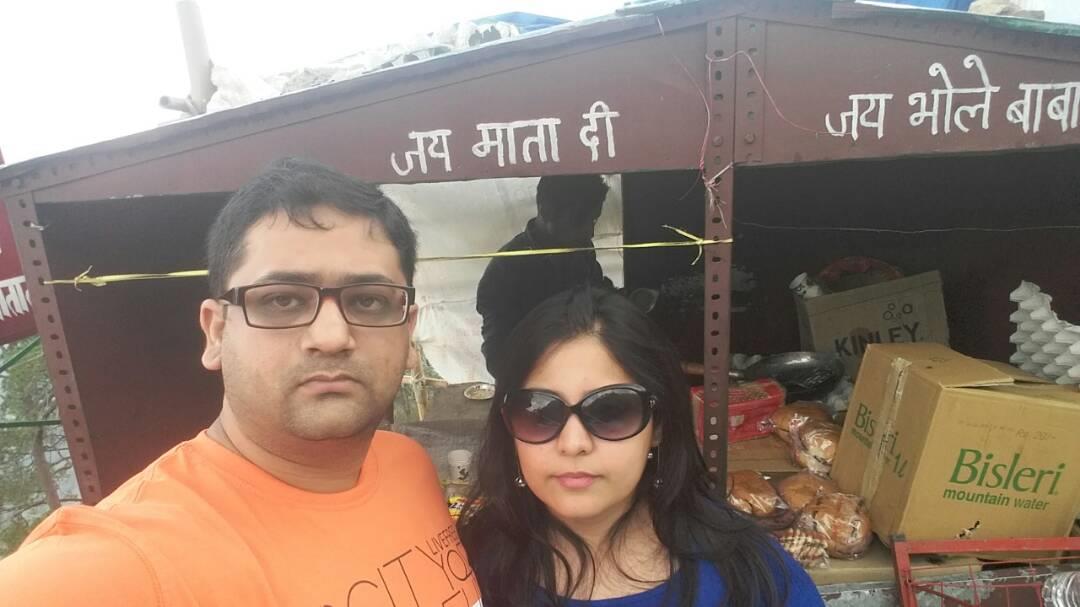 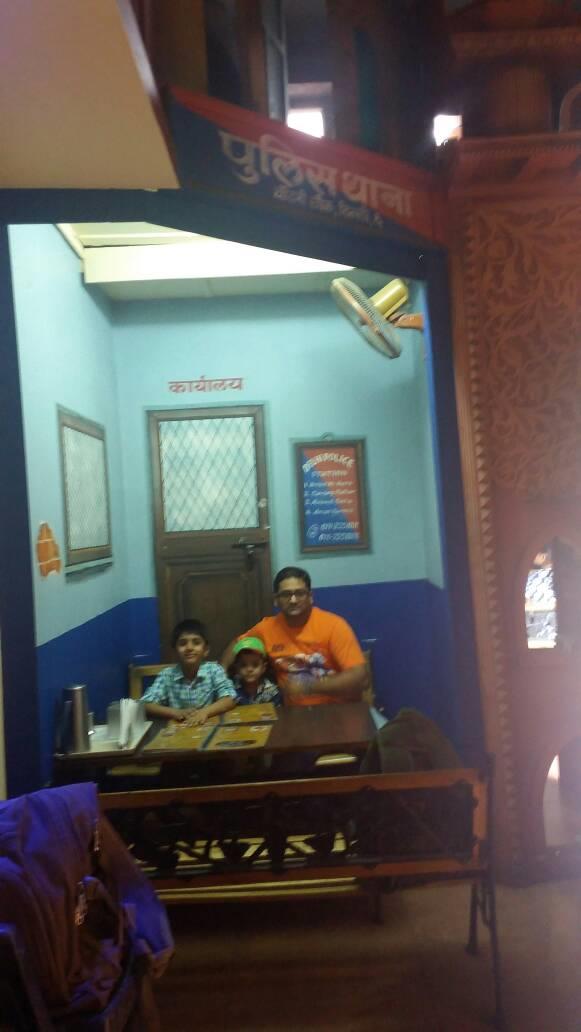 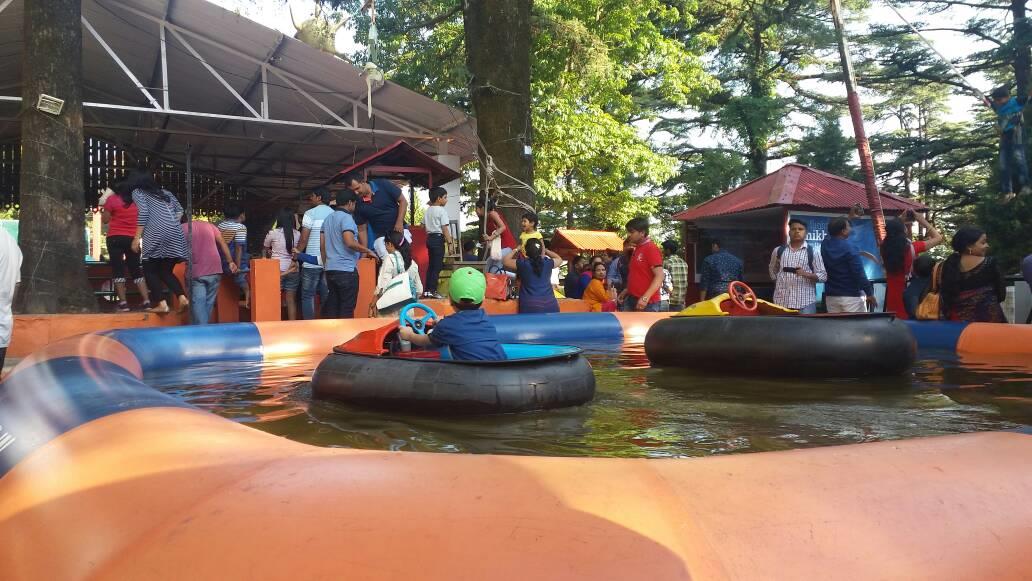 Superb trip. While reading, I also feel that I am travelling with you. Well, hats off for your self-drive till Nainital!

Lovely. Thank you for sharing such a well-planned family adventure with us. This will really help people like me to visit India soon and do the same. God bless you and your family!