My first visit to Assam had me completely mesmerized. I will be honest here, and own up to my sheer ignorance, about the state. My information on Assam was limited to the Tea-estates in Jorhat and the Kaziranga National Park and the conservation of the one-horned Indian rhinoceros. I had heard of the magnificence of the mighty Brahmaputra and could not wait to see its expanse in real life.

So, when my cousin, whom we were visiting in Assam, suggested a trip to the Bell Temple,I had no idea of what he was suggesting. Over dinner, my cousin and his wife told us about this unique temple, which the locals call the Tilinga Mandir.

A brief history of the Tilinga Mandir in Assam

The temple is just half-a-century old. It is believed that sometime in the 1960s, some workers of the tea estate noticed a black colored rock, resembling the 'Shiva Linga' surface from under a banyan tree and started worshipping it. The managers of the tea-estate decided to construct a small temple there. Soon more people started praying at the temple and offered a bell as a token of gratitude when their prayers were answered. Word soon spread and more devotees began thronging to the temple and over a period of time, it became to be known as the Bell Temple. The devotees offer bells made from all kinds of metal and in varying weights. The sheer number of bells at this temple will have one believe that prayers are answered here. And so, that keeps the faithful going. 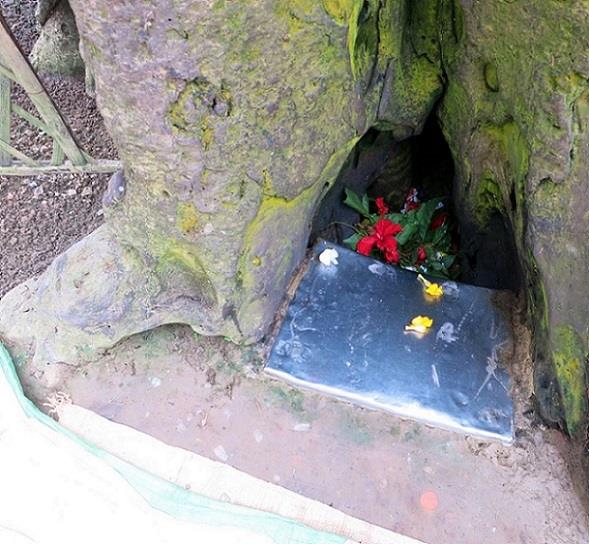 When I stepped into the temple premises, my first reaction was that of astonishment. All I could see were bells – they were everywhere. I was flabbergasted by their sheer number. It was intriguing because they made a fascinating display. Cascading as they were from metal rods, I thought of them as bouquets of bells, made of Brass, Iron, Copper and Aluminum. There were tiny bells, the size of perhaps a large kidney bean to big bells that must have weighed quite a bit. There were bells that glistened as they caught the sun and some old rusty and tarnished ones. The effect was striking though and there was a stark beauty in the presentation.

As we walked around the temple complex, we saw more bells, piled up in heaps, lying in corners, a reminder of the number of faithful who had visited this place. Every bell signifies a fulfilled wish.

Since the temple is associated with bells, the Assamese named it Tilinga, which means bell in their language. 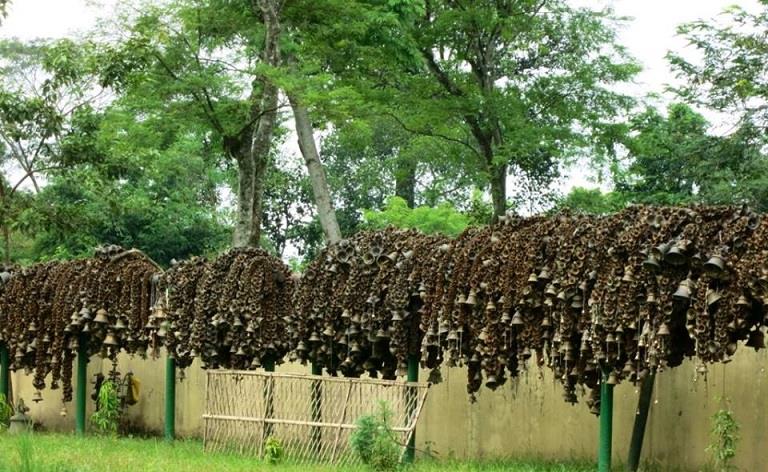 Nestled in the midst of a tea-estate

The Tiling Temple might not feature on the 'must visit' list of most tourist brochures, celebrating Assam. It is a good thing it has not become a 'touristy' place because that would bring in chaos. If you are a believer, you will appreciate the solitude that you experience here. There are no crowds, except on Mondays, which is when the worshippers throng to this temple, as it is considered an auspicious day to worship Shiva.

Unlike other temples that I have visited this one was stood out, for its austereness. There aren't any ornate carvings and sculptors or architectural grandeur. There are no idols to worship nor precious metal and pure silk adornments that dazzle. There are no religious songs belting over loudspeakers. You experience just nature and a certain calm, as you offer your prayers.

It was wonderful to be able to walk around without being jostled around or harassed by touts, who promise you a 'darshan' for a special fee. And what stood out was that this temple has not been commercialized, as yet. There wasn't a single commercial stall within or outside the temple. 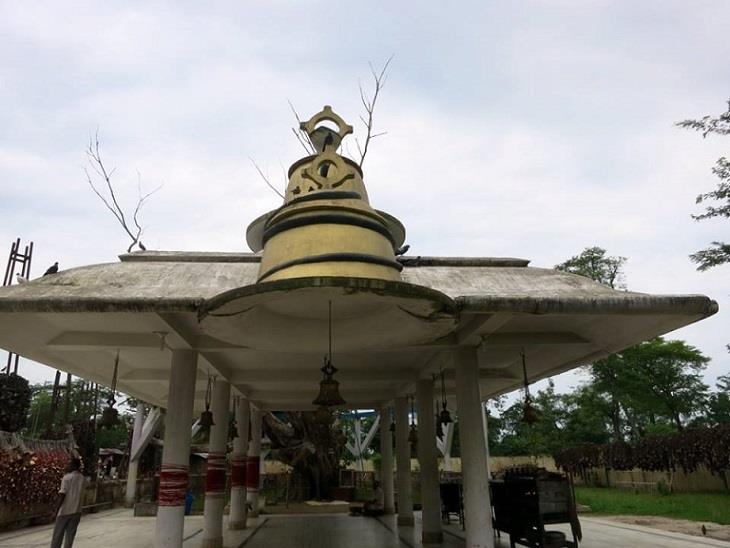 How to reach Tilinga Mandir

We were in Dibrugarh, visiting a tea estate, and as the Tavera that we were traveling in, maneuvered narrow, bumpy roads, we crossed hilly terrain dotted with tea plantations on either side. It was just tea bushes, wherever we looked, and it was a beautiful sight. The air was fresh, dewy and chill, but it felt good. 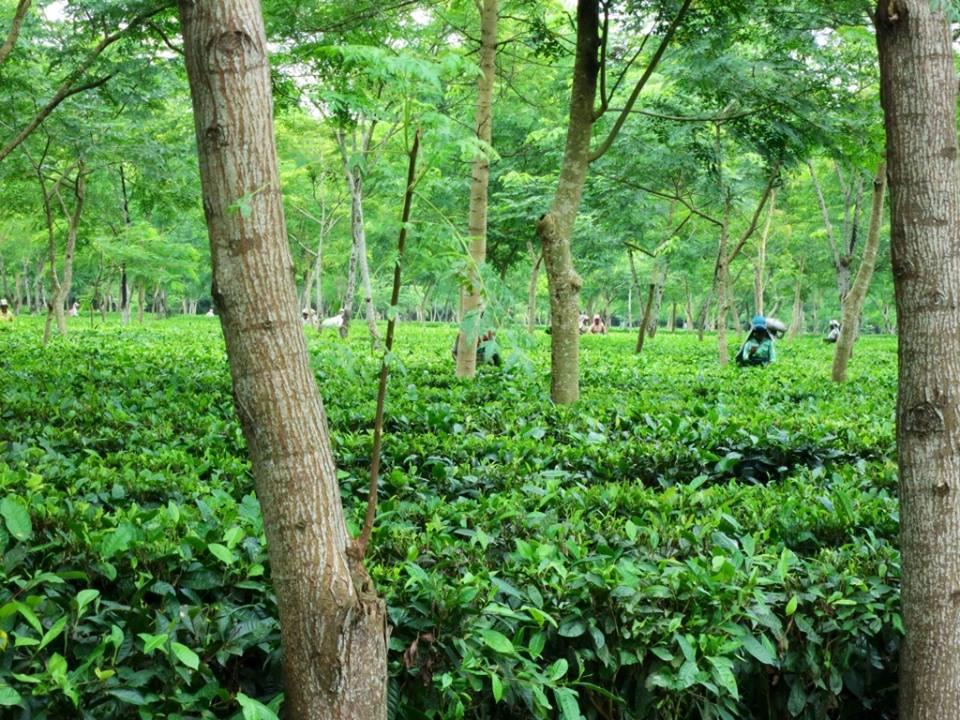 To reach the Bell Temple we had to take a bypass from the Dibrugarh-Tinsukhia Highway. If you have a local driver chaperoning you around, he would know the place. But, if you are on your own then enjoy the drive, don't be in a rush. You need to reach a town called Duliajan Oil Town, also known as Duliajan, and once there, you'll be able to locate the Tilinga Mandir Shiv Temple with the help of tea pickers. 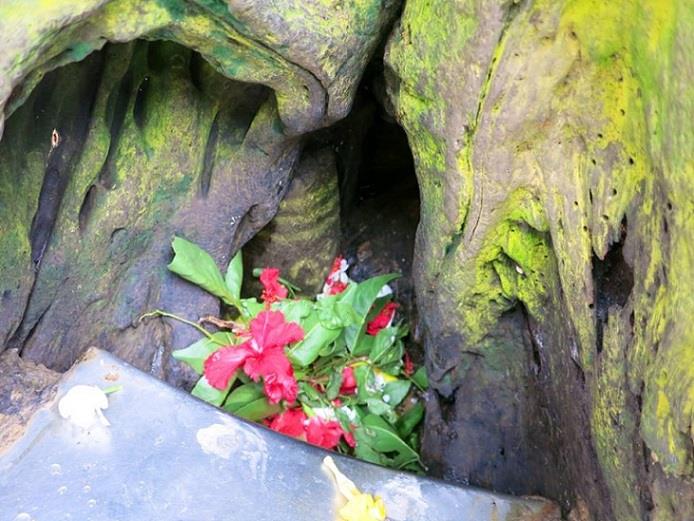 A few nuggets of information on the temple

We encountered just two persons when we visited the temple. As we chatted with them, they revealed some interesting facts about the place. They were locals and weren't born when the temple was erected. What they told us was hearsay.

For years, devotees tied the bells to the branches of the banyan tree. The massive weight of the bells began to damage the tree, which is when a few conservationists stepped in and took measures to protect the tree. It was then that special metal rods were designed around which the bells could be hung. 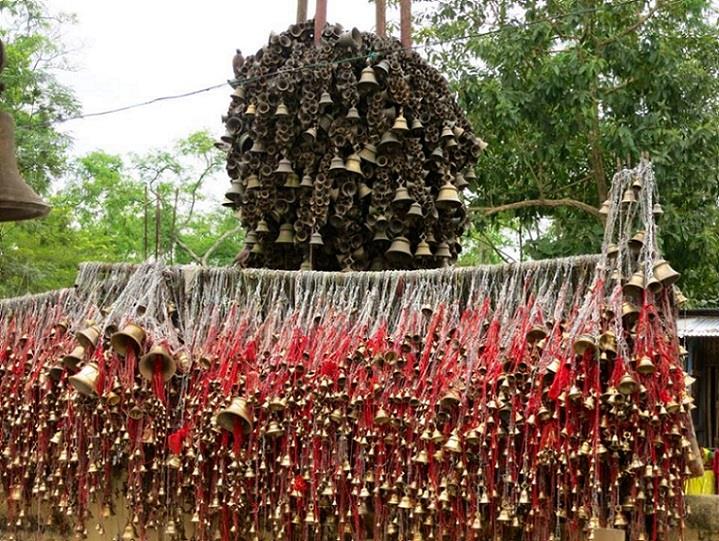 The main temple is supported by eight pillars and has no walls. There are three bell-shaped domes adorning the roof. And there is a bell-shaped dome in the front of the temple, which is bigger than the ones behind. As you approach the structure from the front, it looks as if there is one single bell-shaped dome.

Flight and trains to Dibrugarh and Tinsukia

If you are wondering how to reach Dibrugarh, you have many options. You can fly into Dibrugarh Airport from New Delhi, Mumbai, Bengaluru, and Kolkata. You can arrive by train as well, as there are many trains to Tinsukia, which is the nearest railway station.

Are you planning to make a visit to Assam? Read this article and learn more about best tourist places in Assam.

Lord Shiva is called The Devo ke Dev and the lord of Moksha. This article focuses on 12 famous Shiva temples in India and gives historical information about the 12 jyotirlinga places.

Best Hindu pilgrim places in and around Guwahati in Assam

Guwahati, Assam's capital city is replete with a number of pilgrim places like Kamakhya Temple, Navagraha temple and many more. In this article we are discussing many such Hindu pilgrim places in and around Guwahati and nearby places. Details fo how to visit and what is the best time to visit these pilgrims places are given here.

I was in Assam for a few years during my active work life and though I have visited some of the places there but this place and information about it is very new to me. Assam is always a place of fascinations for the visitors as it was considered a remote place and many people did not have much information about it. It was known mainly for its greenery and tea states. I remember when I went there I was told many things about there and many myths also which of course were totally false which I found after living there for some time. Assam has many places which can be developed as a tourist destination and many have been already developed in that way by the state Govt.

The North East is breathtakingly beautiful. I love it for its verdant greenery and the simple, down-to-earth locals, and of course, the unique handloom items to be bought.

Fortunately, I have had several opportunities to visit Assam, and each visit left me with a renewed love for the place. I will publish a few more articles centred around my experiences, but before doing that, I will need to fish out photographs from my visits and refresh my memory.