The recent outbreak of NIPAH virus has caused some concerns to the tourists who are visiting or planning to visit Kerala. The Indian and foreign media have played a key role in creating an unwanted panic situation for the tourists. Let's take a look at the situation in Kerala regarding the NIPAH virus.

There was a death reported in "Perambra" village, in Calicut district of Kerala in May 2017. The reason reported was "Japanese encephalitis" since the symptoms closely resemble that. But two more people from the same family were admitted to hospital and died quickly, which made the authorities take a close look at the cause and later revealed that it was due to "NIPAH virus", spread from the "bats" living in their well. The virus was spread through the water consumed from the well. By the time the government machinery became alert and took precautionary measure, 8 more people died within a few weeks in the nearby regions. 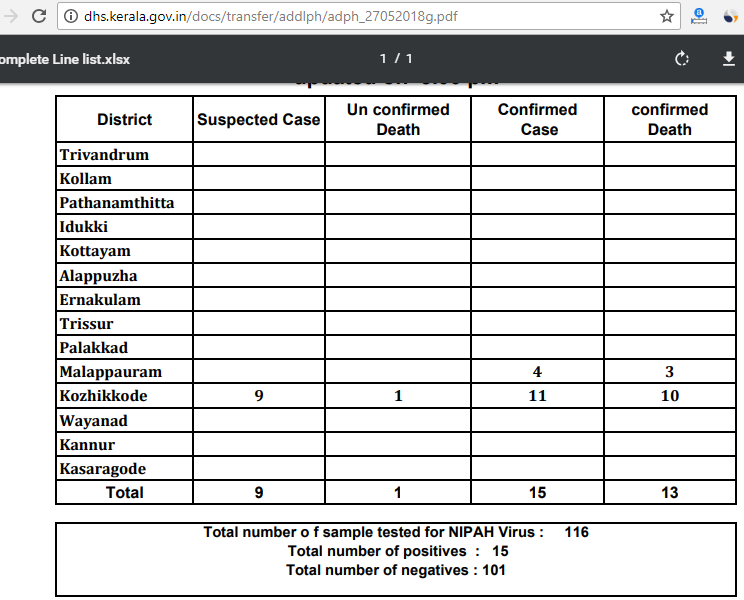 The health department and government machinery is on high alert and the virus spreading is completely under control. All precautionary measures have been taken and the people who suspect to have the disease is under "quarantine" to avoid spreading.

Some people who live close to the houses of the families who were affected have moved to other places. Other than that, the people in Kerala live peacefully in spite of all rumours and misleading information spread by the social media. There is no panic situation in Kerala regarding the NIPAH virus outbreak.

NIPAH virus information for tourists and visitors to Kerala

Have you booked your tickets to Kerala and now worried about cancelling your visit to Kerala? There is no reason to get panic. None of the tourist destinations in Kerala is affected with the NIPAH virus. You will be safe in Kerala and continue your vacation plans.

Which places to avoid while visiting Kerala

Even though the NIPAH virus is under control and tourist places are safe for visiting, if you are concerned about your health and safety while visiting Kerala, you may avoid Calicut (Kozhikkode) from your itinerary. Calicut and Malappuram are the only districts in Kerala where NIPAH virus is reported as today (23-May-2018). While thousands of people live in those places and tourist destinations are crowded as usual, you may choose to skip these places just in case you are worried about your visit to Kerala.


Precautions for tourists while visiting Kerala

Here are some general safety precautions for everyone in Kerala, not just for tourists.

1. Avoid visiting the people who are identified to be infected with NIPAH virus.

3. Avoid fruits that are bitten by birds or animals. It is believed that the NIPAH virus was spread to people in Kerala through the water were dead bats were found.

5. Avoid visiting the hospitals in Kozhikkode, Malappuram districts where the NIPAH casualties were reported.

1. Are there any restrictions in Kerala for tourists due to the NIPAH virus?

No, absolutely not. Kerala welcome all tourists to the God's Own Country. Come and enjoy your vacation here.

2. Which are the places to avoid while visiting Kerala?

All tourists destinations in Kerala are safe for tourists. If you are highly concerned about NIPAH virus and like to skip places that are affected, you may want to skip Calicut and Malappuram districts where some NIPAH virus cases are reported.

3. Will I die when I visit Kerala?

4. Is there any special treatment arranged in Kerala for tourists?

No, Kerala is absolutely safe for tourists from NIPAH virus and there is no reason to arrange any special treatment or facilities for the tourists.

5. Did hundreds of people die in Kerala due to NIPAH virus?

No, as of now, 10 deaths have been reported due to NIPAH virus.

6. Did any tourists or foreign visitors die in Kerala due to NIPAH virus?

No, there are no reports of any tourists affected with NIPAH virus during their visit to Kerala. It is a safe place for tourists.

7. What should I do if I suspect to be affected by NIPAH virus?

If you catch a fever or cold during your visit to Kerala and you are worried that you are infected with NIPAH virus, just report to a good hospital in the location you are in. Since the government is committed to controlling the spreading of the virus, they will make every effort to identify your situation and confirm that it is a normal fever or cold.

8. Are there any travel restrictions to Kerala?

No, there are no travel restrictions to Kerala. While some foreign government have announced warnings regarding NIPAH outbreak, there is no official travel ban to Kerala by any governments.

Here is the government's official page for the official news, announcements and advisories regarding the Nipah Virus in Kerala:

You can find the official government statements regarding the affected areas and number of deaths in Kerala due to the Nipah virus attack.

Here are some contact numbers for you just in case you need more information and official sources of data to plan your visit to Kerala:

Lovely article, very clear and informative, all tourists must read.