I was in Udaipur, for a friend's son's wedding, where I met up with a bunch of old friends. We extended our stay by a few days, and spent the time, exploring places of interest around this beautiful city. It was the time when the movie Padmavat was in the news, hogging primetime debates on national television, and eliciting quite a controversy. Curiosity got the better of us, and we couldn't resist the urge to visit Chittorgarh, the famed site where history was created.

We set off early, seated comfortably in a Tempo Traveller, booked the previous evening. Chittorgarh is roughly 115 km from Udaipur, and it takes just over 2 ½ hours to reach. It's a comfortable stretch on well-laid National Highways. I mention this, because it's good enough for a road trip, on a bike or car. Public transport, between the two cities, is good too.

The driver's assistant (Kuldip) acted as our unofficial tour guide. Kuldip qualified for the part, born and brought up, as he was, in those parts. He had many a tale of romance and bravery to share. Of course, none could be authenticated, but his constant jabber kept us engaged and piqued our interest.

Chittorgarh has a rich history, and it gives you a sense of being on 'hallowed' ground, where many a mighty warrior once roamed. There is a lot to see and do, in this place, that was once the capital of Mewar. Every structure standing here bears testimony to its great heritage. The imposing fort and the striking temples, the spectacular palaces and the monumental towers, all have a story to tell. They stand testimony of honour, valour, passion, loyalty and sacrifice of a bygone era.

The history of Chittorgarh is captivating, stories of battles and bloody siege. Tales of heroism, fortitude and romance, stories of death and destruction. Legends of queens and aristocratic women sacrificing their lives in Jauhar. These fascinating stories have the power of captivating an eager audience. And over the years these tales have been immortalised into ballads and folk songs. 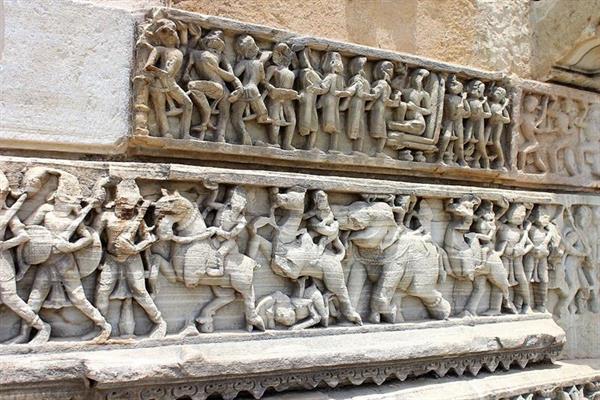 One such folklore that has been around for centuries, but only recently caught the nation's attention is that of the famed Rajput queen Padmini, also known as Rani Padmavati. Legend has it that the beautiful queen lived in Chittorgarh during the 13th – 14th century.

A tour of the Chittorgarh Fort

Once you're there, you can't stop being in awe of the place. I got goosebumps, as I stood admiring the sheer size and grandeur of the fort. It is a magnificent structure, standing atop a 180-metre-high hill, spreading across roughly 692 acres, offering panoramic views of the surrounding countryside. It has the distinction of being the largest fort in the country. That must tell you something about its size and grandiose.

The Chittorgarh Fort is one of the eight sites, in Rajasthan, declared as UNESCO World Heritage Sites. There is no concrete evidence on who built it, but historians estimate that it was raised in the 7th century, during the reign of the Mauryan Empire.

The splendour of the fort is not limited to its size and dimensions. It is also recognised for its unique and well-perceived architecture. There are 84 artificially made reservoirs around the fort, and they are a pure genius — their presence illustrates the well-thought-of construction, in medieval times. The water bodies were so designed that they could hold sufficient water to meet the water requirements for a fleet of 50,000 soldiers for four years running.

Seven gates lead to the fort; the main entrance is called Ram Pol. The gates were designed intelligently to prevent the enemy from entering or attacking the fort. What you see today are the ruins, but they paint such a compelling picture of a glorious past. Not everything is run and torn down; we were told around 65 monuments still stand, mainly palaces, temples, towers and cenotaphs. The victory towers are the most striking structures.

Kuldip regaled us with many anecdotes; some seemed farfetched, but legends are part of the belief of people. One titbit that he shared with us was that the Bhim (one of the Pandava) built the fort, in one night. Another fascinating story was on how Bhimlat Kund, one of the 84 reservoirs got its name. Myth has it that Bhim became thirsty, and there was no water on the hilltop. So, he struck the ground and water appeared in that spot.


Legend of Rani Padmini or Padmavati

According to legend, Padmavati was a strikingly beautiful princess, married to Raja Ratan Singh, the ruler of Mewar. Her gorgeous good looks resulted in her being the central character for numerous ballads and narratives. She is the subject of several folktales originating in the region. The most famous piece on her is credited to Sufi poet, Malik Muhammad Jayasi. His poem romanticised the legendary queen, giving her a mystical aura.

The ballad, titled Padmavat, reads like a fairytale, centring around talking parrots extolling the beauty of the queen and the drama that unfolded, involving Ratan Singh and Allaudin Khiji and ending with Padmavat committing Jauhar. What parts are facts and which fiction is not known.

Stories of Akbar's siege on Chittorgarh

Another bit of 'history' shared by Kuldip was that of Akbar. According to the story, Rana Uday Singh's son joined hands with the Mughal emperor, only to learn that he was planning on conquering Chittorgarh. The son returned to appraise Rana Uday Singh, but from then on, the narrative turned sketchy. Some versions spoke of the Rana winning, others of him escaping…

However, the Vijay Stambh within the fort is evidence of a battle having been won. Whether the Rana defeated Akbar's army or Khilji's troupes remained unclear.

The story of Mira Bai

I had heard of Mira Bai but was unaware that she had lived in Chittorgarh. The spiritual poet was married to Bhoj Raj Singh, the crown prince of Mewar. She is among the most illustrious Bhakti Saints, and a temple in her honour stands within the fort.

If you are in Chittorgarh for a day, like we were, I recommend visiting the following places, within the fort.

The ruins of the Rana Kumbha Palace are hauntingly beautiful. What a majestic palace it would have been. The panoramic view of the city, from here is quite amazing, especially with the sun setting in the background. 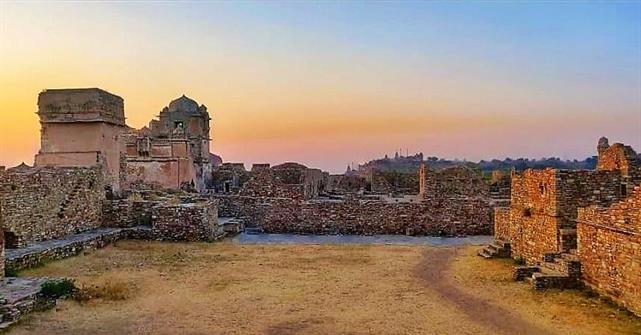 Rani Padmini's Palace grabbed my attention, even though it stands abandoned, submerged in a pool of water. It would have been heavenly, in its prime.

Temples in the fort

Considering the number of temples, within the fort, it seems that people then would have been extremely pious. There are several Jain temples in the fort, besides other famous temples, such as Adbuth Nath Mandir, Kshemankari Mandir and Kumbh Sham Mandir. The most famous temple is the one dedicated to Mira Bai. 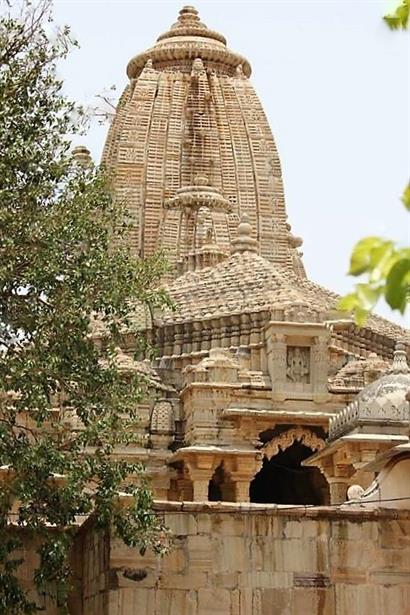 The most striking feature in the fort are the two victory towers – Vijay Stambh and Kirti Stambh. They are magnificent, tall and majestic with elaborate carvings. Rana Kumbha constructed the Vijay Stambh in 1448, to celebrate his triumph over Allaudin Khiji's army. The Kirti Stambh is older, and dates back to the 12th century, is believed to be constructed by a Jain trader. It is an imposing structure, standing tall at 22 metres. 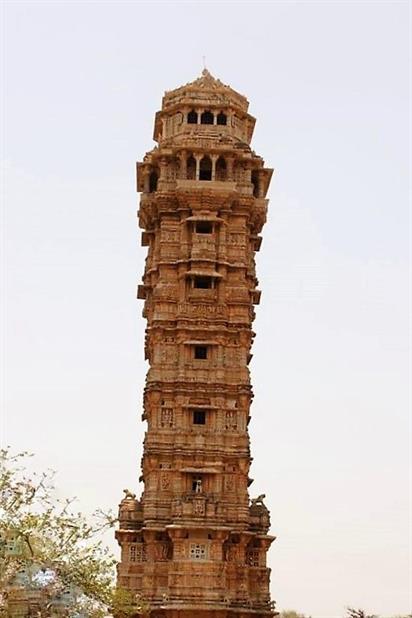 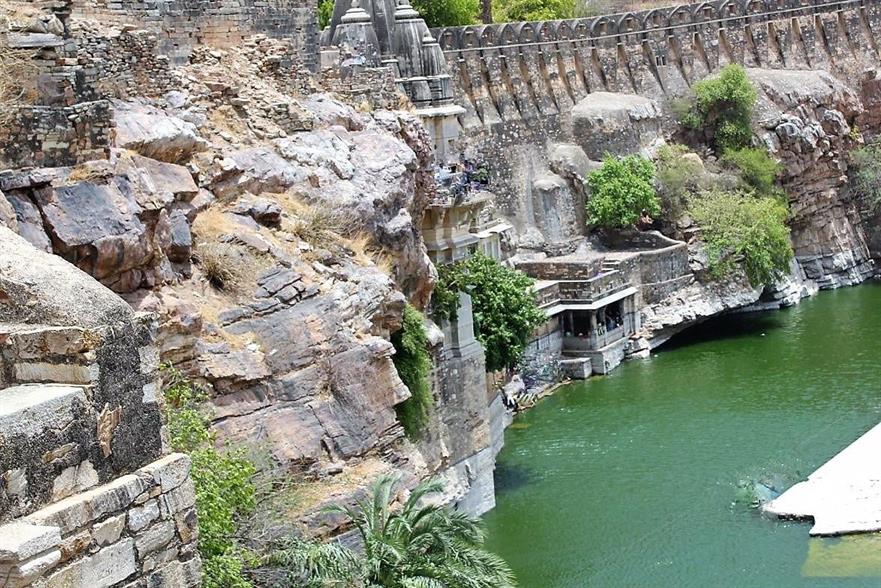 The amazing thing about all the forts in Rajasthan that I have visited is that they were exceptionally well planned, with ample water storage facilities. The same can be noticed at the Chittorgarh Fort – a rough estimate indicates that nearly 40% of the area was detailed for water bodies, in the form of step wells (baoli), reservoirs, lakes (talab) and huge wells (kund). Though, only a few remain today. Most have either dried up or taken over by shrubbery.

The most fascinating reservoir and a popular tourist attraction is the Gaumukh. It still holds water and offers a lovely view. It gets its name from the cow-shaped spout that feeds the lake. It is believed to have been a bathing pool for the queens. We were told a secret passageway connects the lake to the palaces.

Our trip to Chittorgarh ended with a tour of the shopping areas. Quite a few areas for shopping exist around the fort, such as Rana Sangha Market, Sadar Bazaar, Gandhi Chowk and Fort Road Market. And you can get some lovely bargains here. Most shops that we visited were willing to bargain and did bring down their prices, considerably. You can shop for a lot of traditional Rajasthani items. 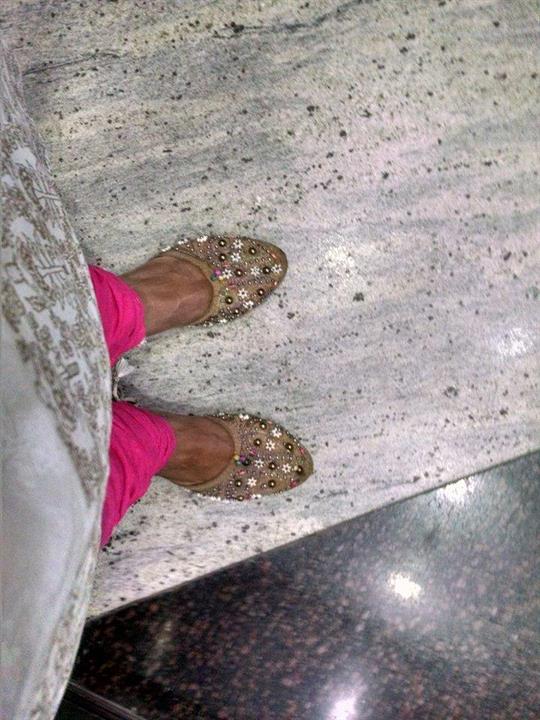 Rajasthani cuisine is different from typical Indian cuisine, it is rustic and flavourful. We had a scrumptious dinner at Choki Dhani.

It is a desert region and gets cold at night, so take along warm clothing, especially if you plan your vacation during winter months, as we did. I'd advise you to spend a couple of days in Chittorgarh and explore it; there is a lot to see here. Take a guide along, because you can get lost (figuratively) in the fort. Wear comfortable walking shoes. Carry water and something to munch. There were a few eateries in the fort area, but I wouldn't eat there.

Kheerganga Trek - A Trek to Remember

The state Himachal Pradesh is well known for its amazing treks. It is one of the favorite choices of trekkers. Thousands of trekkers come every year just to visit those treks. Among the number of treks, there is one trek that is very famous among all the trekkers whether they are beginner or expert. Even if you are a person who doesn't go to any trek before, you can also come to this trek.

A Journey to Mahendragiri - The Second Highest Mountain Peak of Odisha

8 Best Things To Do In Meghalaya
This blog discusses about the 8 best places in Meghalaya that you must visit when you are planning of a trip to Meghalaya.

Surajkund fair - a paradise for craftsmen
This article gives a brief description about Surajkund fair which is held every year in Faridabad. This fair is famous for its art and crafts. In this fair, craftsmen come and display their talent from various parts of the world.

Pilgrim visit to Navagraha temples near Kumbakonam
As the name states, there are nine gods, facing different direction and each god specifies the specialty of nine different planets. Read more to find about the position of planets, effects of the planet gods changing the direction on your life and more about the same.