Jharkhand: A Brief Intro of the State:

Jharkhand, the 28th state of the republic of India has a lot to be discovered and explored. Although this Indian state is often not considered as a mainstream tourist destination in India, it has a plethora of natural as well as cultural beauty.

Jharkhand, the southern part of the erstwhile Bihar, always has a distinct geography and culture apart from the northern part of erstwhile Bihar. After a long political struggle, it was finally converted into a separate state on 15th November 2000. Ranchi, located in the heart of the state was declared the capital of this newly formed state.

There are mainly four major cities in this state- Ranchi, Jamshedpur, Dhanbad and Bokaro. Each city has its own significance to the state.

As the whole Jharkhand region is itself a plateau (Chhotanagpur Plateau), this state is full of hills, valleys and waterfalls. Ranchi is surrounded by all the major waterfalls of the state, has a tribal cultural flavour of the state too. This city is connected with all the major cities of India by road and railways, also has a commercial airport too.

Not only waterfalls, but Jharkhand is also embedded with a lot of hills and valleys. Netarhat is a famous tourist spot at a distance of 130 km from Ranchi, while Parasnath is the highest peak of the state and also a major Jain Pilgrimage centre. The hills of Dalma and Kiriburu are located in south Jharkhand around the city Jamshedpur. I will discuss further in this post about these hill stations in detail.

If you wish to visit any of the waterfalls or hill stations and get their information in detail, don't forget to further read the full post.

Jamshedpur (also known as Tatanagar) is the hub of all the Iron, Steel and other metal related industries including the major players like Tata Steel, Tata Motors etc. This city is the industrial and commercial capital of the state. Likewise, Bokaro is also another steel city of the state and it is the home of the public sector steel company (SAIL).

Dhanbad is another major city of the state, having mainly coal mining industries located within it. That's why it is also known as 'The Coal Capital of India'. Besides coal, the crust of Jharkhand has mines of iron ore, mica, bauxite, copper, and limestone too. I think no other states in India is have such large rich mineral reserves.

So, Jharkhand has a rich land consisting not only forest, hills or waterfalls merely on its surface, but also rich in natural resources like mines and minerals too. Despite these facts, this Indian state is quite devoid of proper attention by the travel enthusiasts and tourists. Jharkhand remains one of the most underrated states of India till now. Let's discuss now about the various hills, valleys and waterfalls of the state.

While Ranchi is the capital city, it was already the summer capital of the erstwhile Bihar. Ranchi is also known as the city of waterfalls. Hundru Falls, Dassam Falls, Jonha Falls and Hirni Falls are the major waterfalls within a stretch of only 40 km to 150 km from the capital city.

Hundru Falls: The highest and most popular waterfall near Ranchi is Hundru Falls located at just 45 km from the city. Hundru Falls lies in the water course of the river Suvarnarekha. When this river flows through the hilly terrain of the region and falls from a height of about 330 feet during its course, this waterfall is created. Hundru shows its horrible form in the rainy season and turns into a picnic spot in the winters. 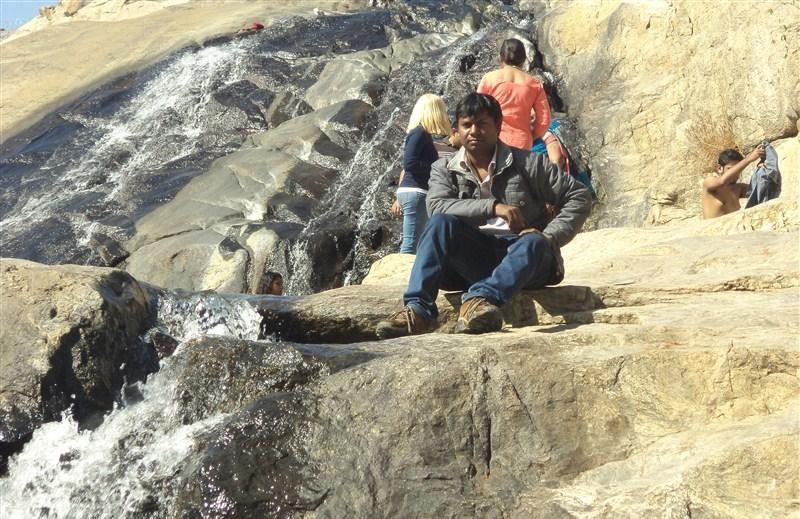 Dassam Falls: The second most popular waterfall is the Dassam Falls. It lies in the water course of the river Kanchi. It is just 30 km from the Ranchi city. Dassam is surrounded by dense forest too. Like Hundru, it also becomes a major picnic spot in winters. But Dassam Falls is also somewhat notorious due to occurrence of a number of fatal tourist accidents. Safety is needed while visiting these falls and you must avoid to attempt to reach its top. But don't worry, it doesn't mean it is an unsafe place to visit. All the accidents have taken place due to the mistakes of tourists who try to be adventurous.

Jonha Falls: Jonha is another small waterfall (56 feet high) located at a distance of only 40 km from Ranchi. It is also known as Gautam Dhara due to the historical fact that once Gautam Buddha had arrived at the place and undergone severe meditation. That's why a small Buddha idol is placed inside a small temple on the way to the fall. 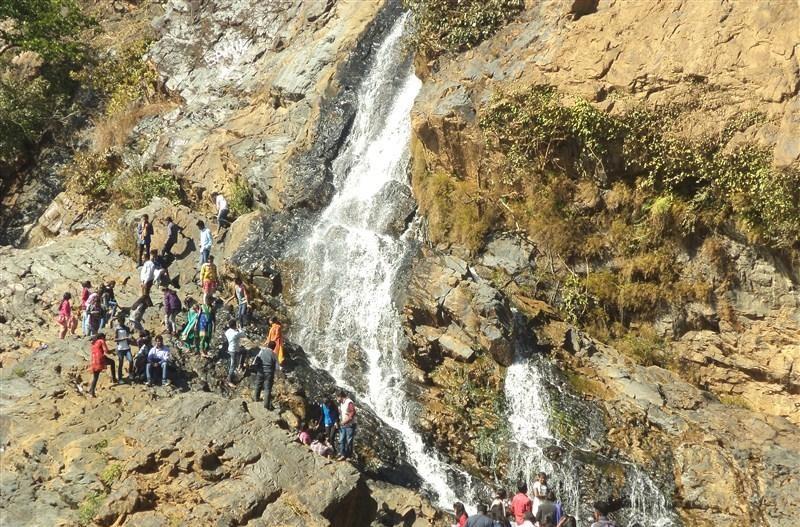 Hirni Falls: This is another waterfall which lies in the dense forest of Saranda, but it is far away located from Ranchi (73 km). Hirni is also a popular picnic spot for the people of nearby cities like Chaibasa and Chakradharpur in the winters. The major difference of Hirni falls with other waterfalls is that it is easily visible, you don't need to climb down hundreds of steps to see the falls here.

Panchghagh Falls: It is a small but comparatively easy and safer to visit falls near the city Khunti. You will not find water falling from a great height here but the natural ambience of the forest and hills all around will definitely mesmerize you.

If you want to know more about these falls, like how to reach there, accommodation details etc., you can read more here Top 4 Waterfalls of Jharkhand.

Jharkhand: A Glimpse of its Hilly Terrains

As already stated, Jharkhand has a plateau region and equipped with a lot of small hills, valleys and forests. However, these hills have not been developed like popular hill stations of the Himalayas. If the govt of Jharkhand will take any serious steps in the future to promote tourism here, these hill stations have a lot of potential to grow like Shilma or Darejeeling. I am only giving a small intro about all the four hill stations, but if you want to read more about how to reach them, accommodation details etc...you can learn more here Hills and Valleys of Jharkhand.

Netarhat Hill Station: It is actually derived from the word 'nature's heart' which the British used to call it before the independence. Netarhat is the most popular hill station in Jharkhand at a distance of 130 km from Ranchi. It has a lot of tourist attractions like Magnolia Point, Koel river view, upper and lower Ghaghri falls and the popular sunrise point. It has a height of about 3700 feet from the sea level.

Parasnath Hills: It is the highest peak and also a major Jain pilgrimage centre in Jharkhand. Located near the city of Giridih, it is easily accessible by train. Parasnath has grown like a small hill station. If you want to see the Jain temples, you need to trek on the hills. The entire trekking route is 27 km long. . It has a height of about 4500 feet from the sea level.

Dalma Hills: Dalma is a wildlife sanctuary near the industrial city Jamshedpur. It is a natural habitat of wild animals like elephants, monkeys, bears etc. The hilltop is accessible by both road and the trekking route. It has a height of about 2400 feet from the sea level. 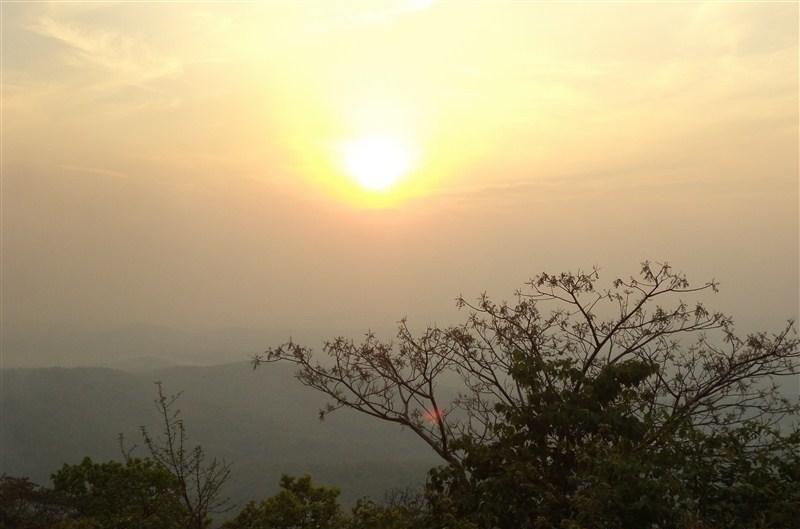 Kiriburu Hills: It is a remote hill station within the dense Saranda forest about 150 km from Jamshedpur. Kiriburu has a pleasantly cool climate like Himalayan hill stations, but unfortunately, it has not been developed so far. Mainly it is an iron ore mines area of the Steel Authority of India Ltd. The popular attractions you can visit here is the sunset point. It has a height of about 3700 feet from the sea level.
Now I hope you have enough reasons to visit the state at least once in your lifetime.

Author Bio
This post has been written by RD Prajapati, a budget traveller and blogger from Jamshedpur, India. He has travelled across a lot of destinations within India and has many continuous journeys ahead. He writes on Travel With RD.