Mystical city of Hampi has always been a dream destination of mine, finally a reality now. Be it the majestic boulder strewn vast landscape or the mythological stories of Gods and Goddesses which are intricately carved into the architectural wonders or even the magical feeling of being taken back to the era of the Kings and Kingdoms, the whole experience is indeed a surreal one. Not just Hampi, we decided to cover other historical monuments at Badami, Aihole and Pattadakal, which are a true treat for the eyes to behold.

My husband and I left from Bangalore at 5.30am Friday and crossed the Nelamangala Toll Plaza by 6. 30am. There was manageable traffic and we searched for a good Hotel for breakfast and finally found one at 8am. Sai Palace veg restaurant was indeed a good one and has very clean washrooms. We left from the Hotel at 8. 35am. We took the right turn from the Chitradurga road and we had to take multiple diversions due to flyover construction. The only frustrating thing was that there were numerous humps, almost 500 humps throughout the entire trip.

The scorching heat had almost got us dehydrated and tired, thanks to the water bottles we made sure to pack. You would love the view of gigantic windmills on the mountains and the view is worth an awe. You would find mostly huge trucks and lorries on the road and very fewer cars. When you are almost nearing Hospet, you are welcomed by the serene Tungabhadra river and the Hospet Tunnel. You would find yourself in narrow roads and traffic at the railway crossing at Hospet. By 1pm we had reached the Vijaya Vittala temple. We parked our car and took the ride on the electric car towards the temple. They charged 40 rupees for a round trip for both of us. 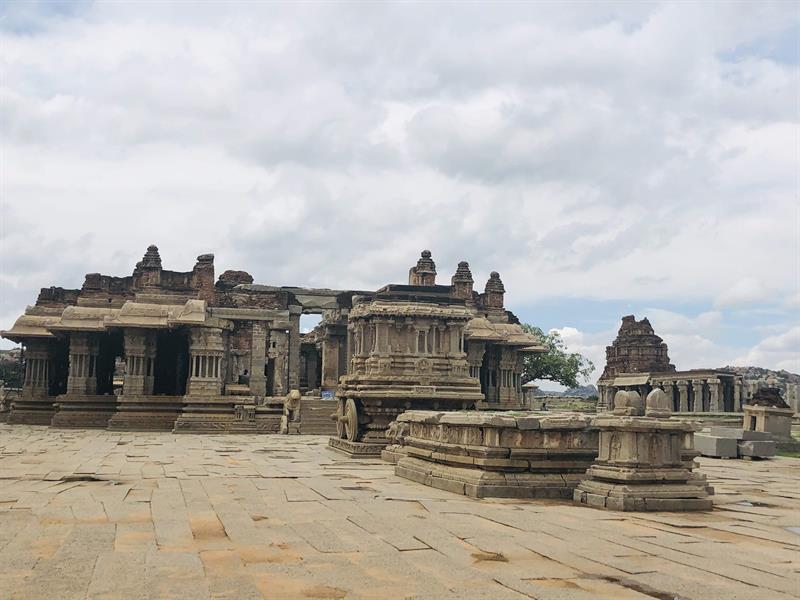 On the way, you would find the Hampi market with a large stretch of pillars almost till the entrance of the temple. Entrance charge was 40 Rs each and this ticket was applicable for the Lotus Mahal and the Museum too. I would suggest going for a guide to get a detailed understanding of the history of the temple architecture. Once you step in, you would begin to admire each stone you see here. The Vijaya Vittala temple is an architectural masterpiece and is declared by UNESCO as a World Heritage Site. This temple was built during the time of King Krishnadevaraya in 1513. This temple has 3 entrance or gopurams and the presiding deity here is Vishnu.

The famous Hampi Chariot is the one to which you would walk first as you enter(this chariot image is printed in the new 50 rupee note). 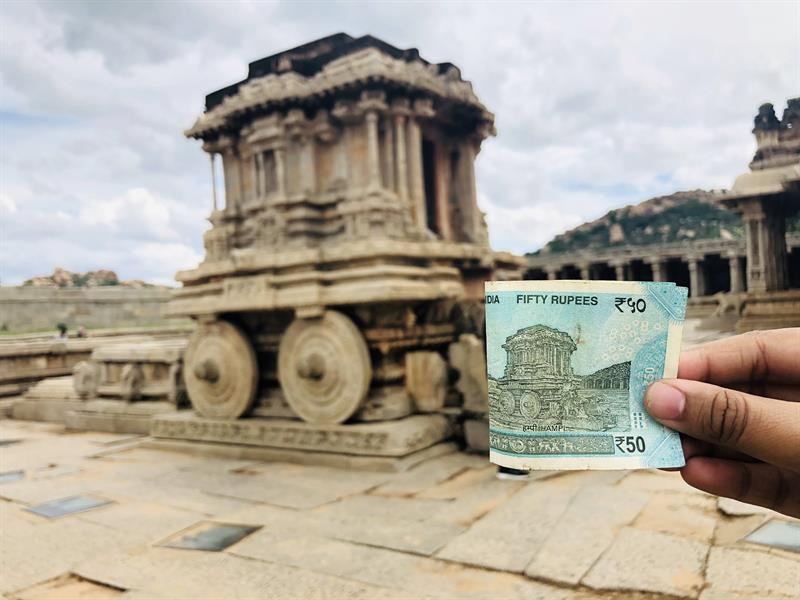 The musical pillars, the Kalyana mandapa, the kitchen hall, the meeting hall and the stories of Kishkinda Parva of Ramayana and many more are the ones you would find here. We spent some time here and rested for a while and left to our next destination at 2pm. 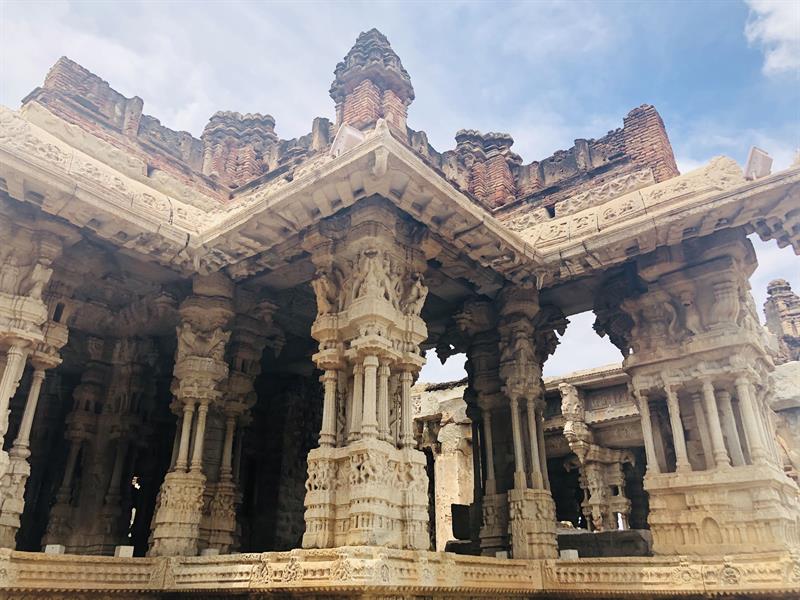 We had not stopped for lunch, as we had some fruits which we had packed. We drove for another 5km to reach the Lotus Mahal, Queen's bath, Hazara Rama temple, Elephant stable, the stepped tank ( also called the pushkarani), the watchtower and many more temples all stretched across the same place, you can either drive to these places or take a walk. 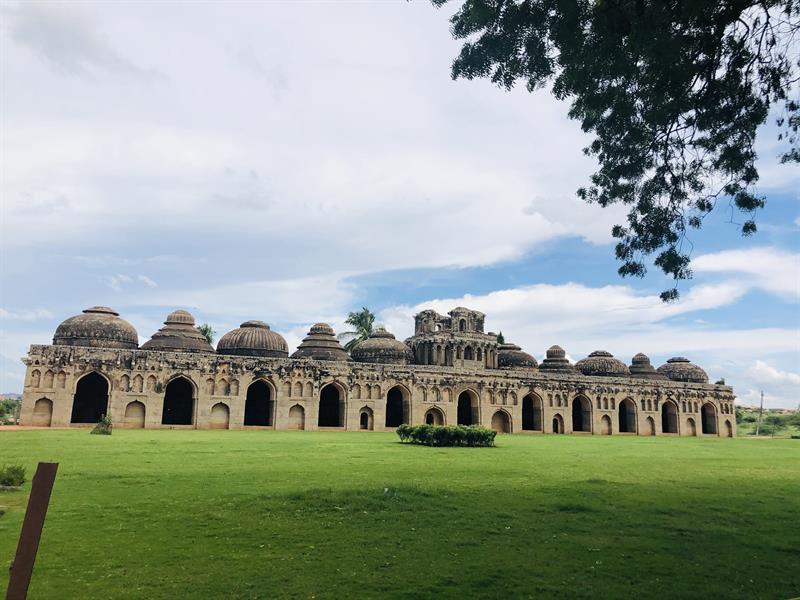 The Lotus Mahal and Elephant Stable were standing testimony to the past glory. Never fail to look at the small beautiful temple lake, with symmetrically built multiple steps on all four sides which is breathtaking indeed. 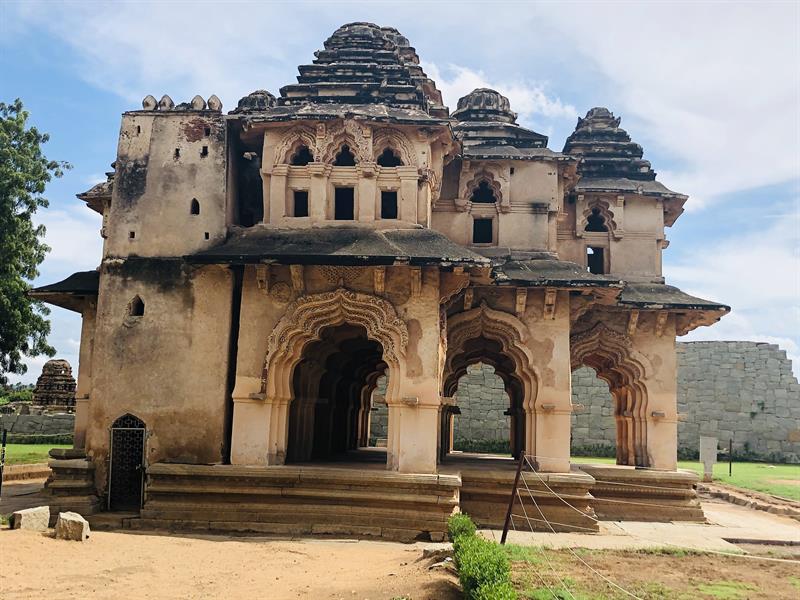 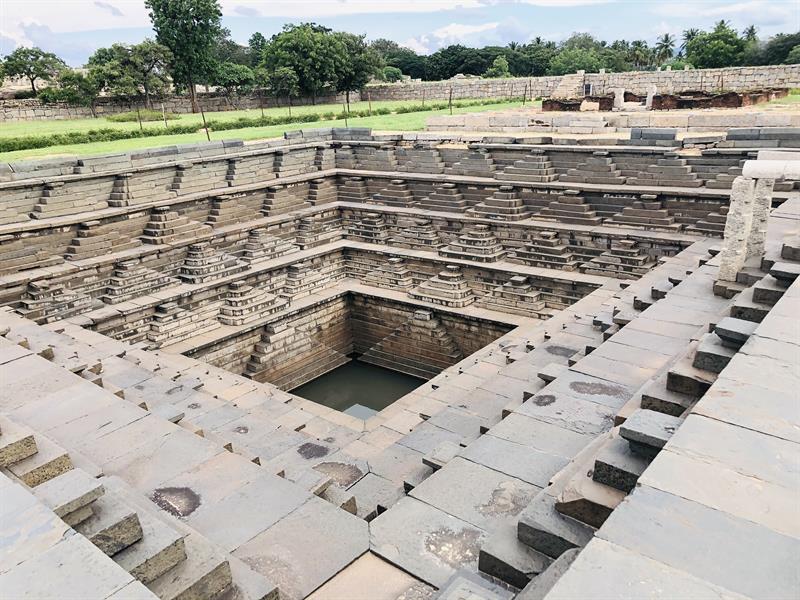 Hazara Rama temple has the stories of Ramayana etched in its walls and pillars. 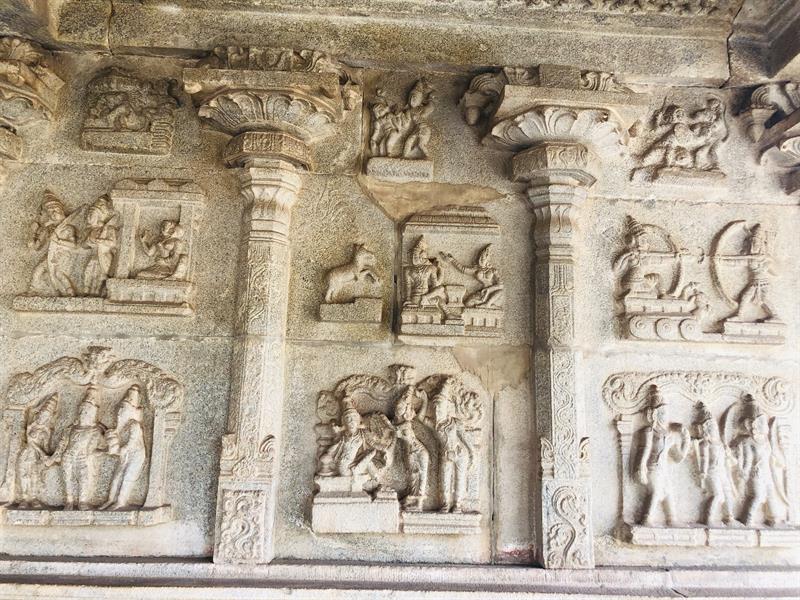 Once we finished admiring the landscape and the beauty of the sculptures, we left to VIrupaksha temple (which is 3km away).It was almost 4pm. We parked our car at the foot of the hill and walked up towards the Kadalekalu Ganesha idol which is the biggest Ganesha stone idol I had ever seen. We walked down towards the Virupaksha temple, which looks spectacular from the hilltop with its sky-high gopuram and a wide veranda. 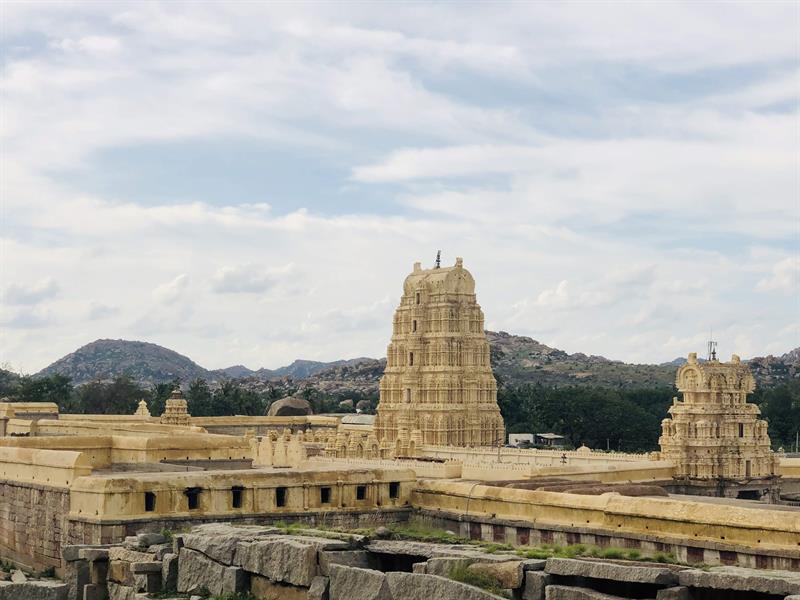 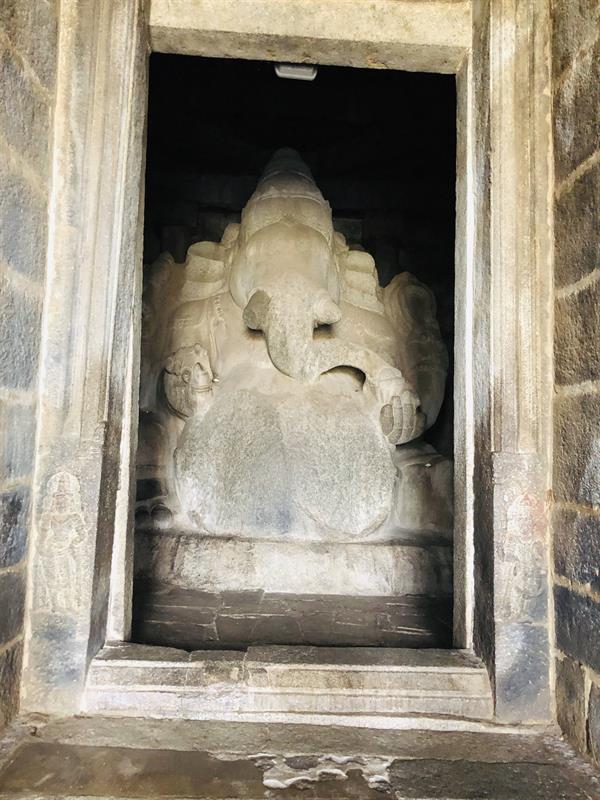 We prayed at the temple and hiked our way back to the hill to treat ourselves with the most beautiful view of Hampi at sunset on top of the Hemakuta hills (just 5 mins walk, not a trek). We sat there for a while and walked down towards the Sasivekalu Ganesh idol which is another architectural marvel. As we drove away towards Hospet, we found the Krishna temple(which was under some repair and construction) and the Ugra Narasimha Statue and the Badavalinga. Ugra Narasimha and the Badavalinga are adjacent to each other. 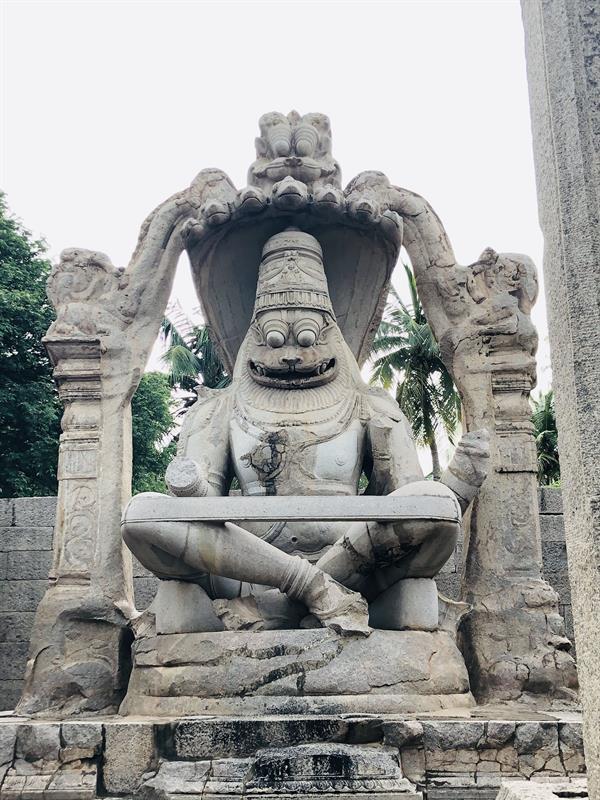 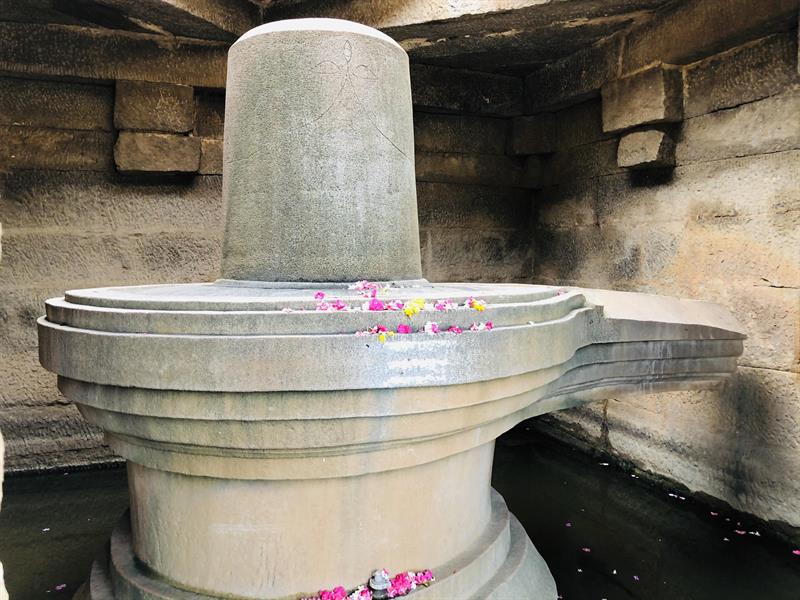 Badavalinga is a huge Shivalinga which is being taken care of by an 80-year-old priest, the only priest of the Badavalinga. It was 6 pm and we decided to end our trip and checked in to Hotel Hampi International at Hospet. The Hotel is at a prime location and the food here is delicious

Plan: Hospet-Badami-Pattadakal-Aihole-Hospet
Saturday morning after a good night's sleep and complimentary breakfast at the hotel, we left to Badami at 8am. You would find 2 Tolls on the way and make sure to take 2-way tolls as you would return the same way. The road was good for a few hours which was the National highway and later we found ourselves amid underdeveloped villages. You would find cornfields and sunflower fields on the way and the road at the village limits are very bad. We took the State highway and reached the Badami cave temples at 10.45am. 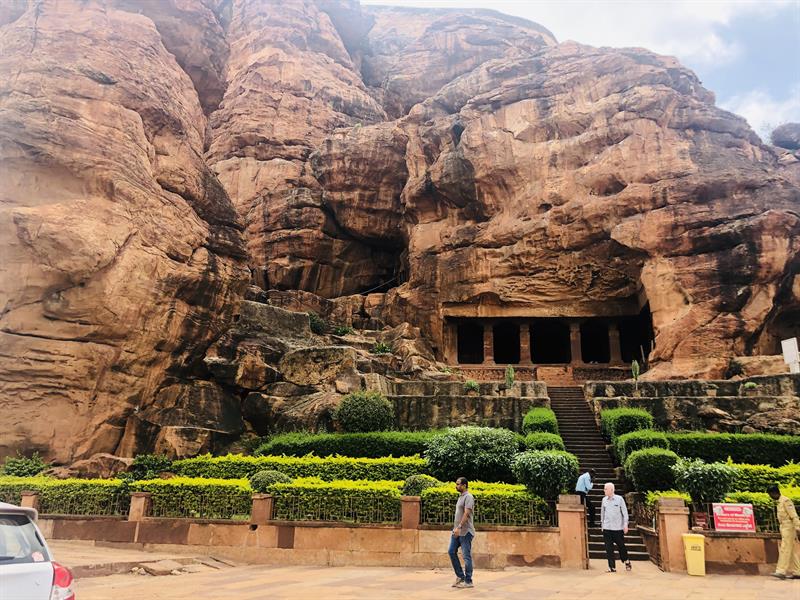 These caves are considered an example of the Indian rock-cut temples which dates back to the 5th and 6th century built by the Chalukya kings. There are 4 temples here,3 Hindu and one Jain temple which overlooks the Agastya lake and many other temples on the banks of this lake. Cave 1 is dedicated to Lord Shiva and the dancing Shiva or the Tandava Shiva is the prominent sculpture here. Cave 2 and 3 are related to Vishnu and there are large sculptures of the Trivikrama and the Varaha Avatar and other Vishnu-related mythology. Cave 4 is dedicated to the Bahubali and other revered figures of Jainism. 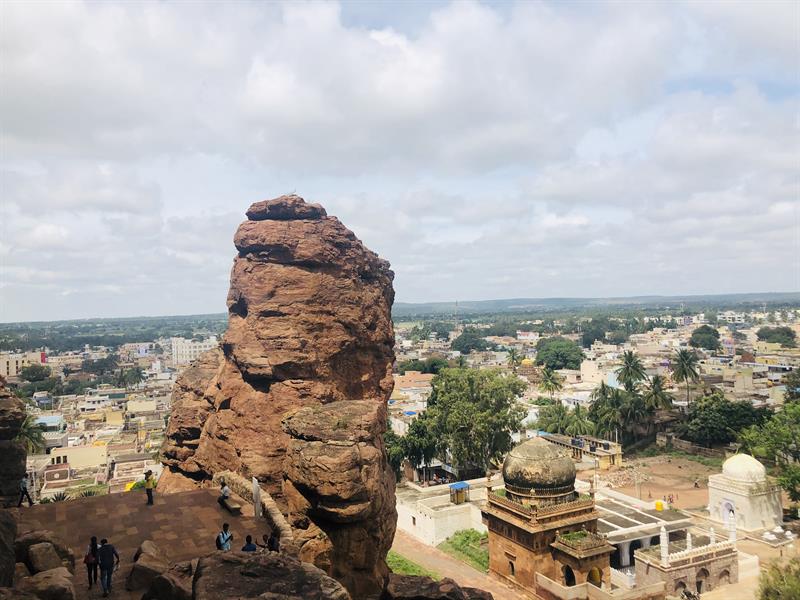 After resting for a while at Badami Cave temple, we left to the Badami Banashankari temple. Reached the temple by 11.50am and we took the special darshan and took the blessings of the beautiful Goddess Banashankari. We now drove to Pattadakal, which is almost 20km away. The road was too bad due to the recent rains and we finally reached Pattadakal group of temples at 1pm.All the 10 temples (9 Hindu and one Jain temple) are at one place. Pattadakal temples are built by the Chalukya Kings in the 7th and 8th century and this temple is a blend of architectural forms of Northern and Southern India. 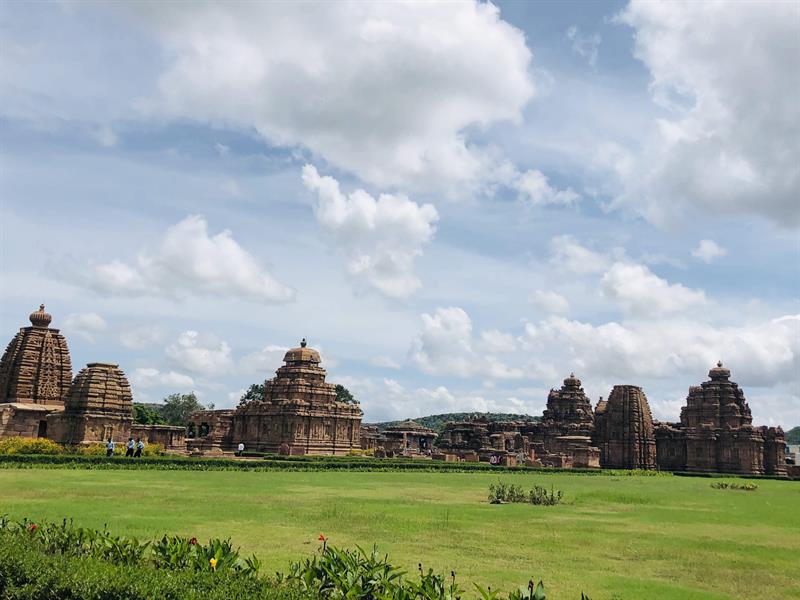 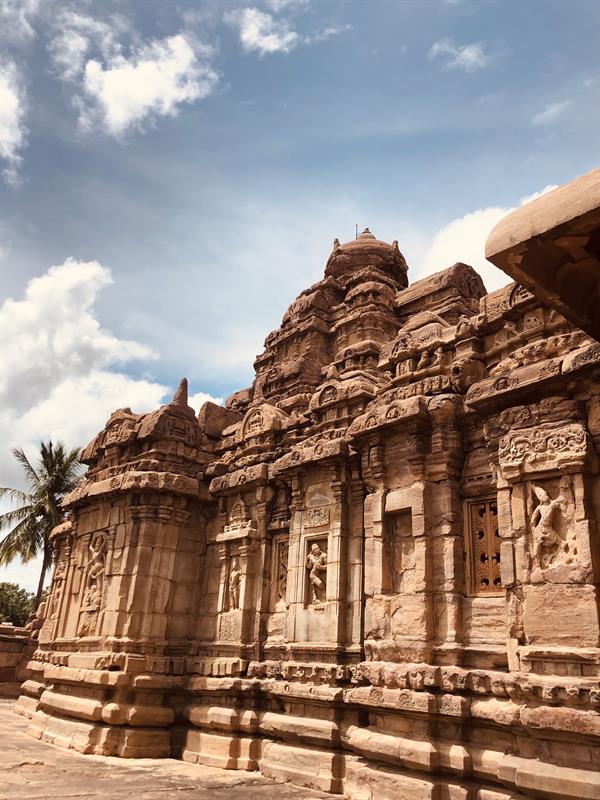 Most of these temples are dedicated to Lord Shiva. It is a vast stretch of architectural wonder and is also a UNESCO world Heritage site. We covered all the temples here and headed out to find the authentic North Karnataka style Roti Oota hotel right outside the gates of Pattadakal, which is a special meal consisting of Corn Roti. After lunch, we drove towards the last temple of the magnificent Trio- Aihole.

Aihole temples are just 10km away from Pattadakal. The road is narrow and goes through the village limits. We reached Aihole temple at 2.30pm. We found many monuments on the way too and the famous ones are the Durga Temple and the Vaishnavite temples which were later converted to Shaivite temples. Aihole history dates back to the 6th century with the rise of Early Chalukya Dynasty. Aihole was used for experimentation of various temple architecture, stonework and construction techniques. 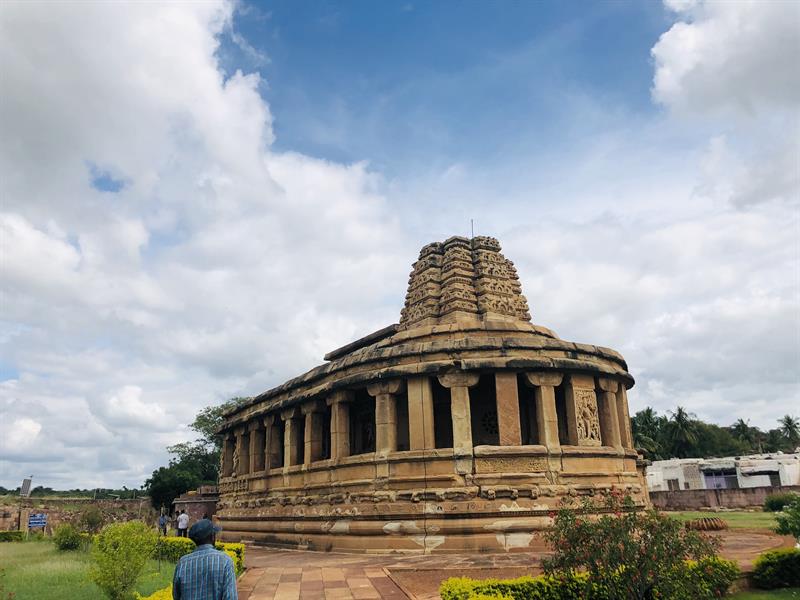 The main temple in Aihole is the Durga Temple, the name is misleading as the temple is not named after Goddess Durga. Also, there is a huge Nandi and Shiva temple opposite to it. There are various other places nearby like the Mallikarjuna complex, the Lad Khan temple and the Jain temple. We were really tired by now and left back to Hospet by 3.15pm. We drove for another 3 hours and we wanted to cover the Tungabhadra Dam, so we stopped there on the way back, walked up the road, but were disappointed as they do not allow the public to go near the Dam for security reasons. We could see the Dam while going to Badami from Hospet, that is the best view you could get. We returned to our hotel at 6.30pm. We had dinner at the hotel and rested for the day. 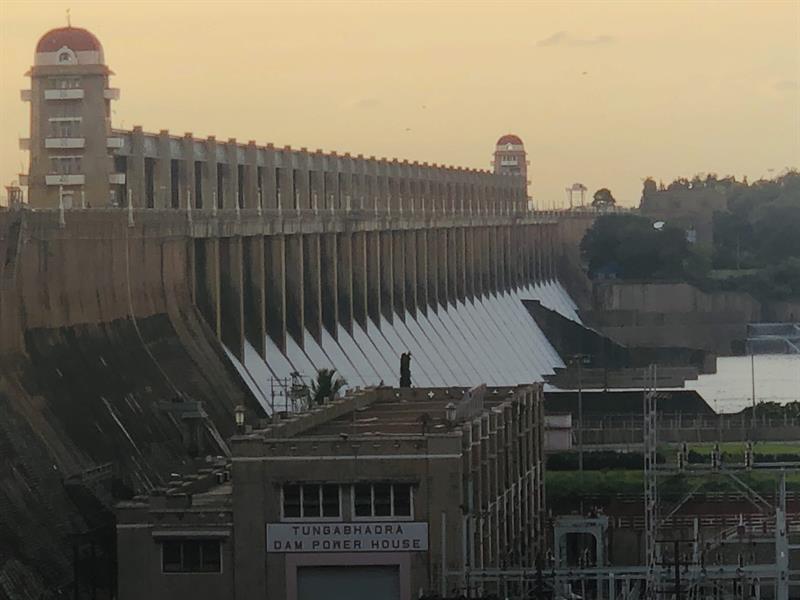 
Left from Hospet at 8am after breakfast at the Hotel and reached back to Bangalore at 2pm.We wanted to rest for the day as we had to resume office from the next day. You can also cover the Chitradurga fort on your return journey.

You have beautifully wrote the article with all the necessary information compiled at one place. I also visited Hampi and its nearby spots last year. Stone Chariot as shown in this image seems to be quite vacant. When we visited, it was filled with tourists. I guess you visited here in off season.