Pondicherry or Pondy or 'Puducherry' or 'Pudughai' since 2006 has a glorious past left by the colonial French powers. It is the capital city of the union territory which also goes by the same name. The area was under the French Government from 1674 to 1954 and they built some of the finest colonial-era structures that stand tall as an epitome of French culture and history even today. But if you are travelling to Pondicherry for the first time, you might be at crossroads thinking whether it is French or Indian culture in some parts of Pondicherry, separated by about 150km from Chennai, the capital city of TamilNadu.

Nestled along the Coromandel Coast of the Bay of Bengal, Pondicherry is a traveller's delight if escaping from the hustle and bustle of Chennai is the thing to do. Also, if you're looking for diverse experience all at one destination, you wouldn't get better than what Puducherry can offer.

From the warmth of the mesmerizing beaches in Pondy to the several meditation centres, ashrams and European architecture from a long-gone era and integration of several cultures and traditions, this place has a lot more to offer than you can imagine.

Take a drive into Pondy and you expose yourself to two-long-standing cultures here: one, the gothic-style colonial townhouses and bakeries selling Mediterranean-style dishes such as wine and steak. Here you would be welcomed by people who speak English or English with a mix of French accents. One part of Pondy is typically Indian and is somewhat Tamilnadu-like as people speak mainly Tamil here.

While there isn't any best time to visit Pondy, it is better to hit the place between the months of October and February when the weather is usually calm and clement.

You can take a car or a train from the nearby metro cities including Bengaluru and Chennai. Usually, a lot of people from Chennai and Bengaluru come down to Pondicherry to escape from the city life during weekends.

There are quite a lot of things to do in Pondicherry; however, the best stuff involves your going around the place and getting used to the intriguing way of life around here. Tourists and visitors alike usually end up doing yoga, engaging in spiritual retreat and eating tasty French food. Here are some of the places and activities that you can add to your bucket list once you are in Pondy:

Pondicherry Beach or the Promenade:

Once the main touring attraction of Pondy, today the beach is simply a shadow of itself but nonetheless attracts locals, visitors and tourists alike in large numbers particularly after sunset. As it is usually crowded, no vehicles are allowed on this road from 6-8 pm, also due to the narrowness of the road. It makes the perfect place simply spend time with your kith and kin in the evenings, whilst enjoying the cool breeze of the sea and viewing the Gandhiji statue and the statue built in honour of Dupleix, Pondicherry's Governor-General from 1742 to 1754. In 1870, a statue was raised to honour the great French Governor-General and stands tall to this day serving as a major tourist attraction.

The fourth oldest church in Pondicherry, Our Lady of Angels Church, was constructed in 1855. If you get a chance to attend the Sunday mass here, you can listen to it in three languages–English, Tamil and French. The church is a living example of the splendid Greco-Roman architecture. Often described as the most beautiful churches in Pondy, the church is located nearby the Promenade beach. One of the most frequent tourist attractions in the town, it holds a lot of religious and architectural significance. A must visit even if you aren't a regular churchgoer.

Pondicherry has a composite culture of sorts and the Varadaraja Perumal Temple stands as testimony to it. This popular Vaishnavite temple is located in the heart of the city and its main deity is Lord Vishnu and his cohort Goddess Lakshmi. This temple is about 800 years old according to known historical records. One of the finest examples of Chola architecture, it is revered by the Hindus and frequently visited by tourists from all over. 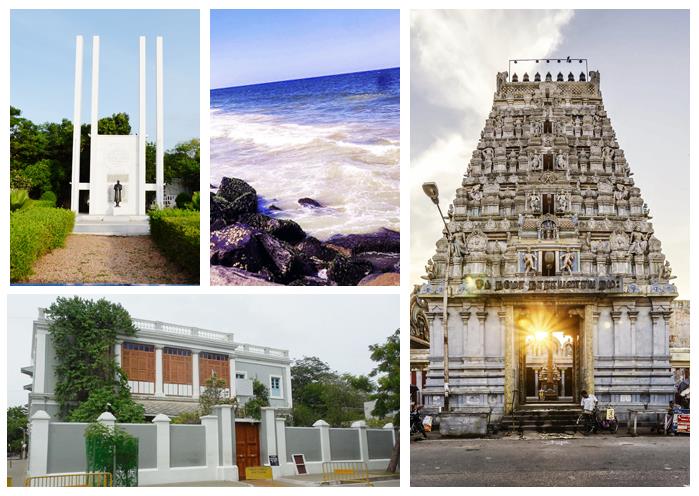 The French War Memorial is a befitting tribute to the French soldiers who laid down their lives in the First World War. A 20th-century construction, it was built in 1971 to pay homage to these valiant lives every year on Bastille Day, i.e., on the July 14. It is also a paragon of the strong ties that Pondicherry has with France. The war memorial is open to public view and features as a historically significant place.

The most popular place in Pondy in terms of the sheer number of visitors that it receives every day. Almost every visitor in Pondy would like to partake in the spiritual ecstasy of the Sri Aurobindo Ashram, one of India's most popular places for Yoga and meditation. Established in 1926 by the spiritual guru Sri Aurobindo and Mirra Alfassa, a French spiritualist, popularly called 'the mother', this ashram is a place for a spiritual retreat where you can let go off your mental pressure and focus on mind development or simply stay calm and meditate either individually or as a group. There are also rooms available for accommodation. If you just want to engage yourself in the various spiritual and meditational activities of the Ashram, you can visit the place between 4:30am and 11:00pm and pray quietly by submitting yourself to the divine force at the Samadhi. You can also learn meditation and breathing techniques from experts which you can easily practise anytime in life.

The ashram also displays an exhibition portraying the life of Sri Aurobindo, the ashram and its various activities. You can also watch videos showcasing the ashram's history and what went behind its existence and its working philosophy. There is also a guided tour arranged inside the ashram. If nothing else, you can do some serious soul-searching and recharge your body, mind and soul instantly with your partner.

If you're looking for one of the most reliable tour operators in South India for a trip to Pondicherry that'll be etched in memory, your search ends right here.