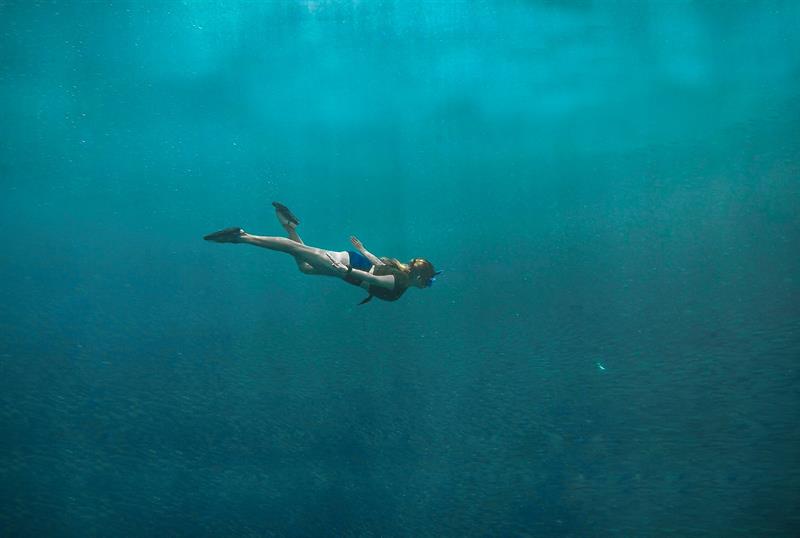 The periods arrive accompanied by physical discomforts, cramps and aches. The difficulties cannot be generalised and will vary from person to person. You may need to understand your physical condition before scuba diving. It is an adventurous sports activity intended for sheer pleasure. It should not turn troublesome for you.

The vaginal opening closes while on dive stopping the blood loss during menstruation. Therefore, the diver need not worry imagining that she will turn the water into a red pool. However, the blood and fluid loss from the body during periods can affect the physical strength of the diver. Scuba diving necessitates physical strength, even though it doesn't appear so. And the diver must have the energy and strength to sustain the dive and enjoy it.
You may consume enough juices or health drinks to prevent the body from dehydration. Healthy drinks will also add energy to the body.

As we know, everything starts and ends in the brain. If you think you are on periods and it will have a negative effect during scuba dive, it will have. You may avoid thinking too much about the periods and its effects on scuba diving. The more you think the more it will affect you negatively.

Some of you may have certain issues during menstruation, such as forgetting things where you kept them, dropping of objects as you are too preoccupied with thoughts, missing some articles required for the activity etc. You only need to be extra cautious to avoid such situations.

Menstruation should not pose a threat during scuba diving. It is another physical condition peculiar to women and it should not stop you from doing what you love. Just you have to know the implications and take the necessary care accordingly.

Will Shark Attack during Menstruation?

No. At least, the studies do not have any evidence that chances of a shark attack will increase during menstruation. It has been observed that sharks are not much fond of human blood. The chances of shark attack during periods are similar to the same during a normal condition.

In reality, sharks are more attracted to gastric juices of fishes and other oceanic creatures. Therefore, even if your blood leaks out (which does not happen once in water), it will not attract sharks.

The Point to Note

Menstruation should not hamper your joy in any manner. You can enjoy scuba diving without any worry during periods too. However, you may need to take precautions to prevent dehydration, decompression sickness, sprains and cramps. You may avoid scuba diving if your physical ailments as part of menstruation are more than what you can handle. It is also advisable to use menstrual cup during scuba diving. You may choose one that fits you correctly.