Vacationing in the jungle has always been the most thrilling experience for me. My first adventure in the jungle happened in the beautiful state of Madhya Pradesh. The thought of sighting a tiger walking past the vehicle has always triggered immense excitement and awe in me.

We took a flight on a cold winter morning of December and landed at the Mumbai airport. Having no other option but to break the journey, we were flown off on a bombardier and arrived at the Jabalpur airport. The next morning visited the famous Marble Rocks, a series of mammoth structures by the banks of the Narmada river, in Bedaghat of Jabalpur district, MP. The mighty river Narmada has carved a beautiful gorge out of the huge structures. Before heading to the jungles, one must pay a short visit to this natural wonder, often referred to as the Grand Canyon of India. 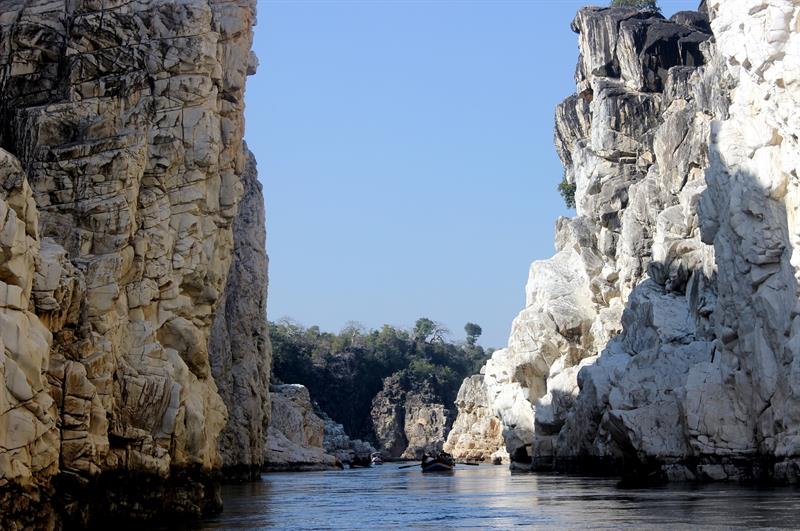 At a point the river narrows down into a cascading waterfall popularly known as the Dhuandhar Fall. The word 'Dhuandhar 'means a smoky gust of water and one can enjoy the sight of the heavy water gushing down and feel it spritz on all over the skin; it is a divine experience. 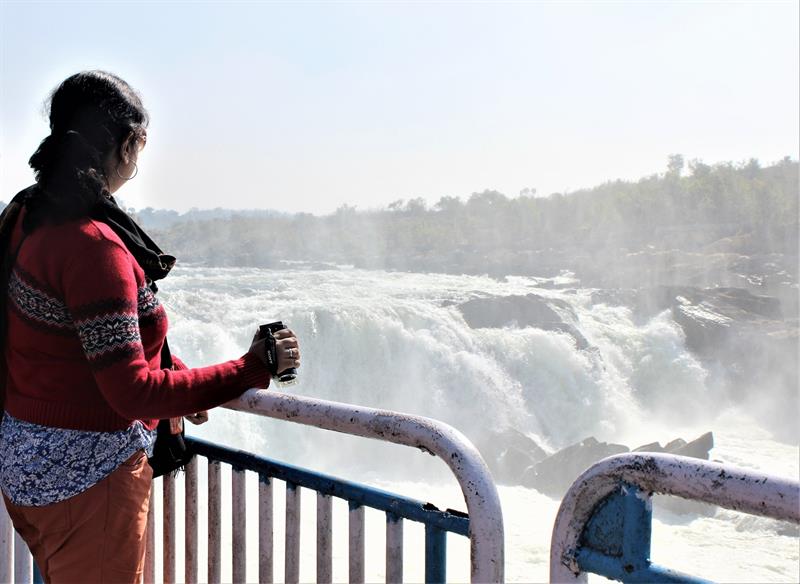 There are provisions for cable car services and pleasure boat rides as well; no wonder we opted for the latter. The boat ride was an outstanding experience, when on a boat one can actually get a good view of the tall rocks and experience their majestic beauty from close quarters. The currents are strong during the high tides and the boatmen have to paddle hard to keep afloat.

Some local boys were seen scrambling up the rocks and as our boat was passing by, they had jumped headfirst into the water and swam up to us, in the hope that we would reward them for performing such a 'spectacular feat' for us. I did give them some money but also cautioned them of the dangers lurking underneath the water. Getting off the boat we headed towards the car; on the way we could see an exhibition of artwork sculpted out of the local marble, flanking on both sides of the street. It was a treat for the eyes indeed! 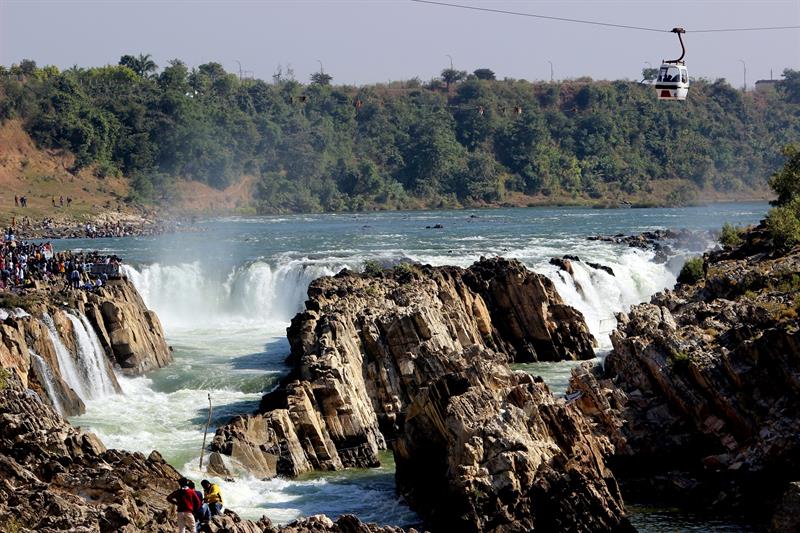 The next day we started very early for Bandhavgarh National Park, which boasts the highest density of tiger population in the country. Took a car drop to the Jabalpur station. Boarding a train, we reached Umaria. Another 35 kilometres drive ensued. This time the drive was absolutely mesmerising; we were actually venturing into the jungle. The greenery thickened, I spotted many peacocks frisking about. The lissome monkeys were jumping from one tree to the other, happily feasting on the Indian gooseberries, that were available in abundance everywhere. The driver informed that the monkeys are very fond of the fruit.

While I was enviously wondering about the vitamin C level of the primates, the driver again intimated us about the difference between the buffer zone and the core area of a jungle. However, we were driving in the buffer zone which is the outer area of the jungle. On reaching Bandhavgarh we checked in the resort by afternoon and had lunch on a machaan, while a langur kept gawking at us, sitting on a tall tree, from a distance. Darkness soon enveloped the region, although there were a few more resorts, hotels and souvenir shops in the vicinity, still the feel of staying in the jungle was evident. I could hear the crickets buzzing, it was a full moon night and the entire region was drenched in its magical light. 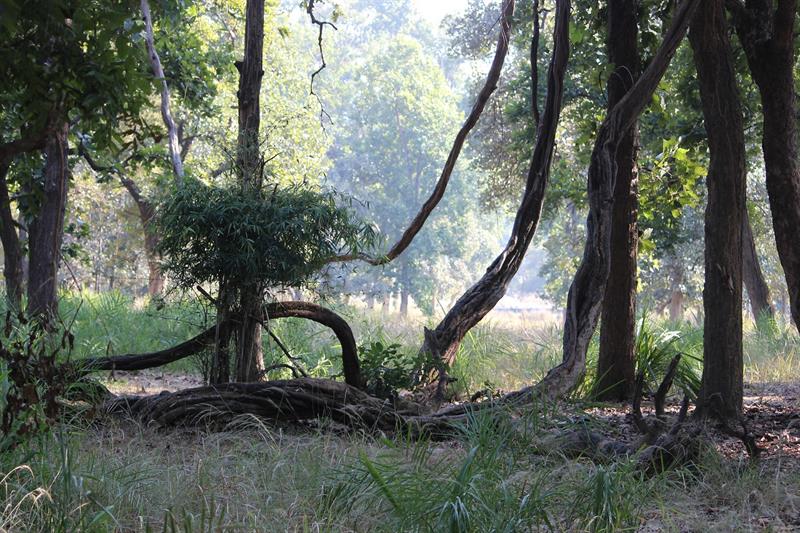 Next morning, I woke up to a verdant surrounding. The boy who had bought my morning tea said that a tigress was on a kill at the break of dawn; later it was driven away into the forest by the forest department officials. The fresh kill, a body of a spotted deer was left on the pitch road. Upon hearing the news, we were very excited and wanted to know more about it. My husband had gone one step further and rode pillion on a bike to reach the spot and have a look at the kill. It is generally believed that the tiger comes back to claim its hunt; so the adventure had been a risky undertaking on their part. However, I kept waiting at the resort with bated breath.

That day in the evening we had our first jungle safari. The safari jeep collected us from the resort and off we were taken into the core of the jungle. There are three zones in the Bandhavgarh National Park, namely Tala, Magdhi and Khitauli. Tala is considered to be the best as it leads to the premium area of the jungle; we were lucky enough to venture into the forest through this gate. 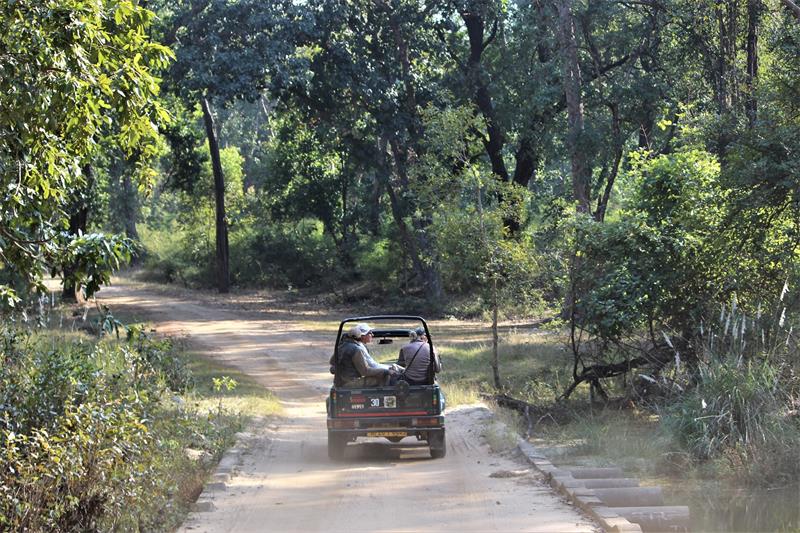 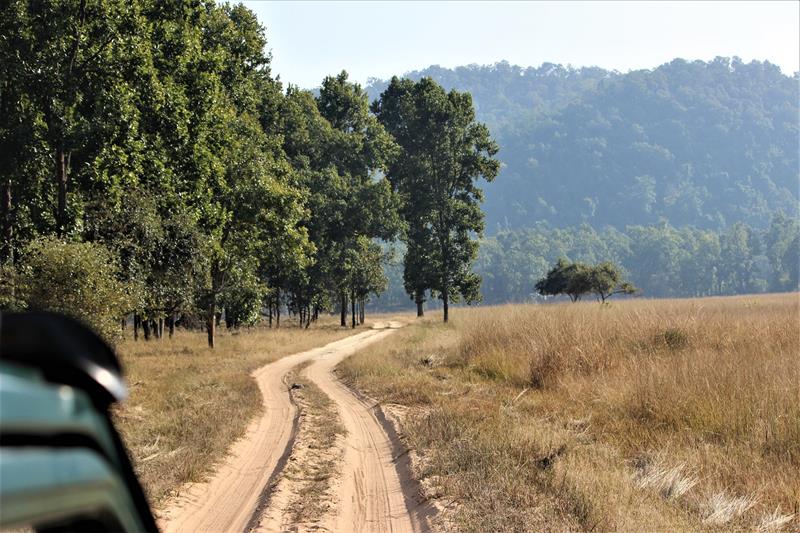 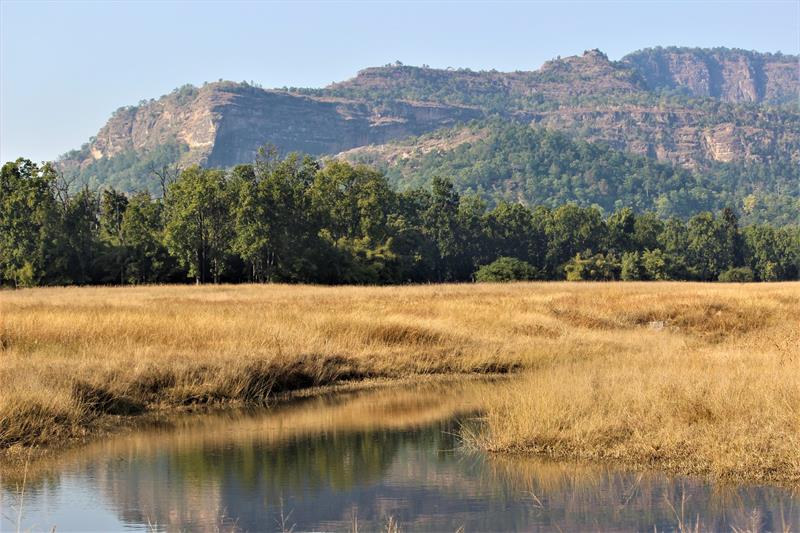 As the jeep proceeded the forest started getting denser, soon we were taken to a different world altogether. Herds of chital (spotted) deer, although busily munching on the tender grass, took a quick look at us every time our jeep passed by them; wondering if we pose a threat to them. The forest ranger, who was accompanying us, said that the deer and langurs have a great camaraderie. A langur sitting atop a tree alerts the deer when it spots a prowling tiger; their alarm calls also help the other animals to run to safety. 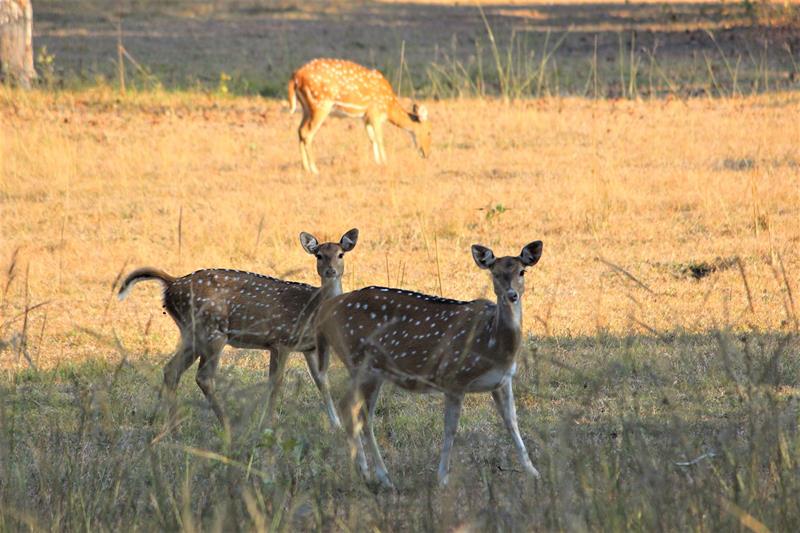 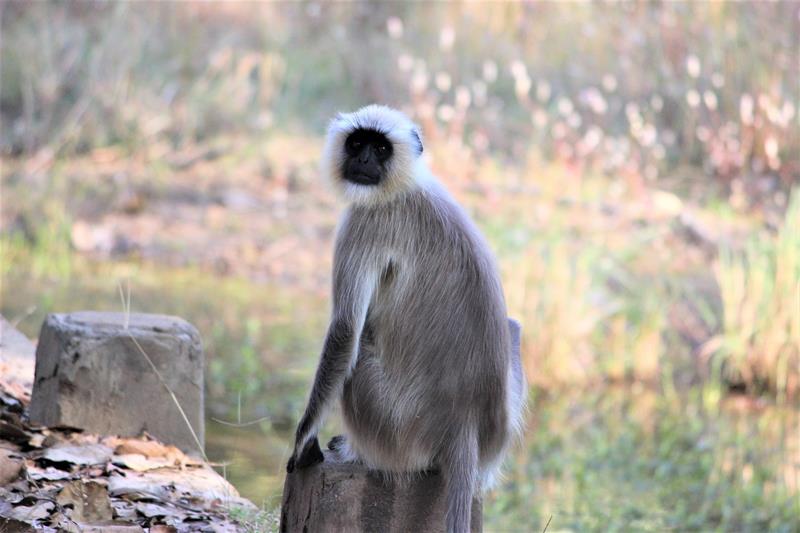 We drove past many other beautiful animals; saw a pack of jackal basking in the sun, spotted a barking deer and a sambar as well. The wild boar crossed our path frequently. The termite mountains dotting the forest was something very unique. 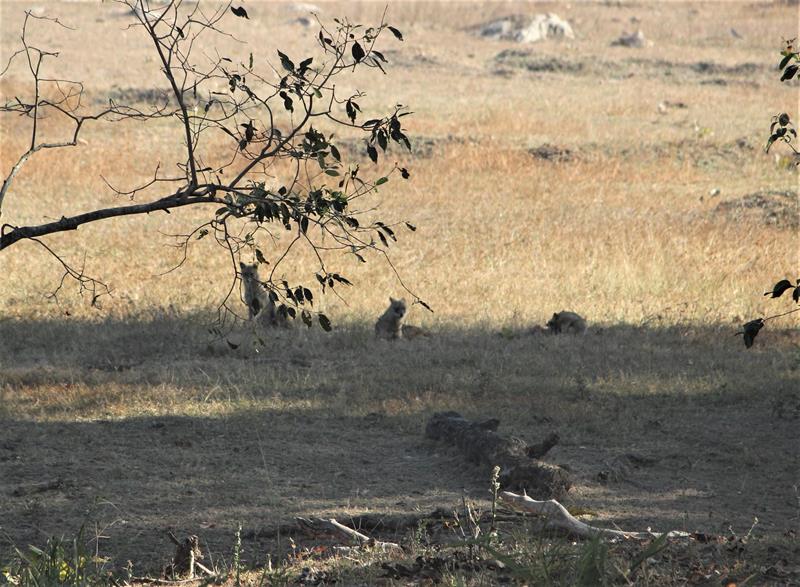 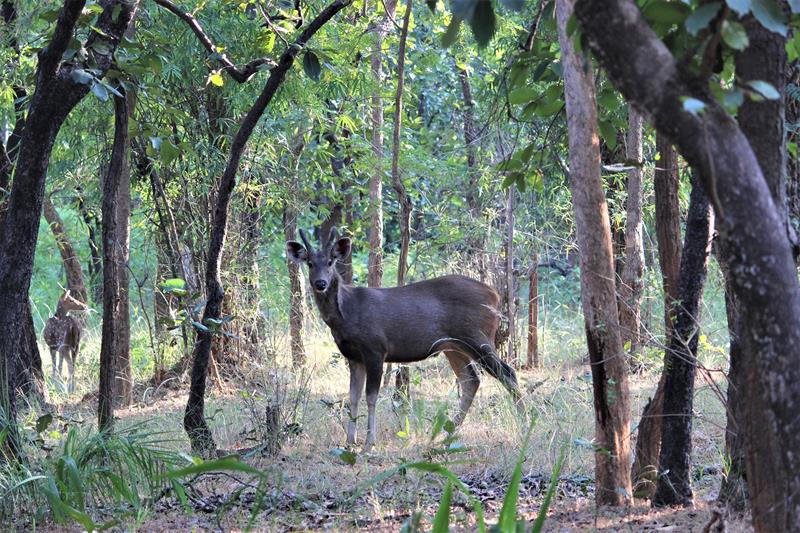 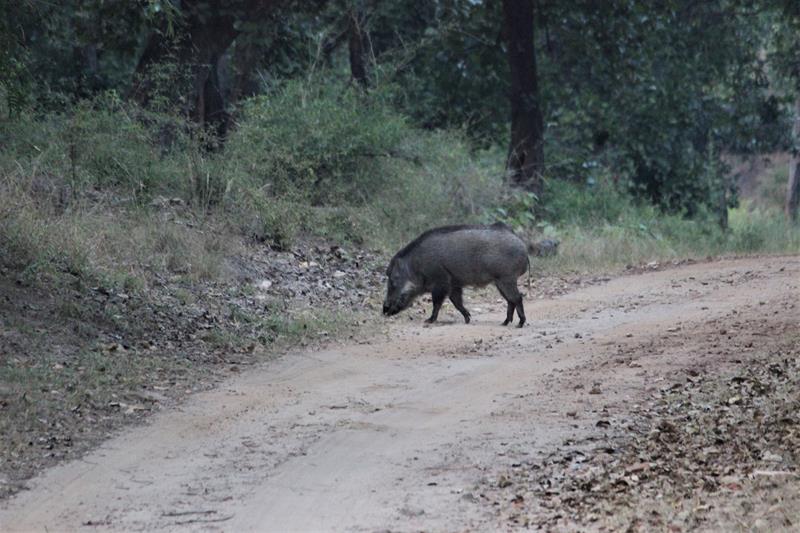 The forest ranger had a very sharp vision; he could easily spot birds, cleverly camouflaging behind the leaves and thickets. We took many pictures of rufous treepies, drongos, crested serpent eagles, Indian rollers, brahminy ducks, orioles, lesser adjutant stork, to name a few. 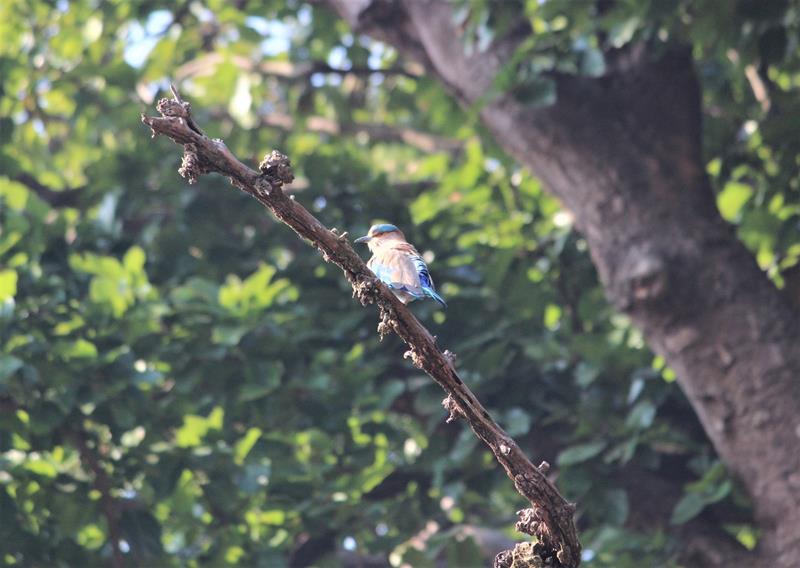 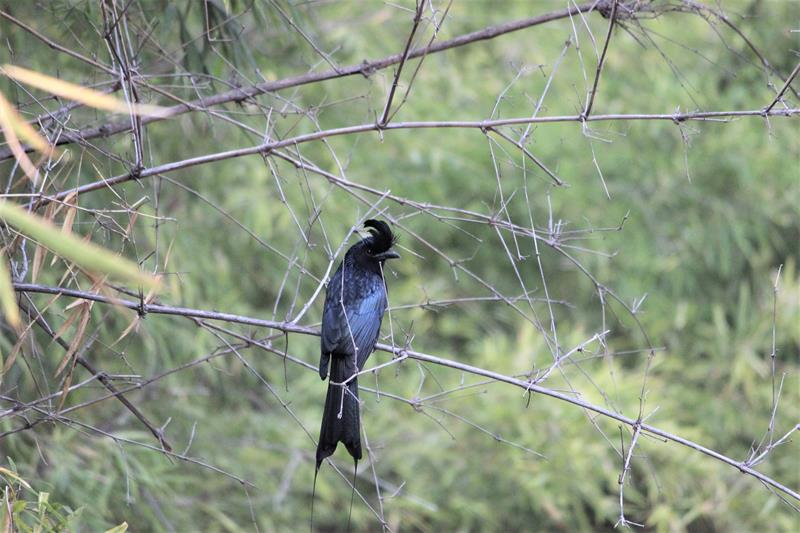 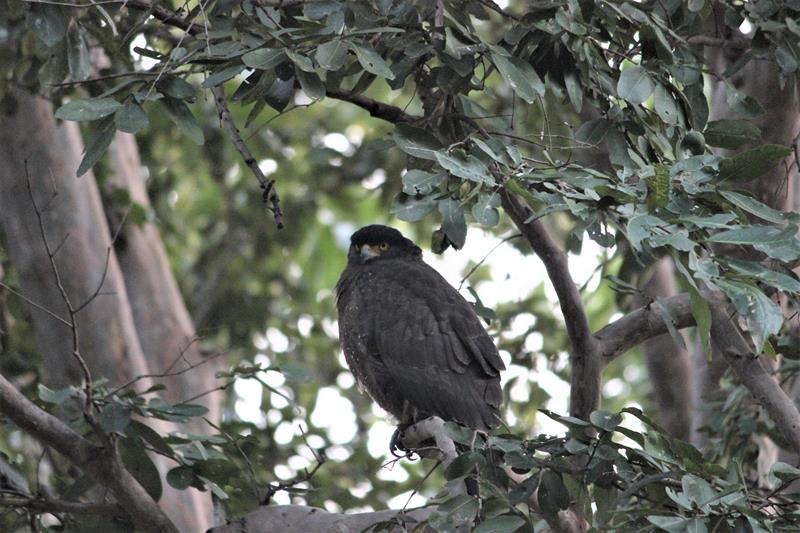 While capturing these wonderful moments in the camera, we did not realise that the sun was about to set. Suddenly an alarm call was heard; the monkeys, the peacocks and other animals started screeching out in unison as if signalling and alerting the other animals about an impending danger. The deafening sound rebounded throughout the forest. Startled as we were, the ranger informed us that a tiger was on a prowl. He gesticulated at us and we sat still in the jeep; the engine was also turned off. We were anxious but brimming with excitement, couldn't resist the temptation of watching a tiger so up, close and personal; but to our dismay, the tiger did not appear. After a while the alarm call also faded away. The tiger was a few yards away from us but the thick bush hid it from the view. Although we had not spotted it, I am sure it was watching us. 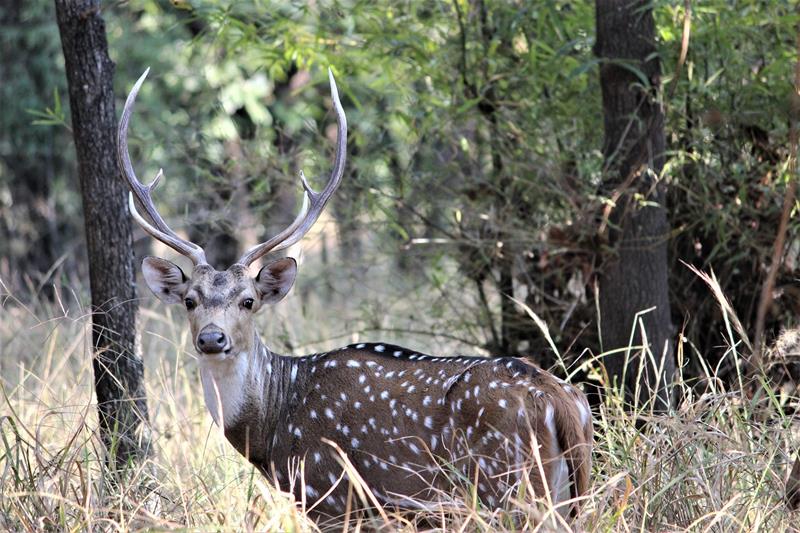 On the way back came upon other safari jeeps. Everyone had the same story to tell, the forest had not disappointed us. The next day we had a check out, ergo did the packing early. The next destinations being Kanha and Pench National Parks consecutively, we had miles to travel. I have been to many National parks in India thereafter but the animal sightings that I have had in Bandhavgarh surpass all.