Having done Chittorgarh Fort, started our onward journey to Udaipur. It took almost five hours to reach this beautiful city of Rajasthan. While planning the tour we had made sure to spent the Christmas day in this place. Udaipur happens to be one of the most romantic cities in the world and what can be more alluring than indulging ourselves in this vibrant city at this time of the year.

The city has been romanticised by poets time and again. No wonder, the beautiful lake Pichola is one of the main reasons for its glorification. The entrancing beauty of the lake captivates one and all. After checking in at a heritage palace resort, we meandered along the old alleys and reached the lake to spend some time by it. The silhouette tourist boats skittering across, with the sun setting behind in the crimson sky, was a wonderful sight to behold. The sound of the water sloshing on the banks and the sight of the twittering birds returning to their nests left a balmy effect on our minds. The stress of the long journey was quickly forgotten. 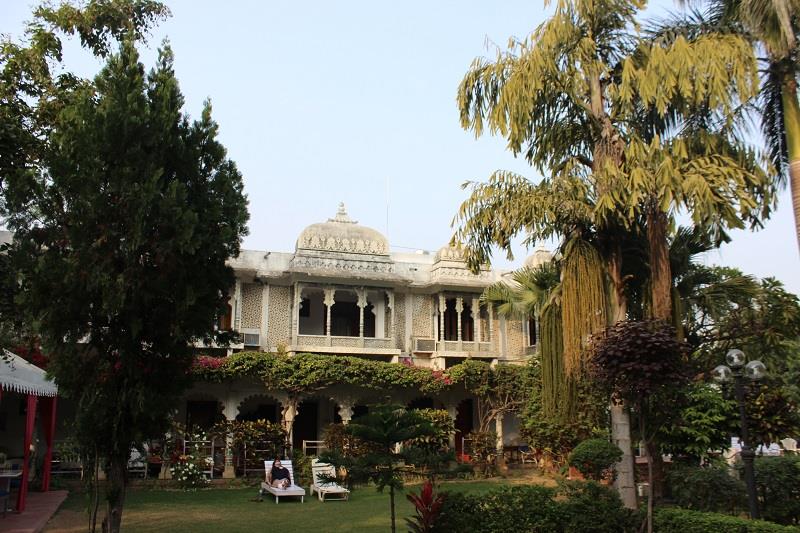 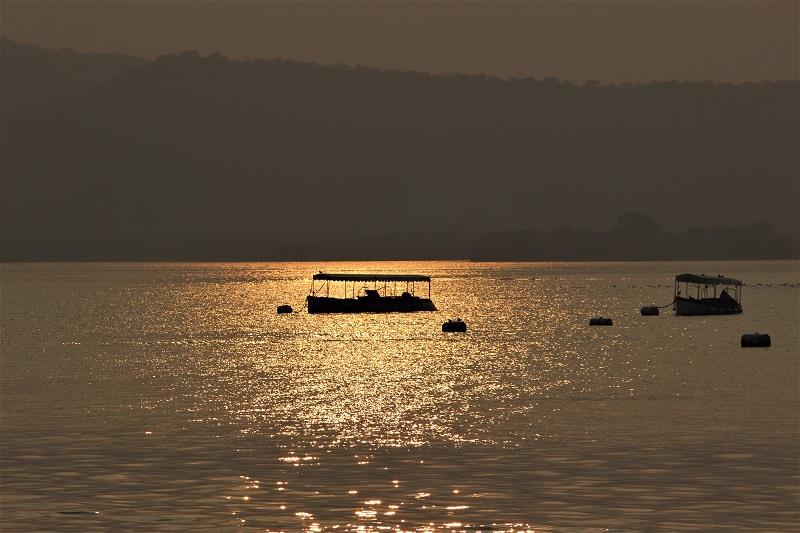 However, it was getting dark, so had a quick walk to the Fatah Sagar lake as well. It is one of the four lakes in Udaipur located to the north of lake Pichola. That night had the first glimpse of the City Palace. With the spot lights on, the palace sparkled in all its glory. The palace is aesthetically ornated and under the night sky it felt like a dream. 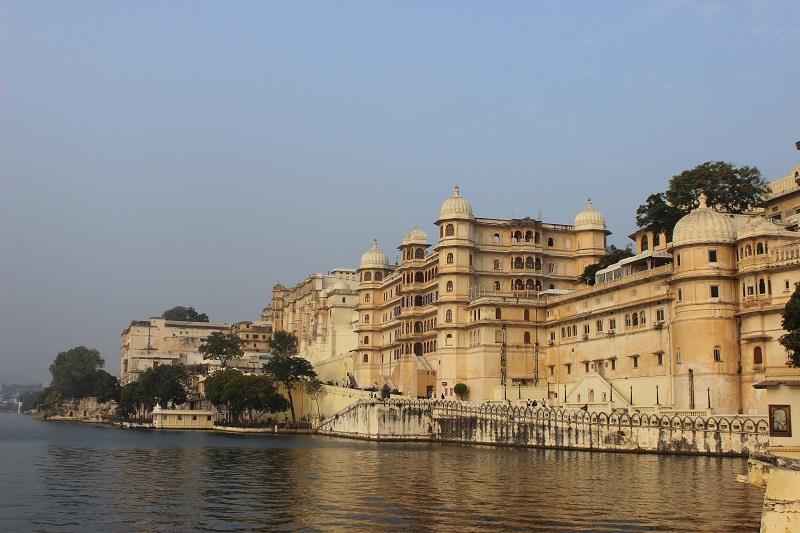 The Lake Palace is another architectural marvel that the city can boast of. It was initially constructed by a young prince, Maharana Jagat Singh, on lake Pichola, in the year 1743. The prince yearned to stay on an island with his mistresses, so to live out his dreams this masterpiece came into being. However, the palace has been eventually bought up by the Taj group of hotels and it caters to a category of high roller tourists who don't mind lashing out on accommodation but enjoy staying on the island overlooking the City Palace and the beautiful Aravalli ranges. At night the palace looks magical as it reflects in the pristine water of the lake. 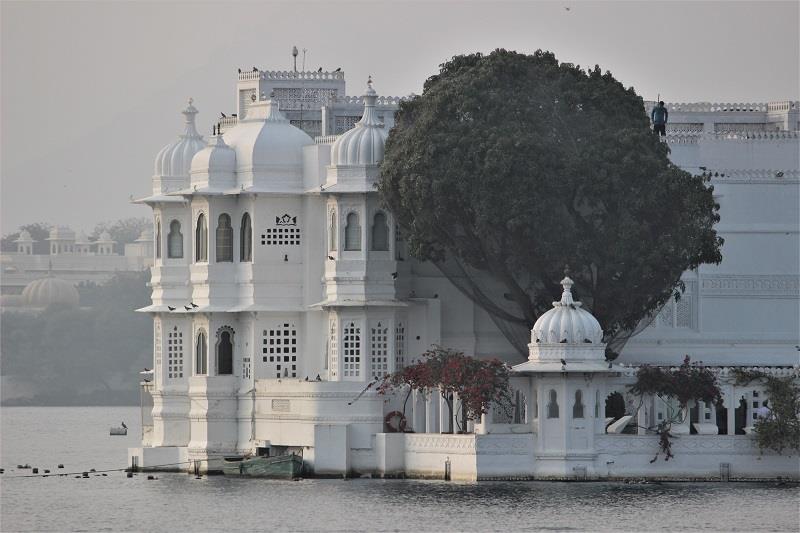 That night, on the eve of Christmas all the hotels and resorts were lit up and packed to capacity. Tourists thronged the night market. The vendors were busy wheedling out money from their customers. We also did some shopping; I got absolutely carried away as everything on display was so colourful and eye-catching. Returning to the resort we had had a sumptuous Rajasthani dinner and finally called it a day. 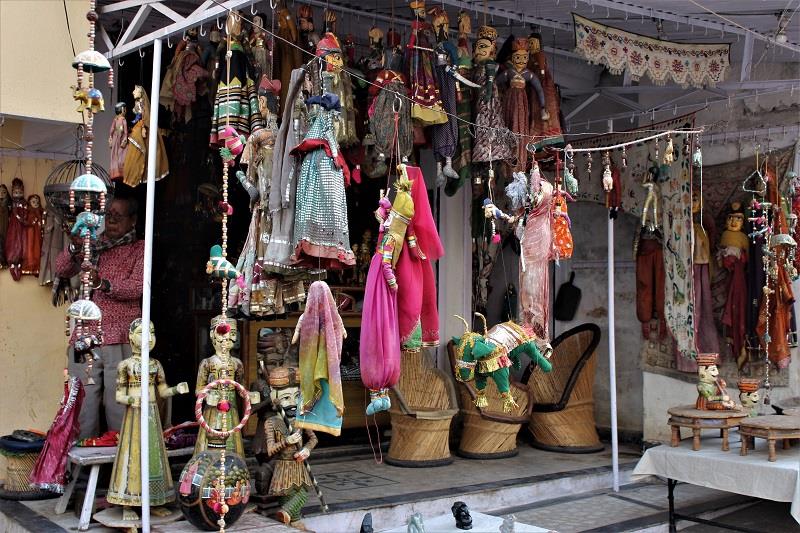 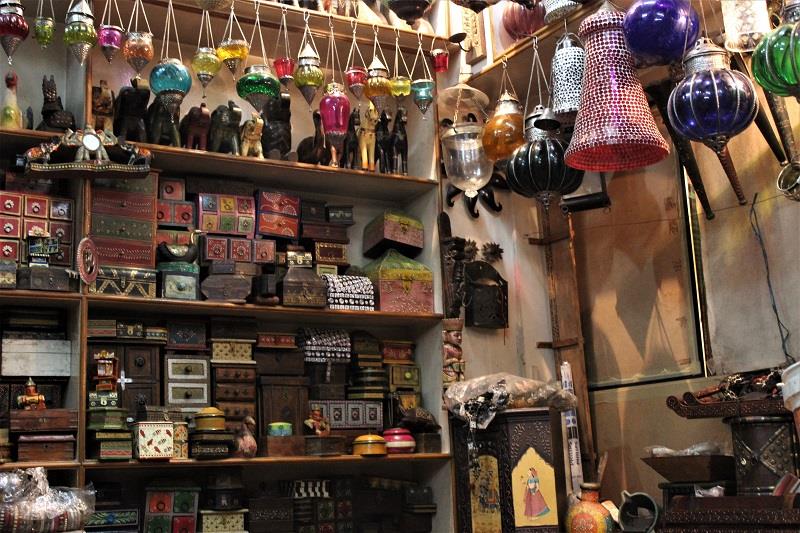 The next morning, after gorging on a gala breakfast started for the City Place, Udaipur. Exploring the palace in a day is a herculean task; so we sought the help of a trained guide who could brief us about the palace. 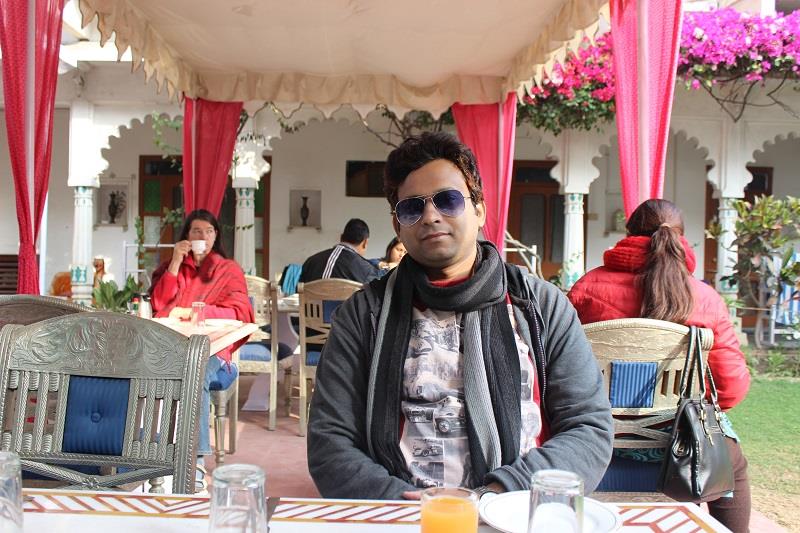 It has taken about 400 years to build this opulent structure. The construction was started by Maharana Udai Singh II of the Sisodia Rajput family, when he decided to shift his capital from Chittor. The palace is set on top of a hill and is considered to be the largest among the other palaces in Rajasthan. The aerial view overlooking the lake Pichola, the Jagmandir and the Aravalli ranges is mesmerising. 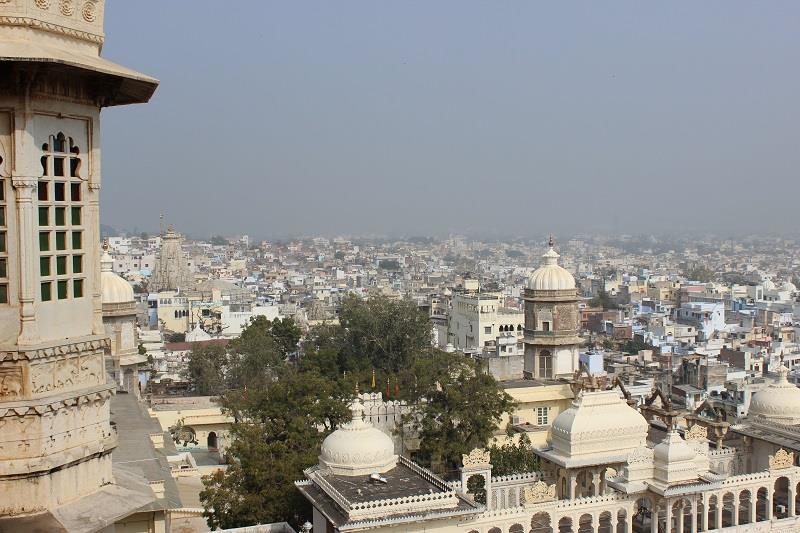 The guide, a nifty fellow, showed us around. With our historical curiosity piqued we were flooding him with question. Rajasthani and Mughal architectural designs showcase on the ritzy walls and ceilings. Every nook and corner bears testimony to the valour and courage of the bygone era. An interesting find out, the popular James Bond movie ''Octopussy'' was shot here. We also came by a kitchen, although in a state of desuetude, hoarding all the basic amenities needed to cook for the royalty back then. 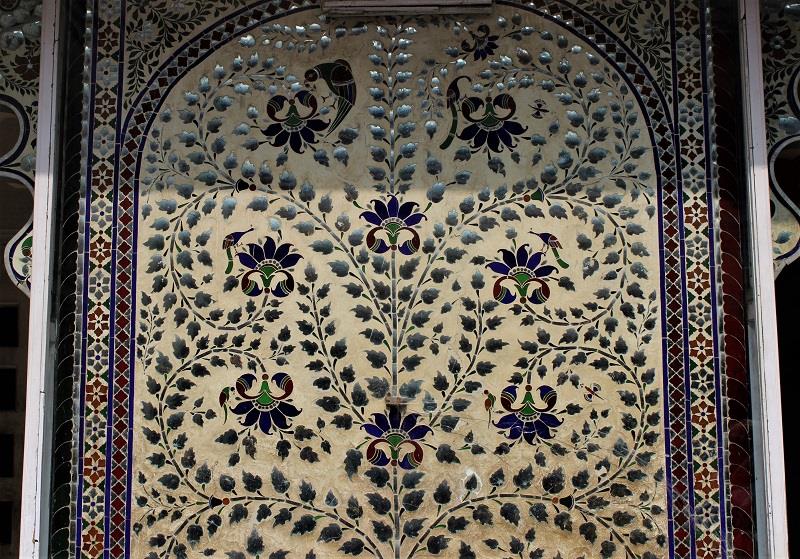 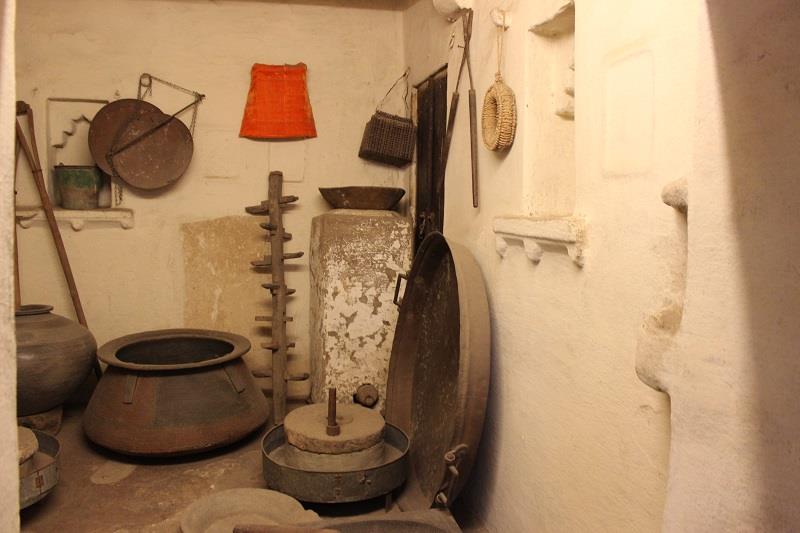 It took us almost four hours to make our way around the palace. We were tired and famished. After spending some time in the courtyard started back to the resort. As I was walking on the boulevard, I noticed a group of mounted police trotting along. They were followed by a cavalcade of vintage cars, most likely some festival was afoot. I was lucky enough to capture that spectacular moment on my camera. 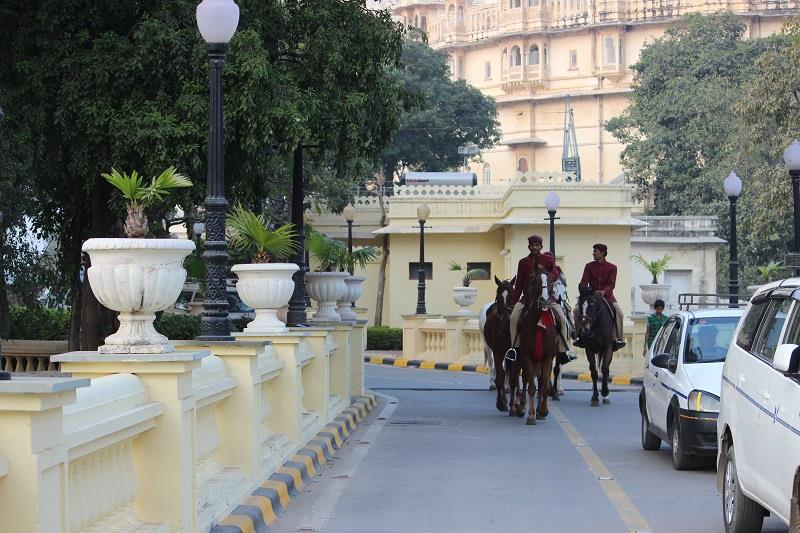 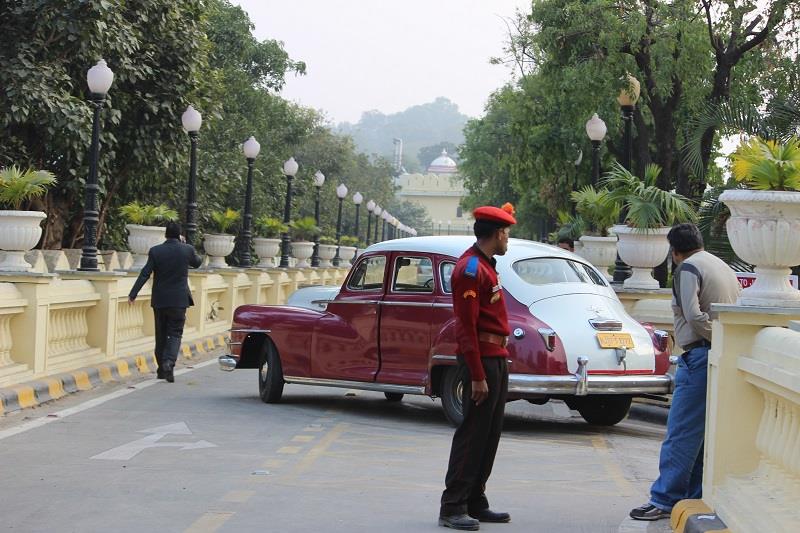 Later on that day, visited a very famous tourist spot, ''Sahelion ki bari''(garden of the maidens). The garden was built by Rana Sangram Singh; it houses many fountains, a lotus pool and marble elephants. The queen and her entourage were gifted this place by the Raja himself, so that they could enjoy some pleasurable time away from the insipid life in the palace. They used to spend time by rambling around the property and relaxing in the leisurely gardens. 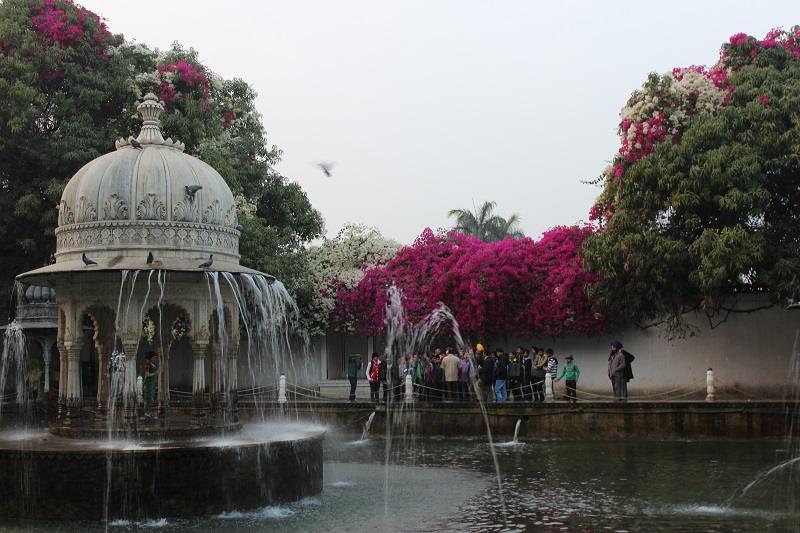 Dusk was closing in, while walking back to the resort we stopped by to soak in the festive spirit, and it was downright Christmassy. We went to a restaurant perched on a rooftop. As I was digging in, the City palace glistened behind me; suddenly the fireworks streaked into the sky forming a cascade of colours. I could see people revelling in the streets. The temperature dipped to eight degrees that night. We settled ourselves down by a group of rustic singers belting out some fine numbers to beguile the chilly night away. 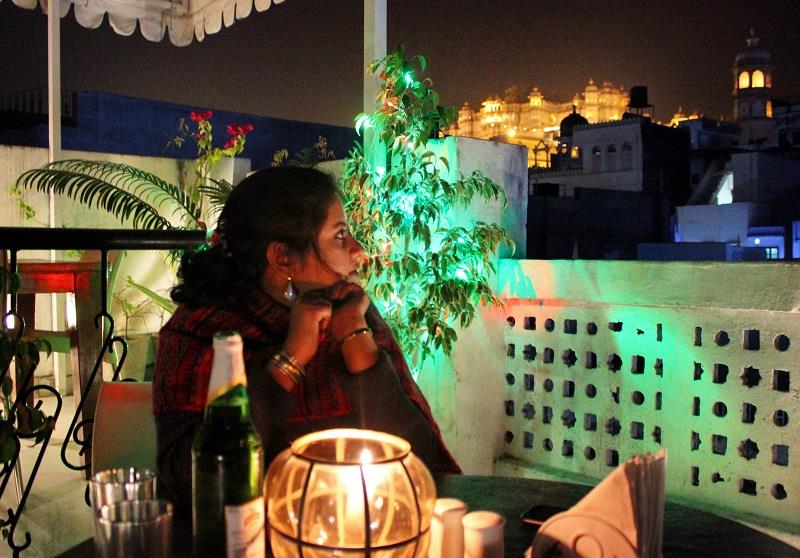 Next day started for Jodhpur in the wee hours of the morning. As our car drove past the palaces and lakes, I bade adieu to the beautiful city of Udaipur, but promised myself to come back again.