A very short introduction about myself - I am Sharath Bhat hailing from the Garden City Bengaluru. I am a Software engineer by profession and globetrotter by choice. I am an avid traveller - be it Solo, with Family or Friends. This is my first official blog and would be taking you through my experience of a recent Solo ride to Ramadevara Betta.

In these strange pandemic times, one of the few upsides is that tourist places are less crowded and hence travellers can enjoy the nature peacefully without many distractions. I have done quite a number of trips during this pandemic and all of them are day trips and I can say it is pretty safe to explore nearby places, provided you take necessary precautions like I do - wearing a mask at all times to cover the nose and mouth, maintaining Social distancing, frequent hand sanitizing and carrying own food. I also travel by own vehicle to avoid contact with the public.

November 15th 2020 - The Day of this trip happened to coincide with the auspicious day of Deepavali(Lakshmi Puja day). It was a spontaneous plan and I wonder why this was my first trip to Ramanagara in all these years, even though it is one of the most popular and nearby travel destinations from Bengaluru.

I had packed everything that I needed - some snacks to savour, water bottles to hydrate myself during the short trek, rain jacket and a poncho to cover my bag in case of rain, cap and a pair of sunglasses in case of hot weather and hand sanitizer of course. 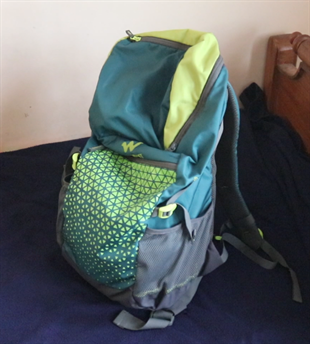 All set for the ride

Ramanagara is situated 50 Km from Bengaluru en route to Mysuru on State Highway SH17 and it takes around an hour and 15 minutes to reach considering the traffic. I started my journey at 12:00 PM and since it was a cloudy day, the ride was pleasant with cool and fresh breeze throughout. I reached Ramanagara town around 1:15 PM after taking a short break at a random place near Bidadi. Deviation from SH17 to Ramadevara Betta can be identified by the big Hanuman statue on the right side, which is hard to miss. 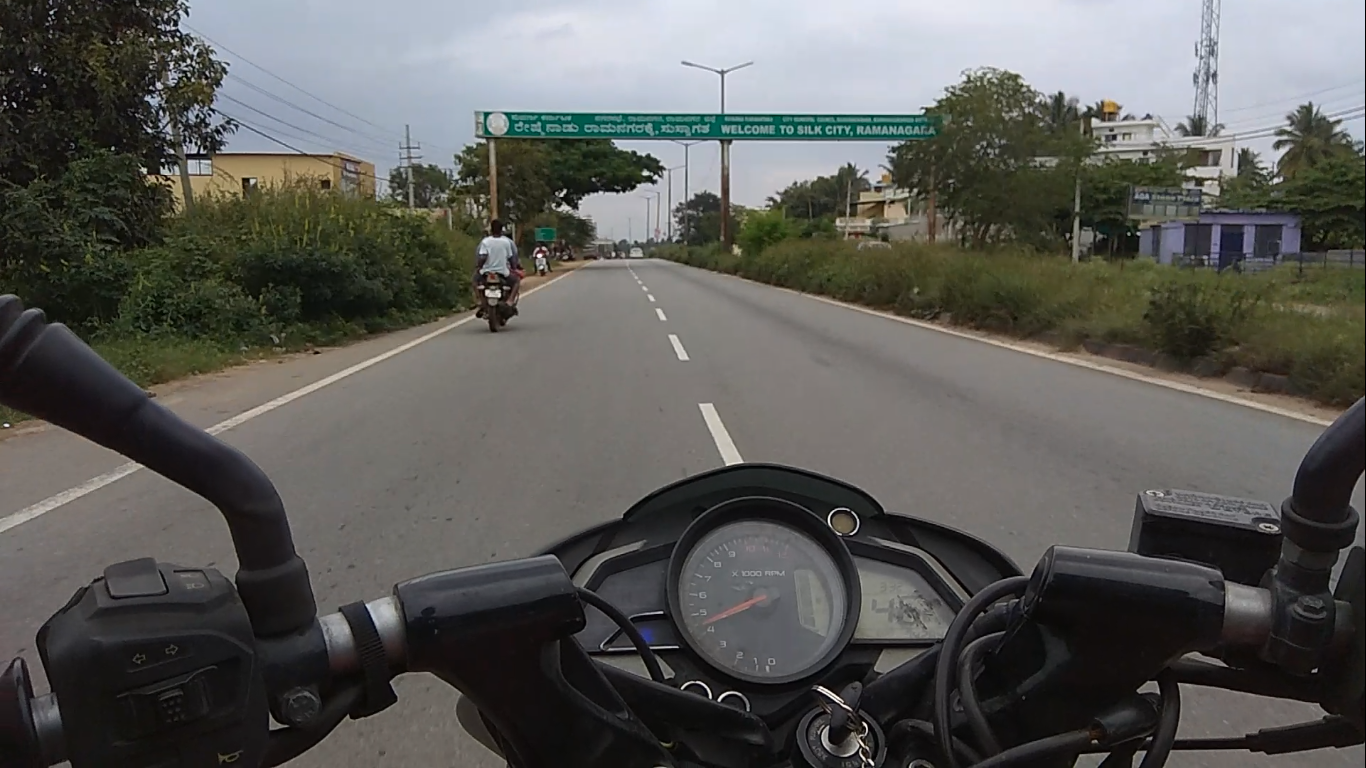 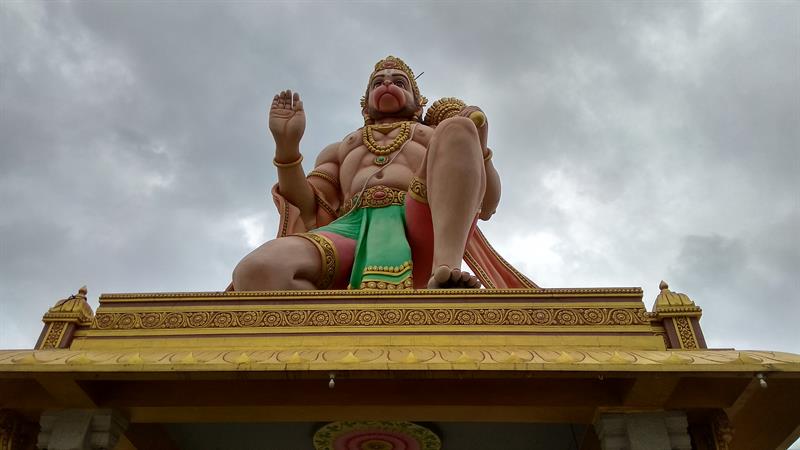 The entrance to the hill was 3 Km away and as I drove further, noticed some big boulders which were on the left side of narrow roads of rural area. The last stretch of the journey falls under a protected forest area by Government of Karnataka for the preservation of Vultures and is called Ramanagara Vulture Sanctuary. This is the only Vulture Sanctuary in India and is famous for birdwatching. I paid the entry fees to proceed further on my journey which was 25 INR per person and an additional 10 INR for the bike. I got a good feel as I entered the forest region and this short stretch of no more than a kilometre included one hairpin bend and path covered with trees leaving very little room for sunrays to enter. As I reached the place, I could see vehicle parking space amidst the trees and in a distance was an arch that marks the foothills, where the stairways leading to Ramadevara Temple starts. 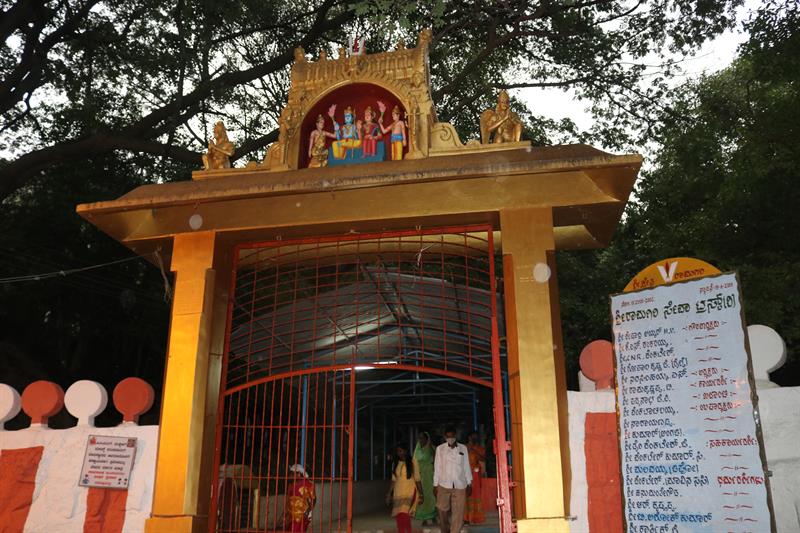 I parked my bike and after drinking some water, started to climb the first of 351 beautiful painted steps, leading to the Rama Temple atop the Hill. On the way were small shrines dedicated to Deities Ganesha, Shiva and Hanuman. The climb can be categorized as moderate, neither too steep nor gentle. With some good exercise to my legs, I accomplished it in 20-25 minutes and I could now see the premises of the Temple. 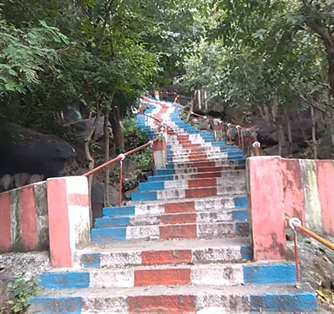 Leading steps to the Pattabirama Temple

The main Temple is dedicated to Sri Pattabhirama - Lord Rama sitting on Throne with Maa Sita on His lap, Lakshmana standing next to the Throne and Hanuman bowing at them. It was a happy coincidence that Pattabhisheka(Throning ceremony) of Lord Rama in Ayodhya is believed to have taken place during Diwali, returning after He defeated Ravana and completing 14 years of exile in the forest. Just next to Temple is a big boulder which adds to the beautiful view and there is a Kalyani(pond) right next to the Temple. Also can be seen from premises, is Rameshwara Swamy Temple which is dedicated to Lord Shiva. Legends have it that Rama stayed in this place briefly during the 14 years of exile and the pond is a result of Rama's arrow for water resources. The pond is known to be very deep and hence not accessible to the public. Another legend about the place says that the Idols present in Temple is installed by the King of monkeys Sugriva after the Throning ceremony of Lord Rama. Also visible is another huge boulder nearby with seven vertical rocks, which are believed to be the Saptharishis(7 Holy Sages). Temple darshan timings are from 9 AM to 5 PM and there is Annaprasadam available for devotees as lunch on weekends. 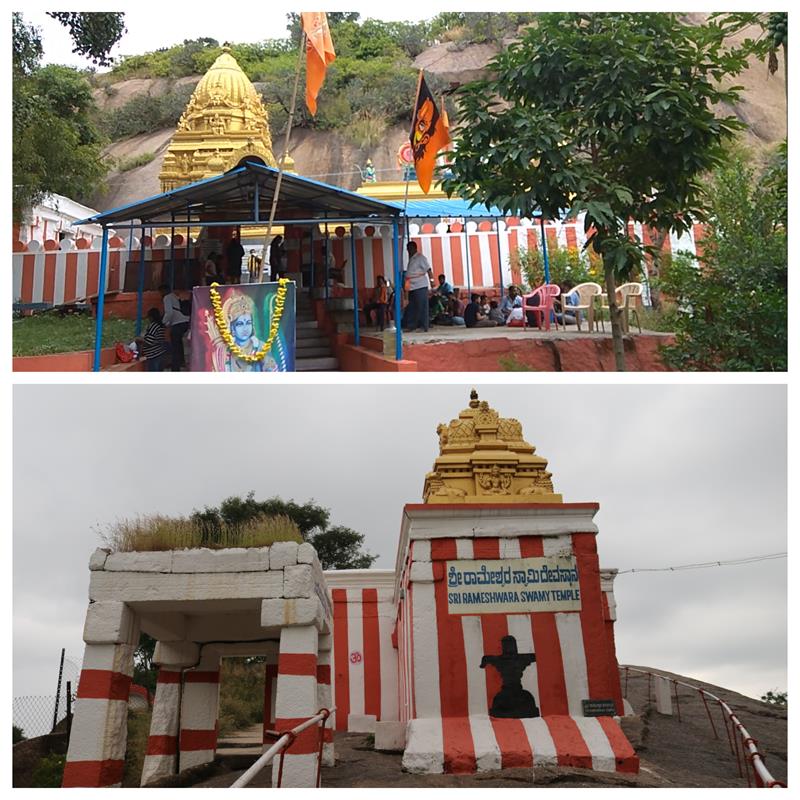 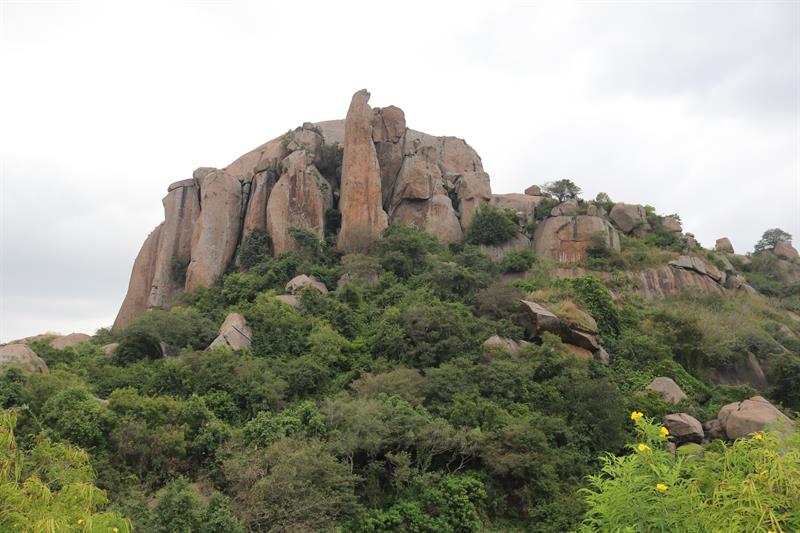 After a peaceful darshan, I headed on a 10 minutes walk along the rocky path which leads to the 700-year-old Anjaneya Idol. The pathway was very picturesque and provided an experience of a good forest trek. 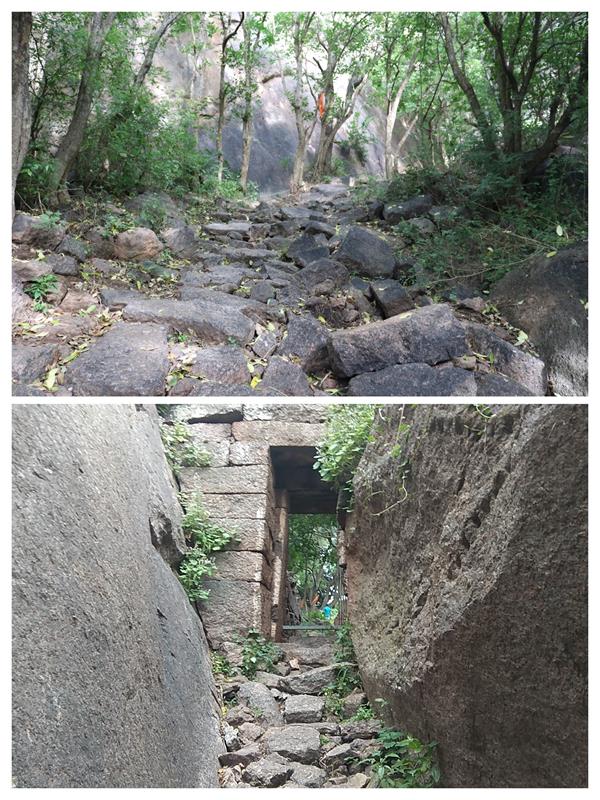 After taking some nice clicks, walked back to the Rama Temple premises and headed to the final place of the day's journey - the peak of Ramanagara Hill. It was a 10 minutes climb up the hill with some open spaces which offered some great views, after which I got a sense of what might be in store from the peak and was really excited. Shortly reached a place where there was a rock carving of Sugriva and next to that, could see the final stairway of 50 steps leading to the peak. These steps were carved on a single rock and the path was so steep, that one had to use railings to climb them and there was a considerable risk involved. After taking a good look, I started climbing and noticed that these steps were carved in such a way that it provides a good grip, which gave me the confidence to accomplish the climb. On a rainy day, it would have been a totally different scenario as the rock could get slippery. Advice to others planning to attempt this in the future - Don't look down while climbing :) 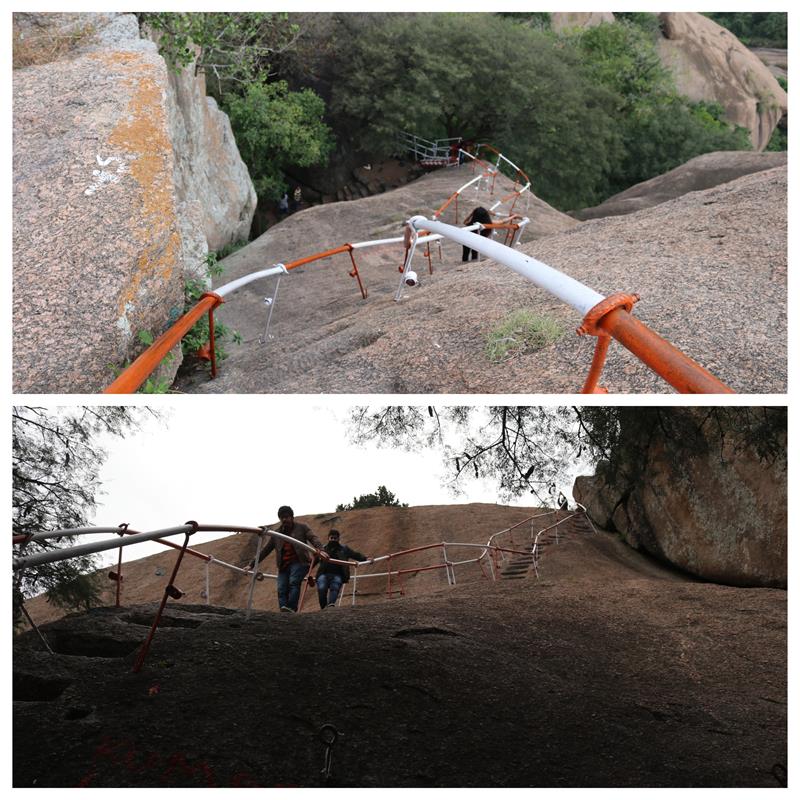 Finishing the job is always hard

As soon as I made it to the last step, I was warned not to go to the edges of the peak by a security guard, who was appointed by Temple authorities to ensure the safety of the public. As I proceeded further and entered the peak, the WOW feeling started to kick in as I was now exposed to the amazing panoramic views from the peak. Unlike some viewpoints which are confined to a small gathering, the peak of Ramadevara Betta is wider in space and would take easily 10 minutes to explore completely. Since it is one of the tallest peaks around, it offers a 360-degree view of many nearby hills (including Savandurga and Narayanagari), water bodies (streams of Manchinbele Dam and Kanva reservoir) and some villages around. Could also spot distant views of Wonderla and Kengeri. Not to forget the view of hills where the infamous Sholay movie scenes were shot. I explored the peak slowly which took more than half an hour and chose the best spot to relax. It feels heavenly to savour some snacks and quench your thirst after all the hard work, and as I finished doing that, it started to drizzle. I got a feeling that it could rain heavily and briefly thought about possible slippery stairs while descending, but did not bother much and stayed on. Drizzle subsided eventually and clouds started moving away in a while. I spent an hour in Nature's arms enjoying the beauty, which was blissful. 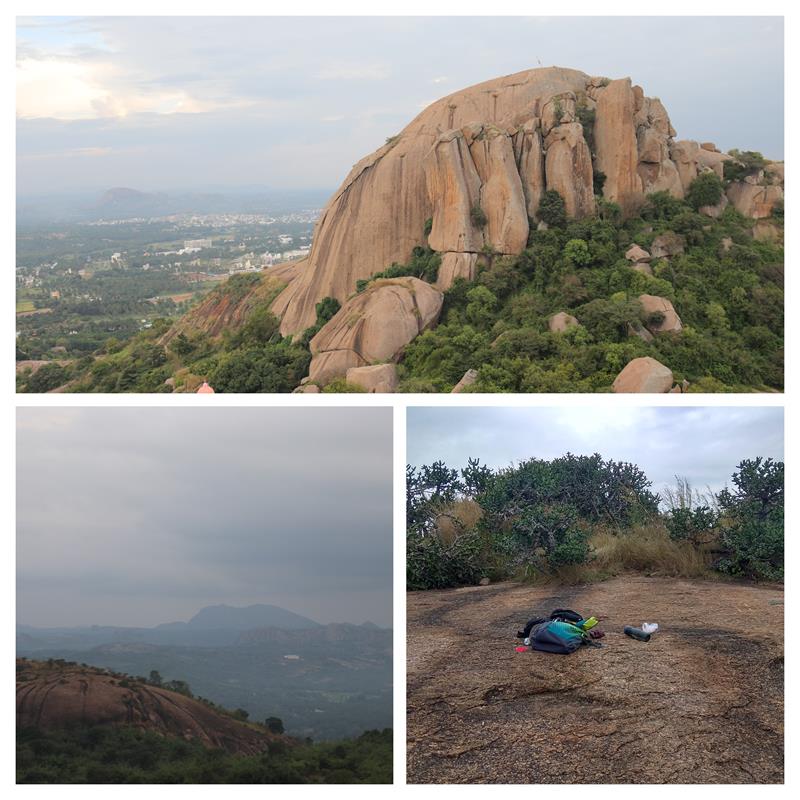 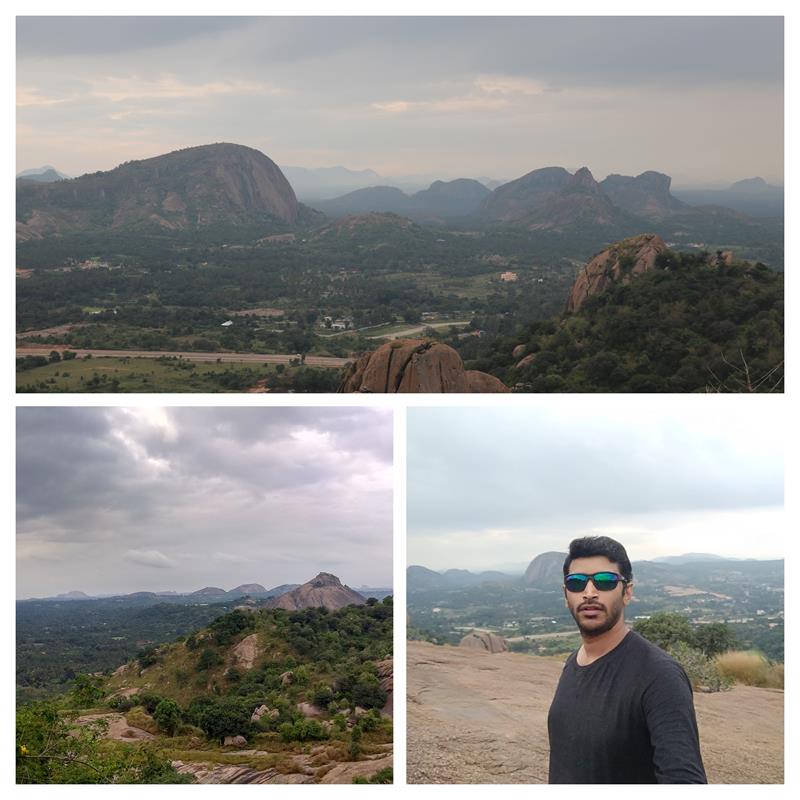 It was getting dark and finally time for descending and I enjoyed the adventurous steep. It took half an hour further to descend completely, the clock showed 5.30 and suddenly there were heavy rains. Appreciating my decision of getting a poncho, I covered the bag and transferred other valuable from my pockets to keep them dry. Headed back home and after reaching halfway, the rain subsided and I made it home feeling happy that my job of washing the bike is already done. Had dinner and enjoyed a good night's sleep cherishing the fantastic memories.

I highly recommend everyone who is yet to visit this wonderful place as it's a perfect option to get away from busy life and have an experience, which offers both adventure and relaxation.

I enjoyed reading your article. It was informative and I appreciate your work.

Thanks for sharing this information.