The word 'Malayattoor' came from the amalgamation of three small words in Malayalam; that is, Mala (Mountain), Arr (River), and Oore (Place). We say that's why, Malayattoor is a place where mountains, rivers and land meet.

Located in the north-eastern corner of Ernakulam district in Kerala, Malayattoor is a major pilgrimage place that attracts devotees in large numbers, particularly during the Holy week, just before Easter. It draws pilgrims not only from the state of Kerala but also from the neighboring states. Pilgrims who come to South India from the northern states of India do make it a point to visit this holy shrine of St. Thomas, the apostle who came to our motherland for the proclamation of the Holy Gospel.

The Malayattoor church is positioned on top of the Malayattoor hill, which is 609m high. This church has a life-size statue of St. Thomas and is dedicated to the apostle. The most significant part is that it has an imprint of the feet of St. Thomas on a rock. It has been sealed carefully with an outer casing made of glass. Thousands of people throng the shrine to see the imprint and pray before the statue. This shrine has now been accorded an international pilgrimage station. 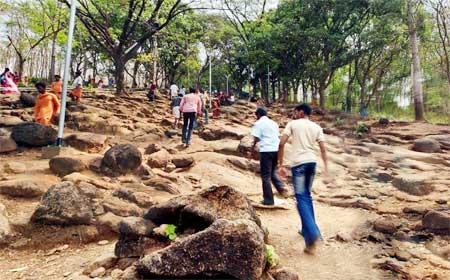 The entire mountain trail to the church at the top from the ground level is made throughout the thick forest region. The pathway, from both sides, is surrounded by dense forest and is full of massive rocks and trees. Way of the cross stations is constructed at proper intervals on the path. Pilgrims and tourists pray and sing hymns at each of these stations in remembrance of the way Jesus carried the cross. Some also call St. Thomas's name while climbing and descending the mountain.

There is also a sufficient number of stalls and shops offering refreshments and meals, both at the base of the hill as well as on the top. There are also ample ones on the way to the top.

Kurisumudy
Kurisumudy is a mountain that is 1269 ft above sea level. It is known as a place visited by St. Thomas, the apostle of Jesus Christ who came to India. It was St. Thomas who came to our motherland, on the directive of Jesus to proclaim the Good News to the whole world. He took upon himself this order and travelled from Palestine to India with some traders and landed at Kodungalloor in AD 52. During his 20 years in India, he founded seven communities of believers namely, Kodungallor, Palayur, Paravur, Kokomangalam, Chayal, Kollam, and Niranam.

St. Thomas died a martyr's death in AD 72 at Mylappoor, in Tamil Nadu.

This article gives information about Neemsar-Mishrikh, one of the most sacred pilgrimage to Hindus. This is known as the most acknowledged place for rishi muni to meditate, learn, study and acquire knowledge. Pilgrimage to Badrinath and Kedarnath considered incomplete without a visit to this place. This place is known as abode of 33 Crores God-Goddess.

The King of Pilgrimage - Pushkar - Most Sacred Dham For Hindus

Pushkar is considered as one of the five sacred Dhams for Hindu Pilgrims. It is known as the creation of Lord Brahma. It is also called "Tirth Raj" means "The King of Pilgrimage". It is believed that one can attain salvation by taking dip in holy Pushkar Lake. It is most popular for its rarest Jagatpita Brahma Temple and its Pushkar Fair.

The article provides detailed information about Kushinagar, which is one of the famous and sacred Buddhist pilgrimage places in Uttar Pradesh. Learn about the famous temples and places to see in Kushinagar. The article has all necessary information and would prove to be an excellent guide for those who plan to visit Kushinagar next time.

The largest annual pilgrimage in the world - Sabarimala

The article is about Hindu pilgrimage, Sabarimala. It is the world's largest pilgrimage centre. Millions of devotees visit this Lord Ayyappa temple every year. The article is all about it's importance and beauty.

Dear,
You are welcome to post any query of yours and I would be more than happy to help you.

It's a well informed article about Mecca. You have really touched upon all the aspects inside it like accommodation and contact numbers, in case of emergency.

But, the problem is of the grammatical and spelling errors which you need to get rid of. While typing, please be careful of the mistakes. Make it a point to type first in a word document and check for errors before posting the same on Indiastudychannel.