Must visit tourist places in Kolkata

Kalighat: Famous temple of Kali Ma, the holiest temple, said to be, one of the 51st Shakti Peethas, people come and offer prayer to Maa and returning there again to express their gratitude after fulfilment of their prayers.
Belur Math: It is founded by Swami Vivekananda, and it the headquarters of the Ramakrishna Math and Mission, Ramakrishna Paramahansa was his guru, it is one of the significant institutions, works for the upliftment of women, backwards classes, medical, spiritual and cultural activities.
Nico park: It is an amusement park, located in the Salt Lake City of Kolkata, various types of rides are there, you can have fun with friends and family.
Eden Garden: The most famous Cricket ground of India where international and historic matches have been played.
Botanical Garden: Saplings, plants, trees etc, these are taken from all over the world and planted there, the centre of attraction is the 'The Great Banyan Tree'.
Howrah Bridge: The huge iron bridge, spans the Hooghly river and bears the weight of heavy traffic, both vehicles and pedestrians, it is one of the longest, heaviest and busiest bridge. 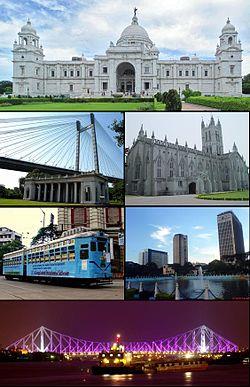 Victoria Memorial Hall: Ancient weapons, sculptures, queen dress made of gold, war materials etc. are displayed there.
Sundarban: Home of Bengal Tigers, the most area covered with mangrove forest, view of Bay of Bengal.
Science City: Displays various scientific technologies, basically to give an idea of how things actually work.
Race Course: You can have fun, betting on beautiful horses and most shows are held on Saturday and public holidays.

In daily life, Bengalis love to eat a variety of foods, especially fish and most liked fish are Rohu, Hilsa, Koi, Pabda, Prawns, Crabs and they are cooked in varied forms, the main meal includes, Rice, Fish, Posto or poppy seeds, vegetables and sweet includes Misti Dahi and Roshogolla.

Now, if we talk about books and films, the first name which comes to mind is one of the famous writer Sarat Bankim Chandra Chattopadhyay and Rabindranath Tagore.
People grew up reading books written by them and in films who can forget the famous and veteran actor Uttam Kumar.

Some of the famous books written by Sarat Chandra Chattopadhyay are Bindur chhele, Parineeta, Devdas, Pather Dabi.
Rabindranath Tagore one of the greatest poets, he renounced his Knighthood given to him by King George V to show his protest against the Jallianwala Bagh massacre. He was awarded by Nobel Prize in Literature.
His famous works are Gitanjali, Gora, Ghare-Baire, Jana Gana Mana, Rabindra Sangeet, Amar Shonar Bangla.


The most awaited festival and for which Kolkata is known is the famous Durga Puja. As soon as the dates of Durga Puja comes near, the whole Bengal tends to indulge in the preparation of Durga Puja, Amazing Pandals based on themes, which also displays the social message, Durga Puja brings the dear and far ones near.

The Durga puja precedes with Mahalaya and ends with Lokkhi Puja.

It is believed that Ma Durga comes to visits her father's home once in a year with her children Lakshmi, Saraswati with Ganesha and Kartikeya, and on the six-day i.e all the idols are taken form immersion in water, leaving to reunite with Shiva.

So, if you love to explore and visit places, love to eat, passion for music, a joy to celebrate, then Kolkata is the best place to visit.

Kumarakom Bird sanctuary is located amidst the mangroves of the Vembanad Lake, in the Kottayam District of the state of Kerala in India.

The author of this article had nearly covered all major tourist place to be explored in Kolkata. Some of the additional tourist places that tourists can explore include Birla Planetarium, Indian Museum, Marble Palace Mansion, Mother House, St.Paul's Cathedral, Tajpur beach, Birla Mandir etc.