Summer vacations are just a couple of months away and many families might have already started their preparations to go on some worth seeing tourist destination. If any of you are still unsure as to where to spend the vacations, this article would give you some details about very good and worth seeing pilgrim places in Maharashtra. The photos in the article have been taken by my personal camera.

Places of worship and pilgrimage in Maharashtra

Maharashtra, country's wealthiest state, is known for its rich cultural heritage, pleasant hill stations and Bollywood. But apart from this the state of Maharashtra also offers people with some of the most remarkable places of pilgrim and worship that draw many devotees, with utmost faith and belief, to them every year .
One can start the pilgrimage tour of the state, the abode of Lord Ganesha, by taking"Sri Ashtavinayaka Yatra"-a tour of eight ancient "Ganpati temples". The five temples out of these are situated in Pune district, two in Raigad district, and one in Ahmednagar district. The most outstanding aspect of these temples is that each temple has its associated history and legend that is unique and interesting and also every idol of Lord Ganpati is different from each other with respect to its appearance and the orientation of His trunk. According to the shastras the eight Ashtavinayakas are said to be swayambhus i.e. they have been formed naturally without any interference from the humans. It has also been written in shastras that the Ashtavinayak yatra must begin with Mayureshwar Ganpati, Moregaon(in the photo) and then followed with a visit to Siddhatek, Pali, Mahad, Theur, Lenyadri, Ozar, Ranjangaon and then again Moregaon. This would end the Ashtavinayak Yatra. 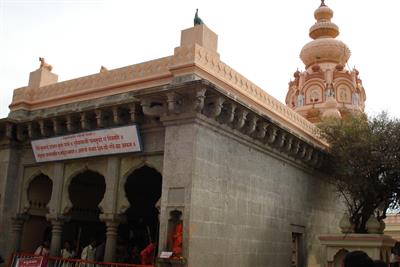 The Ashtavinayakas in order are:-


There are many tour operators in Pune, Mumbai and other major cities across Maharashtra that offer this pilgrimage tour. But it is more convenient to take this tour from Pune due to the close proximity of most of the temples to the city.

After one completes the Ashtavinayak yatra at Moregaon, on way back to Pune, there is another ancient pilgrim place called Jejuri. It is the home of Lord "Malhari Martand" or "Khandoba", the most revered god for the Dhangaras which is one of the oldest tribes of India. He is considered an "avatar" of Lord Shiva. The temple is situated on a hillock and the path to it is well connected with about 400-500 stairs carved out of stone. 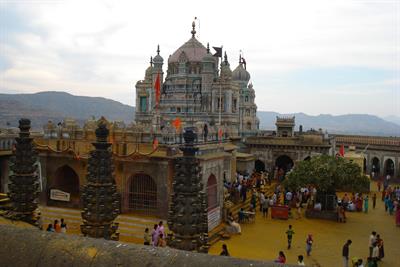 Here Lord "Malhari Martand" is given the offerings of turmeric and coconut. This is why one would see the entire premises of temple coloured in yellow. Even the pilgrims get painted yellow once they step into the temple.

The state of Maharashtra also hosts 3 out of the 12 "Jyotirlingas" that are again one of the most popular pilgrim places. The mythology and "purans" believe that Lord Shiva transformed Himself into the form of piercing ray of light at these 12 places referred as "Jyotirlinga" and hence this form holds a special place of reverence and holiness amongst the people. The first Jyotirlinga is situated at Trimbakeshwar near Nashik city. Trimbak as it is popularly known, is a small village well connected by roadways from Nashik. It is surrounded by hills on all sides and also adorns the Brahmagiri hill, which is the origin point of river Godavari. Thus Trimbakeshwar is considered the most pious place for performing all kinds of auspicious rituals and "pujas" and also all the after-death rituals like "shraddh". Today there are many tourists who visit this place for pilgrimage and worship. One can get easy conveyance of a state transport bus or can hire a taxi to Trimbak.

The second "Jyotirlinga" in the state is located at Grishneshwar, 11km from Daulatabad in Aurangabad district. It has also close proximity from Ellora caves. This temple was reconstructed by Ahilyabai Holkar in the 18th century. The legend says that Lord Shiva, pleased by the devotion of a woman called Kusuma, appeared before her and gave her blessings in the form of this "Jyotirlinga". Since then this came to be known as Kusumeshwar and later Gushmeshwar to the present form of Grishneshwar.

The third "Jyotirlinga" is located 50 km from Pune city at Bhimashankar and is beautifully placed in the lap of Sahayadri Ghats. It is here that the river Bhima originates and joins Krishna river on the south-east. Covered with dense forest and lofty hill peaks alongside this is rich in varied flora and fauna and hence can aptly be referred to as pilgrim's paradise. The Bhimashankar temple was made in 13th century and has unique Nagara style of architectutre and is built in serene and scenic surroundings making it a favourite trekking point and a prime holy place of worship at same time.

Another major pilgrim place which is highly revered by the Sikhs is the Takht Sachkhand Shri Hazoor Saheb Gurudwara. It is one of the five Takhts of Sikhism and is located on the banks of river Godavari in Nanded city. It was built in the 1830s by Maharaja Ranjit Singh. This pilgrim place holds special meaning to the Sikh community since it was here that Guru Gobin Singhji breadth his last and was cremated. Every year on the death anniversary of the Guruji, this holy place witnesses hundreds of devotees from far and distant places. In 2008, the gurudwara celebrated the 300th death anniversary of Guru Gobind Singhji and saw PM Manmohan Singhji as one of the pilgrims.

Pandharpur is the abode of Lord Vitthal or Vithoba (form of Lord Krishna) and is one of the prominent pilgrim attractions in Maharashtra. It is situated on the river Bhima in Solapur district. The river is also refered as "Chandrabhaga". Pandharpur witnesses four major yearly pilgrimages or yatras specifically in the Hindu calendar months of Ashadh, Shravan, Kartik, Magh. Out of these the Ashadhi yatra is the most pious and draws over half million of people from far and distant villages and other places covering long distances on foot. This yatra ends on the "Ekadashi" of the month. The temple is an ancient one with the idols of Vithoba and Rukumai.

Apart from all the above mentioned pilgrim places there are some other worth visiting places of worship and are put in high regard like-Tuljabhavani at Tuljapur, Saint Sri Swami Samarth at Akkalkot, Samadhi of Saint Dyaneshwar at Alandi and Lord Dattatreya at Ganagapur etc.
I hope the above article would prove a good guide to anyone who wants to visit some holy and spiritual places in Maharashtra during this summer.

Pilgrimage to 'Mandi': The location of faith, adventure and nature

This article takes you to the place called 'Mandi' in Himachal Pradesh. Every corner of Mandi is decked up with natural beauty along with cultural aspects. There are so many such untouched places of tourist's importance, which, when seen once, would attract you repeatedly. Let us wade through this place through this article.

The Catholics, world over, hold the city of Vatican as the ultimate pilgrim destination. It has been the home of the Bishop of Rome since many centuries and today also this place is revered the most among all its devotees. The Pope, who is considered the highest authority among Catholic Christians resides here and thus is an important place to visit. This article gives a description about the Vatican City and some major pilgrim places present there.

Due to the geographical locations and conditions of India, adventurous sports are becoming more and more popular. This resource will show you some of the best locations for different kinds of adventure sports like trekking, mountaineering, river rafting, rappelling, bungee jumping, para gliding, sky diving, jet skiing etc.