It was already the second week of our winter trip to Himachal Pradesh for our group - Myself and 3 of my college best friends. We had just checked in at a hotel in Manali the previous night, after a long journey of over 250 Kms from Dharamshala, the place where we spent our New Year 2022. By the time we got up and had our breakfast in the morning, it was already 11.30 AM but we were still tired from the journey through the difficult terrains. Although we planned to stay in Manali for the next 4-5 days, the weather forecast predicted snowfall for the entire week, starting from the afternoon of the very same day. Since it was luckily still Sunny, we decided to take advantage and visit Atal Tunnel, which was on my bucket list from the time it was open for tourists.

We talked to a taxi driver nearby to confirm that the weather is suitable for travel and requested him to wait for 45 minutes for us to get ready.
Only 2 of us were in for this plan - Srineel and Me. The other two friends sadly had to work as their scheduled leaves were over.

After getting ready, we started our journey through the narrow roads of Manali and as we crossed the city limits, we could see glimpses of snow-capped Humpta pass peaks - which is a popular multi-day trekking destination in Himachal. As we passed by, our cab driver showed us the Apple farms right next to the roads and since this was winter season, the trees had shed all the leaves and only the branches stood by.

Apple farms in the background

We got stuck in traffic for a while as we passed by the famous Solang Valley - which is the tourist hub for people staying in Manali, because of the attractions like Cable Car, Skiing activities, etc. We did not stop there as we had less time to reach our destination and also because the weather was uncertain. There was a lot of fresh snow on either side of the road as we travelled further, the amount of snow increasing with every mile. In a few areas, we noticed people enjoyed playing, sliding in the snow, and building a Snowman for their liking. After travelling for 10 Kms in the scenic views further up the mountains, we could see the entrance to the Atal Tunnel. 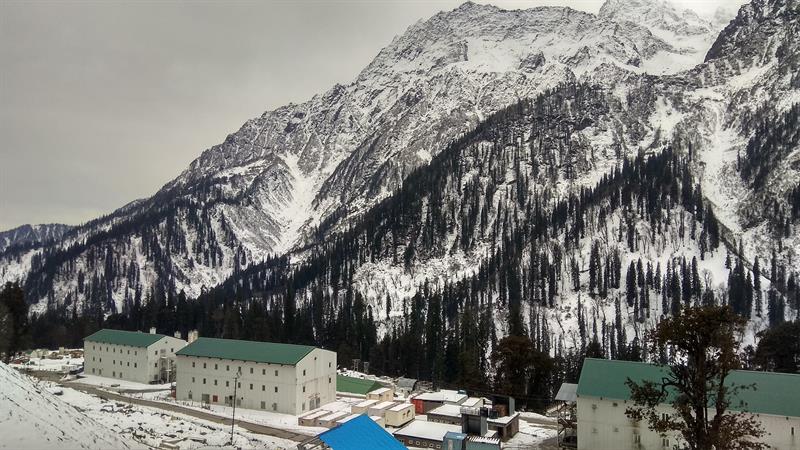 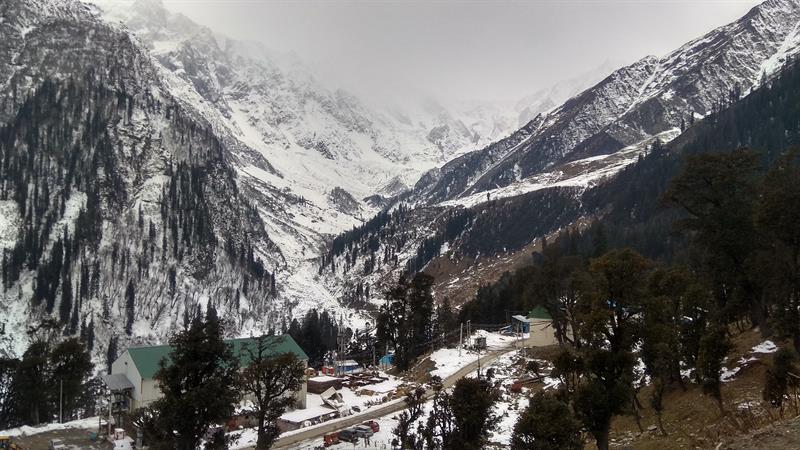 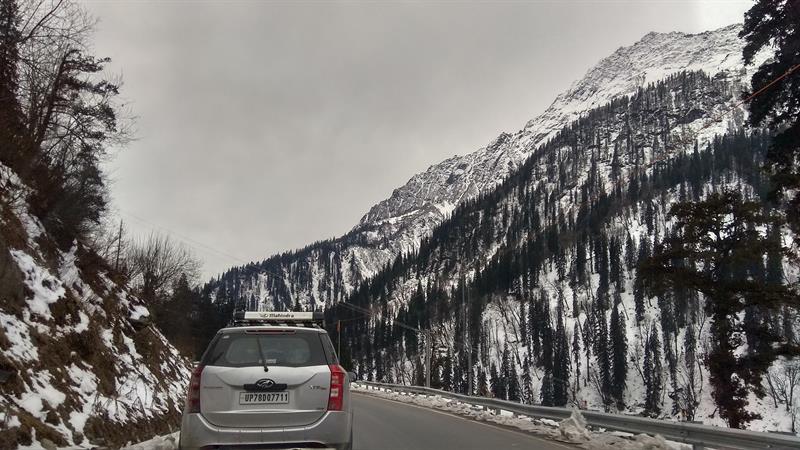 Atal Tunnel is an All-Weather 9 Kms tunnel which is carved out to cut the travel time in the strategically important route of Manali - Leh. It is the world's longest single-tube highway tunnel above 10000 feet (Stands at an elevation of 10171 feet). It reduces the travel time from Manali to Keylong (in the Lahaul region) by 4 hours and most importantly avoids road closures during winters. It is named after Atal Bihari Vajpayee and was inaugurated on 12th December 2020 by Prime Minister Narendra Modi. It is one of the proudest achievements of our nation, considering the challenges of the design and the benefits it provides.

As we entered the tunnel, we noticed that it was world-class in design and the roads were very well maintained. It is a two-way tunnel with a single lane for each side of the road. There were exits every few meters and enough signboards guiding the same. A strict rule of no stopping was adopted inside the tunnel and the speed limit was 60 Kms per Hour. The journey inside the tunnel was very smooth and we could cover it in 15 minutes. 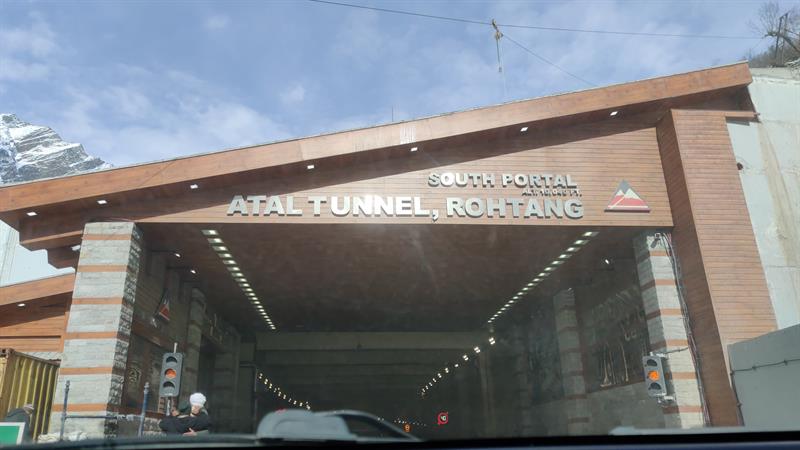 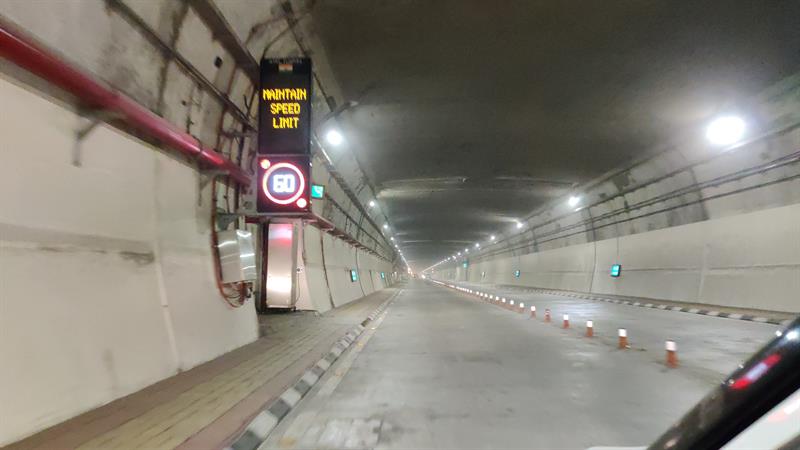 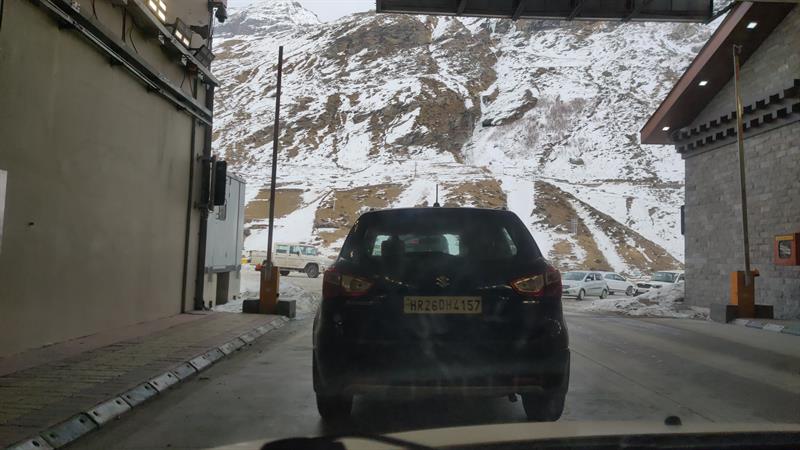 As were exited the Atal tunnel and entered the Lahaul region towards our next destination Sissu - which was just 3 Kms, the difference in the scenery was unquestionable. There was "Snow White" everywhere and the landscapes had huge mountains nearby both sides of the road. The scenes were breathtaking to be very honest and we were pretty sure that this is what Heaven would look like. Our cab driver reciprocated our take by calling the place Jannat. To enhance the beauty of the scenes was the crystal clear River Jamuna, which flowed nearby and was visible throughout our journey ahead. We were in awe of the beauty of the place and could not believe such a place existed and we did not know about it before.

The photos, however great it may seem - do not make justice to the feeling that one experiences the place in person. 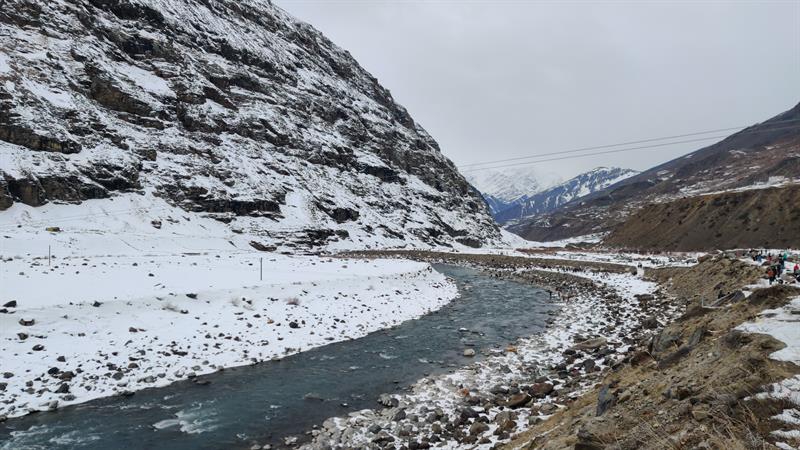 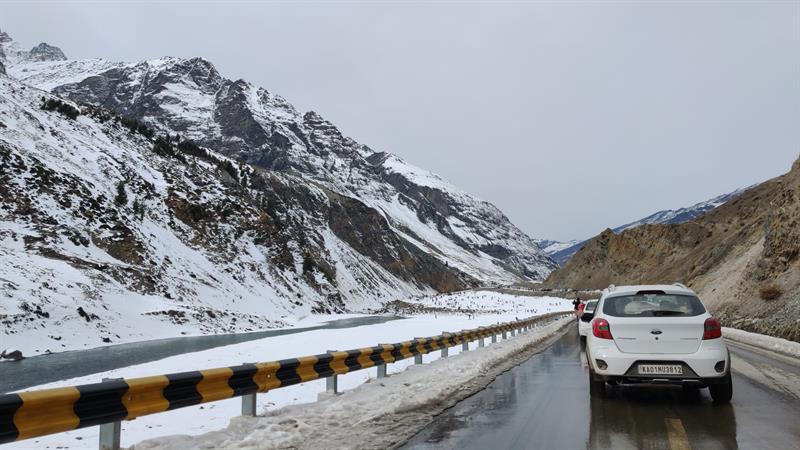 As we reached Sissu viewpoint (Sissu Helipad Point), we got down the cab and told the driver that we would call him once we are back - we were pretty sure it would take a long long time to savor the beauty.

Even though the temperature was 0 degrees, we were able to bear the cold as it was Sunny. We noticed a few camps set up by locals to sell snacks and refreshments for tourists. Needless to say, we took the opportunity to enjoy Maggi and hot Tea in that weather. 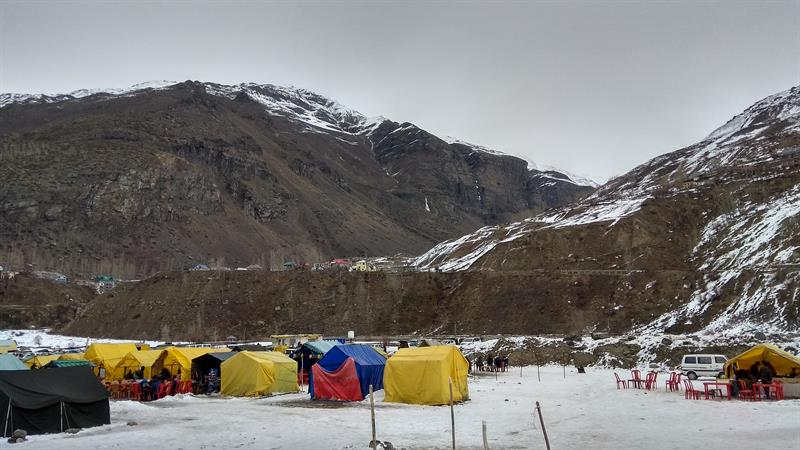 We took time to enjoy the astounding beauty of the place, which was one of the most scenic places I had ever witnessed. Clicked a lot of photos, each snap looked like desktop wallpapers. After playing with snow for a while, we headed to a place where a few adventure sports were organized - which included Ziplining and Bungee trampoline. Ziplining was crowded and we had to wait for 30 minutes for our turn, but the experience was very much worth it. I tried Bungee trampoline for the very first time. It was a little scary because of the sudden jumps and drops, but it was enjoyable even though I felt butterflies in my stomach the entire ride. 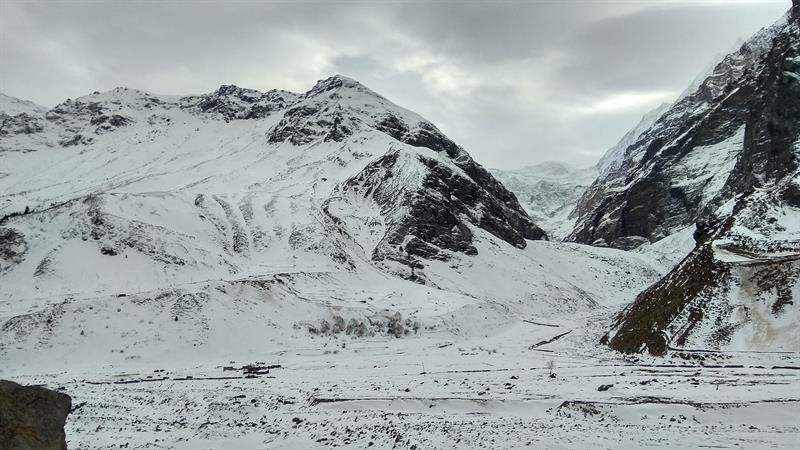 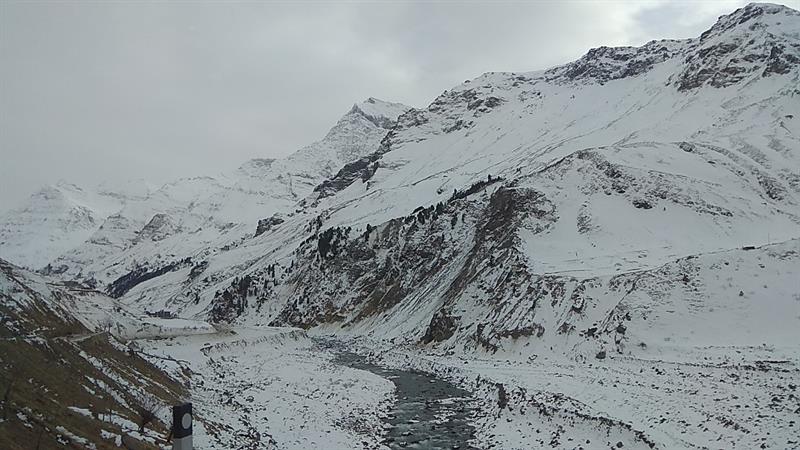 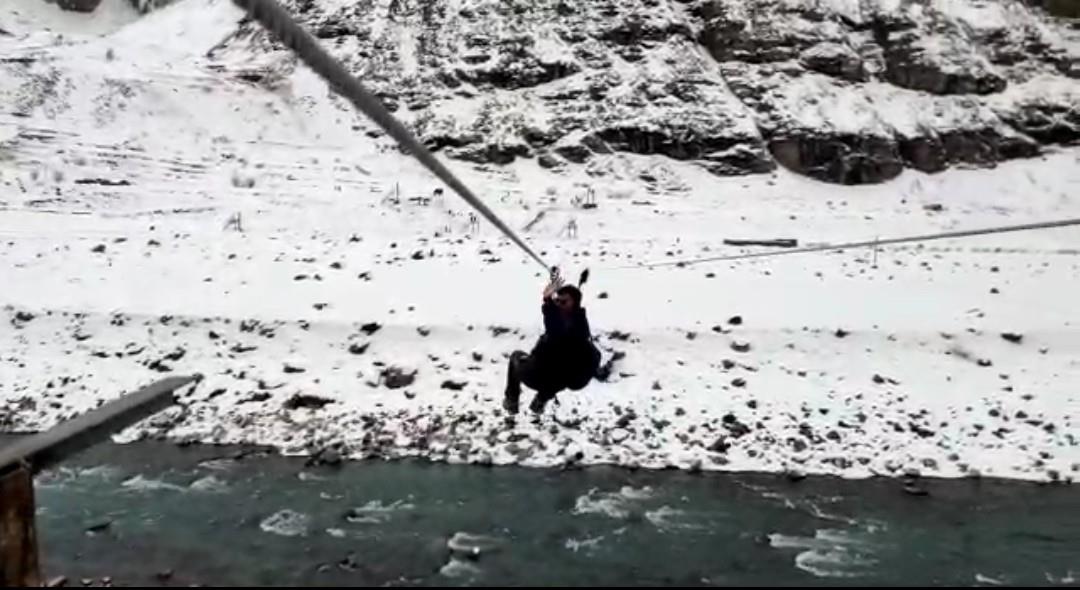 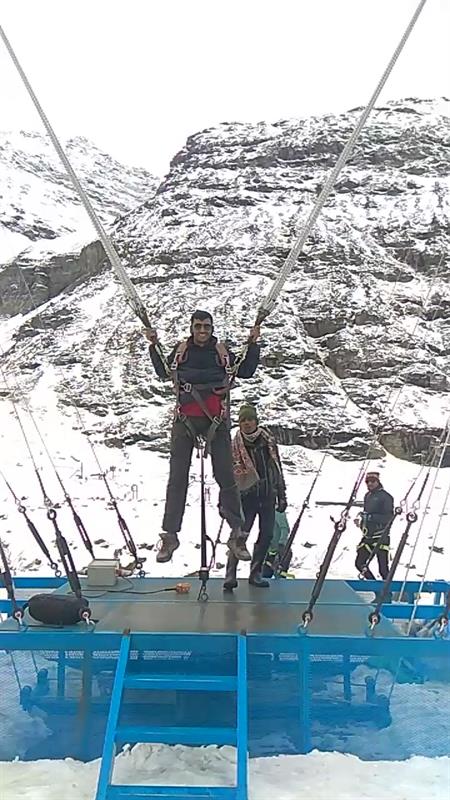 We wished to spend more Time at the place and dint feel like returning soon, but we had to hurry as it was getting dark, and we were constantly getting calls from our cab driver to ensure that we crossed back Atal Tunnel in time.

There was a heavy traffic jam on the way back, especially near Solang Valley as many tourists were returning to Manali, but we did not mind as we were still relishing the memories of the day. It was a day well spent and one of my most memorable experiences of the trip.