I had only seen pictures of Manali city after snowfall and ever since, it was my dream to watch it live - because of the exquisite views which are formed after a snowfall. The fresh snow on deodar and pine trees covering Manali city are a sight to behold and the beauty of Mall road only gets better with patches of snow covering the buildings and streets.

It was the first week of January 2022 when we reached Manali. Our group of 4 college best-buddies - having just celebrated the New Year in Dharamshala, wanted to explore a city in Himachal with comparatively colder temperature, more scenic and options for some adventures - and Manali did fit all of these criteria.

We had 4-5 days in Manali and the first day was Sunny, which was perfect for us as we visited the famous Atal Tunnel and Sissu. I have earlier written a blog on the same.

I was personally tracking the weather forecast in Manali and there were great chances of snowfall on Days 2 and 3.
Though it meant that we may not be able to do any sightseeing on these days ( we had plans of visiting Hampta and Kasol, which are each full-day trips) because of roadblocks, I was happy to tradeoff these 2 days to catch the marvelous views inside the city.

Got up in the morning around 9 AM and could notice the drizzles outside. We had a hot breakfast at the hotel restaurant, after which we checked the weather outside. There were still drizzles but we could notice that the temperature had dropped by a couple of degrees. I made a quick phone call to a cab driver to check the feasibility of a day trip to Hampta, who informed me that the roads to Hampta were closed due to heavy snowfall in those regions. We decided to cancel the plan, stayed indoors, and hoped for snowfall sometime during the day. I took a good 2 hours nap in the room and was woken up by the call of my friend, who was in the other room. He told that the snowfall had started just then. I got out of my bed in a gist and peeped outside the windows. The drizzles were slowly turning to snow and at this point, it was not full snow but a mix of water and snow. I quickly left my room and came to the entrance of the Hotel, hoping to get a better view. Within 10 minutes of observation, I could see the rain transition to soft snow. The snowdrops were caressing the ground and the ground was turning white with every drop of snow. 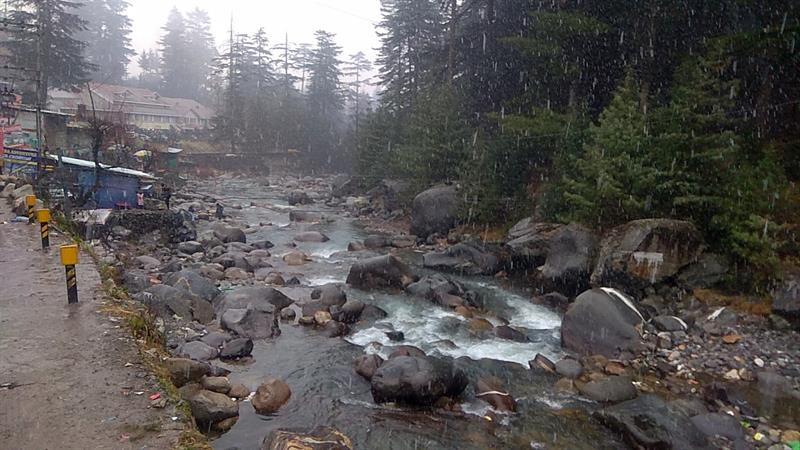 The transition of rain to snowfall 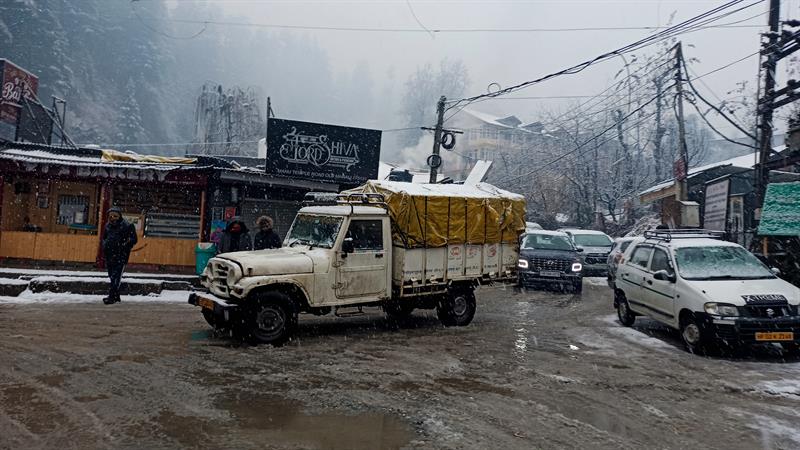 I enjoyed the views of the snowfall and even went for a short walk after quickly wearing my waterproof jacket. At this point, the trees and the rocks on the Manalsu River(which flowed nearby our Hotel) hadn't changed the colors yet as the snowfall had just started. I headed back to my room and waited for an hour before going out again.

The views on the return were splendid and much better than I had hoped for. All the trees which were visible from our place were now half-white, half-green. There were patches of snow collected on top of vehicles that were parked nearby. 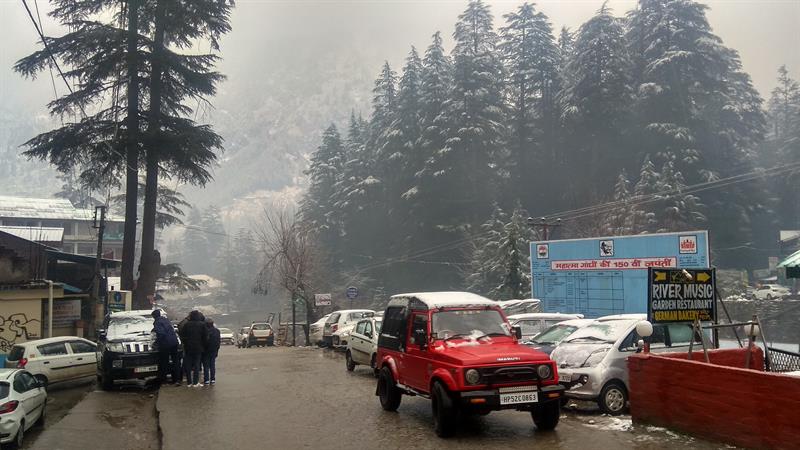 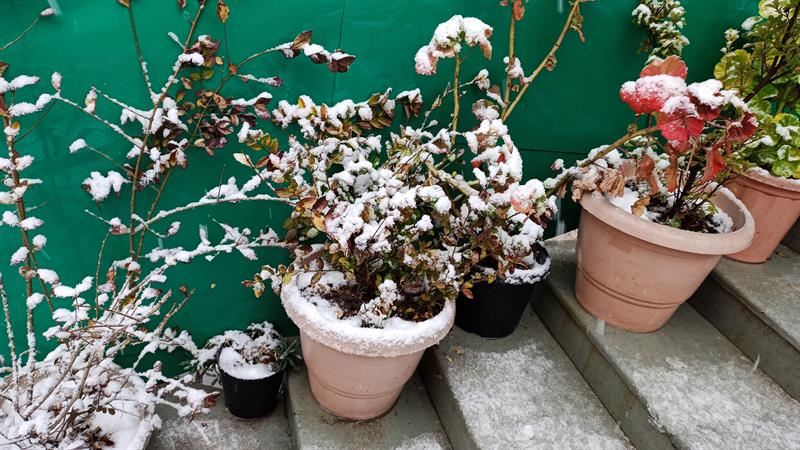 It was a perfect time to visit Manali Mall road and I hurried my friends to get ready. We took an auto to Mall road, which was 2.5 Kms from our place.

As we entered Mall road, we noticed that it was crowded and there was not much snowfall in the area, as it was located at a comparatively lower altitude. But we did get a marvelous view from the local bus stop, which was just next to the Mall road. The views were similar to the landscapes presented in the Walt Disney movies and we were amazed by the beauty. 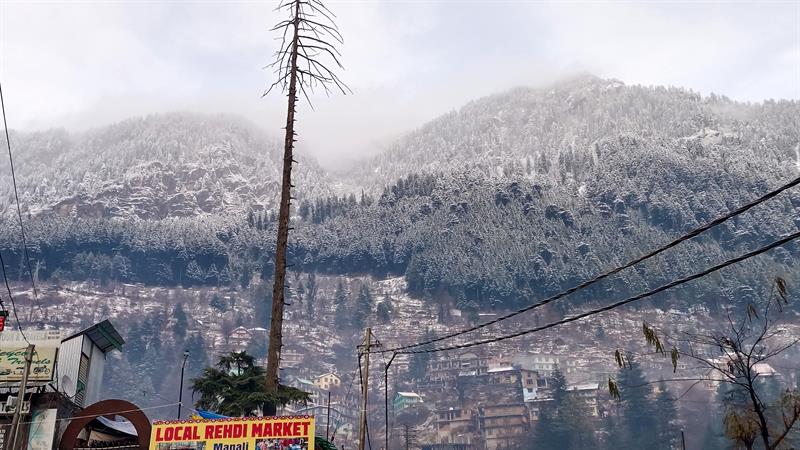 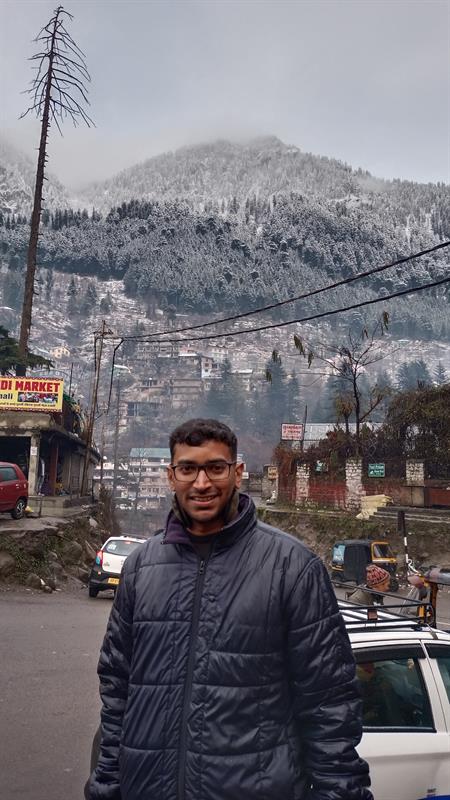 We visited a famous restaurant Hotel Aashiyana in the mall road for snacks and tried a lot of different items on the menu, which even though priced pretty high - were all delicious. We headed back home in a short while as some of us had to finish our office work. 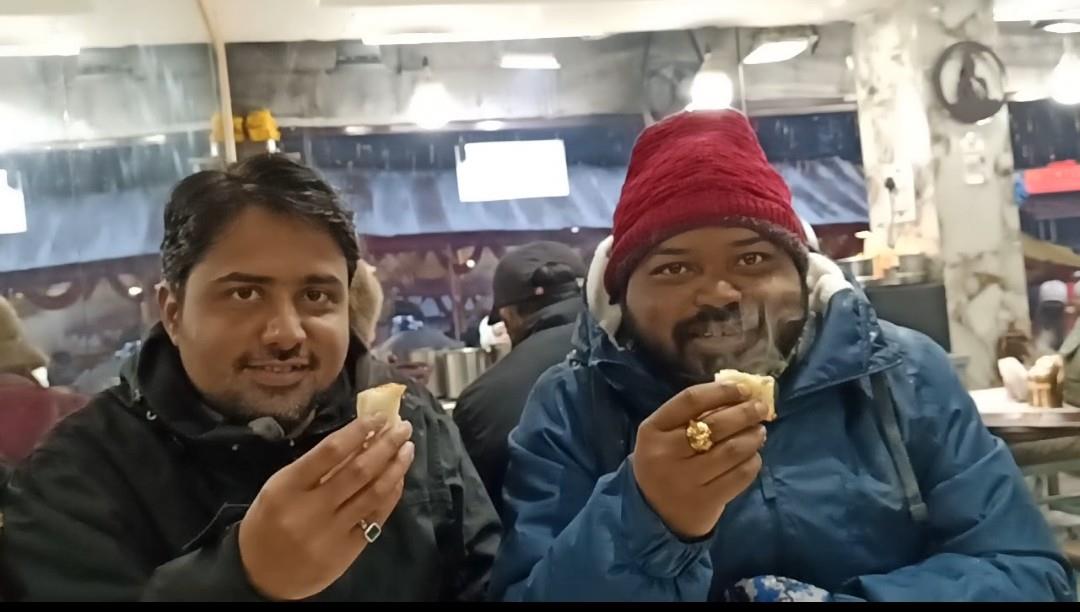 The next day started similarly with continuous drizzles from early morning. By noon, snowfall had started and it was heavier than the previous day. Views around started to get white pretty quickly and turned out to be fascinating. 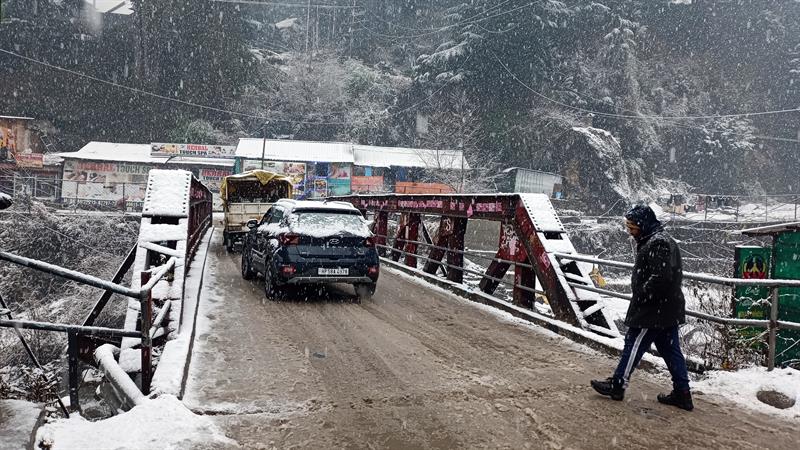 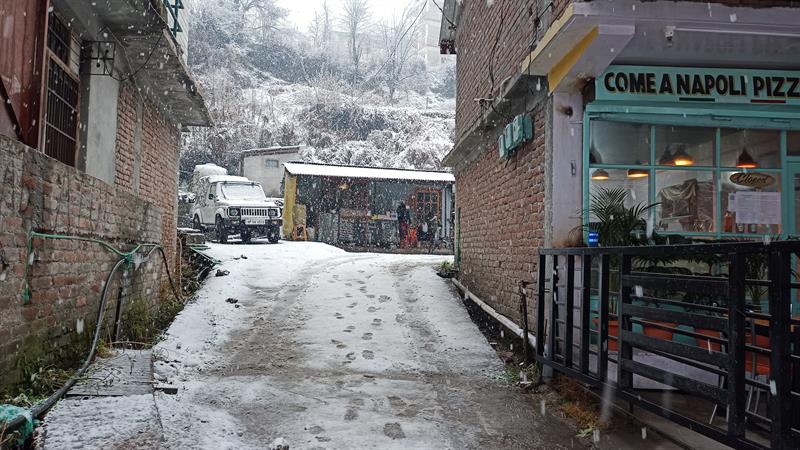 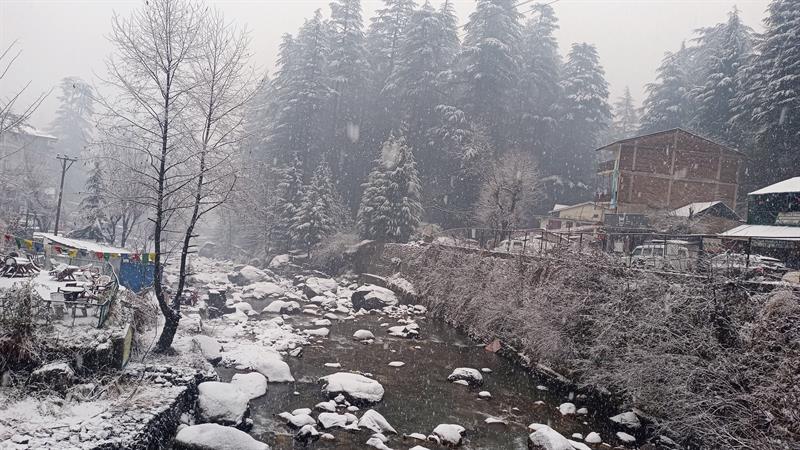 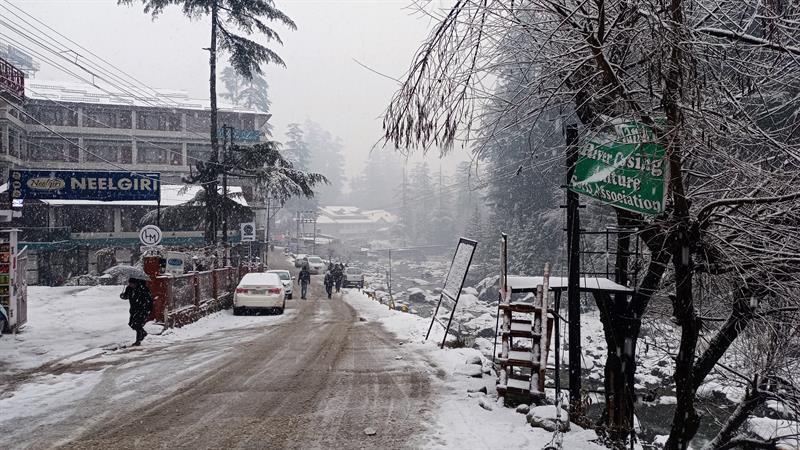 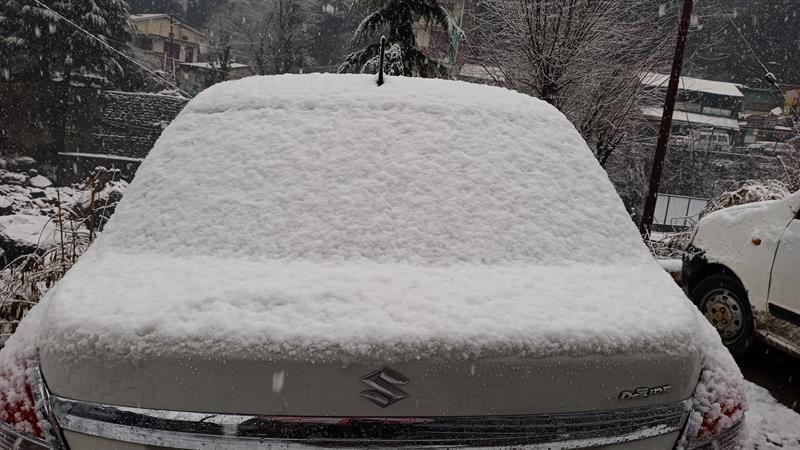 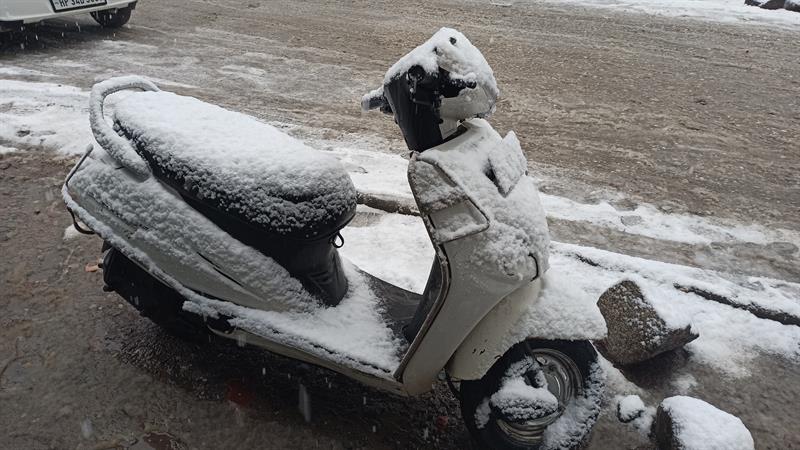 Transition of the Manalsu River

As we had missed the snow on the Mall road on Day 1, I asked my friends to accompany me for a quick ride, but they couldn't make it as they were stuck with office meetings.

I decided to travel alone, requested an umbrella from the Hotel Reception, and quickly hired an Auto. The roads were slippery due to heavy snow and it was a tough ride with a long traffic jam till I reached the destination.

As I got down from the Auto and looked on to the Mall road, my dream had come true. There were patches of snow on top of all buildings, snow could be seen everywhere - and the snowfall still continued. I took a walk around the street, it was tougher than I thought. The road was slippery and the weather was chilling. I managed to take some photos by dating to remove my hand gloves. Tried some local food again at Hotel Aashiyana for satisfying my taste buds. 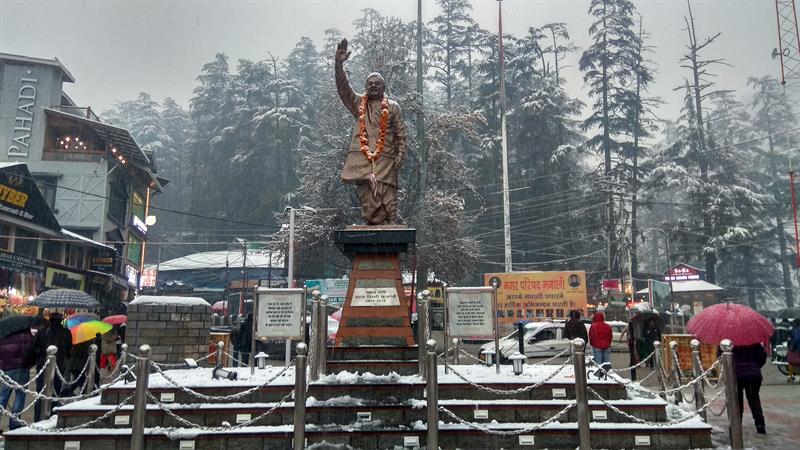 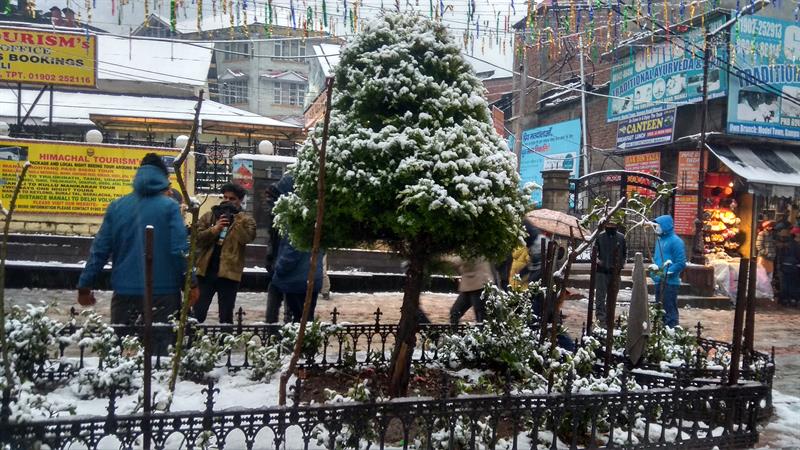 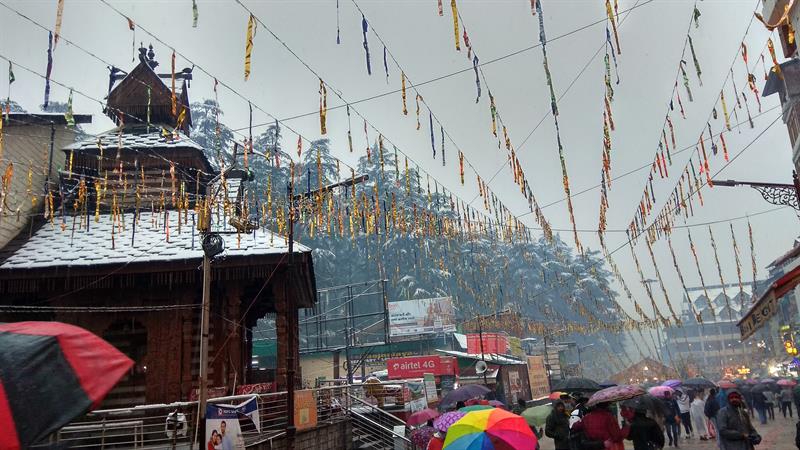 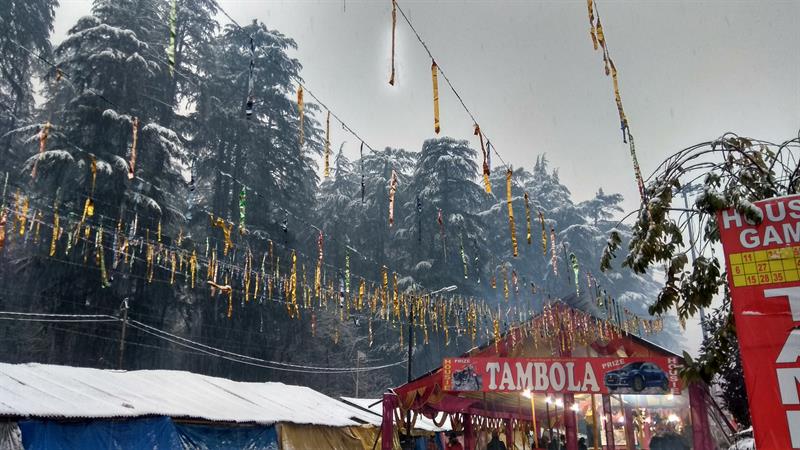 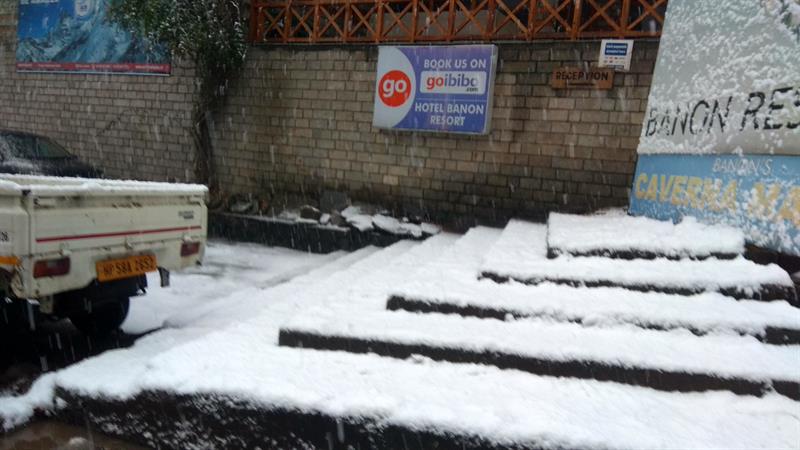 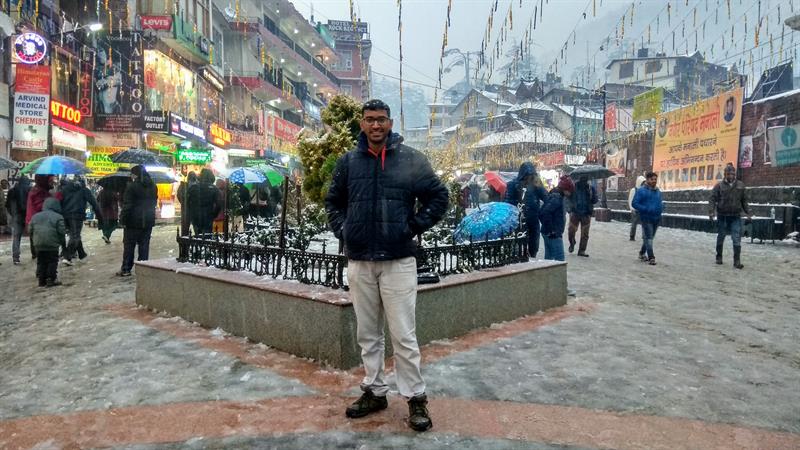 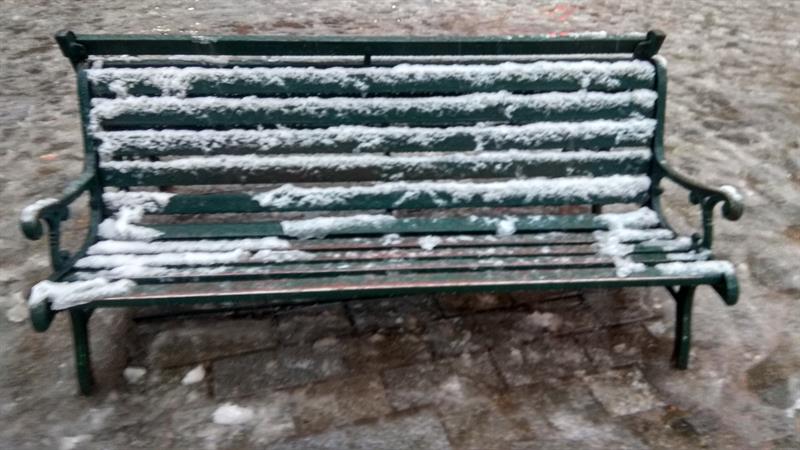 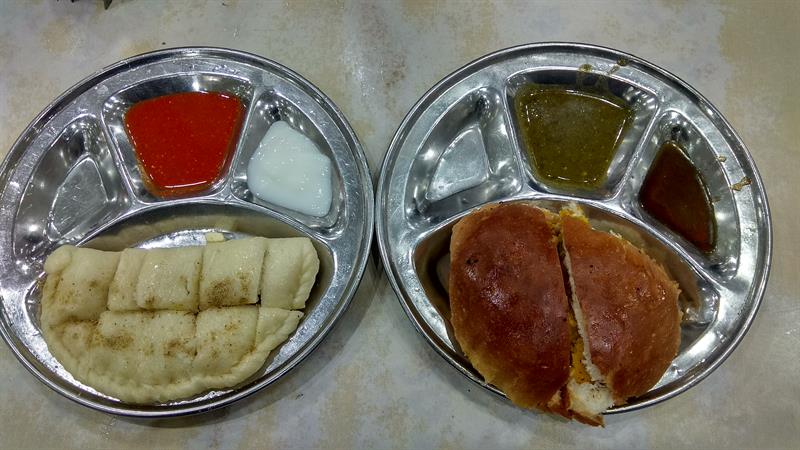 The snowfall continued through the night and became more extreme and we had to cut short our Manali trip and descend the same night as the weather forecast now predicted heavy snowfall for the next 5 days, which meant that we could get stuck in Manali as most cars would not be able to make it to our Hotel(which was situated at an elevated Old Manali region) if roads are too slippery. We learnt an important lesson on the day that - When we are in the Himalayas, it is not us but the mighty mountains that decide the rest of the journey.