I am sure many of you have been on Spontaneous/unplanned trip atleast once, here are some reasons why I think it's great. One - It involves no preplanning like coming up with itenary, researching for sightseeing spots, accomodation, etc. Two - we don't get into "can't wait for the trip", "guilt of not packing your bags on time" situations. And Three - most importantly spontaneous trips have high execution rate, reason being we keep it simple and do not think too much !!

It was Friday evening and I had no plans for the weekend. Was just conversing with Harish over text, while an idea came to mind that we plan a one-day bike ride. Harish is always excited about the Western Ghats ride and we both agreed on the below plan

Because the journey was pretty long for a day's trip, we decided to start by 5 AM in the morning so that we have enough time, and planned to reach back around 10 PM.

The next day morning, Harish had some urgent work to take care of and informed that he would confirm by 10 AM about our ride. I waited till 11 AM in the morning and did not get any response. Just as I thought that the trip would be cancelled, he called me at 11:15 AM and told that he would reach home in a while and he suggested that we start in the noon. We were already late and the to-and-fro journey couldn't be completed on the same day. After discussion, we decided that we would extend the trip by a day, returning on Sunday night to Bengaluru.

After getting ready, we started from home at 2 PM and even though it was winters, the weather was pleasant - Sunny with cool winds breezing. After a comfortable ride, we reached Solur - which is 5 Kms after the deviation from Nelamangala towards Hassan road. We decided to have Lunch at a vegetarian restuarant right next to the highway - Udupi Gardens.

We resumed the journey at 3:30 PM, our next target was Hassan which we estimated to reach by 5:30 PM. The journey ahead was smooth as the highway was in good condition except for a few repair works. Reached Hassan by 5:30 PM as predicted and it was almost dark. 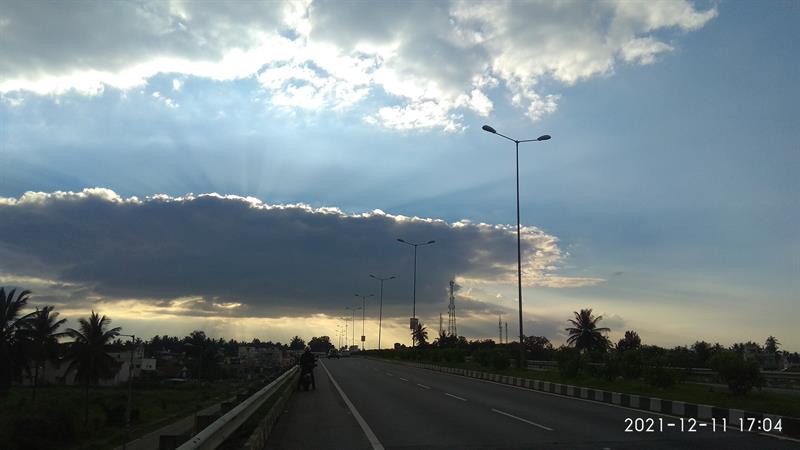 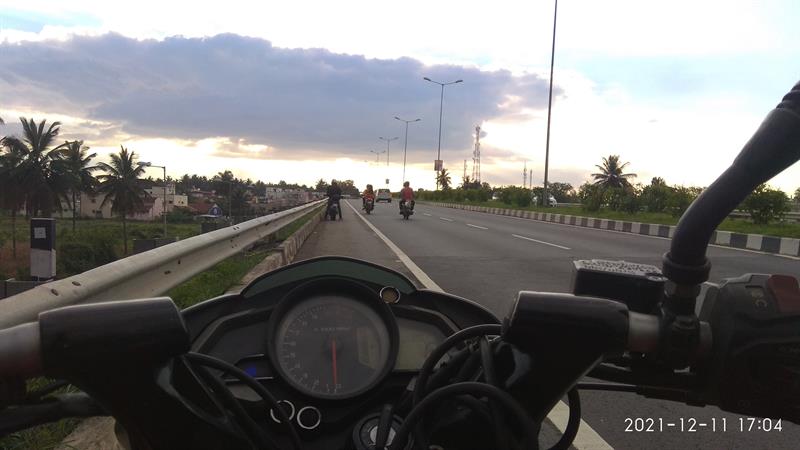 We stopped near a bakery nearby to have some snacks. While enjoying hot Tea and corn, we decided that we would halt somewhere before Charmady as both of us wanted to savour the views of the amazing Western Ghats. We searched few options in Mudigere and decided to move ahead to Kottigehara when we heard(from a person at Petrol Bunk) that there are few options for stay, and also because it is much near to Charmadi. Reached Kottigehara by 8 PM and stayed at a beautiful house amidst nature, we were provided with a guest room on rent in the first floor. There are small hotels in Kottigehara and are very popular and people travelling to Dharmasthala usually stop here. Famous for freshly cooked Neer Dosa (a local dish of Karnataka) and Chilly Bajji - we obviously couldn't miss. Also packed dinner to have at our room, which was just a mile from this place. 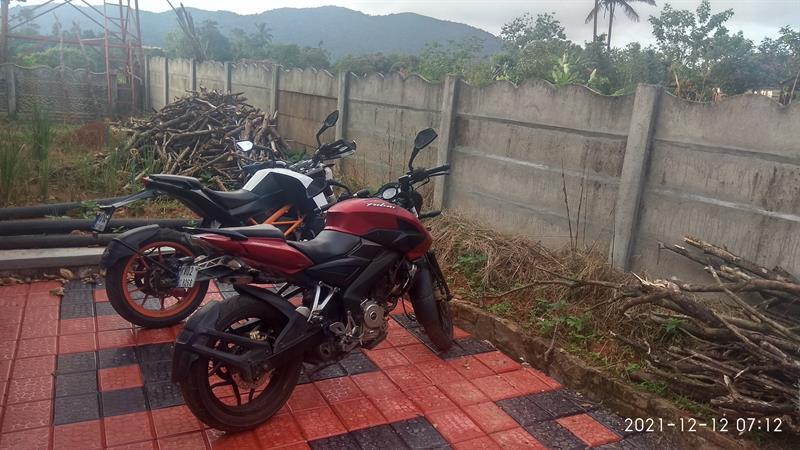 Day 2 : Journey to Dharmasthala and more changes to our spontaneous trip

After a good night sleep, we were ready by 8 AM and resumed our journey. Charmady is known for its picturesque beauty and we were invited with some amazing scenic views. We stopped by in a couple of places to enjoy the beauty. 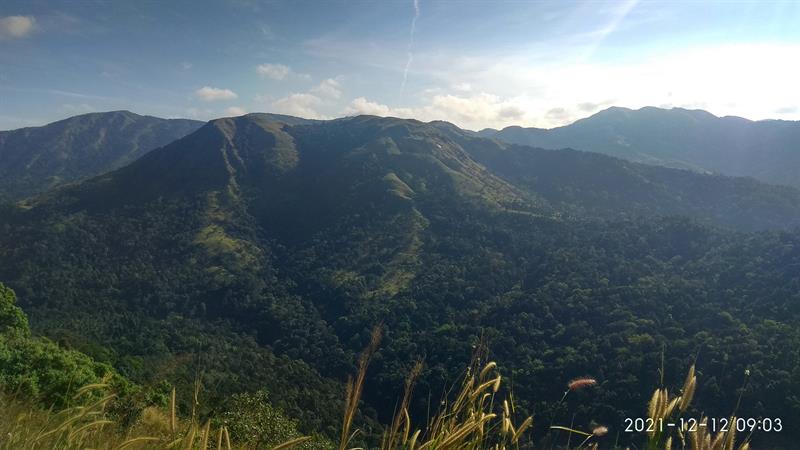 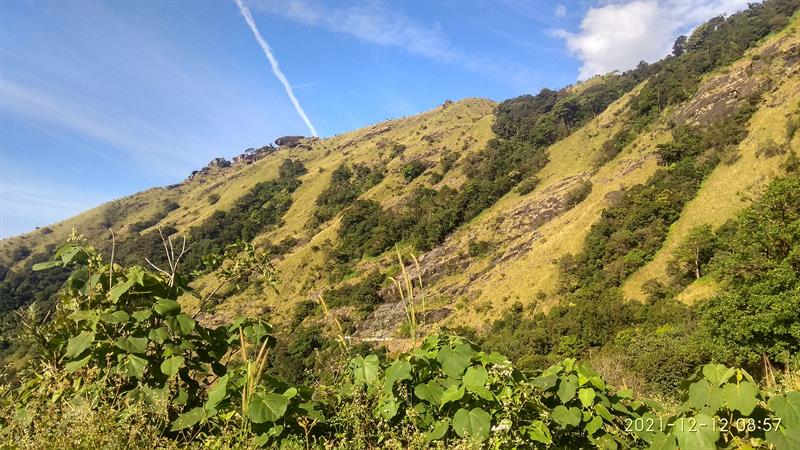 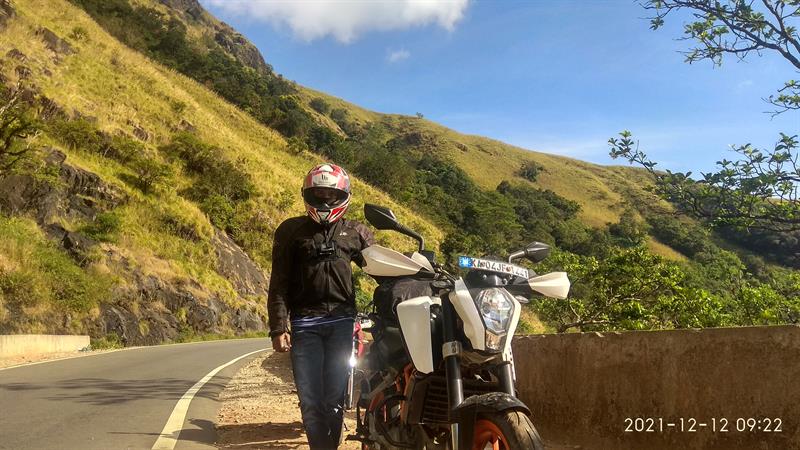 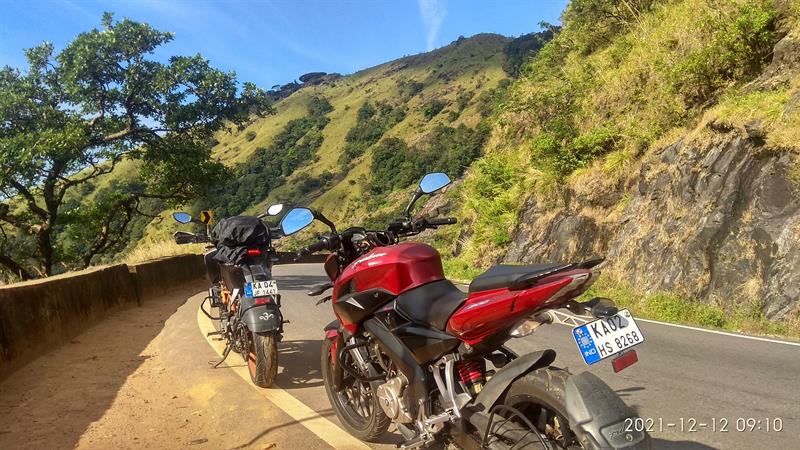 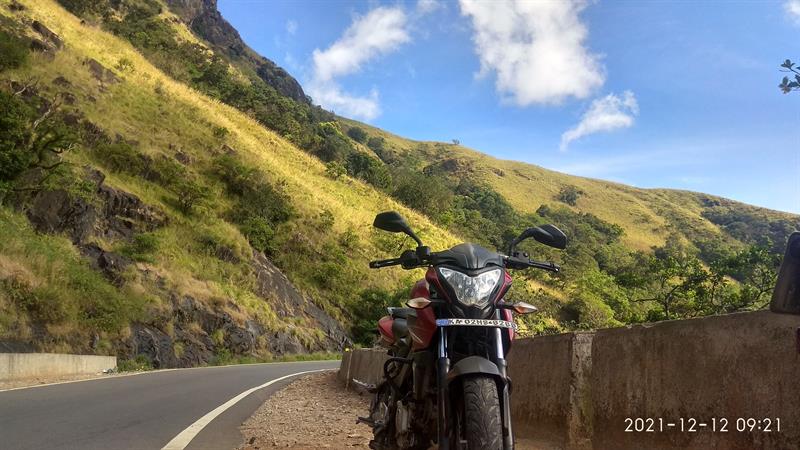 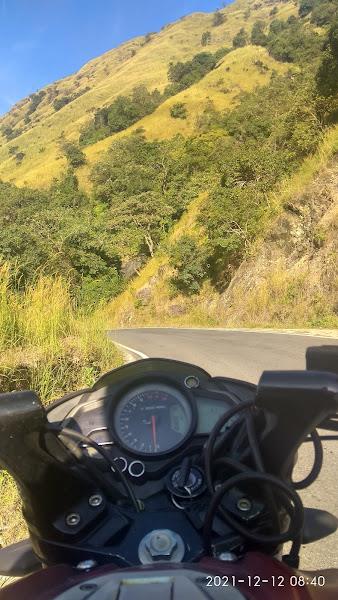 Had Darshana of Annappa Swamy Temple which is situated at the middle of this forest ride. Annappa Swamy is the Lord Who brought the Idol of the main Deity of Dharmasthala - Sri Manjunatha Swamy in Linga form. Legends say that He carried the Idol from Kadri Mangalore and brought here in a day on suggestion of Sri Vadiraja Guru(Who installed the Deity in Dharmasthala). 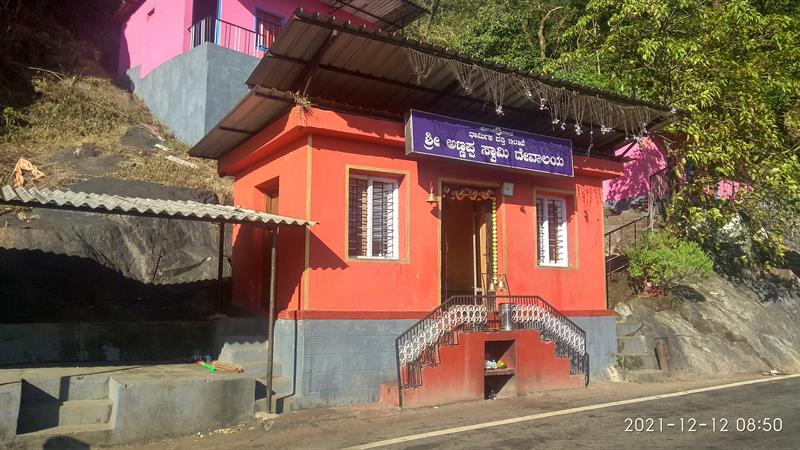 Further we stopped at another famous spot on the way - where multiple tiny waterfalls are formed during monsoon season and it is a scene to behold. Being winters, the water was comparitively less but we did enjoy at the spot discussing about our previous trip to the same spot(in monsoon) and how Heavenly Charmady scenes were at the time. 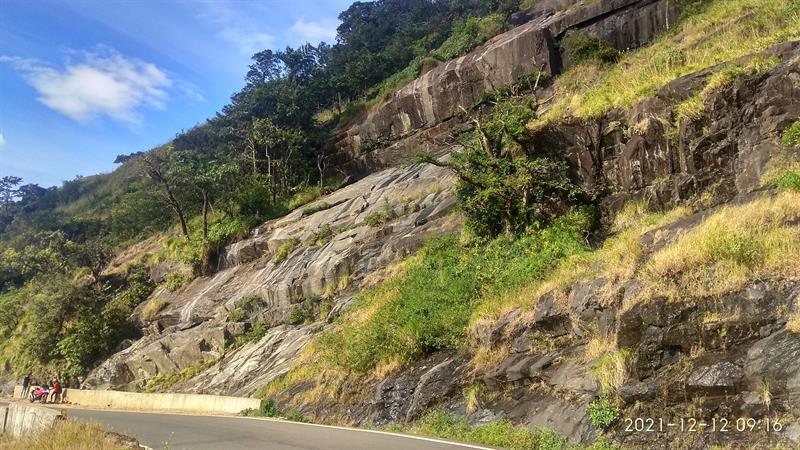 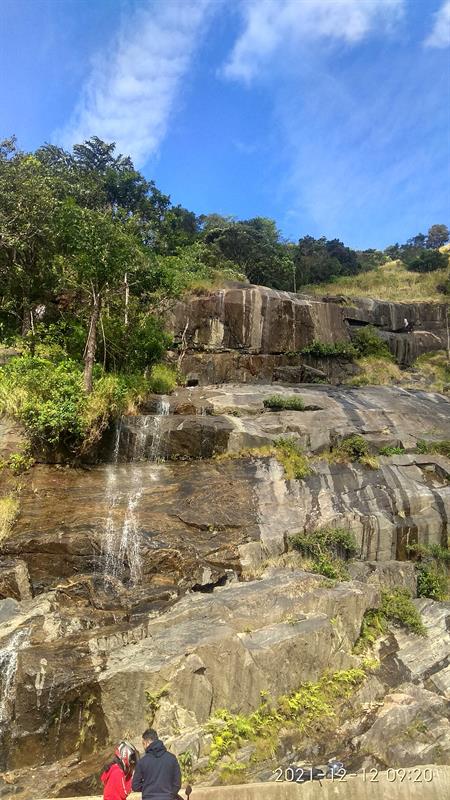 Reached Dharmasthala by 11 AM and had our lunch at the Temple in the Anna Prasada Hall, where thousands of devotees have food every single day. We were surprised by the crowd who had come in large numbers and the Darshana would take 5-6 hours as per the information we received from Temple admins. They also suggested to join queue later in the evening as the crowds would reduce by the time. Did not feel like returning back without Darshana and hence we decided to stay in Dharmasthala for the night and start back very early in the morning. We booked a room in Hotel Rajatadri - which is located near the new bus stand. After taking rest in the afternoon, we joined the queue in the evening and had Darshana within an Hour. Felt Blessed and we thought to ourselves that the trip was more meaningful. We had dinner at our Hotel and slept early.

It was Monday early morning and after getting fresh, I was ready with another spontenous plan. I wanted us to apply leave for the day and visit Kukke Subrahmanya and Sowthadka Temples on the way and reach Bengaluru by night. Harish liked the idea but was not in a position to take leave due to important office work. So the ride further was solo for both of us.

I decided to have Darshana of Lord Manjunatha Swamy again as it was an auspicious Monday. I headed towards Kukke Subrahmanya from Dharmasthala - travel distance of 54 Kms. 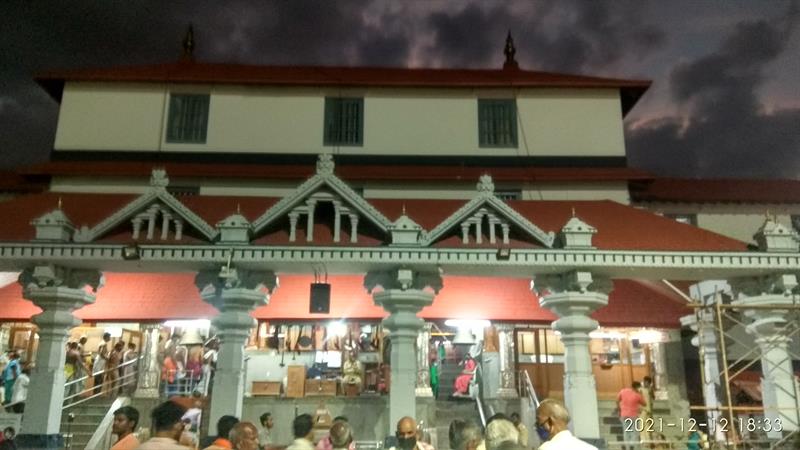 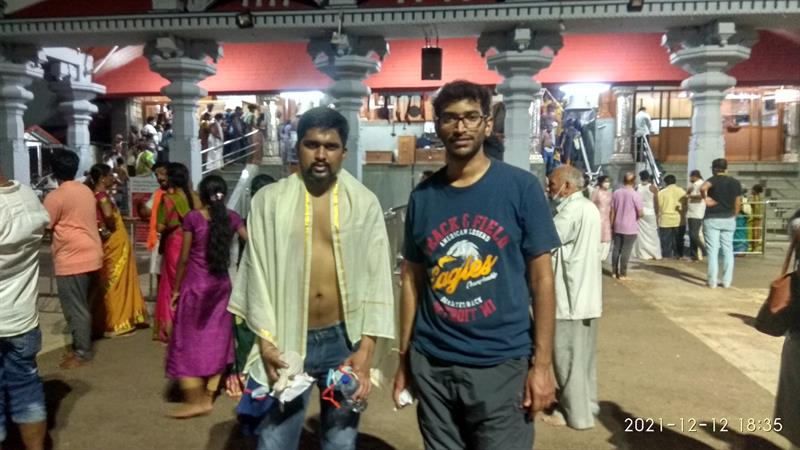 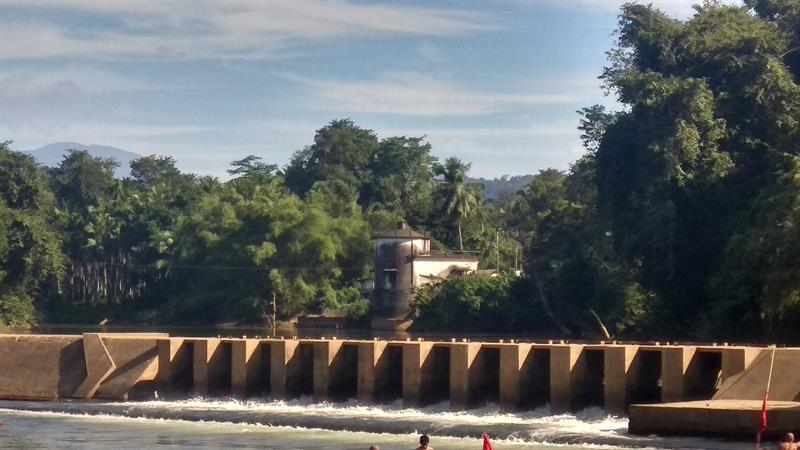 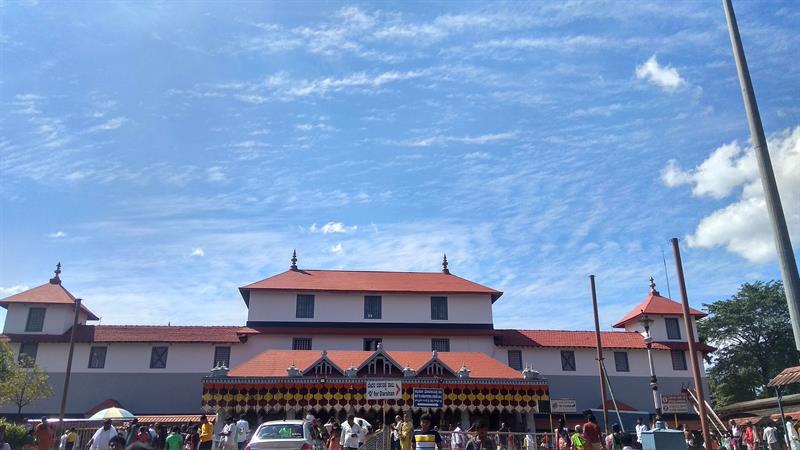 Visited Sowthadka Temple, which is a popular spot near Kukke Subrahmanya. The Temple is dedicated to Lord Ganesha and an interesting fact here is that it is an open roof Temple. As per the legend, there were many attempts to build the roof and it did not stand upon the command of Lord Ganesha. Had my lunch at the Anna Prasadam hall here. 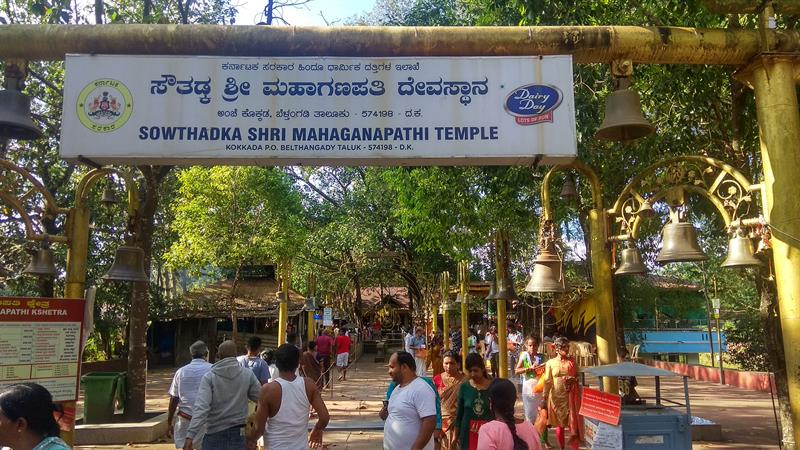 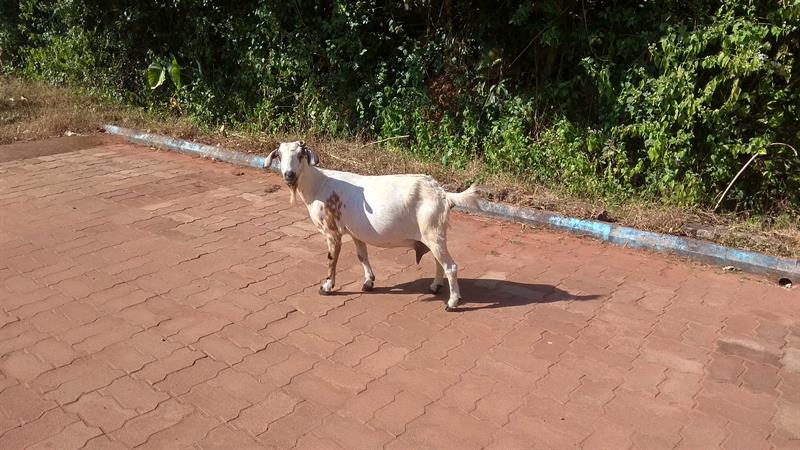 Reached Kukke Subrahmanya at 4 PM and had blissful Darshana of the Lord. It was 7:30 PM when I had finished eating some snacks at a Hotel nearby. 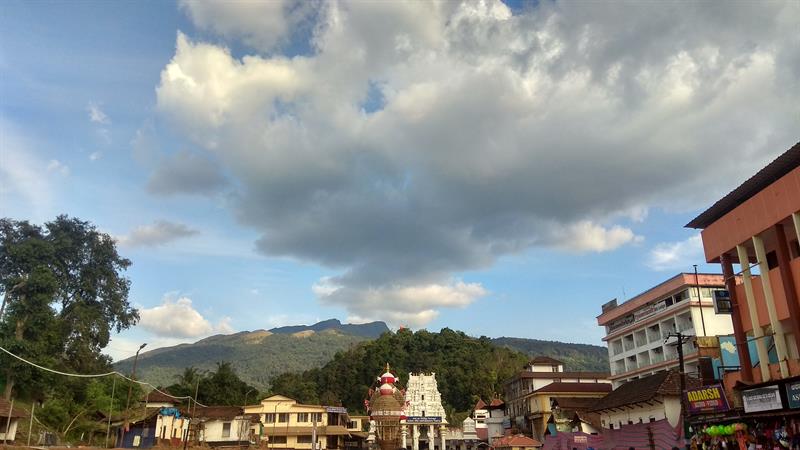 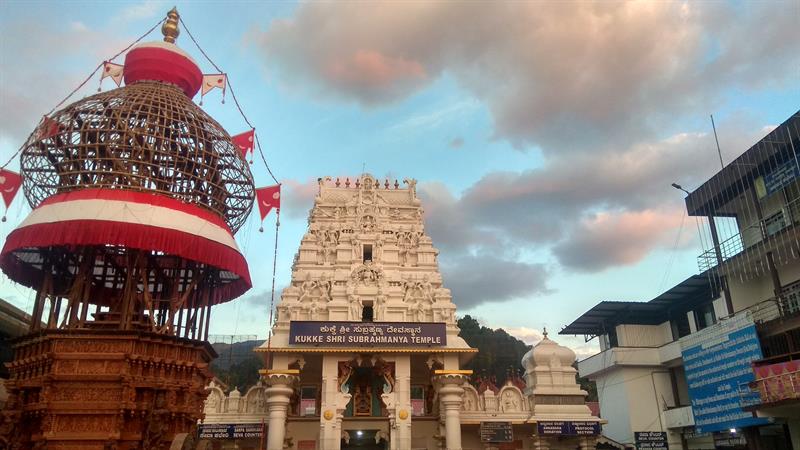 Started the ride back home in the night. Couldn't take the Bisle Ghat road as it was not advised to travel in the night because of thick forests and Elephants roam around freely at the time. Hence I took the Shiradi -> Sakaleshpura -> Hassan route. The strech before Sakaleshpura and towards Hassan were under construction and hence it was tough ride. It forced me to take an unplanned break for relaxing. Reached home in midnight after a ride in chilling cold weather and light drizzle. Had collected some memorable moments along this trip, which I will cherish.